The quick version (Scroll down for a more detailed version)
Mercedes are using the rear wing flap to hide 2 holes in the rear wing planes, these holes become 'active' when the DRS is in use.  Think of them as a switch either on or off (They are fluid switches).  The old McLaren 'F Duct' worked using the driver as the switch (covering the hole in the cockpit)
Lets move to the front of the car to better explain what's being gained from the system.  Whilst the DRS is off (flap closed) air enters through the nose hole at the front of the car and is directed down the wing pylons and out of the slot gaps on the underside of the wing.  This speeds up the airflow under the wing which in turn creates higher pressure above resulting in a net downforce gain, pushing the wing closer to ground.  Airflow is also accelerated downstream as a reward speeding up the rear diffusers effect.
When DRS is activated and the two holes are revealed in the rear wing the air that once went down the wing pylons is pulled past these outlets and drawn toward the rear of the car  (through the tubing).  This lifts the front wing out of it's extra downforce position thus creating less drag on the front wing and slows the effect downstream of the diffuser resulting in a higher top speed.

Detailed Version
Firstly lets start by showing you how a rear wing works, next time you're out in a car moving down the road, roll down the window, put your hand out the window horizontal to the ground (thumb first) and you will feel the air rush over and under your hand. This is how a wing feels when stalled. Now take your hand and turn it vertically (upwards), you will feel the air push against your hand, this demonstrates drag. Now modulate your hand between that horizontal and vertical position and you will feel the air pressure change around your hand. Your hand is now creating the same effect a wing does on an F1 car. Imagine your hand in say a 30 degree angle and now perhaps you can imagine the sort of downforce that is inflicted on the wing. Pop your hand out again at roughly a 30 degree angle, but this time open your fingers (even better if you can do the Vulcan live long and prosper sign like me) and this should give you an idea of the separation of the wings to create the 'DRS slot'.

Onto the Rear Wing I think firstly we must look at the channel down the outer edge of the wing planes. Mercedes, Ferrari, Red Bull, Sauber (only their top plane), Force India and Lotus all have these channels. They are used to create additional surface area in order to increase the wing length by using the endplate to imitate the wings it's attached to.
Mercedes have gone one stage further than the others, by adding a lip to the top edge of the endplate enclosing the corner and causing a pinch point loading the top surface of the endplate to it's frontal tip. This pinch point (area of high pressure) in my opinion creates cross directional downforce, helping with balance in corners flattening the tipped side of the car. (As the car turns in gravity shifts the weight of the car, lifting one side. So imagine a tightrope walker using a pole for balance this is what is happening on the rear wing. Air travels along the channel, pinched in the corner and sent spiralling forwards along the endplate causing more downforce across that section)

Moving onto the bit that everyone is talking about, the slot that is only visible when DRS is activated
As with everything Aero related balancing drag/downforce is vitally important for cornering and straightline speed.  The Super DRS / F Duct has an advantage in both area's but only when using the system (so less so in the Race)

In this picture you can see that the flow whilst DRS is closed is marked in Black.  The nose hole is feeding the slots in the front wing via the wing pylons.  This accelerated airlow helps to 'suck' the front wing down and creates downforce, the knock on effect is accelerated airflow inbound towards the floor and onward to the diffuser.  When DRS is activated (Red Arrows) the air from the nose hole is forced past the wing pylons and through the bulkhead meeting with the airflow from the airbox at the crash structure.  Here the air is pushed around the beam wing, up the endplates and out the P&S blow holes forcing more air across the bottom of the leading edge of the top wing plane.
The linking of these 2 systems allows for more downforce whilst cornering gained from the Front Wing which then accelerates the Diffuser.  When the DRS is activated this downforce is bled from the Front Wing, Diffuser and Rear Wing.  Now if only the Mercedes was using the exhausts to promote the Coanda effect like Red Bull and McLaren..... 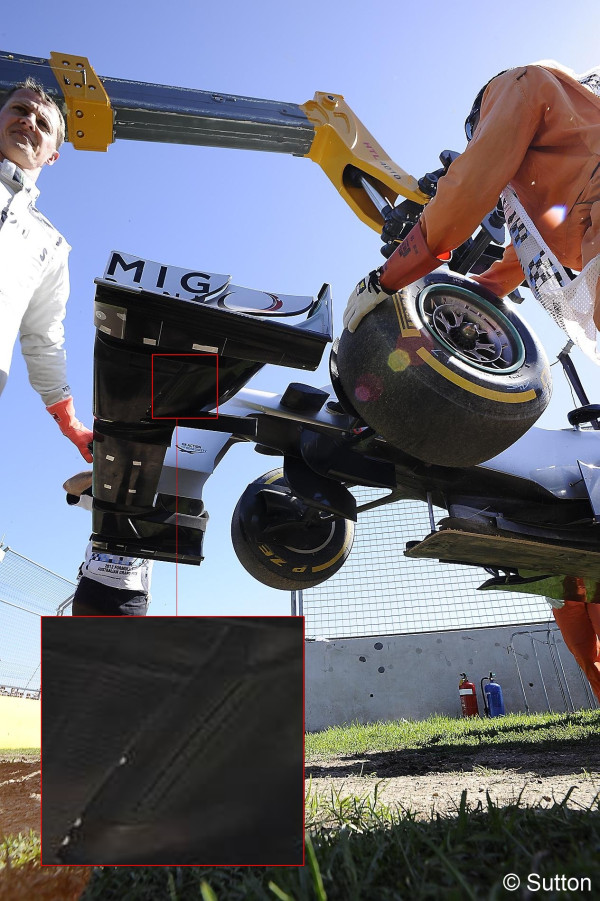 When Michael went off the circuit in Melbourne he went to great lengths to stop photos being taken of the underside of the W03
http://youtu.be/c5gjPrb43LA
Tagged
Newer Post