After each GP i provide a Technical Roundup for www.finalsector.co.uk however I felt that the latest updates from Red Bull required a more expansive analysis of it's own.  I looked at the main element of their upgrade at the previous article http://somersf1.blogspot.co.uk/2012/06/red-bulls-tunnel-vision.html
This article however moves to further explain both the reason for the Tunnel and the other components that go to exploit it's potential. 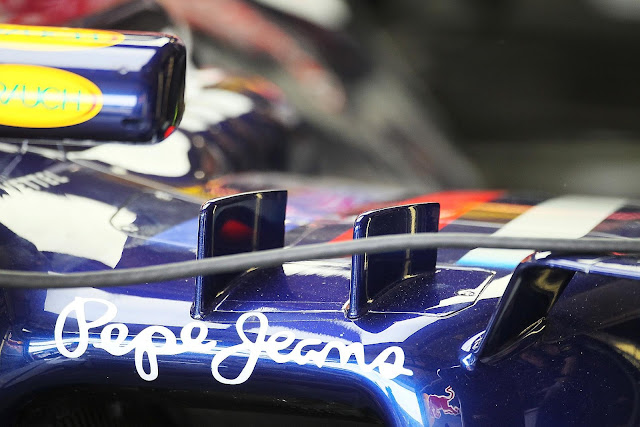 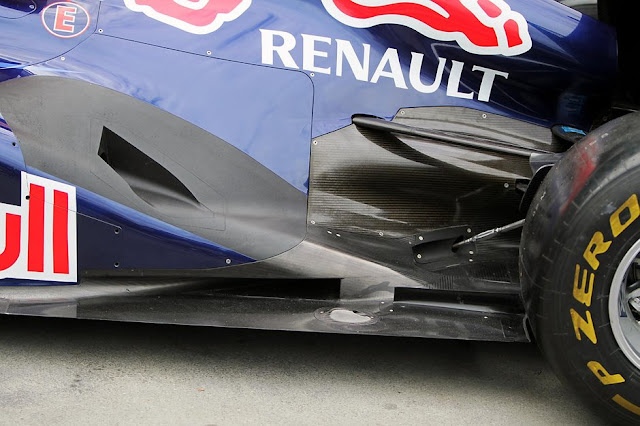 Above: RB8 during Australia at the start of the season

The original Sidepod Tunnel concept had a cutout in the sidepod ramp with a linear height of 50mm from the floor which utilizes the minimum radius rule. This concept had the Tunnels airflow exit just aft of sidepod ramp in order try and assist the airflow toward the coke bottle region.  Red Bull have experimented with other iterations exiting inside the engine cover in the same way their new tunnel/duct system works but have always had a problem with airflow attachment. 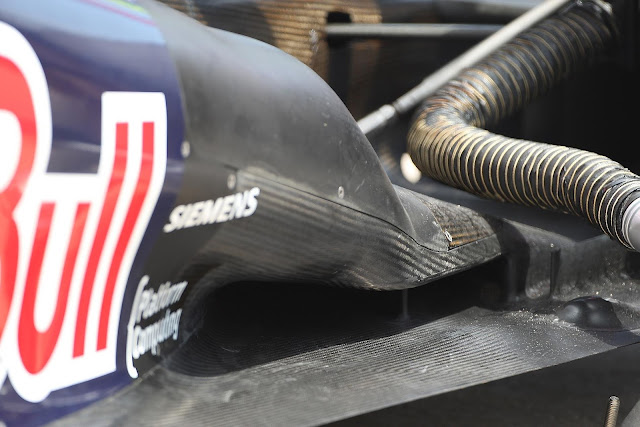 Above: RB8 configuration used in Valencia

The new version (above) continues to use the 50mm radius rule at the rear portion of the tunnel but is separated from the the frontal section of the Tunnel by a vertical section of bodywork. Forward of this seperation the height increases and reminds me of the Ferrari Acer Duct in the way the bodywork hangs over the floor. These two tunnels combine and merge atop of thefloor in ducting which exits at the rear of the car (See Below). 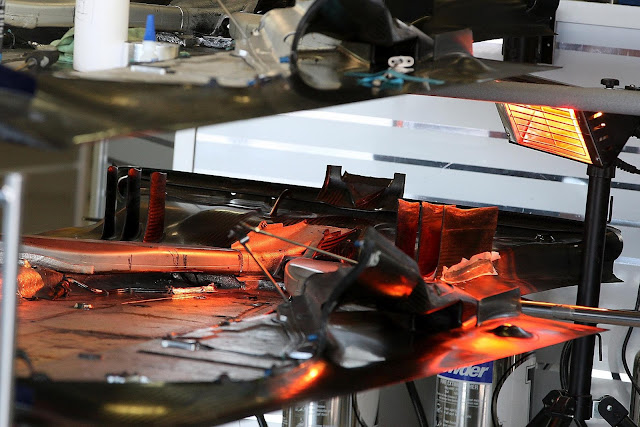 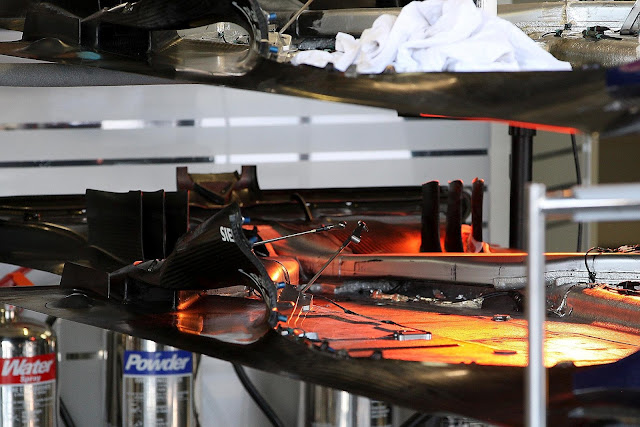 Above: These pictures shows the floor of the car, the silver ducts are the tunnels that lead from the Sidepod entry to either the outlets in the the engine cover at the rear of the car (Coke Bottle Region) or to the starter hole. 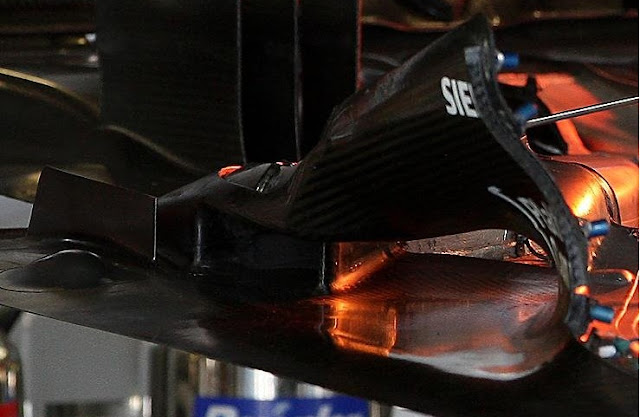 Above: Tunnel & Duct Close up

Two theories are emerging in regard to the nature of the 2 ducts and whether the larger tunnel entrance combines with smaller entrance to form a larger airflow pattern as described below:

The image above shows that Tunnel 1 has a step as it enters the duct, this allows the airflow to merge with Tunnel 2's airflow and rotate the stream. This creates a spiraling vortex inside the ductingspeeding up the airflow and removing an element of the boundary layeras the air speeds through the tunnel. The tunnel acts like a Venturi tube with the entrances being the inlet, the duct speeds up the airflow as the duct creates the 'throat' and the lower engine cover exit or starter hole isthe outlet. (See Image Below)

Above: Flow Diagram of a Venturi Tube

The other alternative is that the first tunnel entrance simply merges with the airflow from the engine cover and exits out of the lower cooling hole.  Leaving the later tunnel entrance to flow airflow through the duct and out of the starter hole.

This Tunnel section adds a new dimension to the airflow pattern giving the airflow from the exhaust plume a further means of interacting with the diffuser. Without the means of a better way of describing it, this concept adds another deck. Although not in the same direct way as the original DDD's (Double Deck Diffusers) as it's not part of the diffuser itself, it will increase the effectiveness of the diffuser. 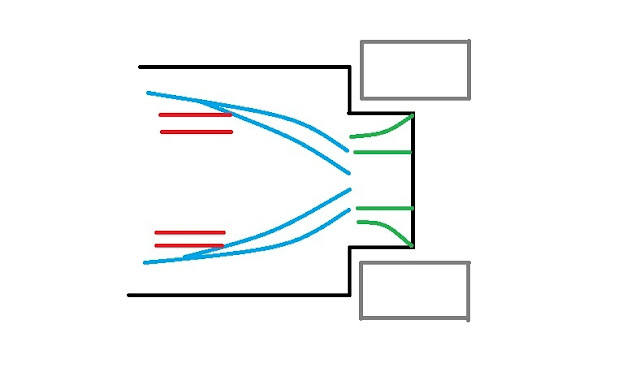 Due to the way the 3 flows interact (Diffuser, Tunnel & Over bodywork) the diffuser is sealed much further outbound than has been possible so far this season. Being able to seal the diffuser is imperative to the way in which the tyre squirt interacts laterally with the diffuser flow, providing more balance for the driver. Red Bull are further managing this effect with diffuser strakes that turn outward, this allows the flow emitted from the tyre to be straightened and minimize the tyre squirt into the diffusers main airflow channel. If you have a look at my crude representation above I have marked the diffuser area (strakes) in green, the tunnel(s) are shown in Blue and the exhaust channels are marked in Red.

As we can see below from the Australian spec RB8 the original intention was that the airflow from the exhaust and tunnel would converge above the floor and exit through the centralised starter hole. 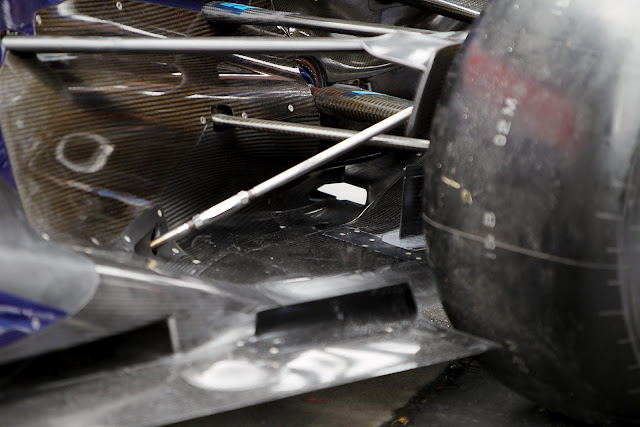 Above: Melbourne configuration with the starter hole exposed 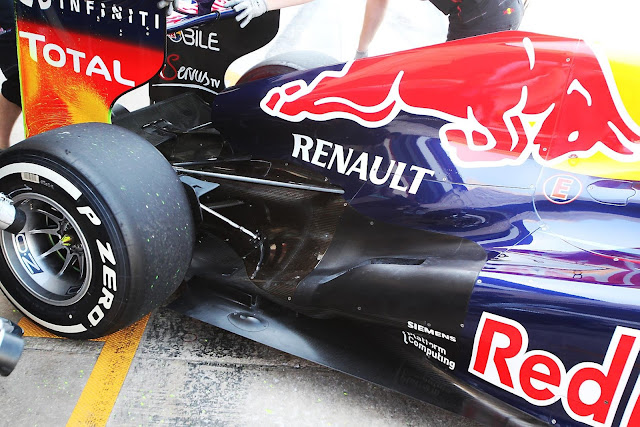 Above: Shows the rear end of the RB8 covering the starter hole 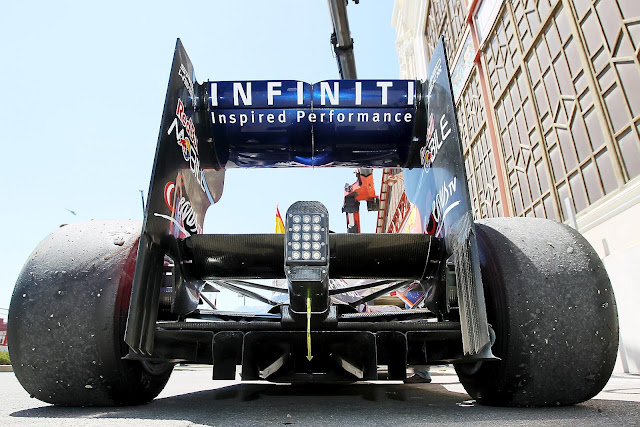 Above: Sebastian Vettel's stricken RB8 in the pitlane having been removed from the circuit

The other aspect we must look at for Red Bull is their usage of a cowl for their driveshafts, they have covered their driveshafts in the same way all the teams do with the suspension components.  This is not a new feature for Valencia but the effectiveness of the new Tunnel/Duct system is utilised with the combination of this component. This has a many effects on the airflow:

I believe that all of these factors in combination are the reason for Red Bull's leap in performance.  They also tie in to the decrease in tyre wear that Sebastian and Mark had at Valencia.  More rear downforce = a more stable rear end and will help reduce tyre degradation.  This current configuration has only been developed due to Adrian Newey and Red Bull's determination to make the original concept work, meanwhile they have inadvertently come across a much stronger version of the original concept.  If we see the strakes, floor and driveshaft cowls as one unit they give the appearance similar to that of the diffuser below which should enhance the diffusers airflow profile.   I hope for the sake of the close championship battle we are currently seeing that the other teams already have similar concepts in development.  As this in my eyes is not simply a one off for Valencia and will continue to provide Red Bull with a large gain over the other teams.