AmuS and Giorgio Piola recently ran a piece on Ferrari using a third pedal in their cockpits in order to activate/deactivate DRS. Many of you may believe that a third pedal was outlawed when McLaren used such a technique in 1997 on their MP4-12. The FIA does not specifically state a third pedal is not allowed in the regulations however the component used by Ferrari is a button rather than a pedal.

So why a foot operated button instead of the usual steering wheel button? As always in F1 the reason is mainly found in an aerodynamic advantage although it's a handy operation for the left foot to do whilst not braking too. 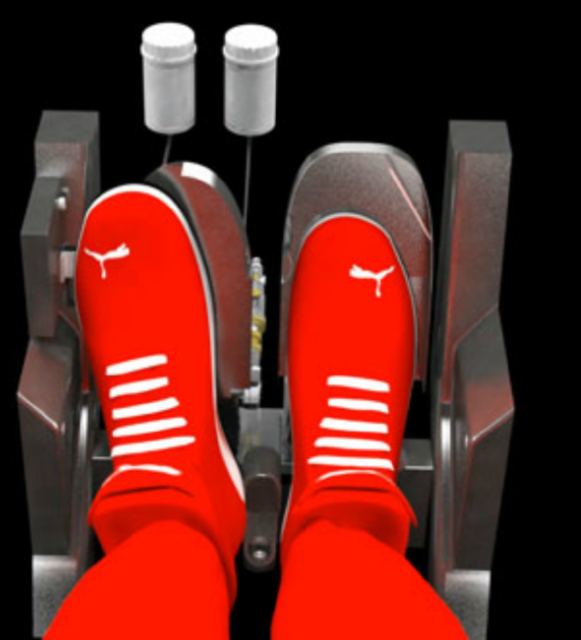 Above: Illustration from Giorgio Piola on the drivers action whilst not braking

DRS deactivation is either completed by re pressing a button or when applying the brakes, with the Ferrari system when the driver lifts his foot from the DRS button to brake the Rear Wing Top Flap will start to return to it's normal position creating downforce. This time differential helps to smooth the transition period and re attach the airflow before the braking phase begins. 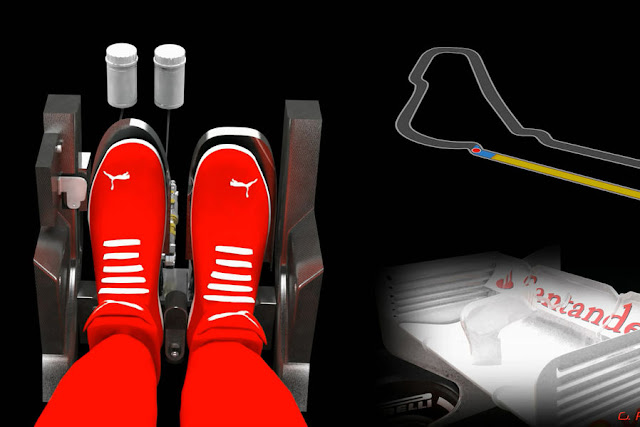 Above: Illustration of Giorgio Piola's showing the additional DRS pedal/button exposed as the driver enters the braking phase

As teams push to extract more and more performance from DRS they know they are working with finite limits that can affect the cars stability for the drivers in the braking phase. This is even more crucial this year as the teams have lost a chunk of downforce from the EBD ban and strive to extend the Pirelli tyre life.

James Allison of Lotus has already stated that they will run a new Rear Wing around the streets of Singapore and from his statement I would consider it a sign they too may run a similar system:

'The new rear wing operates at the same downforce level as our Monaco spec rear wing, but with a better DRS delta. This means that this wing has better DRS switching from its maximum drag to its reduced drag settings. We believe we’ve been able to produce a rear wing which is at the higher end of the downforce spectrum but still able to allow the lion’s share of the DRS potential which is more difficult to achieve at high downforce levels. It will be interesting to see how it works on track.'