Suzuka is another of the classic circuits that the drivers love as it represents a challenge that some of the newer circuits fail to replicate. Before the weekend even got into full swing an article from AMuS sparked a furor surrounding McLaren and Red Bull's use of tilting front wings. McLaren have been using this type of flex/tilt for at least a year but after Singapore it emerged Red Bull were now utilising the advantage too. The FIA were keen to stamp out any advantage that may have been being found from this and so adjusted their load tests for Suzuka. I wrote a piece of the subject during the build up to the weekend which can be found here: http://somersf1.blogspot.co.uk/2012/10/the-flexi-front-wing-debacle-continues.html

McLaren came to Suzuka with a further refinement to their Sidepod Wings, raising their leading edge slats to allow more airflow underneath the wings. The re-profiling of these devices is an inevitability as the team further understand how to influence the airflow they produce for the downwash. 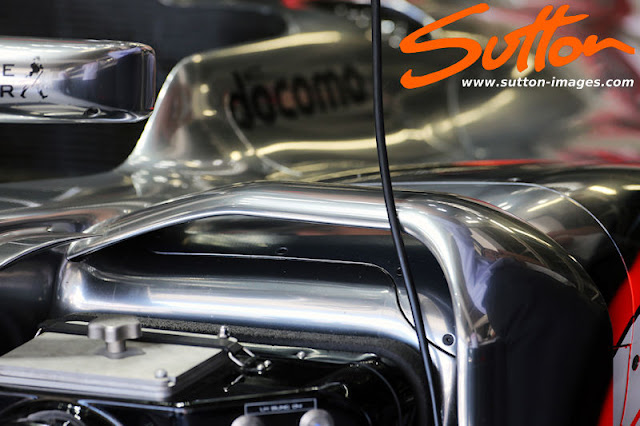 McLaren over the last few races had also employed some holes in the outer 15mm free zone of the main planes of the their Rear Wing these have been deleted from the Suzuka wing. 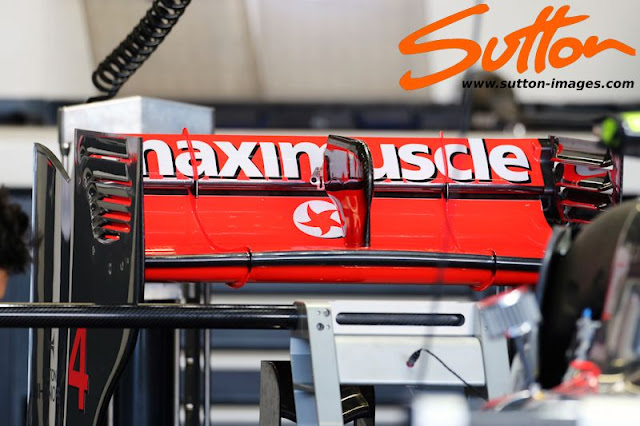 Ferrari, after showing an amazing development rate since the start of the campaign the Italian team's upgrade packages are starting to wain. The team have understood for some time that their processes may be flawed and this doesn't help when they have their work spread amongst their own and 2 other wind tunnels. They have finally come to the decision to close their own tunnel and will have a new one ready by 2015 until such point they'll continue their work elsewhere.
Ferarri tested several Rear Wings in Suzuka with the race wing used 5 large horizontal louvres in the endplates that curved toward the wing planes. As we know these Louvres are crucial in the distribution of high and low pressure on the wing planes and so great attention is paid to how these designed & orientated with each circuit in mind.

Above: Test Rear Wing with 2 Endplate Louvres, this would increase downforce at the deficit of drag.  Notice on each design the strakes at the bottom of the endplate also differ in design 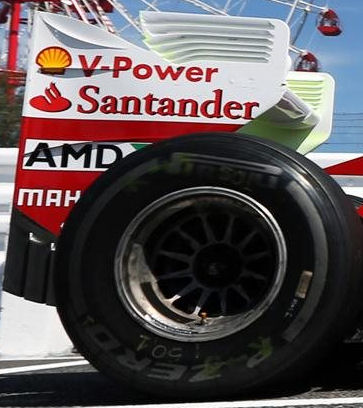 Above: The Louvres on this particular wing accentuate with the profile of the Main Plane and Top Flap 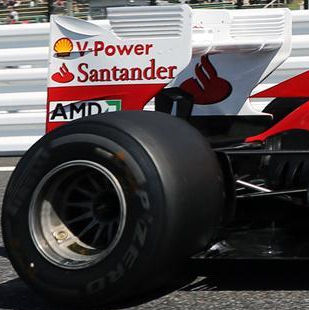 Above: This 5 Louvre design is very reminiscent of the design ethos used by McLaren and extends the louvre behind the top flap to help reduce tip vortices. This is the design that was used during Qually/Race 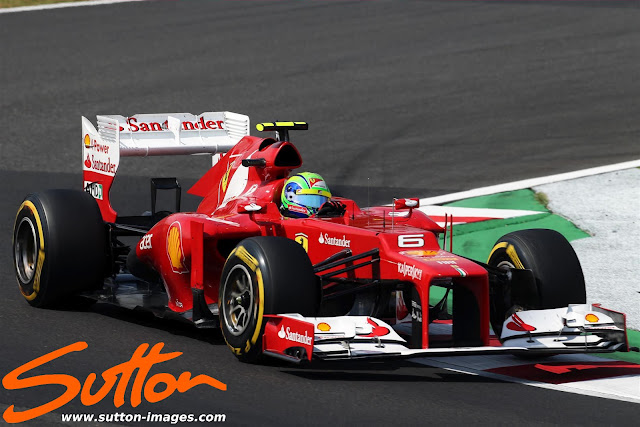 Above: Ferrari once again changed the profile of the top flap on their Front Wing

Red Bull having already passed the rigors of a revised Front Wing load test flew in a new Front Wing that was tested in FP3 and used during qualifying/race.  This featured the pelican style nose we have seen on the Lotus & Williams already. 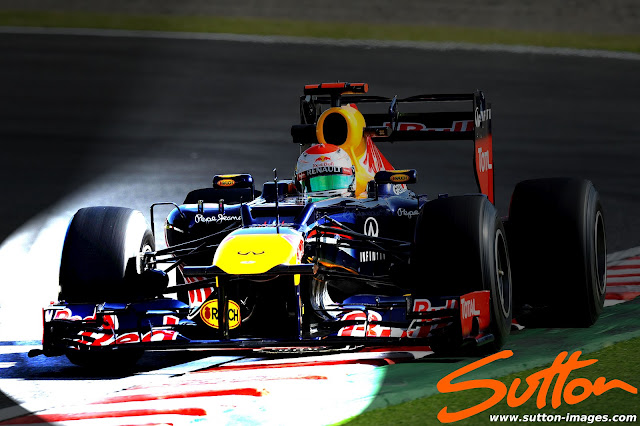 The team also presented a new Rear Wing which features bulky rear end plates along with a large end fence to the top flap. I'm sure more evidence will present itself in due course but just as McLaren appeared to be presenting an aperture when their DRS is activated so now does the RB8. I will post more on this as and when I can find the relevant photos. 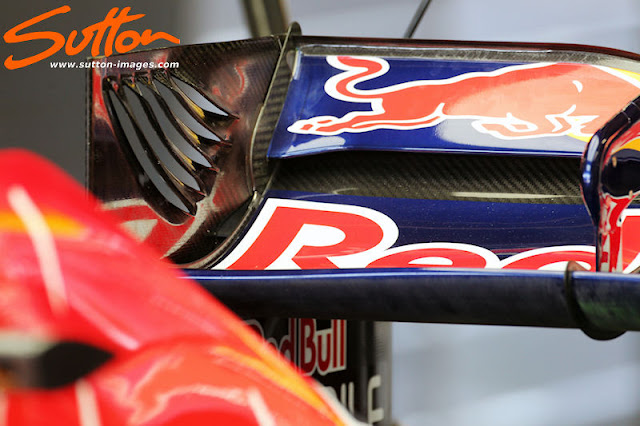 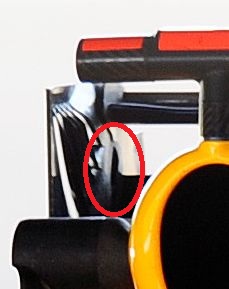 Sauber continued their development with revisions to both the Front and Rear Wings, in the picture below (New wing at the bottom) you can see how their 4th dog leg tier has been altered in profile at the top (Top Right). The main cascade has had it's outer section straightened and has a smaller cascade perched on the end of the larger main one. (In this picture the top flap has yet to be added on the new wing) 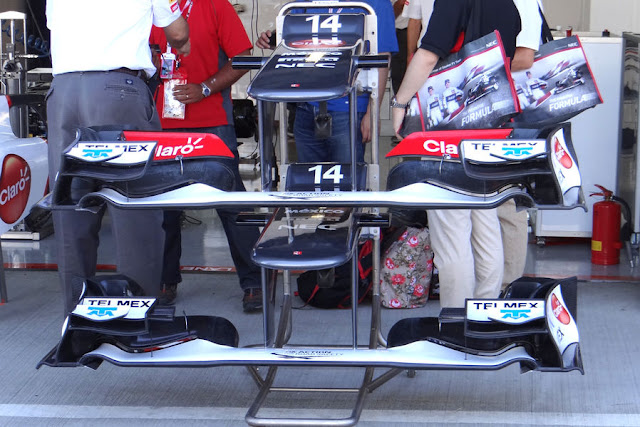 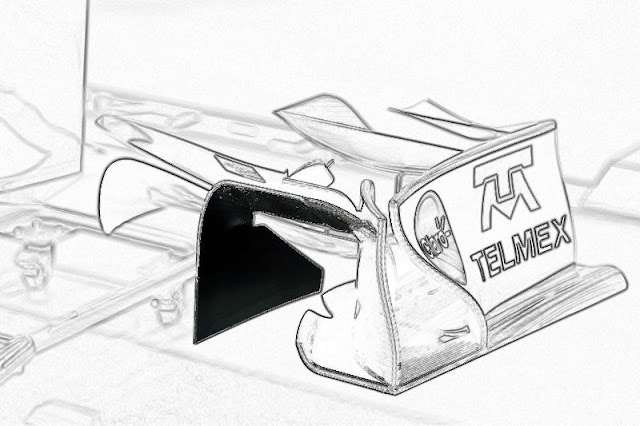 Above: This picture is of the old configuration Wing from behind however it helps me to show you the Dog Leg Tier I talked about above.  The Dog leg is formed from the endplate and arches over to create both a fourth tier and air control strake for the underside of the Wing. 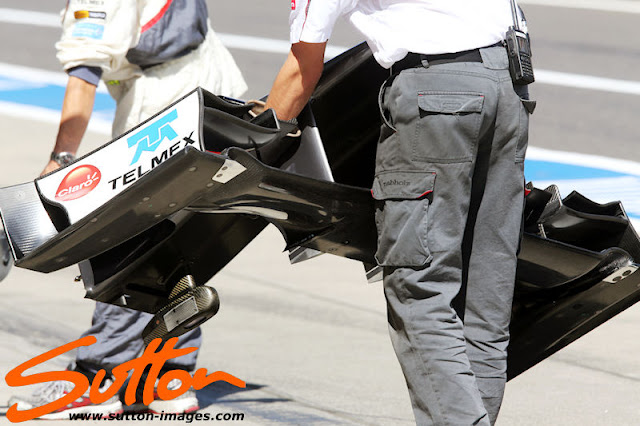 Above: The new front wing from underneath

At the Rear Wing the team have employed a new set of strakes at the bottom of the wing. These strakes influence the airflow out of the car but by doing so can also start to influence the air travelling toward it. Manipulating the airflow in this region can help to extrapolate performance from the diffuser and brake fins that's airflow travels within the region. 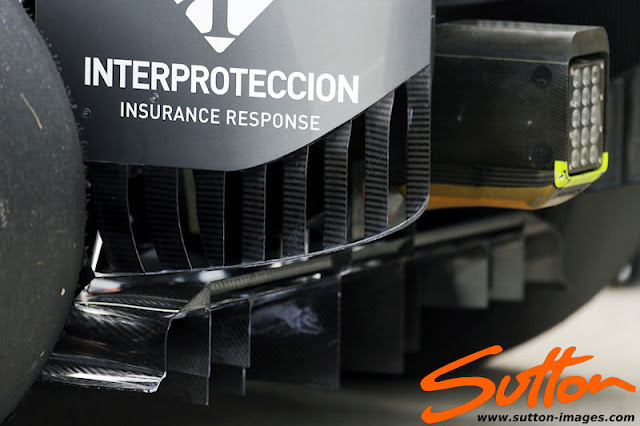 Conversely the team also decided to go back to a design more like their exhaust ramp style exhaust rather than the McLaren style 'coanda' exhaust outlet here is Suzuka.  I feel this may be a move based on their original design being within the first 4 races and with the torque maps now within a tolerance of 2% of this their original spec may be quicker.  (They used this configuration in Singapore also but I managed to miss it)
It is also worth considering that Red Bull's exhaust configuration is essentially the ramp style design albeit on top of the Tunnel system. 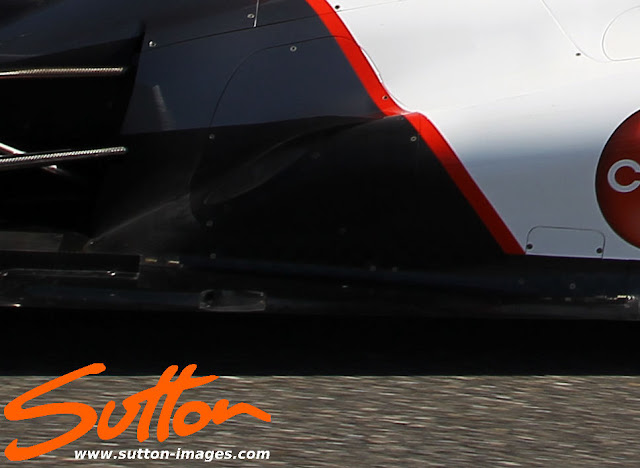 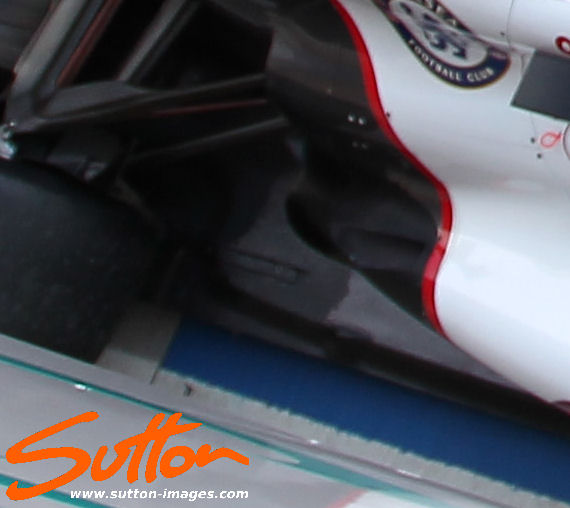 As a reference below we can see their original ramp design 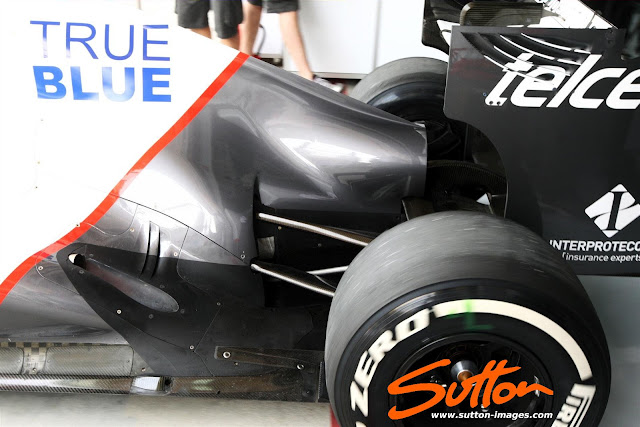 Lotus once again used the Friday practice sessions to assess their 'DRD' on Kimi's car but failed in their attempts to tune the device sufficiently for the Suzuka circuit. Whilst I can understand their efforts in getting the device added to the car could give them a performance boost it seems Kimi is missing valuable setup time whilst attempting to tune it. Lotus find themselves in an unfortunate position now having thrown heaps of time behind trying to configure DRD during practice sessions they may have hindered Kimi's oberall race weekends. With Romain not being employed in the test phase of DRD it leaves Kimi at a disadvantage even to his team mate and I wonder how much more time the team can afford to put behind it's development. 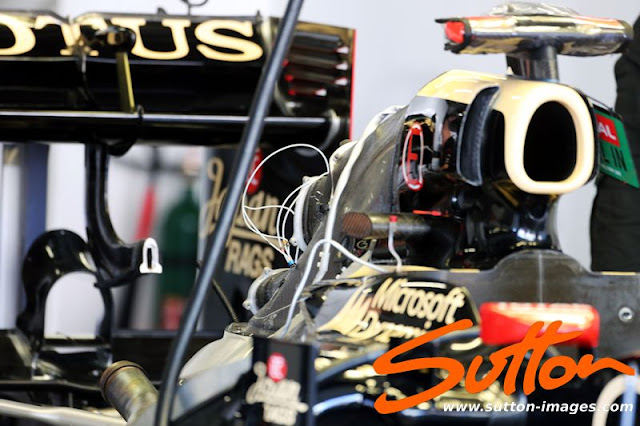