Red Bull's development curve has always been rapid and with the team struggling at the start of the season they developed their car rapidly.  Valencia proved to be a landmark in resolving their issues with the Exhaust Ramp/Cross-Under Tunnel configuration and had it not been for the Safety Car period and ensuing Alternator failure for Sebastian Vettel it would have laid the scene for a landslide victory.  Since then the other teams development paths have yo-yo'd the results but Sebastian remained resolute with only Monza as the blip in an otherwise great string of results.  With the 2012 season drawing to a conclusion and Ferrari faltering in their application of upgrades Sebastian once again leads the Drivers Championship & Red Bull the Constructors.  This is in part due to the fantastic job done in Milton Keynes with solid performance upgrades giving the team the best opportunity to flourish.

Adrian Newey and the design team at Red Bull are not afraid to carve their own path but after what they considered to be a few average results they reportedly followed McLaren with a Front Wing design that tilted backward at speed.  McLaren had been using this style of Wing since around the same sort of time as the original Flexi Wing debacle but with Red Bull adopting it at Singapore the FIA decided to step in.  For Suzuka the FIA adjusted the Front Wing loading tests at Suzuka. (My Article from the time further explaining it's origins and purpose: http://somersf1.blogspot.co.uk/2012/10/the-flexi-front-wing-debacle-continues.html 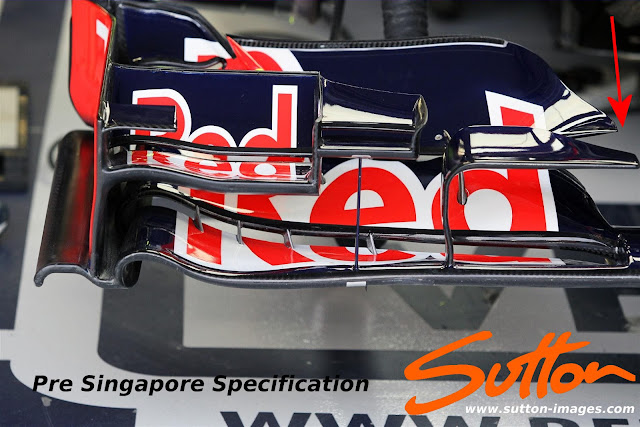 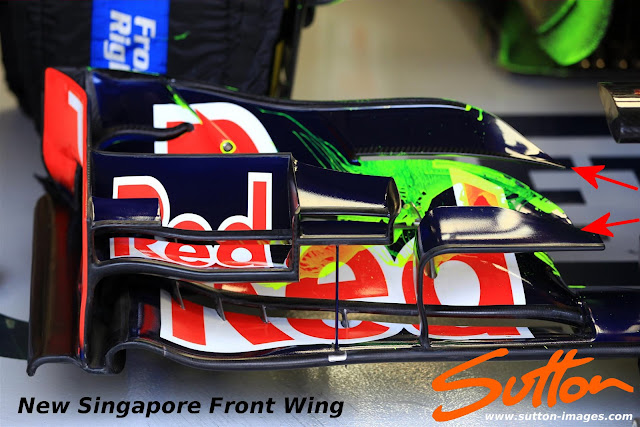 Above: I have added arrows on the image above so you can tell the difference between the new and old Top Flaps

For Singapore Red Bull flew out a new Nosecone/Front Wing which represents a change in philosophy, the Top Flap now separates into two sections making the Wing 4 tiers as opposed to 3. The tips of the Top Flap in combination with the R Cascade in front of it are designed to vorticise the airflow leading to a more energised flow being dispatched along the car.


In Tandem with these Front Wing changes the team also revised the nosecone of the RB8 utilising a 'Pelican' style underbelly to the nose whilst extending the tip of the nose and also placing the FOM Camera's into a more forward and lower position.  Red Bull have adopted the hammerhead camera placement since Belgium tidying up the area between the Front Wing Pylons and allowed for the introduction of the Tilting or Rotating Wing and 'Pelican' underbelly.  Like most teams Red Bull originally used the camera's in a position behind the central section of the Front Wing to attenuate the airflow's characteristics. This is important as the central portion of the Wing is an area subject to specific rulings set out by the FIA in order to the limit the amount of downforce/effect generated here however with a Lower Nose tip and 'Pelican' underbelly the effect has been altered higher up. 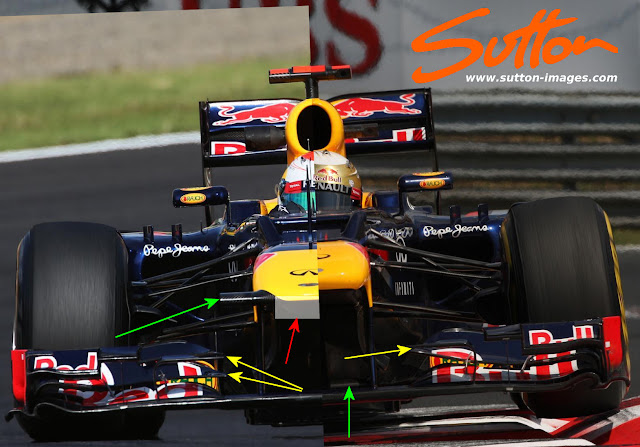 Above: In the image above I've overlayed a picture of the RB8 from Hungary (Right) with an image from Suzuka. The Green arrows depict the placement of the FOM camera's, Yellow arrow's show the difference in the Top Flap and I've lightened the area under the nose on the left and marked it with a Red arrow to show the 'Pelican'. (The image will never give a 100% accurate impression of the as they are taken from different distances/angles and the car is in different stages of inertia but I feel it gives an idea of what you should be looking for)

The 'Pelican' nose augments the airflow in a region that is essential this year as with EBD gone getting airflow under and over the floor in the correct way makes a big difference. As we know this is the primary reason for the 'Step' noses in 2012 as the teams try to drive as much air under the car to the floor as possible.

For Korea the team made revisions to their exhaust package and bodywork in order to further utilise their ramp and tunnel combo. Internally the team went back to an exhaust featuring a resonator chamber and visually it would appear that the size of the resonator chamber has been increased. 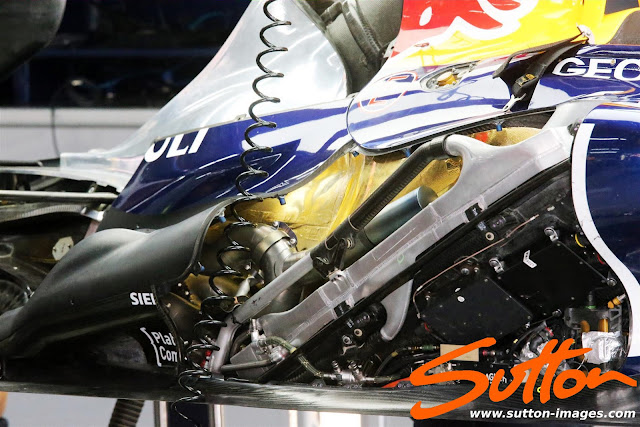 This is coupled by the shortening of the Exhaust ramp and re-profiling of the Cross-Under Channels. Sebastian trialled the new configuration on Friday along with Mark but switched to the usual lengthened style claiming the balance wasn't right. However both drivers ran the new configuration for qualifying and the race.
These new bodywork changes were also met with engine cover re-sculpting and rear suspension alterations to further take advantage of the additional downforce being created. 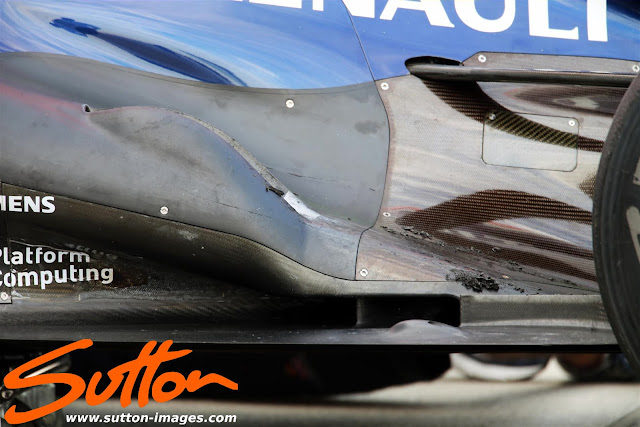 Above: This image from Suzuka depicts the Exhaust Ramp / Tunnel Cross-Under that the team have had in use for quite some time 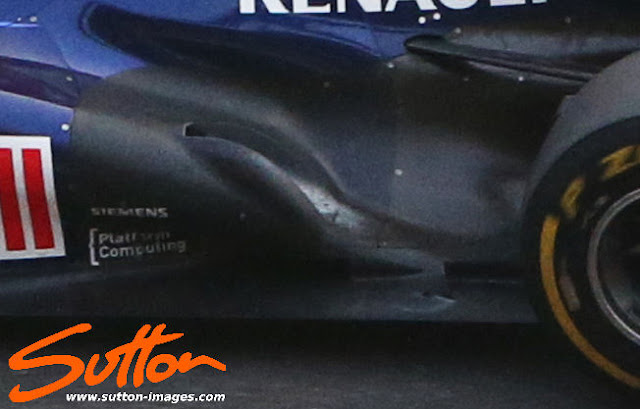 Above: This is a close up of the RB8 of Sebastian Vettel's as he crosses the line to take victory in Korea.  When compared with the picture above it you can see how much shorter the ramp has been made and how much deeper the forward tunnel engages

The new Exhaust Ramp shortens the Sidepod by around 6 inches in profile and now has the ramp finish ahead of the rear wheel Vertical Floor Strake instead of alongside it. This allows for more 'Coanda' style manipulation of the airflow coming around the Sidepod, aiding in turning the airflow into the Tunnels and any errant airflow converging into the exhaust plume more elegantly. 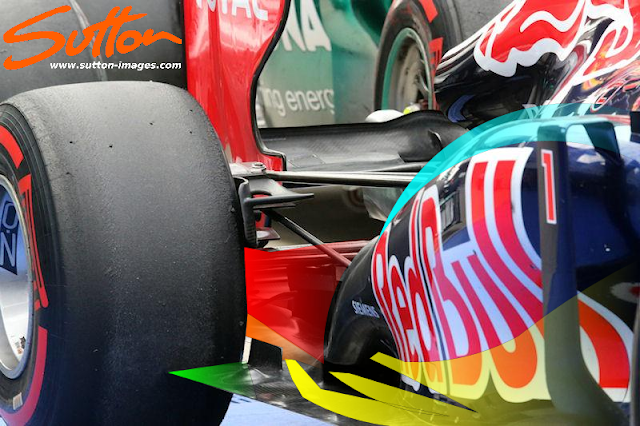 Above: As an idea of how the airflow is being affected by these Sidepod revisions I've done a very basic overlay. Light Blue is the downwash which is attracted by the exhaust plume and converges with it (marked in red) With the Sidepod now running short of the Vertical Floor Strake it allows some of the airflow that doesn't enter the tunnels to be attracted around into the exhaust plume (marked orange) This cleans up the airflow in front of the tyre (marked Green) reducing the amount of 'Tyre Squirt' that would normally impinge on the diffuser.

Red Bull's RW-DDRS (Rear Wing Double Drag Reduction System) is yet another push by the team to finish the season on top. Secondary use of DRS has been banned by the FIA for 2013 and so most teams were believed to have abandoned it's development this however has not stopped Red Bull and discuss this further here: http://somersf1.blogspot.co.uk/2012/10/red-bull-rb8-rw-ddrs-plausible.html 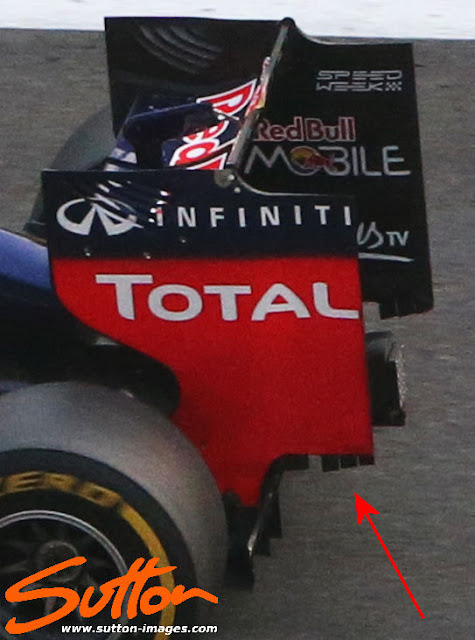 Mentioned in the RW-DDRS article above but perhaps worth noting here alongside the other developments is Red Bull's reduction of their Rear Wing Endplate Strakes (Above). These Strakes help not only guide the airflow aft of the car but also help to manipulate the flow ahead of them so their reduction in length indicates how much more airflow is now being exited centrally.

Lastly here is a 3D video created by Giorgio Piola for the AMuS website on some of the alterations I mention above: