Whilst some of the teams elected to carry out their Young Drivers Tests earlier in the season we have Red Bull, McLaren, Lotus, Sauber, Toro Rosso & Caterham all taking part in a 3 day test after the Abu Dhabi GP.

Although the Test carries the 'Young Drivers' title teams can use their experienced testers behind the wheel as long as they haven't competed in a GP weekend. This is why we find Gary Paffett (31) and Nicolas Prost (31) behind the wheel of the McLaren and Lotus respectively. These drivers are used due to their technical nous and relative time spent in the simulator. Meanwhile Red Bull, Sauber, Toro Rosso & Caterham (latterly followed by McLaren with Magnussen) are happy to try out the new breed of drivers.

The test days provide not only the opportunity to assess future talent but also offers the teams time to look at setups and aerodynamic components that may not be able to be covered in the usual Free Practice programme.

In Sauber's assault towards Mercedes for fourth in the constructors it's been important that the team score regular points and so less risk is taken in testing new components throughout their Free Practice time. The team decided to debut their own version of a DRD (Drag Reduction Device) with Frijns on the first day of testing in Abu Dhabi to assess the devices potential for integration into their 2013 challenger. 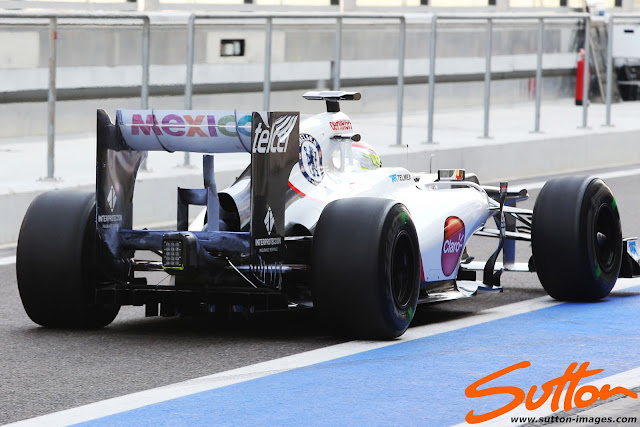 The Device bears more resemblance to the Mercedes counterpart (of which Mercedes have continued to test during FP1 at the last few GP, the team are however coy on it's usage, stating that it's unlikely it will feature in the W04's design)
Unlike the Mercedes & Lotus DRD's Sauber haven't added inlets around the roll hoop but instead it would seem two periscope ducts have appeared on top on the bulkhead. (Credit @F1Talks) It seems Sauber may be using these 2 ducts to feed the airflow channel encased within the Engine Cover that leads to the Periscope.

Like Mercedes we can see that Sauber's version doesn't meet with the underside of the Mainplane most likely to distribute the airflow it creates over a larger surface area. As I discuss in my DRD article the Mercedes and now Sauber devices are more likely keyed to produce more downforce from the Rear Wing by making the Mainplane more efficient at higher AoA's (Angle of Attack) 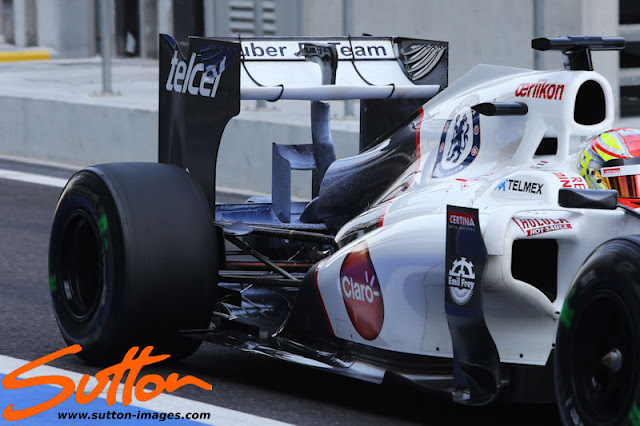 Red Bull have the impressive Antonio Felix Da Costa behind the wheel of the RB8 for the first 2 days of the test. Da Costa, I believe could be the next big name to break through as part of the Red Bull young driver programme and think it could happen as early as late next season if either of the Toro Rosso drivers fail to impress. The young Portuguese driver who has showed his talents in both GP3 and WSR this season completed the most laps on day 1 racking up 79 laps in the RB8. His fastest lap was merely 0.066 from the fastest lap of the day recorded by Magnussen in the MP4-27 but as we can see from the pictures below the team were using a Pitot Tube Test Device on the car for some of his running. 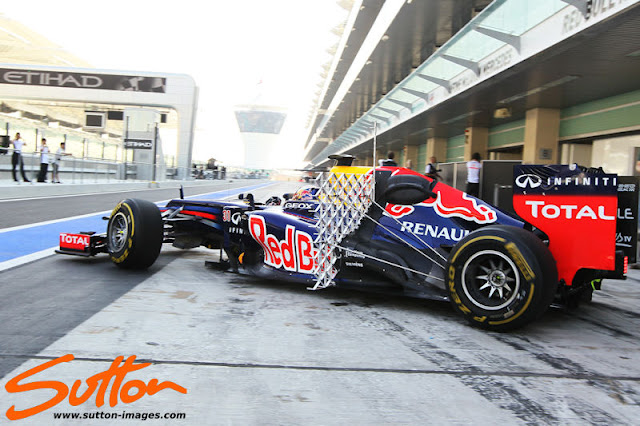 Luiz Razia is no stranger to Young Driver's tests having done the same for Virgin Racing in 2010 and Team Lotus in 2011. He was also signed as a test driver for Team Lotus during 2011 whilst continuing to compete in GP2. With his 2nd place finish in the GP2 Series for 2012 the young Brazilian is looking for a place in an F1 team for 2013. With Toro Rosso having already named their lineup for 2013 the opportunity to drive their car simply puts him on the radar for other teams with the driver completing 67 laps.  The Toro Rosso did feature their HUGE 'Monkey' Seat which I'm now going to start calling a 'Gorilla' Seat (below) 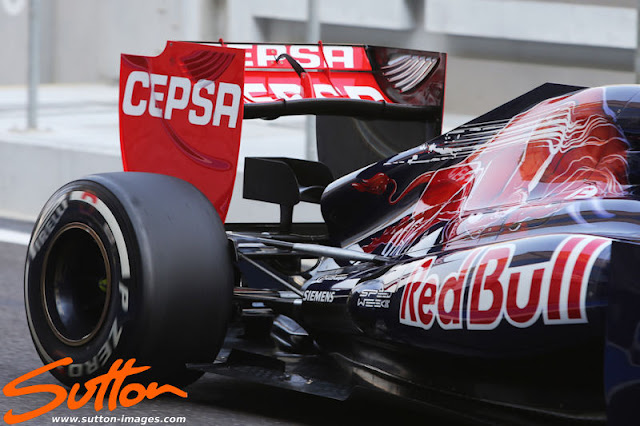 Giedo Van Der Garde piloted the CT-01 on Day 1 with the team continuing to evaluate parts taken to Abu Dhabi but seemingly didn't work as planned.  In the pic below we can see the team using a test rig in front of the Sidepod to evaluate the airflow. 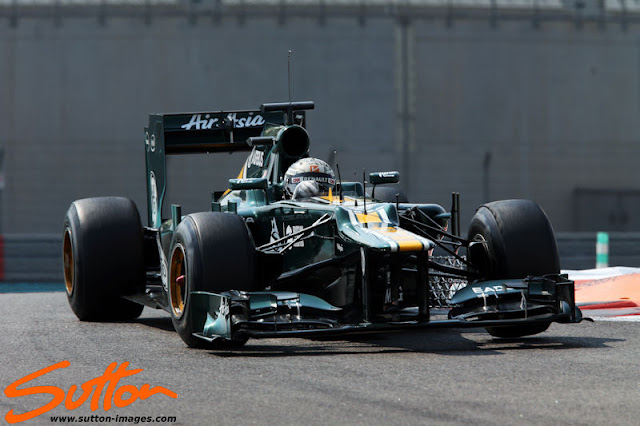 McLaren ran 2 driver's in their day 1 lineup both of which have already been mentioned, unlike some of the other teams it would appear that McLaren were simply looking to establish track time on day 1 with both Paffett and Magnussen covering 84 laps combined. They did however use their diffuser test rig during some of that test phase along with their Front Nose/Wing test rig. 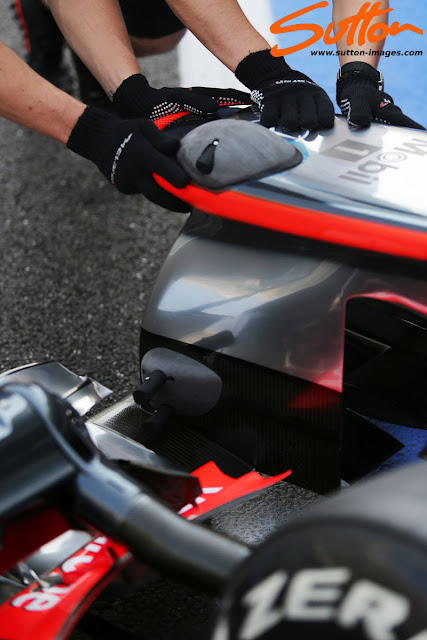 Lotus also used a test rig that attached above the diffuser in the gap between the Wheel & Rear Wing Endplates to assess their new 'Coanda' Style exhaust.
Tagged
Newer Post Older Post