Day 2 of the Young Drivers Test saw Gary Paffett remain in the drivers seat of the McLaren for the morning session whilst Oliver Turvey took the wheel of the MP4-27 during the afternoon session.
Oliver uses the simulator to give feedback at MTC during race weekends and so should have a decent grasp on the handling characteristics of the '27'. Between them the pair notched up 103 laps which just like day 1 was more than any other team.
McLaren ran with a new Front Wing in the afternoon session which deleted the usual twin element R Cascades they have used for some time now (White). These were replaced by a Vertical Fin (White), furthermore the Mainplanes curvature near the end of the Wing has been replaced with more curved profiles (Green). The most interesting part for me is they have removed the outer turning blade that divided the Wing Planes from the Endplate allowing more airflow approach for the tier that's connected to the Endplate at the rear (Yellow). 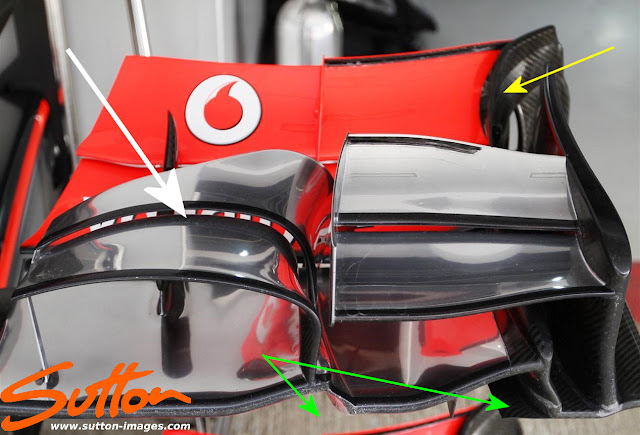 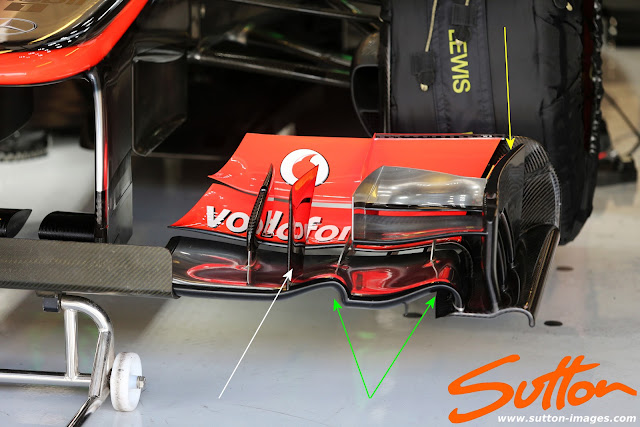 Above: Front Wing as used on Day 2 of the test

Antonio Felix Da Costa continued at the helm of the RB8 taking the fastest lap of the day, we shouldn't however concern ourselves too heavily with times as the drivers are collecting data, testing parts etc. Not to be outdone by Lotus, Mercedes & Sauber the team tested their own version of DRD as seen in the pictures below. The pylon resembles the one used in pre season testing when they evaluated having a centralized actuator for DRS.  Unlike Lotus, Mercedes & Sauber I can see no obvious additional Inlet Ducts for their iteration which makes me wonder are they using some of the Tunnel generated airflow or simply utilising air from the Airbox or Sidepod. 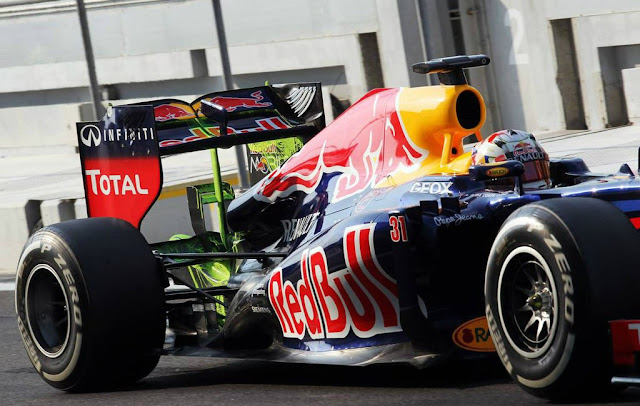 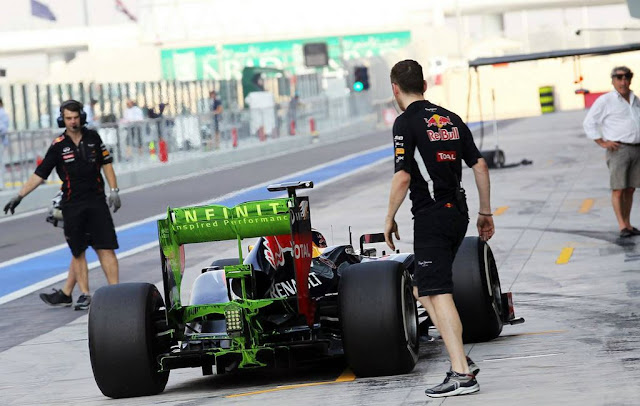 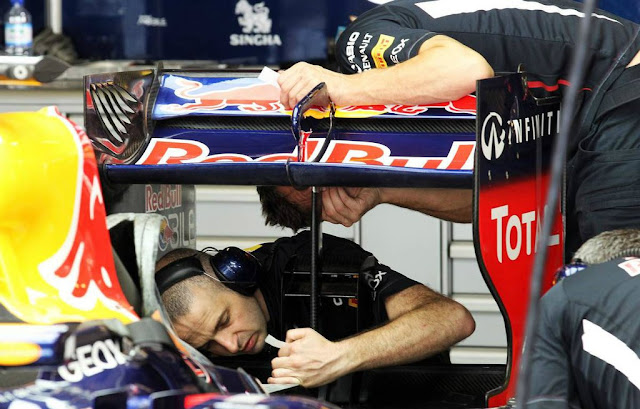 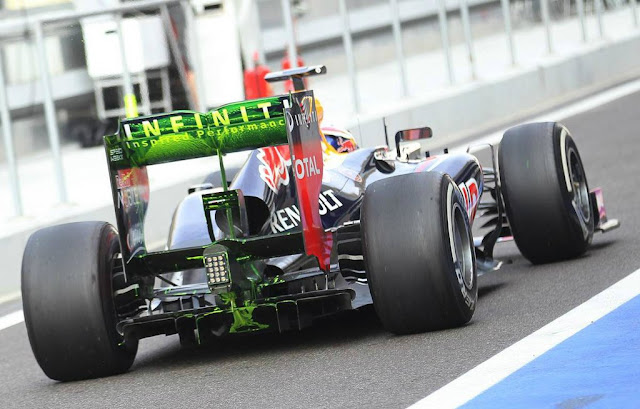 As we can see in the last picture (Above) The flo-viz is recording some dramatic effects from Red Bull's DRD.

Esteban Gutierrez took the helm of the Sauber C31 for day 2 of the test and has been linked with the remaining seat alongside the confirmed Nico Hulkenberg. The Mexican giving continuity in terms of sponsorship avenues for the team. The Mexican posted the 4th fastest time but completed the most laps of any driver tallying 93 laps behind the wheel. Sauber continued to assess the merits of DRD but more interestingly (missed this on Day One) a new outlet has appeared in the side of the C31's Sidepod. It seems airflow from the frontal region is being dispatched into the airflow along the floor to help with attachment. 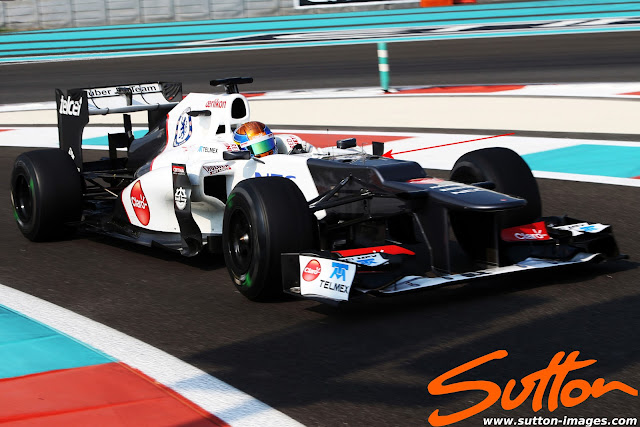 Above: I have arrowed the additional inlet ducts that have appeared on top of the C31's Bulkhead 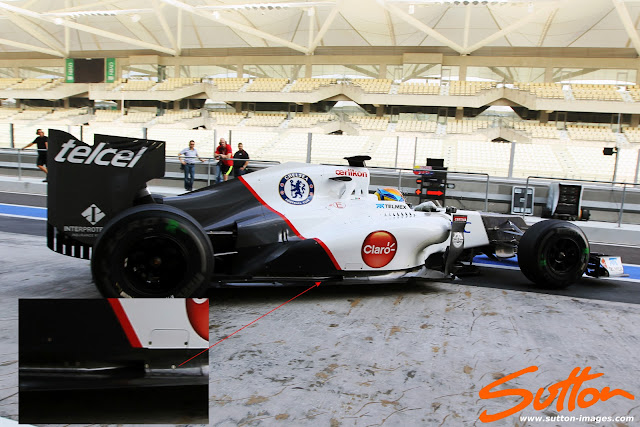 Lotus had Edoardo Mortara behind the wheel of the E20 and re-evaluated both DRD and the high power exhaust outlet. We have already seen proof that the DRD Engine Cover can be fitted with the 'Coanda' exhaust and so perhaps the team will evaluate these in combination on Day 3. 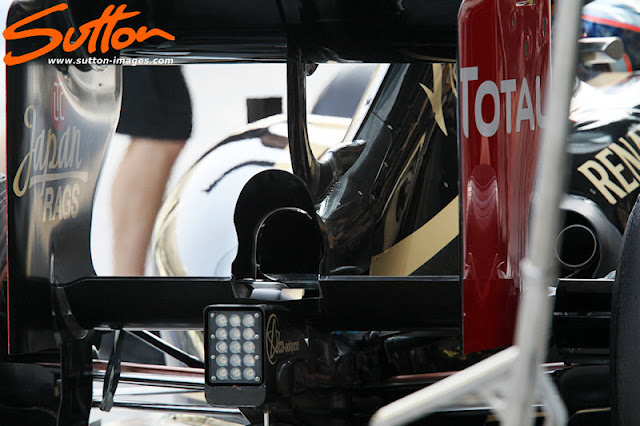 The information from Day One can be found here: http://somersf1.blogspot.co.uk/2012/11/abu-dhabi-young-drivers-test-day-1.html