The World Motor Sport Council WMSC met in December and a number of changes were made to the 2014 Technical Regulations which I commented on at the time: 2013-2014 Regulation changes

What I didn't have time to look at were the bodywork and exhaust placement implications for the 2014 Season:

Exhausts have become somewhat of a go to area in the last few decades in order to extract additional downforce and so the FIA are always keen to limit the scope available to the designers. The newest set of 2014 regulations are extreme in their application of exhaust positioning in order to reduce it's aerodynamic effects. 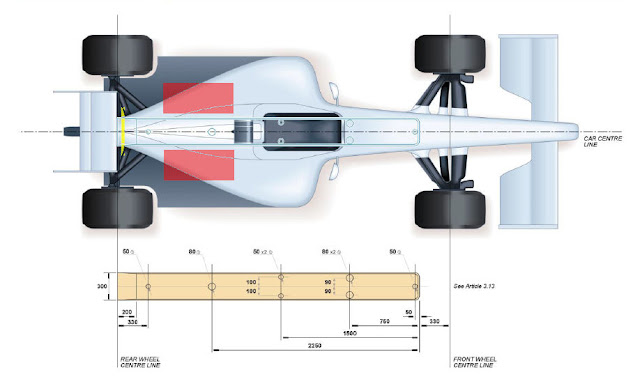 In the basic mock up above I've highlighted the representative area's for comparison. For 2012/13 the teams were/are allowed to locate the exhausts last 100mm of tailpipe within the Red zone:

c) Be located between 200mm and 500mm from the car centre line.
d) Be positioned in order that the entire circumference of the exit of the tailpipe lies between two vertical planes normal to the car centre line and which lie 500mm and 1200mm forward of the rear wheel centre line.)

The very small yellow zone at the rear of the car however is the area for which the exhaust outlet(s) latter 150mm of tailpipe can be placed in 2014.

c) Be located no more than 250mm from the car centre line.
d) Be positioned in order that the entire circumference of the exit of the tailpipe lies between two vertical planes normal to the car centre line and which lie between 30mm and 50mm forward of the rear wheel centre line.

The height at which the outlet is allowed has also changed, narrowing the window for placement by a further 150mm:

5.8.2 Engine exhaust systems may incorporate no more than two exits, both of which must be rearward facing tailpipes, through which all exhaust gases must pass.

The premise behind a singular outlet was driven by the use of a single stage compressor:

5.1.6 Pressure charging may only be effected by the use of a sole single stage compressor linked to a sole single stage exhaust turbine by a shaft assembly parallel to the engine crankshaft and within 25mm of the car centre line. The shaft must be designed so as to ensure that the shaft assembly, the compressor and the turbine always rotate about a common axis and at the same angular velocity, an electrical motor generator (MGU-H) may be directly coupled to it.

It seems that the Engine manufacturer's believe otherwise with the re-inclusion of two exits, this of course will have a bearing not only on the Engine's performance but also the utilisation of exhaust gasses to drive aerodynamics.

The size of the exhaust outlet(s) has also been defined by an area measurement:

5.8.3 The total cross-sectional area of the exhaust exits at the rearmost point of the tailpipes must lie between 7500mm2 and 14000mm2.

Rather than the regulations current regulations defining 75mm as the maximum outlet size.

F1 has become a place synonymous with high noses a trend that all the team pushed to the limits in 2012 and was the result of the 'Step Noses'. For 2014 the Formula returns to a lower nose with the regulations requiring the cars nose pylons be a maximum height of 135mm, whereas the current regulations permit a maximum height of 200mm.

The Front Wing has also been narrowed from 1800mm to 1650mm in an effort to change the aerodynamic influence attained by the element. The footplates width has been narrowed from 60mm to 50mm and is still required to be represented by a continuous piece of bodywork no more than 100mm above the reference plane.

The Rear Wings characteristics will be adjusted with the Mainplane's lowest position being raised to 750mm from the current 730mm. Furthermore DRS is currently allowed to move the top flap from a gap of 10mm to 50mm from the mainplane, the 2014 regulations adjust this to between 10mm and 65mm *The change in flap alteration for DRS has been redacted in the most recent version of the regulations.

The lower beam wing has been a method by which the teams have been able to extract additional downforce for a number of seasons now. Currently the rules permit bodywork between the rear wheels up until a point 400mm above the reference plane. However the 2014 rules stipulate that no bodywork is allowed in the region above 150mm from the reference plane (with the exception as always being the 150mm central zone shown roughly in green on the image below, allowing the teams to still utilise Monkey Seats) 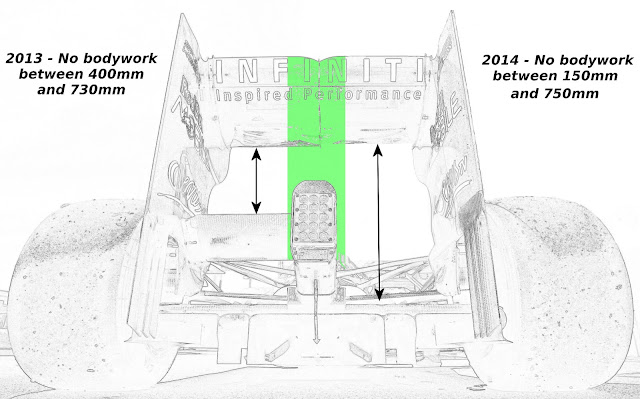 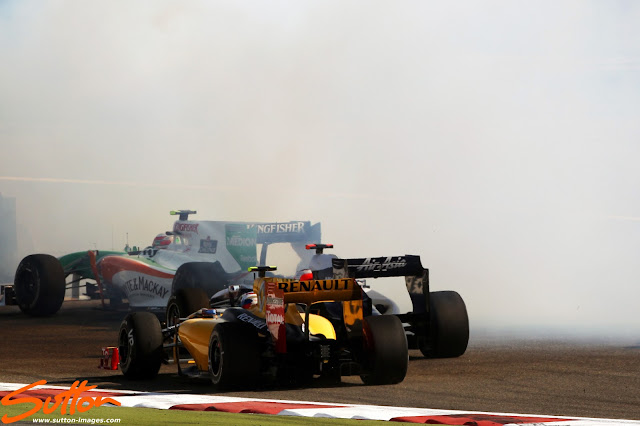 Above: The Renault R30 and Force India VJM03 of 2010 both feature central rear wing pillars

The loss of the Beam Wing was inevitable with the exhaust exit location directly in line with that area, as the combination of both could have proved a massive downforce coup.

On the face of it the changes don't seem monumental but they will inherently change the design aspect of the cars.  The lower nose and narrowed front wing will change the design philosophy of the whole car as the designers discover ways in which to turn the airflow presented to and produced by the wheels/tyres.  The centralisation of the exhaust(s) limits how the designers can utilise the exhaust to stop tyre squirt impinging on the diffuser.  This combined with the net downforce loss of the beam wing will result in a much more rear end happy car.
Tagged
Newer Post Older Post