The frontal section of the Sidepod is an area of the car of particular interest to the designers this season with the need to further enhance the airflow received by the designers favoured 'Coanda' exhaust solutions. We saw teams sporting these devices throughout 2012 but several teams have adapted new approaches when catering them for their 2013 designs.  In a related topic I'll also look at Ferrari's adaptation of Rear Wing Trailing Edge Slats.

A trend started by Ferrari, these fins are placed horizontally and longitudinally between the Wing Mirror Stalk and the leading edge of the Sidepod. These fins vorticise the airflow as it moves over the Sidepod increasing downwash and reduce the boundary layer as it builds up over the length of the Engine Cover / Sidepod consequently increasing the Sidepods efficiency. 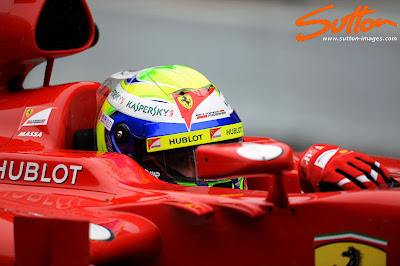 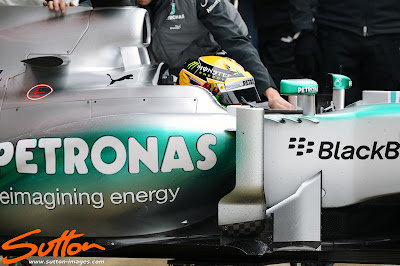 Another way of achieving this is the design of the Wing Mirror Mounts or Stalks, McLaren have this season designed their stalks in order to achieve a wing profile helping to manipulate the airflow in the region just as the combination of fins above are designed to do. 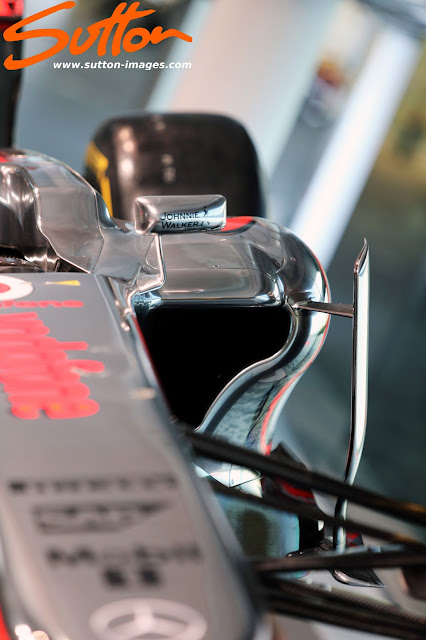 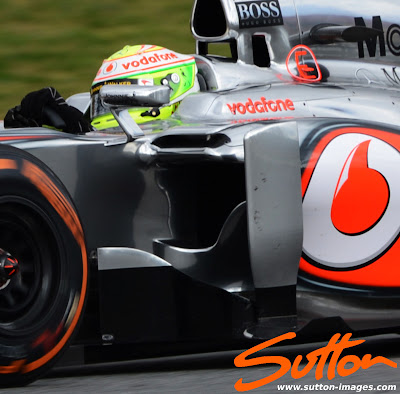 Sauber employed these last season and when McLaren changed the Sidepod configuration from Hockenheim onwards they too ran some (albeit integrated into their Vertical Sidepod Airflow Conditioner) Just like the Vortex Generators mentioned above these devices are utilised in order to extract additional performance from the Sidepod itself. If we were to look at the Sidepod from the side it's shape is reminiscent of an airplane wing and is the reason you hear Gary Anderson (BBC) refer to the region creating lift. The Leading Edge Sidepod slats we see McLaren using this season are used in order to alter the characteristics of the Sidepod to reduce this lift. The Slat enables a more efficient Sidepod by energizing the Boundary Layer whilst allowing the Sidepod to operate with a larger Angle of Attack.  Without the Slat the Boundary Layer may allow the airflow to separate resulting in the lift Gary refers to. 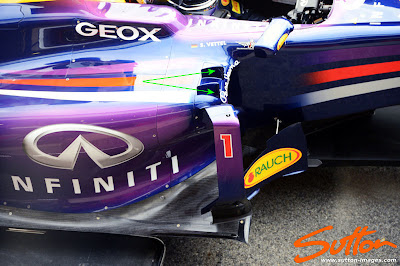 Just like the elements previously mentioned, Vortex Generator's are used in order to trip up the airflow so as to disturb the trailing airflow. Their height usually indicates the height of the Boundary Layer which they are trying to trip up and so each version will differ to the characteristics of that teams Sidepod. A team may also employ several VG's in order to affect a wider portion of the Sidepod or indeed if the length exceeds the height ratio of less VG's.

Combination of the above

Mercedes have placed both Cockpit Vortex Generators and VG's on top of the Sidepod in order to control the downwash toward their exhaust. 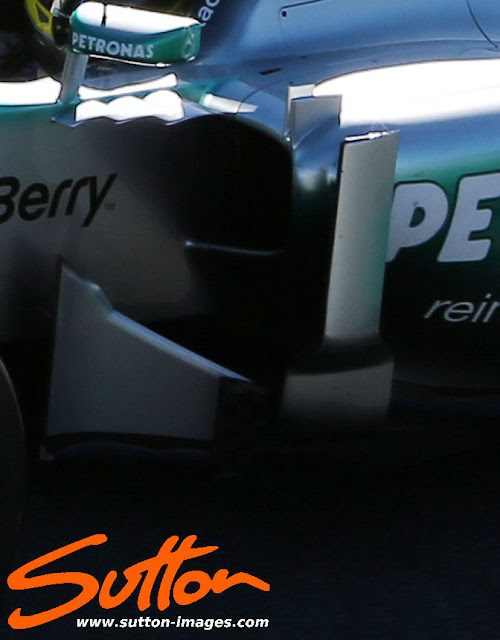 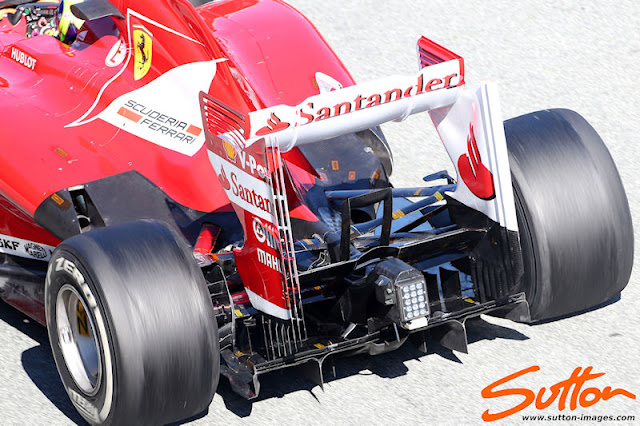 This is an interesting concept and one I have been meaning to talk about since Ferrari first launched the F138. I'm also refraining from calling them flaps (as used in aviation) as they are fixed elements.
I may be making the wrong connection here but with Ferrari adopting Pull Rod Front Suspension last year and now these Trailing Edge Slats this year I have to question if Ferrari have some ex Minardi staff on their payroll. Front Pull Rod was last seen on the PS-01 and a similar Rear Wing Slat concept was used on the PS-05. 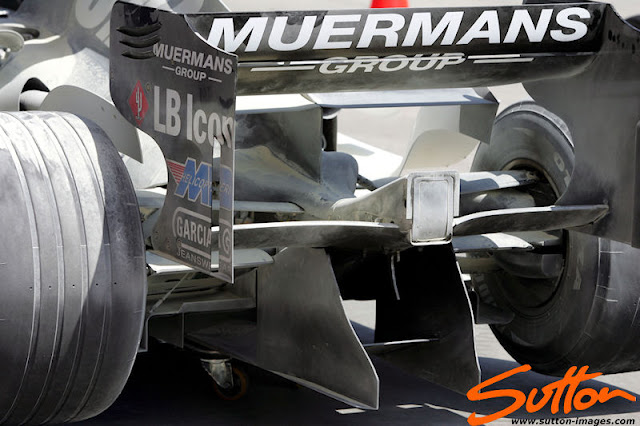 As these Slats are serving a few purposes in terms of the F138's overall design I have decided to break it down into several elements whilst explaining the function of certain elements too:

Endplate extension: The Endplate acts as an extension of the Mainplane, Top Flap and Beam Wing that sit between them, by increasing the size of the Endplate you can increase a wing's effective aspect ratio leading to more downforce and less induced drag. The size of Endplates in F1 is controlled by the regulations and so Ferrari have thought outside the box. By using Slats at the trailing edge of the Endplate they are therefore increasing the efficiency of the same area (allowing airflow to move from one side of the slat to the other) in much the same way we have seen teams use the Louvres at the front of the Endplate for many years now. This gives the Endplate a larger aspect ratio impacting on the Wing profiles between them.

Wing Tip Vortices: When we see cars operating in damp conditions it's easy to see the drag at work on the Rear Wing. Tip Vortices are the spiralling air we see expelled from the edge of the top flap where it meets with the Endplate (Air moving from the high pressure to low pressure side causes the air to rotate (Vortice). In the case of the Slatted F138 images from Jerez captured the wing tip vortices in a strange position much further outbound. This to me donates the fact that the increased aspect ratio of the Endplate (as mentioned above) has also resulted in the reduction of drag. (The farther a vortex is shed from the wing the less influence it has on it) 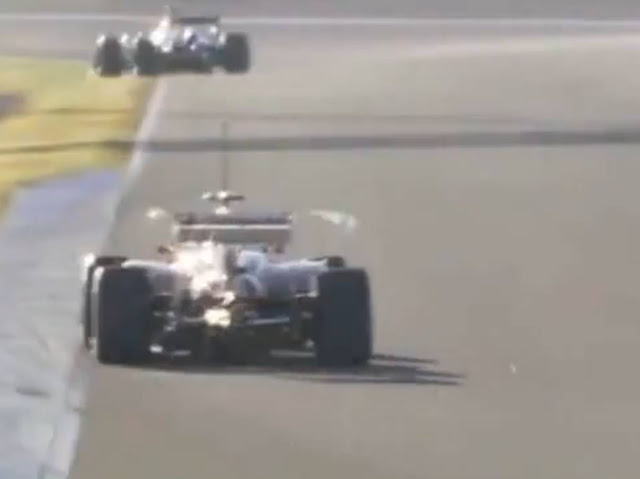 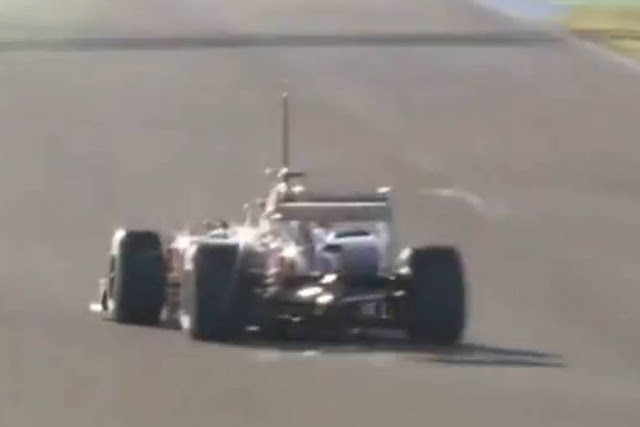 Attachment Issues: Gary Anderson spoke on several occasions last season in regard to Ferrari suffering re-attachment issues when using DRS. This is when the airflow takes too long to re-attach to the wing. This is a complex scenario bought on by the team trading off their DRS delta for a high speed gain resulting in an instability when the DRS is closed by the driver. The team looked to offset the time differential last season by operating DRS with a foot pedal rather than using a steering wheel button. The movement from the foot pedal DRS button onto the brake pedal would start the process of the top flap moving into a closed position before the brakes were applied gifting the team a little more leeway. This however didn't seem to be enough to overcome their problems and left them with 2 choices, suffer the consequences of a little lateral movement in the braking phase or adjust their DRS delta by adjusting the size of the Mainplane / Top Flap combination. It's a cat and mouse scenario where neither really directly solve the problem of trying to force a better lap time for qualifying and then have a balanced car during the race. The problem didn't hurt Ferrari as badly during the race as DRS usage was limited and so the re-attachment issue only occurred when trying to overtake someone.

Cause and Effect: By making this area more efficient the slats have to be splayed at an outward angle, acting like a perforated Gurney flap. This means the airflow that would ordinarily be travelling along the outside of the Endplate will have to find a way outward and as these slats sit behind the wheel the expelled air is pushed into the region behind the wheel. The Endplate Slats and Strakes become vertically shorter the further back they reach inline with the expansion of the Diffuser. 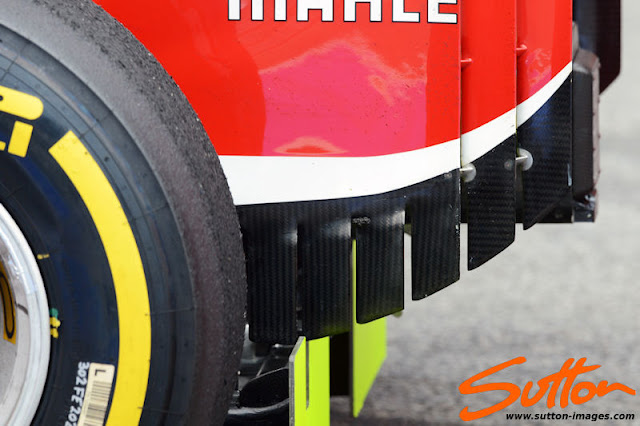 Overall the Rear Wing Endplate Slats are a neat solution to overcome a problem that the F138's predecessor suffered whilst also increasing the operating window the Rear Wing operates within. We may see other teams adopting similar solutions throughout the season as teams search for more downforce.
Tagged
Newer Post Older Post