Williams took the FW34 to Jerez whilst the team continued to refine their 2013 design, they did however chose to run a vanity panel on the FW34 whilst putting the 2013 Pirelli's through their paces. 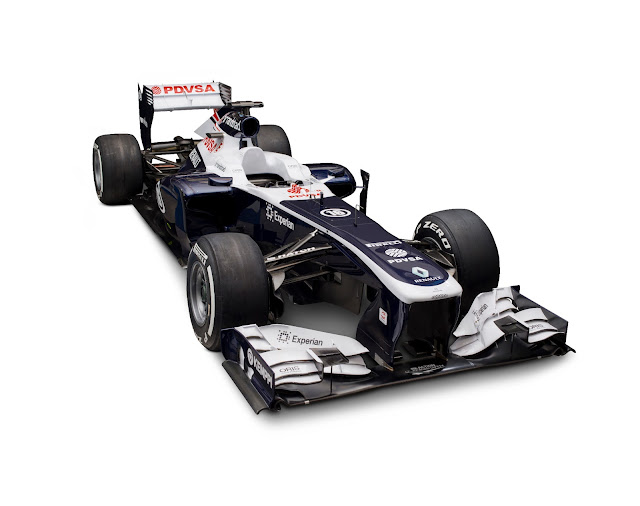 The first thing that becomes apparent to me is the similarity of the nose and pylon ethos that Williams have adopted, although they have fallen short of adding the juts at the tops of the pylons. The nose itself resembles the horseshoe shape that Red Bull have been using for some time now with a more bulbous frontal area accompanied by two longitudinal strakes along the side of the nosecone making the nose a singular section. The team are utilising a vanity panel in order to keep the height their arrangement requires for airflow under the nose. 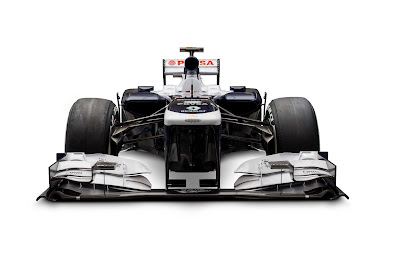 The Front Wing is new for 2013 with this being an area the team paid particular attention to throughout 2012. Having run around 8-9 different variants in 2013 you'll understand if I'm skeptical this one will make it to Melbourne, however we can see it is a change in philosophy with the outer curvatures used on the mainplane to generate elongated vortices reduced to 1. The trend of separating the top flap at the inner section has been baulked by Williams in favour of splitting the lower flap, the idea behind this is vortex generation and so Williams are obviously looking to do this at a lower point. They continue using multi tiered cascades for higher efficiency with a smaller cascade on the inner side.

The Pylons are lengthy items that stretch back toward the L Shaped Turning Vanes, these turning vanes are set at an acute angle splaying outwards as they stretch back under the car.

Front suspension is taken care of by push rods whilst the team move away from scoopless front brake ducts and step into another controversial arena. The team are using the air captured by the brake ducts and letting it escape at the outer face of the axle, Red Bull were doing something similar last season but were told to remove it. This will have an effect on the wake produced by the front wheels but must be carefully managed as otherwise it's effect could be detrimental further downstream. 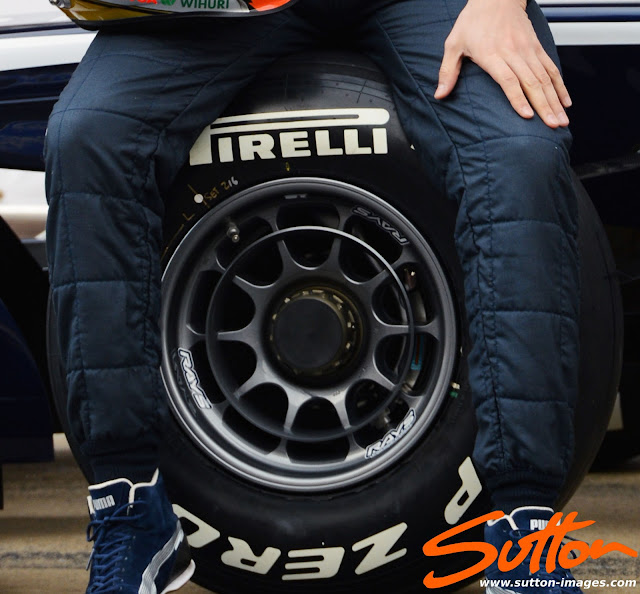 The Sidepod design and Inlets remain laregly unchanged from the FW34 whilst the team launched the car with a Semi-Coanda style exhaust and just like Mercedes have utilised the space between the channel and engine cover to place Shark Gills.  These Shark Gills not only dispense airflow from the radiator but will also like the exhaust alongside it help with attaching the downwash.  Their exhaust was to stir controversy straight away as the team, like Caterham have placed a blade at the tail end of the exhaust channel. The Williams Blade sits right on the top edge of the channel and is split into 2 unlike Caterham's that was inset into the channel. This has led to Charlie Whiting speaking out on the subject deeming such aerodynamic appendages illegal. I'm quite sure Williams and Caterham alike will be asking for clarification on the subject as, as I've already alluded to in the Caterham CT-03 analysis the Blade is within the rules as they are written in 5.8.4.  There was however a technical directive (unavailable in the public domain) issued to the teams back in 2011 in regard to re-ingestion of the exhaust plume and it's this that is believed to be the bone of contention with the other teams / FIA who see the channel blade(s) as illegal. 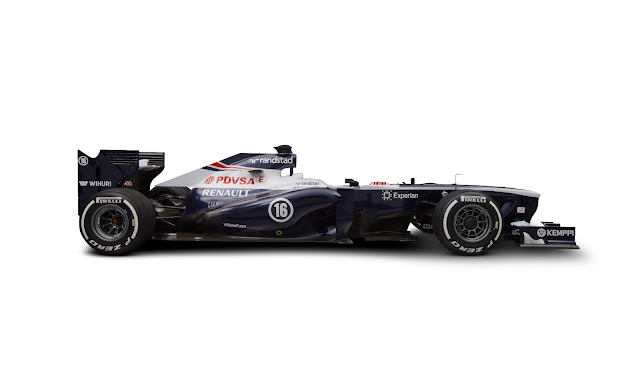 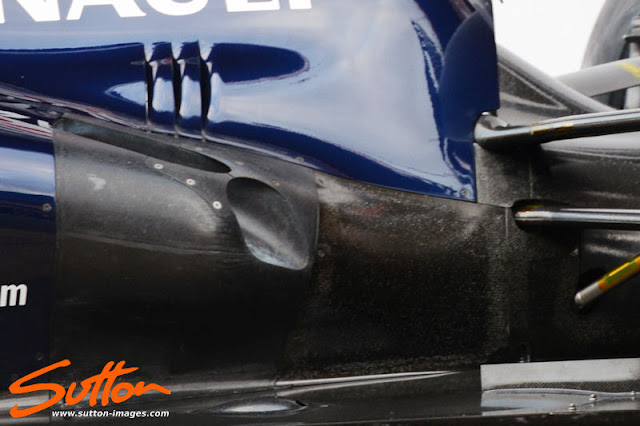 At the rear of the car the team continue to use their miniscule gearbox, whilst the team haven't enclosed their halfshafts inside the lower wishbone they have placed the lower wisbone directly in front of the halfshaft. Williams utilised a swan neck mounting from the top of the gearbox to their Monkey Seat for 2012 but during the first day at Barcelona today we can see they have reverted to a more conventional design mounted to the Beam Wing. The seat did feature a perforation making for a more efficient wing, whilst also making cutouts to it's endplates to reduce it's drag like we have seen teams do for years with endplate louvres.

The team didn't present their car with these but during the test in Barcelona today they placed Leading Edge Slats above the Sidepod Inlet, these little appendages have adorned both Sauber and McLaren cars in the past and help to further enhance the downwash over the Sidepod toward the Exhaust. 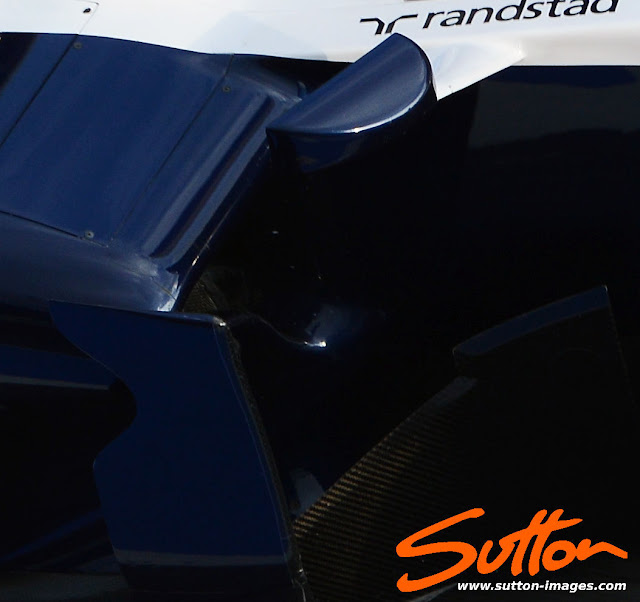