McLaren's stuttering start (My initial thoughts on the MP4-28)

The signs aren't looking good for the McLaren fans out there but fear not if any team can turn around their own fortunes the Woking based team are prime candidates to do so (Afterall look at the turnaround they made in 2009). So what's so drastically wrong with the MP4-28 or were we all expecting too much too soon? The season opener in Melbourne saw both McLaren drivers being critical of their new car whilst the Team Principal didn't hide his dismay at the lack of performance the team had either.

Just as we found at the start of Ferrari's 2012 campaign pockets of the media are simply pointing at McLaren's adoption of Pull Rod Front Suspension and using it as a scapegoat for the teams bad start. By all means I'm not completely ruling it out as one of the factors for the teams bad start, as the team struggled with the time taken to make setup changes throughout the Pre-Season tests as components that are easier to get to when using Push Rod are now located on the underside of the chassis. This is a problem that Ferrari also encountered last season and have made changes to their arrangement for 2013 to alleviate the problem. Furthermore Adam Cooper reported that the setup used to achieve their quickest time in Jerez was done when a component was inverted during car setup and that when the team rectified the problem their pace seemingly disappeared.

So why the change to Pull Rod? A good question that requires several answers, the placement of the components in the chassis lower down attributes a lower CoG (Centre of Gravity) which of course is always welcomed in F1. A small aerodynamic gain is also made by the placement of the rod in the Pull Rod configuration allowing it to work more efficiently with the wishbones to manage airflow onward to the Sidepods.

Mechanically they have two very different characteristics and I'm talking about the effects of 'Bump' and 'Droop', this is when the wheel is deflected upward (Bump) or drops away with the circuit (Droop) both Push and Pull Rod Suspensions will react differently in both scenarios:

Push rod flexes whilst in 'Bump' where as a Pull rod flexes in 'Droop' which also requires the loads on the wishbones to be measured differently too with the Pull Rod adding additional strain on the connection of the upper wishbone to the chassis.

Of course mechanically there is little difference in Push and Pull rod suspension although as mentioned by virtue of 'Bump' and 'Droop' the way in which the forces are placed on the chassis and associated suspension components do differ.

Not being privy to driving a car with these different suspension options I can only speculate that the resultant differing of forces will require the driver to adapt his style to suit the given specification.

The time taken to facilitate setup changes on the MP4-28 is an undesired effect of the Pull Rod setups nature as access to all of the components is now placed under the chassis. This has had a knock on effect aerodynamically with team sporting some new and intricate under nose Turning Vanes at the first test in Jerez that were latterly replaced by much simpler Turning Vanes in Barcelona more than likely due to their installation hampering suspension setup times. Turning Vanes complete an essential job under the nose of the car, not only managing the centralised airflow between the pylons (Y250 region). They further manage the airflow between the wheels and the chassis especially with the Front Wheels turned in yaw. Have McLaren sacrificed some of the aero advantages of raising the nose trying to understand the suspension?

Further down the car one of the big changes between the MP4-27 & 28 is the height of the tub, the MP4-27's tub was around 550mm high which fell in line with the teams initial design criteria but as the team realised that other teams had moved closer to the limitations (625mm) and run their cars with increased nose heights McLaren too moved to a higher nose tip. Therefore when designing the MP4-28 the team decided to raise the tub to the maximum 625mm allowing them to also run with an even higher nose tip. The aim of this is to drive more air under the nose of the car onward to the floor and Sidepod undercuts.

This however leads us onto the Sidepods where height is also increased over it's predecessor, the frontal area of the Sidepod is a crucial region as it's not only the inlet to the radiator but controls flow rearward both around the Sidepods undercut and over the Sidepod in the downwash toward the exhaust. McLaren have made marked changes in this region over the '27' with both the Side Impact Protection (SIP) being placed in a more forward position than the actual Sidepod (much like Lotus' E20/21) and a change in design of the Inlet from the previous Butterfly styling.

The additional height of the Sidepod should allow more air to move around the undercut to the rear of the car. Meanwhile the frontal height of the Sidepod being increased has also required the team to make alterations to the sloped section of bodywork that trails down to the exhaust channel. With approximately 50-60mm higher Sidepods the team may be finding that their previous 'Coanda' approach isn't as planned even though the team have also shortened the overhang at the rear of the car. This is in contrast to Ferrari and Mercedes who have both re-orientated and lowered the section of overhanging bodywork at the rear of the car. Which leads me to believe that the team are drawing the exhaust plume down onto the floor much further back otherwise the airflow coming from around the Sidepod will impinge on this.

Above: As we can see from the side by side comparison the rearward slope of the Sidepod has been altered on the MP4-28 whilst the more drastic rearward undercut has been reduced significantly 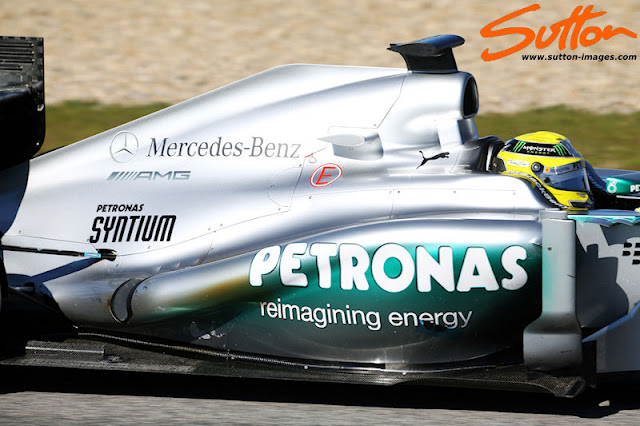 Above: As we can see Mercedes have used a very similar concept to the MP4-27's rear end Sidepod undercut and seem to be enjoying good results from it

McLaren were not only the first team to introduce the Semi-Coanda exhaust last season but also pioneered the use of the Vertical Vortex Generators we see adorn many other cars now. When they introduced their new package at Hockenheim the team switched to a horizontal approach integrated into the Vertical Sidepod Airflow Conditioner. For 2013 the team have opted to continue in a similar vane but separated the 2 components utilising a Cockpit Wing or Leading Edge Slat which should aid in the downwash effect.
Another area where the MP4-28 sees carry over from the '27' is both the Front and Rear Wings with the former resembling a specification used by McLaren from Austin onwards last season. As we know the Front Wing is crucial in terms of setting up the airflow aft of it and so it would seem strange that with both the aero change to Pull Rod and all of the relative changes by raising the tub/sidepods that the team continue to use a similar design.

Above: The new Front Wing (Top) only has the the singular curved section at the Mainplanes outer portion whereas the slightly older specification (Bottom) features two.  These help to form elongated vortices for aiding in the control of airflow

When compared to the likes of Red Bull, Ferrari, Lotus and now Mercedes you have to question the rudimentary style of the McLaren wing. Still only utilising 3 tiers in their design we have the like of Ferrari pushing on with complex 7 tier arrangements. It therefore begs the question of how much more efficient are their competitors Front Wings with their additional outer tiers and split flap arrangements. 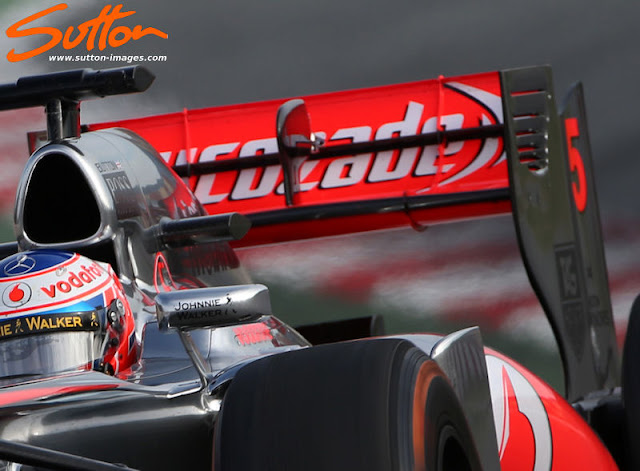 The MP4-28's rear wing is also pretty much a carry over when compared to it's predecessor and although Melbourne is a circuit requiring a good level of downforce I was surprised to see how much Angle of Attack (AoA) the team seemed to be running combined with a Gurney tab too. In terms of Rear Wing design Ferrari have to go down as the team with the largest update over the past few seasons when they introduced their Trailing Edge Slats. However an area that seems to have passed McLaren by whilst others have taken advantage is the use of the Top Flap V grooves used to reduce drag. Meanwhile further down the car the team are still running very much the same Beam Wing and Monkey Seat configuration they ran last season too which of course is allied to the effects of the Diffuser and Rear Wing so all must have changes made in harmony, it's just perplexing that not much progress has been made in the area.

I'm not wanting to get all doom and gloom over the McLaren situation as I opened with, I believe McLaren are more than capable of making the necessary changes to resolve their issues. Sepang is a very different circuit to Melbourne and so will probably give us more of a gauge as to where the team stand relative to everyone else and what they need to do going forward.  The issue however for me is that when compared to their rivals the MP4-28 perhaps lacks the finer details that could give it the potential to win races.
Tagged
Newer Post Older Post