Pirelli have been the topic of huge conversation and debate this season, with the teams placing increasing scrutiny on the tyre manufacturer and leveling the blame on them for all manner of issues.  The failures seen today differ from the ones we have seen before, with the tyre exploding rather than delaminating.  The upshot of this is that Pirelli unable to make changes to the construction of the tyre without unanimous consensus from the teams, has instead changed the bonding process for the tread platform.


In previous races we have seen that when the tyres have got cut or damaged the tread platform strips off (often in spectacular fashion), but as the rear tyres have a steel band running through them it enables the driver to return to the pits with the carcase of the tyre intact. 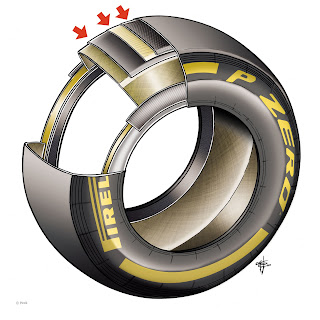 What we have seen teams do in the past is run outside of the reccommended parameters set by Pirelli.  Camber and Tyre pressure is something the teams will always try to find advantages from and has caught out the likes of Red Bull in the past (Spa)

The quick fix for Pirelli will be to return to the bonding process used before Silverstone which allowed drivers sustaining cuts/damage to their tyres to return to the pits with their cars unscathed.  The long fix is something that was debated during #TyreGate and that's the problem of no in-season testing.  Changing the construction will lead to an advantage swinging in one teams favour, something I think we can ill afford at this stage in the Championship.
Tagged
Newer Post Older Post