As I tentatively pop my copy of Codemasters 2013 game into my xbox my mind wonders back to my first exposure to Formula One games and the Psygnosis/Bizarre Creations game of 1997. Games and the equipment we play them with have progressed hugely since then but what I'm really anticipating is the unmistakeable voice of legendary commentator Murray Walker to bellow out of my speakers as the legendary commentator introduces the much anticipated classic content the game offers. Codemasters have since their foray into the F1 franchise steered away from placing commentary over the racing action in favour of the raw engine sounds and atmosphere. I have to say I think they have made the right decision as I can honestly say however funny it would be to have Murray dissect some of the on track action the repetition would become unbearable quicker than one of Fernando Alonso's race starts.

Murray's introduction of the Classic Mode adds to that legendary feel that you first get as you see the car in the sparse pit garage and then again when you take charge of one of the classic machines. The full Classic Edition comes at a financial cost to the gamer whilst the standard packaging includes the 80's tracks and cars. The 90's content that is missing from the standard edition will be made available via DLC a few weeks after launch. The classic element is a facet of gameplay that many having been screaming out for, for some time. 17 iconic drivers, 12 cars and 4 extra circuits from the 70's, 80's and 90's give the title a whole new spin.

Those of you desperate to venture out as Senna in the MP4/4 etc will however have your hopes dashed as the licensing for these classic drivers, cars and circuits has been a challenge already. (PC modding communities I'm sure will have a field day in terms of replicating other liveries, teams, drivers etc over the coming months)

DLC (Downloadable Content) however could open up another platform for Codemasters to introduce more elements to the game with Niki Lauda's Ferrari 312 (as seen in Rush) available for download and use in time trial from the get go. Technical nuance as any reader of my work will know is my bread and butter so my instant reaction is to reach for the classic stuff and discern the difference in power and handling characteristics between the varied machinery on offer.

I was only able to get hold of a standard copy and so only the 80's classic content is available, whilst my first job was to get hold of the 70's Ferrari via Racenet. As soon as the DLC is activated for the 90's content I'll be purchasing it as it's very much welcomed addition to the game in my opinion. I decided to jump straight into the Ferrari 312T2 at Montreal (Time Trial) as I wanted to use the circuit as a benchmark for back to back testing all the cars (as this and Melbourne are the two circuits for some reason I know better than any). Of course this car wouldn't set any lap records as with a mere 450bhp (ish) it's not quite got the poke of some of the other machinery and no where near the downforce. In entering the first corner, I'm immediately impressed that the car inherently adopts lift of oversteer making the car easy to point and shoot into the corners. Normally being swayed to the Offset T Cam darkside, Cockpit view is suddenly my weapon of choice with an aesthetically pleasing level of detail allied to a great view of the circuit. After a few laps I feel assured that I'm comfortable with the way the car feels and have a handle on the clearly tweaked physics engine the games platform now uses. Best time in a 5 lap stint 1.22:906 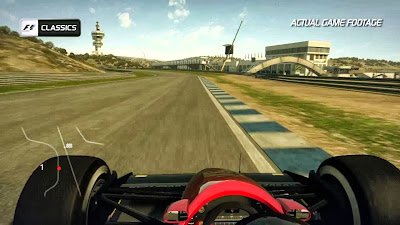 My next assignment in ascertaining the games credentials is a trip in the Ferrari 87/88c which I'm hoping would provide me with a stark contrast to the 312. I'm not dissatisfied as it certainly is departed in the way the car handles. The turbocharged 88c is an absolute handful and requires both a different approach and style to how it's driven. Power seems fairly restricted in the lower revs but as you nail the loud pedal a huge surge of power causes the car to become unsettled. It feels as if the car is almost counter balanced around a central point with both understeer and oversteer possible dependent on corner entry / apex speed. Best time in a 5 lap stint 1.18.842 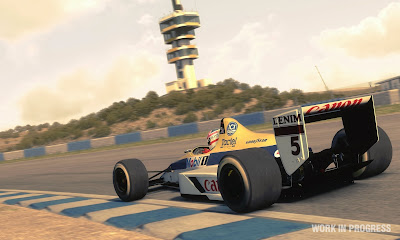 Then as a barometer to the previous car I thought I'd give Williams' FW12 a go, in theory the normally aspirated Judd powered FW12 although it featured reactive ride should not be able to surmount a challenge to the Ferrari of the same year. This however is where I was left shocked as, as I rounded the first few bends I noted the car was able to hold a higher apex speed. Traction was also of course less of an issue as you didn't have to feather the throttle out of the corners and whilst the Ferrari was able to reel in the Williams in a straightline overall the car was much more manageable. I will have to return to this back to back test when my new wheel/pedals arrive as I feel certain I should be able to drive the Ferrari much quicker than the FW12. Best time in a 5 lap stint: 1.18.446

Obvious limitations have been placed on the use of classic content by FOM as the liveries are devioid of the tobacco sponsorship that adorned the racers back in the day. However a neat trick employed by the designers is the use of different HUD's for those that play outside of cockpit view and an instagram style filter which adds a yellow hue to the overall picture. Unfortunately the damage model is switched off on the classic cars and so we won't get the feeling of how these cars handled when damaged. These touches all add up to a brilliant nostalgic feel to the game. 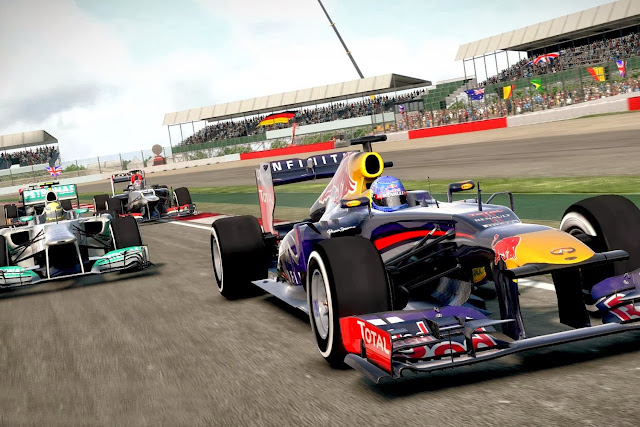 The main content of the game remains much the same as it's 2012 counterparts, largely due to the sports calender remaining unchanged (except for the loss of the European GP in Valencia). Of course the cars remain visually representative (of the cars from the Melbourne grid for licensing purposes) and the rules of the sport are upheld. Clearly work has been undertaken to reign in the level of difficulty posed to the average gamer with kerbs no longer spitting you into the gravel at the first sign of ambition over talent. That's not to say you don't have to work hard, as understeer and oversteer are still both factors should you push your luck, however both are readily catchable with the right input. Both the AI drivers ability and the way in which penalties are presented have been tweaked, improving on some of the flaws of the last game. As a reference I also ran the RB9 around Montreal and my best time in a 5 lap stint was: 1.15:520

The young drivers test that made it's first outing in 2012 returns to greet you at the start of the game and although I wanted to dive straight into the classic stuff, I did circle back to complete the various challenges. Expanding on the challenges presented to the gamer in 2012 the YDT is a lead in for those perhaps not au fait with the sporting and technical regulations of the racing. The more hardened fan will however find some of the challenges a little tedious reaching for the skip button, as I completed all the challenges rather effortlessly with a majority of gold medals.

A welcomed invigoration of the Proving Grounds section also see's many more challenges available to the gamer. These challenges sometimes represent historic moments in Formula One, (albeit in their modern vehicle) none more so than the last bronze challenge that replicates Lewis Hamiltons last few laps at Interlagos in 2008. I hope that via DLC the team are able to produce more of these challenges as it's certainly a way of adding longevity to this years title. Career mode is something that is once again slightly re-jigged but largely overlooked and although the team will face a massive challenge giving a representative feeling for 2014 this is now an area I feel they will be looking to make progression in.  The saving grace for me in terms of GP & Career mode is the ability to now save mid way through a race.  This is invaluable for people like me who struggle for game time.
With the Codemasters team almost certainly now fully concentrated on 2014 and the associated new technologies (much like the real F1 teams) I'd love it if for 2014 they could expand upon the Racenet challenges currently being run to encompass a 'Race Weekend' challenge, whereby after qualifying the real grid is assembled for you to race against.

I'm now left wondering whether Codemasters are able to re-introduce cars, drivers and circuits that have featured in past incarnations of their game via DLC. This would give us a tantalizing roster of drivers, cars and circuits that aren't currently available. The cars would of course be the stars for me if that were to come to fruition with the likes of the BrawnGP BGP001 and Red Bull RB7 available, whereas it could increase the circuit count by adding the Turkish GP, the Valencia street circuit, Silverstone's old GP layout and Hockenheim. Of course much like we see in other games these would come at some financial cost but I'd expect this to encourage Codemasters to further develop the 'Classic' feature further down the line.

Codemasters have always tried to strike a chord between the F1 fans that are more casual gamers with those that are looking for a simulation. The problem sometimes is that you end up in an awkward half way house that no-one likes. You simply cannot deny that visually and audibly the team have it absolutely bang on the money but when it comes to getting screwed down right into the nitty gritty does it fall short? The largest problems they face are they're their own worst critics and feel perfection is never achieved for this reason alone they would make a great F1 team, striving for perfection is quintessentially what the teams and drivers are looking to achieve. Balancing the wants and needs on gamers whom use both a standard gamepad with those who invest £100's if not £1000's in game wheels, pedals, gaming rigs etc is a massive task and one I don't envy. Personally I lack the time or aptitude to work on a simulator and so feel that for a game that needs to attract as many people to purchase it as possible (as lest we forget that anything that bears F1's name is inordinately expensive) it does a fantastic job of recreating both the contemporary and historic racing and so implore you to give it a try.