The penultimate race of the season saw the teams descend on a firm fans favourite, the circuit of the America's in Austin.  Unlike many of the other Tilkedromes this circuit seems to have been warmed to by the fans and boasts a layout that utilises elevation change to challenge the drivers.  In terms of development we are of course at a point in the season where only nuances differentiate the packages but there is also signs of elements that can be carried over into 2014.

I can't really do a technical roundup without mentioning what tech fans were treated to during FP3 on Saturday morning, which was the visual formation of vortices in the damp/humid conditions.  Whenever this sort of climatic conditions are available during race weekends we get to see Rear Wing tip vortices but such were the conditions in Austin that we were also treated to vortices emanating from the Front Wing.

Other outlets including Sky (below) have attempted to cover what was being seen but let's have a better investigation seeing as there isn't so much to cover.

The 'Y250' as it is being explained by Martin is a point 250mm from the centreline of the car, this is one of the area's of designing a Formula One car that is placed under scrutiny.  When the new rules were drawn up for 2009 the FIA set about mandating the central section of the Front Wing's mainplane to stop teams running full length flaps and also rob the teams of a method of controlling the airflow onward towards the floor.

The use of the Y250 Vortices isn't new and teams have been using them for some time, as always though the maturity of how this is achieved is increased over time and some teams will utilise it better than others to meet a specific goal.  A Vortex (or vortices in the plural) are the consequence of two different pressure gradients colliding, they can be both useful and destructive depending on an array of factors, not limited to intensity, speed and placement.  A vortex that is present at the trailing edge or tip of a surface will also have a small penalty in drag and will likely lead to the breakdown of efficiency in a wings span.

In the case of the two cars in the footage above let's take a look at their Front Wing's to discern the difference in vortex formation that was being talked about. 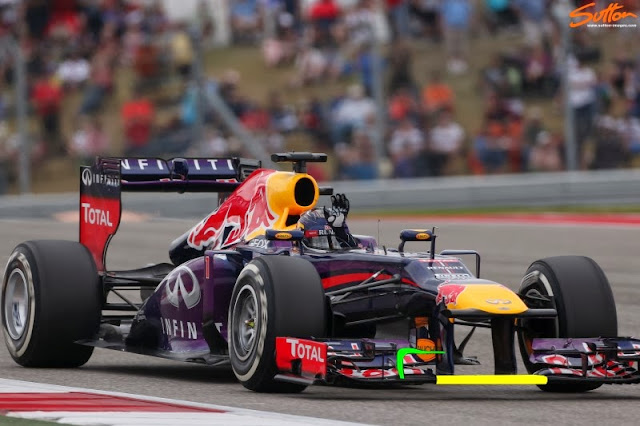 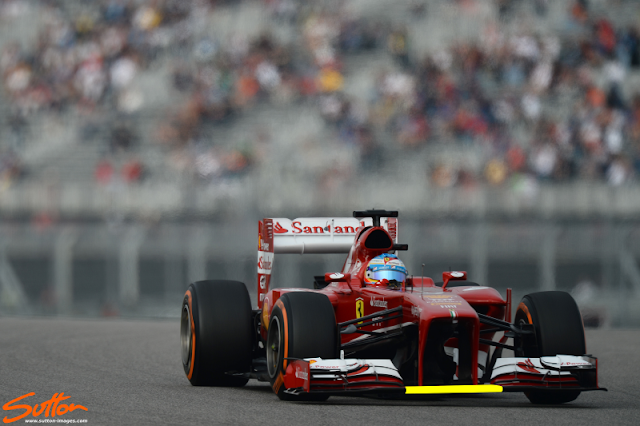 You will notice in the pictures above I have marked the Y250 area of the Front Wing's mainplane in yellow, it is the periphery of this area that is of most interest as it's where the flaps' limits are.  The flap tips are where the vortex is generated as the low and higher pressures collide.  Although both Red Bull and Ferrari operate with what we call 7 Tier front wings, the 7 tiers are presented at the most outboard sections of the wing to aid in it's efficiency at high and low speeds.  At the inbound end (Y250) we find that the lowest flaps are designed very similarly to meet with the mandated section of the mainplane (albeit with Ferrari's newest full length flap design featuring an additional section). Above this we find that both teams run with 2 full length flaps but both with very different design ethos', whereas Ferrari's upper flaps follow the curvature of the lower flaps, Red Bull's are a much straighter design.  This leads to a much tighter entwining of the trailing vortex emanating from the Ferrari Front Wing whilst also increasing it's intensity/speed.
Red Bull however utilise an 'r' cascade ahead of the flaps (marked in green) that in combination with the flaps tips behind it help to create a much more controlled and elongated vortex. 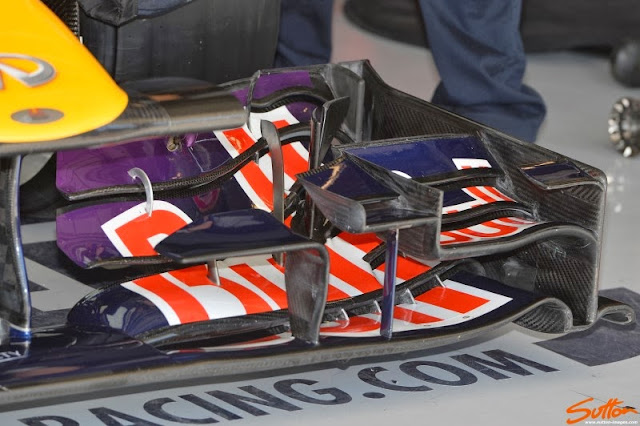 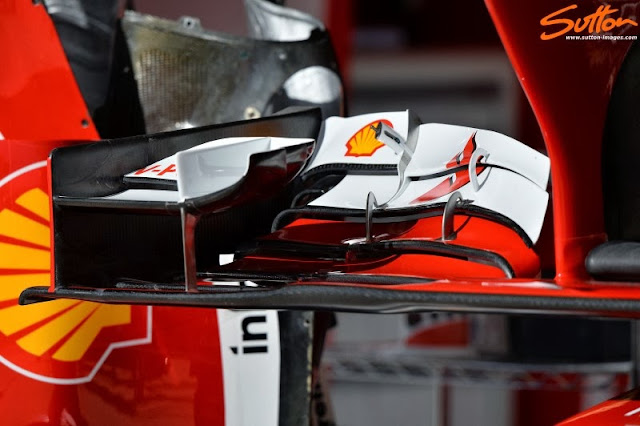 The interesting aspect is the development curve of Ferrari's Front Wing as they have only migrated to the full length 5 flap variant over the course of this season in an attempt to extract more performance from the front portion of the Sidepod which of course is designed to extract more from the exhaust. 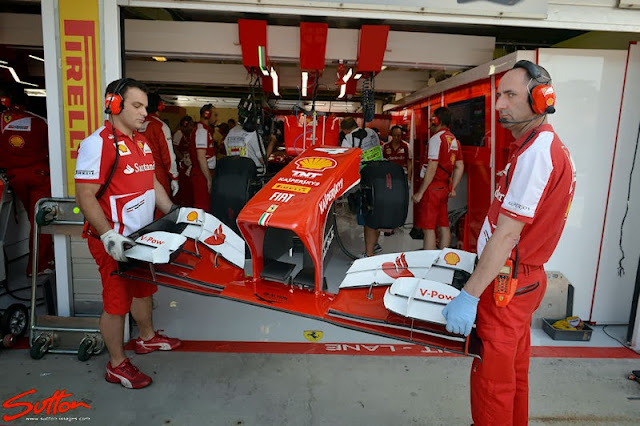 As we can see in the older configuration above the secondary flap's junction with the mandated Y250 section isn't split into 3. 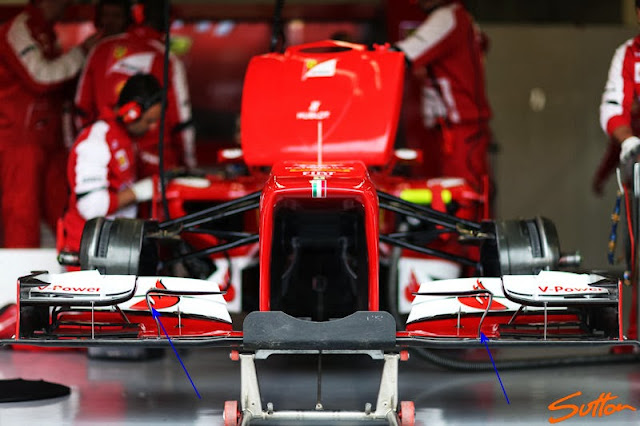 Furthermore we can see during the development phase Ferrari very briefly trialled 'r' cascades at Silverstone, trialling them during Free Practice but they never saw the light of day again.  Most likely because as we can see their trajectory doesn't align in the same way that Red Bull use them in combination with the flaps tips aft of them.

The use of the Vortex by the teams is to shield the airflow that runs centrally through the Y250 from the impinging airflow discarded by the tyres (especially in yaw) enabling the floor to operate more effectively.  In the case of Ferrari it's clear to see that they are also targeting this Vortex at the base of the Sidepod Airflow Conditioner and moreover the Vane that protrudes from it.  This Vane further increases the Vortex that is shed in order to try and protect the airflow regime of the Sidepod. 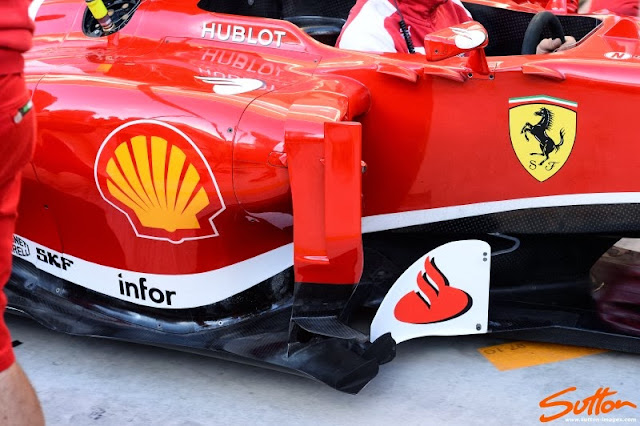 Above: Ferrari once again trialled their newer version of the curved Sidepod Airflow Conditioner which joins to the shoulder of the Sidepod but failed to use it during Qualifying and the Race. 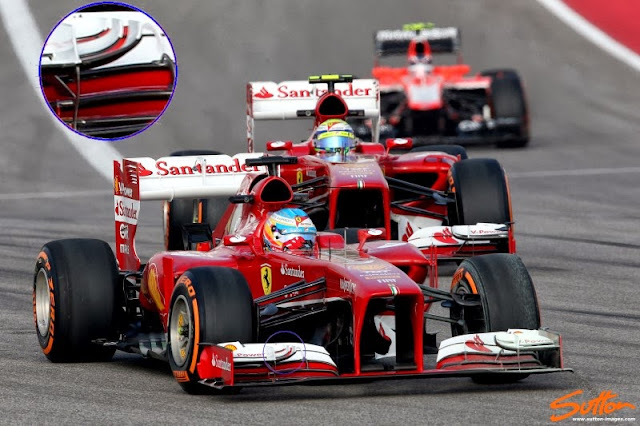 Another minor alteration to Ferrari's Front Wing came in the form of a further serration to the inbound Cascade in Austin.  Designed to move airflow around the car's front tyre adding an additional slot will make the section operate differently over a varied speed threshold. 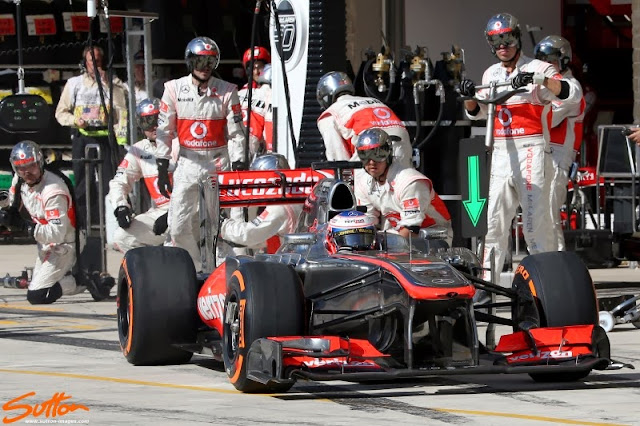 Above: During the first lap of the race Jenson Button was involved in a collision that ripped off the driver's front left Endplate and Cascade.  Although Jenson was able to continue throughout the race without changing Front Wing's it's inevitable his performance was compromised by the car washing out throughout the corners.  His saving grace was the relatively low degradation that the Pirelli's showed in Austin as the front left could have worn much more heavily had the tyre manufacturer's choice been more bold. 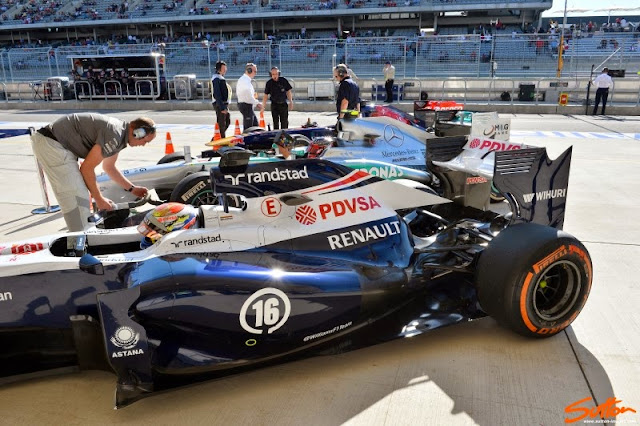 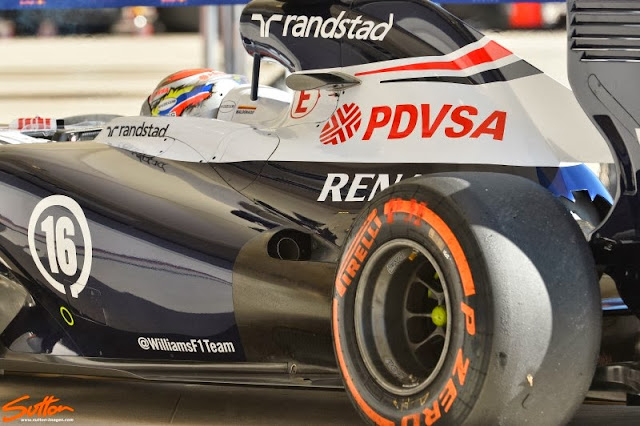 Williams once again opted to run the FW35 without the 'Coanda' exhaust arrangement in Austin, it's use leads to a much less peaky car making it a much easier car for the driver's to handle.  A small increase in power is also available with the exhaust not requiring such a torturous adventure to come to it's climax whilst mapping is also less constrained.  Although positioned much further up on the bodywork and seemingly pointing upward the exhaust plume will still be directed onto the rear of the floor (above the diffuser) by virtue of the airflow 'downwashing' over the Sidepod.  The effect on 'Sealing' the diffuser is lessened with the downwash style exhaust, as the 'Coanda' exhaust when implemented efficiently is targeted between the tyre and diffuser to create an air skirt.  The problem with the 'Coanda' effect exhaust however is that when 'Off Throttle' the plume dissipates and requires the targeting to be quite accurate, this is why Williams have struggled throughout the season.  Their initial foray into exhaust designs in pre-season led them down several paths, I often wonder why the persevered with the Semi-Coanda exhaust and not the Cross Under Tunnel Ramped version they also tested.  Especially when the other 2 Renault teams of Red Bull and Lotus have used it to good effect. 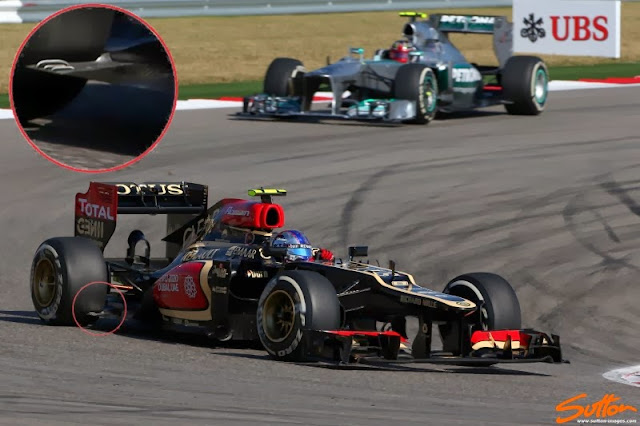 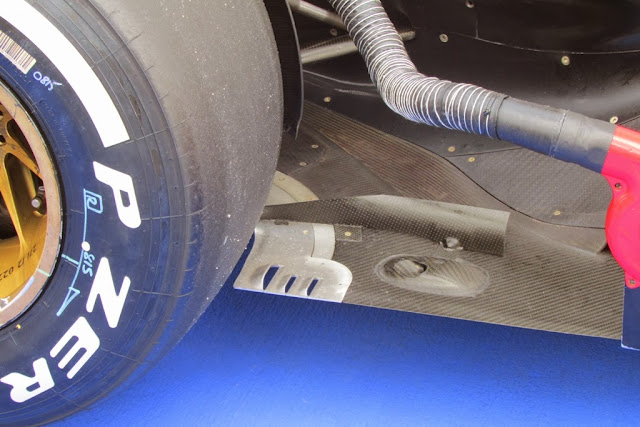 Perhaps with an eye on 2014 and the impending loss of Diffuser sealing from the exhaust, Lotus introduced 3 Tyre Squirt Slots ahead of the rear wheels where previously the team have only utilised 1 with a triangular upflick on the outer periphery. 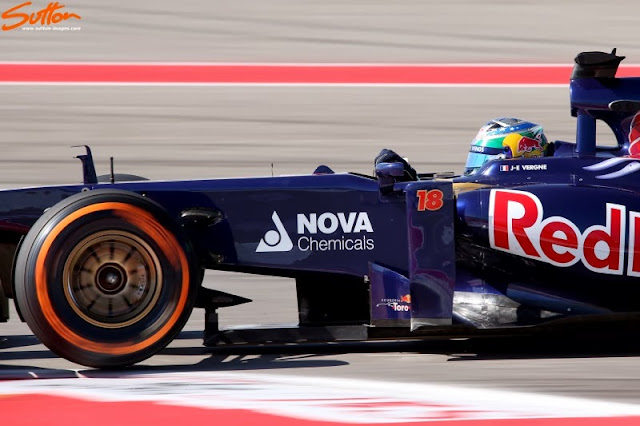 During the Free Practice sessions I noted that Toro Rosso were using a much larger sensor under the chassis to which the Splitter stay was mounted.