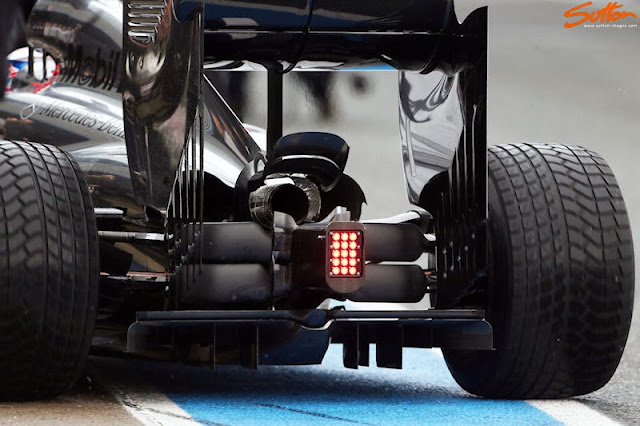 The season might seem a long way off for some people but with all but the Lotus and Marussia having physically broken cover (at the time of writing as the Marussia will come from under the covers shortly), McLaren have already pulled the wraps off what some may consider to be a silver bullet. 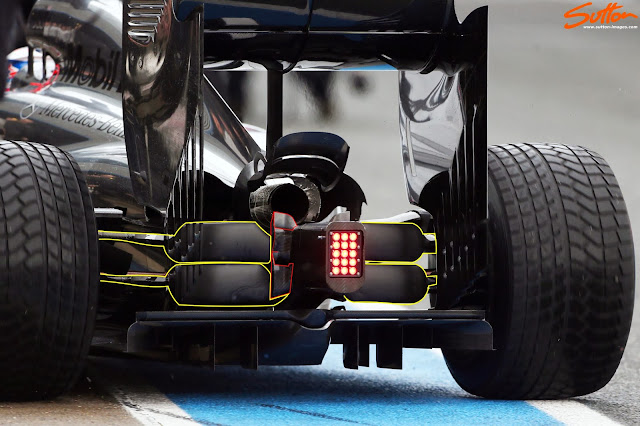 At first glance you'd be mistaken for thinking that McLaren still have a Beam Wing running horizontally across the Rear Wing structure but at second glance it's clear to see that there are 2 structures in front of the Rear Wing (Highlighted in Yellow).  Furthermore from this image alone you cannot infer depth and so it looks like the suspensions Wishbones (rear section of the upper and lower arms) have been flipped vertically.


(Click on the Images to them in full resolution) 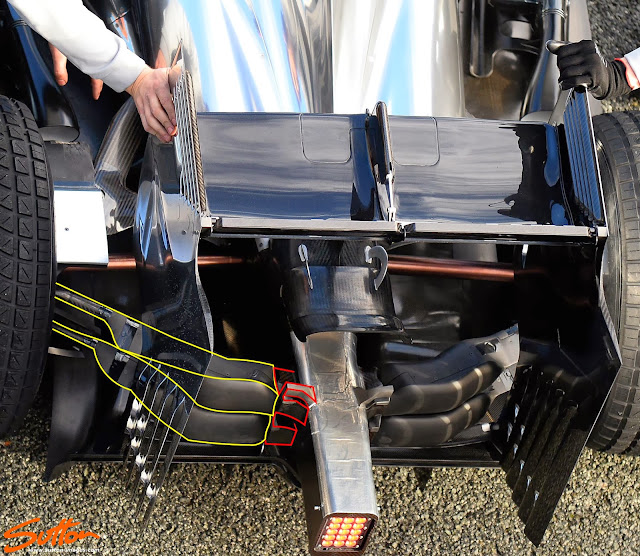 What we can see from the top down view is that the team have simply designed a much boxier version of their Wishbones, getting thinner at the point around the Endplate.

The regulations surrounding Suspension elements that these boxier 'Wishbone Wings' circumnavigate are:
10.3.1 With the exception of minimal local changes of section for the passage of hydraulic brake lines, electrical wiring and wheel tethers or the attachment of flexures, rod ends and spherical bearings, the cross-sections of each member of every suspension component, when taken normal to a straight line between the inner and outer attachment points,must :
a) Intersect the straight line between the inner and outer attachment points.
b) Have a major axis no greater than 100mm.
c) Have an aspect ratio no greater than 3.5:1.
d) Have no dimension which exceeds 100mm.
The major axis will be defined as the largest axis of symmetry of any such cross-section. The length of the intersection of this axis with the cross-section must not be less than 95% of the maximum dimension of the section.
10.3.3 No major axis of a cross section of a suspension member, when assessed in accordance with Article 10.3.1, may subtend an angle greater than 5° to the reference plane when projected onto, and normal to, a vertical plane on the car centre line with the car set to the nominal design ride height. 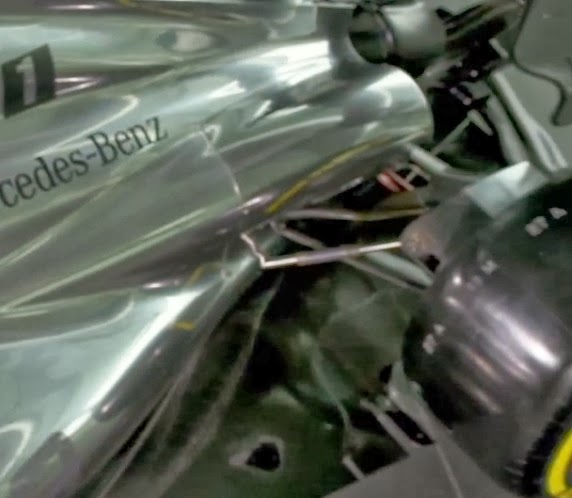 If we now look back at the launch image I used to show the rear suspension we can see that the Wishbones are shaped into 2 sections,  a shorter chord at the inner section and wider profile outbound of that.  Furthermore as part of the crash structure we also find the Wishbones to be mounted within what look like aero shaped fins.  If you now re-check the images above you'll see I have marked two sections in Red.  These sections are further additions run on the car with the Wishbone Wings, allowing airflow to bleed out the central portion of the car and interact with the exhaust plume. 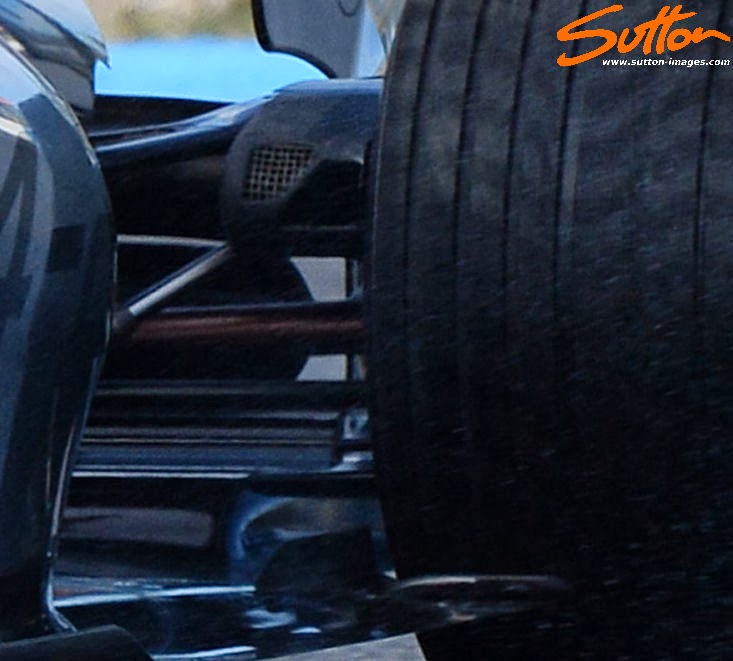 As we can see on the left the Wishbone Wings aren't simply flat fronted boxes but due to the aspect ratio and 5 degree rules, they can't simply be made into upturned foils/wings in full replication of the Beam Wing.

The other thing to consider here is that the wishbones are moving entities and so the gap between both elements will change based on the attitude of the car.

This is where it gets tricky as both the airspeed will change under braking and acceleration as does the gap between the profiles meaning airflow attachment could become an issue especially with sudden changes of direction.
A brilliant overhead shout of the car

I realise that Gary Anderson has already weighed in on the topic stating that if this does turn out to be a silver bullet it could be difficult for some of the other teams to implement.  I'd have to agree to some extent but if it is seen as worthwhile they will all try to integrate it, however it would undoubtedly effect the teams with enclosed driveshafts more (aka Red Bull, Mercedes & Toro Rosso) due to the way in which the geometry of their suspension etc is designed. 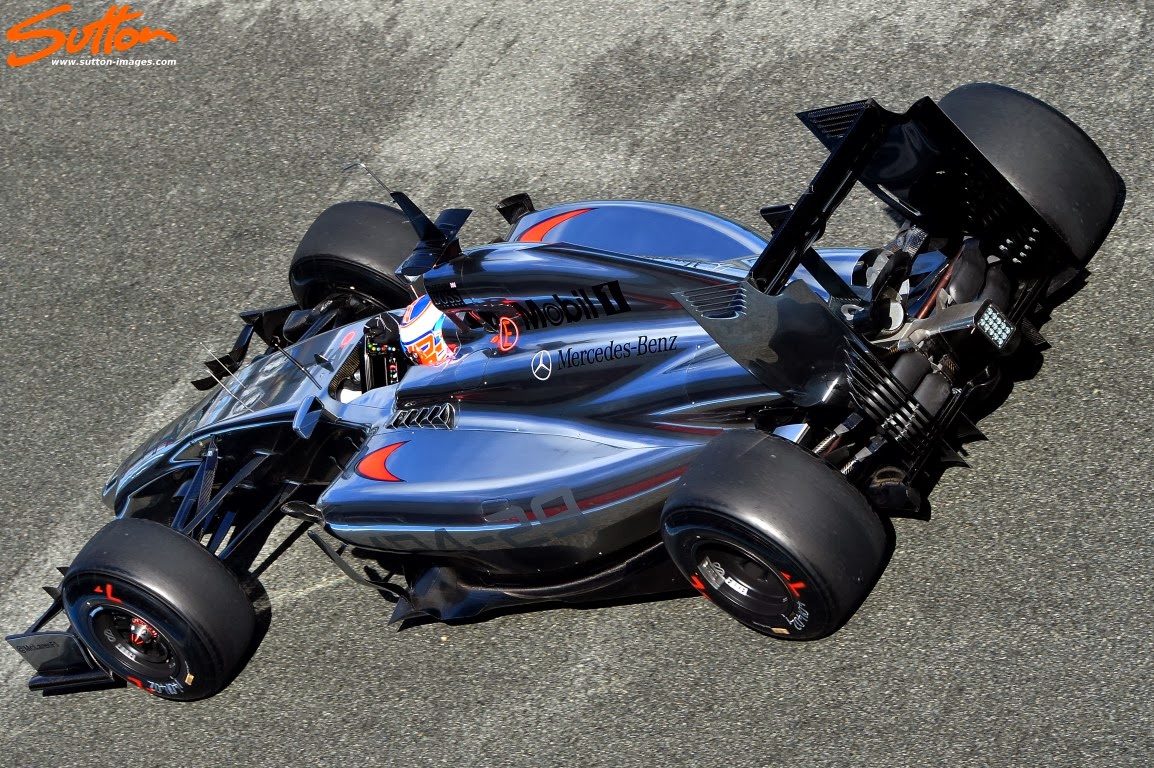 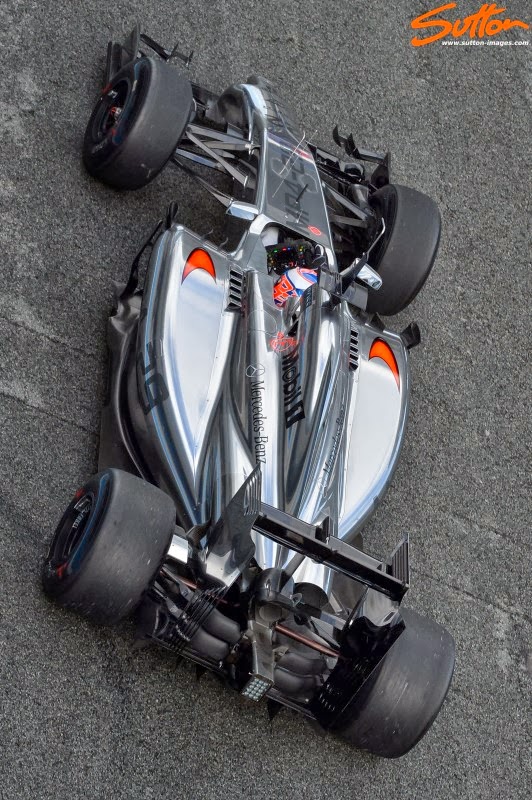 I look forward to seeing this development evolve as it's clearly only in the beta stages and will update the article with more images etc when they become available.

As traffic is filtering back to this article I'll point out a few extra things about the Wishbone Wings that perhaps weren't present in this original article:

I looked at the Wishbone Wings in more concise detail here: 'Wishbone Wings' analysed and explained furthermore I showed a tech colleague this picture over on Twitter this morning alluding to the fact that McLaren like Toro Rosso and Williams are also utilising a structural and aerodynamic lower wing element which will further enhance the airflow structures and the way they all link together.  (See also: Bite Size Tech: McLaren MP4-29 Rear Wing Endplates that create 'upwash') 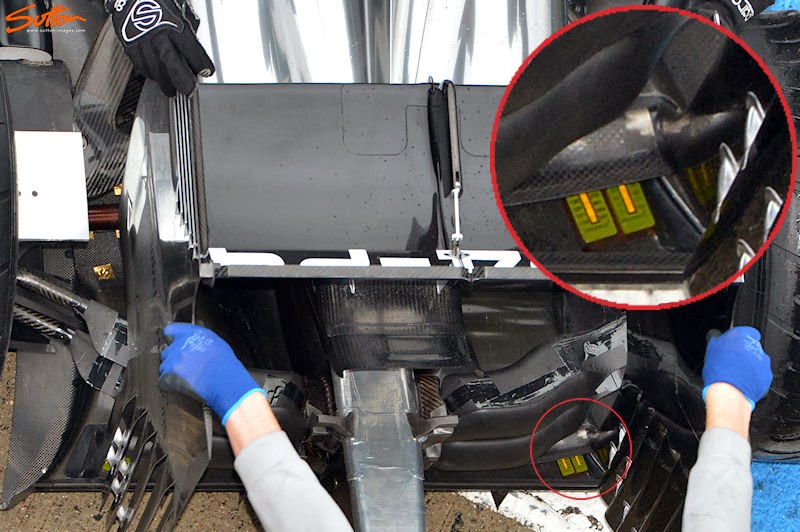