The first day of 2014 testing came to an abrupt end for Mercedes as the car carrered off the circuit at the hands of Lewis Hamilton in turn 1, after completing several laps of Jerez.

The failure was reminiscent of what happened to Hamilton at the circuit last season. The cause of the failure has yet to be firmly ascertained but from looking at the images at the circuit it seems the connecting pylons failed, turning the car into an uncontrollable sled as the front wing lodged itself under the front wheels. 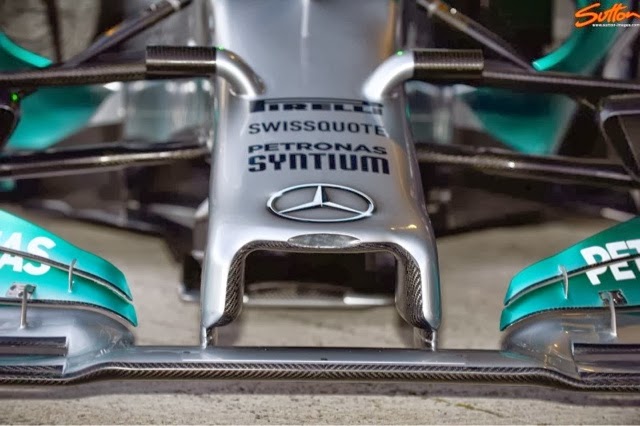 The connecting pylons that failed are the much narrower sections at the base of the connection between the nose and wing. The pylons are only permitted to be 25mm wide whereas the wider section above this is Mercedes way of circumnavigating the new nose regs. One of those wider sections is actually 50mm longer than the other and a vanity panel replicates the symmetry on the other side. Full analysis of the car/nose here: http://somersf1.blogspot.co.uk/2014/01/mercedes-amg-wo5-technical-launch.html?m=1

With one or both of the thinner pylons having likely failed under braking the nose will have twisted as it ripped the vanity panel away from the crash structure and folded the whole structure under the car. 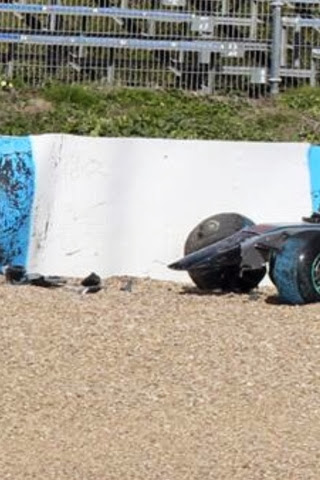 It would appear that the front of the front impact structure sheared off (one of the teeth) which is good in some ways but just goes to show the mockery the teams make of the rules.