Sauber's is a launch I always look forward to, as one of the midfield teams they don't tend to be too shy about revealing almost all of the package at launch whereas others tend to hide many details.  The Swiss team based in Hinwil are one of the teams earmarked to be struggling financially.  Although they have some fantastic infrastructure in place most of this came from their time under BMW ownership.  That's not to say they haven't been investing though but without major investment like BMW offered everything suffers.
I was impressed by some of the adventurous design decisions the team took with the C32 but their failure to understand the sidewall deformation of the early 2013 tyres hindered their ambitions last season, leading to several backwards steps before being revitalised when the 2012 construction reappeared mid-season. 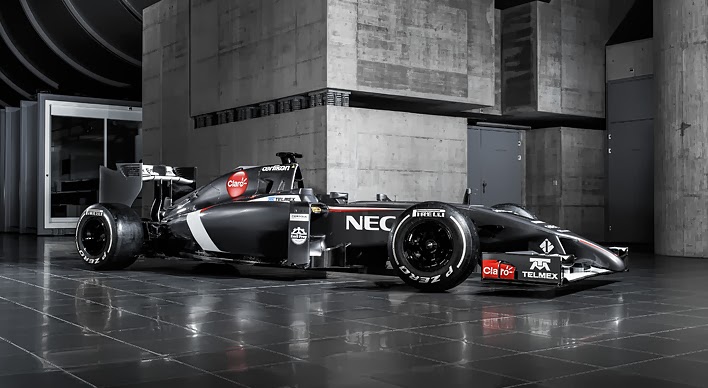 The C33 was scheduled for release at 4pm CET but unfortunately Sauber inadvertently left the door open and the cat came out the bag a little early.  When I released the image we can see above on Twitter it was available on their website (granted somewhat hidden away, but still out there, I did however change the URL strand in order to get the side view too which caused somewhat of a rumpus over on twitter) 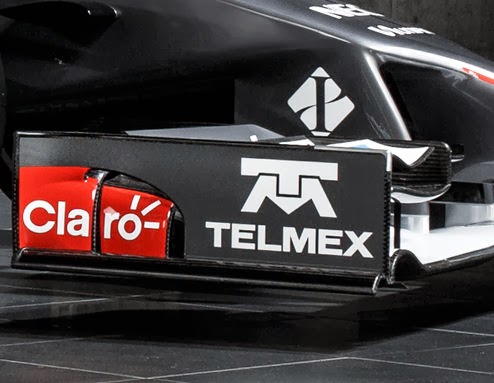 Sauber's design philosophy in terms of the Front Wing Endplates has been opposition to many of their counterparts of the last few seasons but the C33 changes that.  With a premium on conditioning space now the Front Wings overall width has been reduced by 150mm (75mm either side) Sauber have ditched their previously vulumptious curving Endplate in favour of a straight edged one.  The Endplates hooked, allowing for the upper deltoid flaps to curve over to join with the outer footplate.  The team have retained their approach to Cascades with the larger outbound one having a 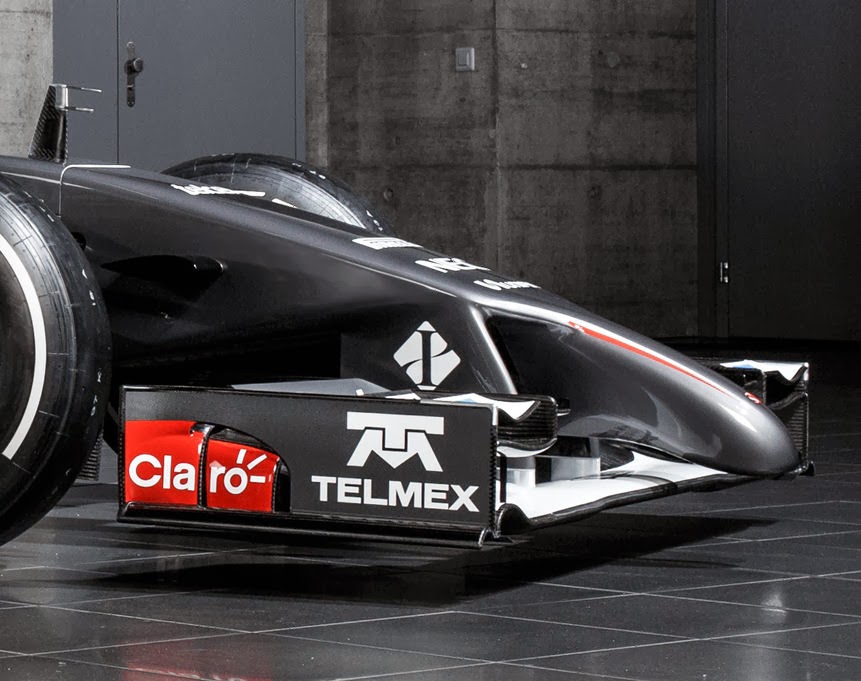 It's obviously not the first one we have seen and is implemented in a different way to some of the others before it but Sauber have also gone down the 'Finger' nose route. Taking the wedge shaped rear section of the nose upto it's maximum position affords the designers the opportunity to drive as much air under the chassis as possible.  The connecting wing pylons are designed to maximise the amount of airflow that can pass between them and the 'finger' portion of the nose.
The pylons are angled inward to invoke a Venturi style effect speeding up the airflow as it passes along the central portion of the car. 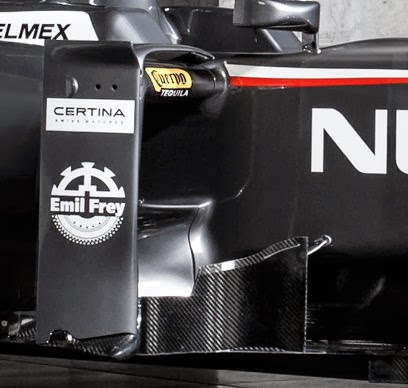 From the angles provided it's difficult to ascertain as to just how slim the C33's Sidepods are but suffice to say that Ferrari must have done an exceptional job with the thermal efficiency of their Powerunit.  A deep undercut is framed by a fairly standard Airflow Conditioner, however the team are once again using a leading edge slat over the top of the Sidepod to increase the speed threshold operating window of the Sidepod. (ie the airflow that passes over a surface will become detached at differing speeds due to surface length and angle of attack, the slat broadens this window)

The Sidepods reach around to the rear of the car and retain a fairly flat upper profile in comparison to some of the other cars we have seen thus far.  That however means that a nice undercut is available so the airflow can make its way into the coke bottle region.  A rearward shot will definitively prove the outlets position but it would appear that is taken car of alongside the exhaust outlet at the rear of the car. 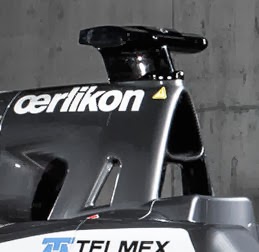 Following in Ferrari's footsteps we see that Sauber have also triangulated their airbox and as I mentioned in the Ferrari analysis this could be done to suit the resonating characteristics of that engine.

The roll hoop features a significant undercut which helps in reducing blockage to the rear of the car and rear wing.  The Airbox inlet is supported by 4 spars in order to increase rigidity and create the large undercut. 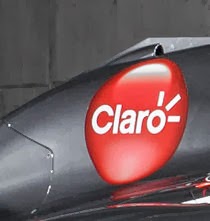 A little aft of the main airbox inlet the team have not only a small 'Mohican' in order to meet the dimensional regulations for the area but also a Snorkel either side of the appendage.  These are likely placed here in order to cool the Turbo which will lie a little below and behind it.  (The Turbo of course is capable of 125,000rpm) 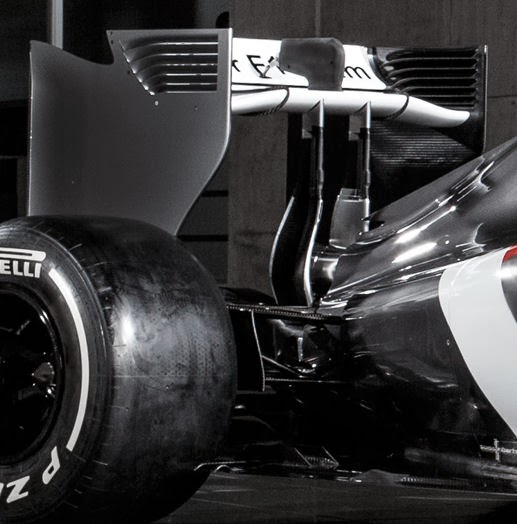 Just like the Ferrari, Sauber have decided to mount their rear wing on dual pylons that bow out to the maximum 200mm width around the exhaust.  Unlike Ferrari's though the pylons do not reach forward and arc into a swan neck shape retaining more of a straight leading edge.  The Rear Wings Mainplane is shaped in order to facilitate the use of the pylons with the central portion raised.  A extremely rudimentary set of Endplates are shown which I'd guess will be replaced when the car goes out for some runs in testing. 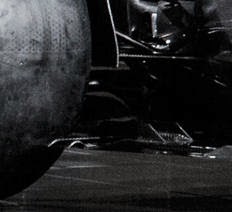 Ahead of the rear wheels is a crucial area of development for the forthcoming season with teams looking to minimise the amount of tyre squirt impinging on the Diffuser.  (Tyre Squirt is the lateral flow of air pushed into the Diffusers path as the tyre deforms under load.  The problem was all but eradicated with EBD's but with the exhaust position all but ruling out the effect the teams have to work on other aspects with which to recover the losses)
As seen here in these pictures the Sauber not only implements several Tyre Squirt Slots (cuts in the floors periphery) 2 additional Vertical Strakes are mounted inbound.  The slots allow ariflow to move 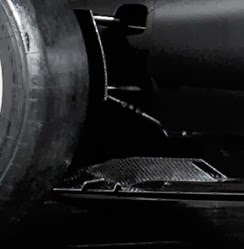 between both the upper and lower surface of the
floor therefore conditioning the flow before it reaches the spinning tyre.  The twin strake arrangement is something that proliferated the RB9's floor for some time at the tail end of 2013 and whilst McLaren tested a similar solution at one of the latter races, Red Bull remained the only team to actually race them in that position.  The strakes work with the tyre squirt slots to both intensify and vortices the airflow before it reaches the tyre with the intent of minimizing the lateral squirt of airflow into the Diffuser as the tyre deforms.  I look forward to seeing the development in this area, not only on the C33 but other teams as they look to manage this issue.

I will continue to update the piece as more images become available of the C33 over the coming days.