Toro Rosso always seen as the minnow to it's big brother Red Bull Racing have been busy investing in staff and infrastructure at their Faenza base.  James Key was placed as Technical Director at a critical point in the gestation phase of the 2014 project and so with some restructuring I'm expecting a pragmatic car to be revealed.  James was recruited from Sauber in September 2012 just at the right time to steer the ship in the right direction. Of course with Toro Rosso joining the Renault ranks alongside their big brother it's perhaps lessened the chassis development curve, as both teams work with the RBT (Red Bull Technology) arm of the group.  Just as the Toro Rosso team is seen as a development vehicle for their drivers it will be interesting to see if James has been lined up as a future successor to Adrian when he decides to leave Red Bull Racing. 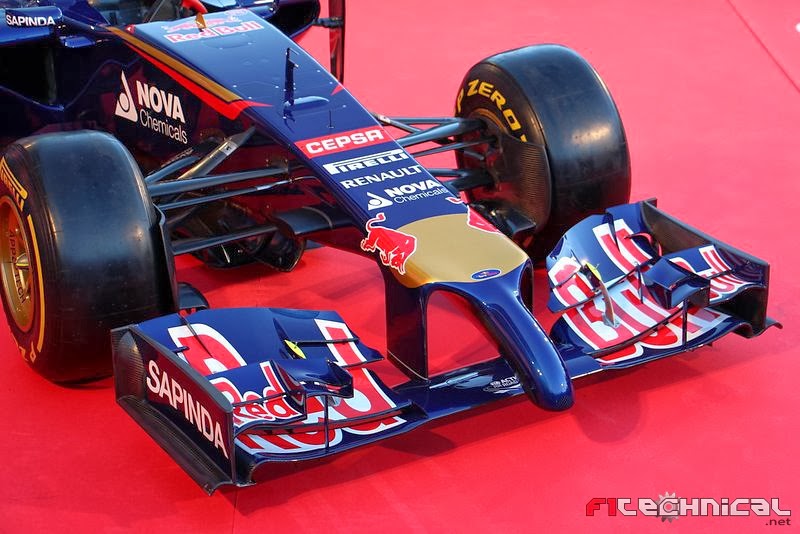 Plausibly a placeholder for the launch the Front Wing is reminiscent of the late season STR8 design featuring a basic Endplate with a section cutout at the rear to facilitate the movement of airflow outbound of the front tyre.  The Mainplane and Upper Flap find themselves dissected into 2 sections each, all of which are designed to not only increase efficiency at the outboard end of the wing but assist in the generation and harnessing of the Y250 Vortex. 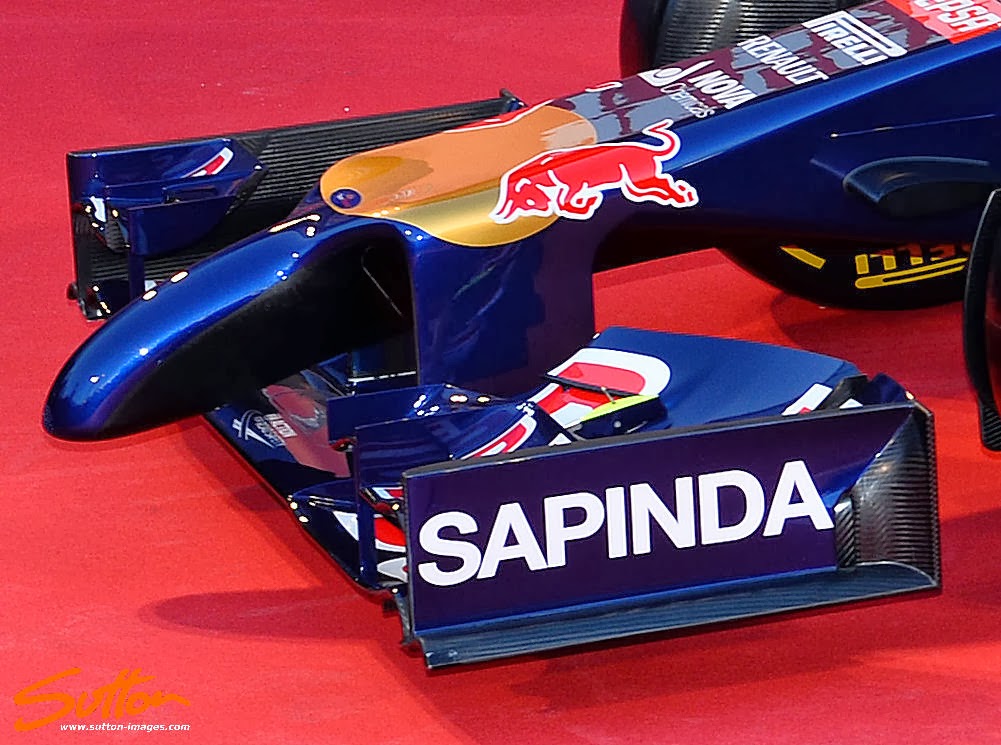 The STR9 joins the list of teams sporting the 'Finger' style nose, however with a fairly long finger section the drooping of the 'finger' isn't as aggressive as say the McLaren MP4-29's.  Meanwhile at the section where it meets with the wedge upper/rearward section the 'Finger' takes an inward curve to allow the maximum amount of airflow to pass under the nose and between the pylons. Unlike some of the other teams who've utilised the 'Finger' nose the team aren't too concerned with the shaping of the wedge rear section and retain a fairly straight forward design. 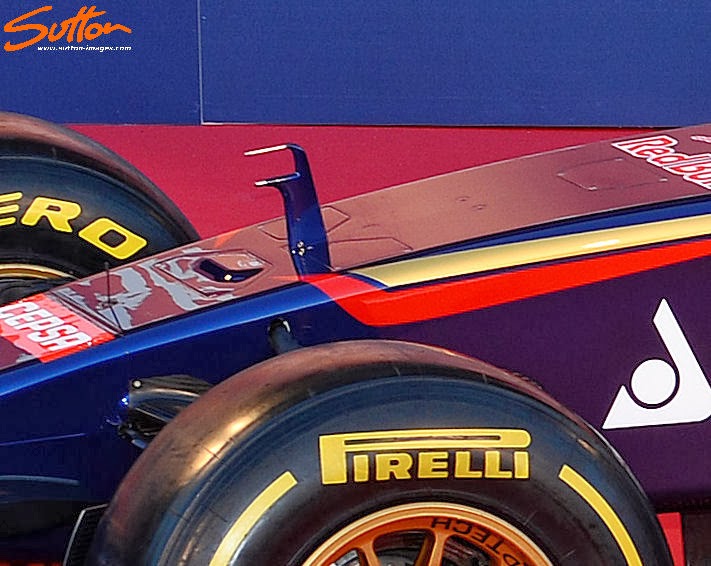 Unlike some of their rivals but unsurprisingly the team have moved their driver cooling from the nose tip up onto the top of the chassis.  Although the STR9 has cooling in the usual position on the tip of the nose we also find this small cooling hole present in the Chassis, I'll attempt to discover it's purpose in due course.  (I've also added a new picture of the nose below the main article) 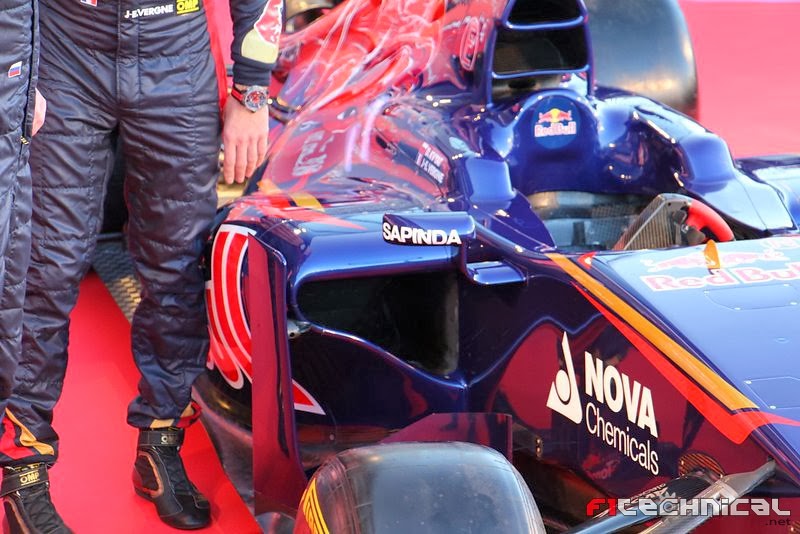 In comparison to say the Ferrari and Sauber we saw in the last 2 launches the STR9's Sidepods inlet seem a little larger.  This is shown more clearly by the shaping of the outer portion of the Sidepod which reaches over close to the edge of the floor.  At this stage only a basic airflow conditioner is shown on the floors outer edge and no Vortex Generators adorn the top of the Sidepod either.

In profile we can see just how much of the rear of the Sidepods have been shrink wrapped with the cooling exits placed well back in the coke bottle region (just before the suspension), for maximum airflow space over the rear of the cars floor. 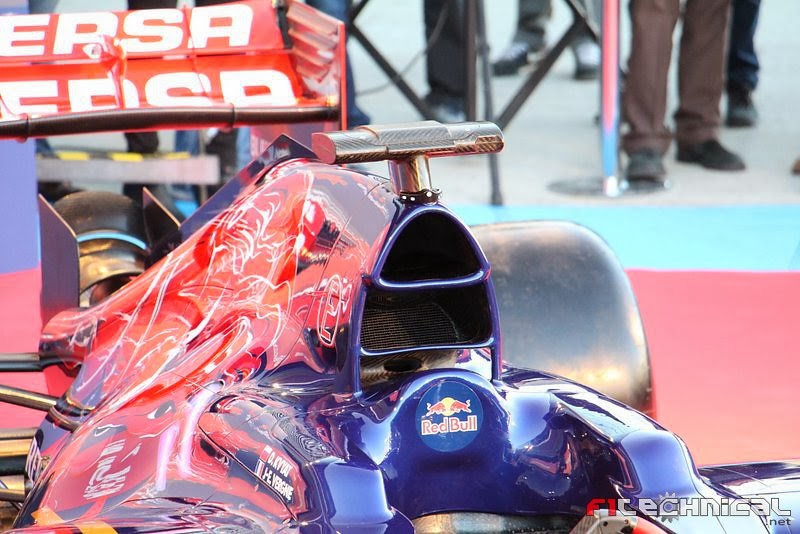 Lots of the teams which have presented their cars thus far seem to have worked heavily on increasing the undercut of the Roll Hoop whilst reducing the weight incurred.  Toro Rosso however have 2 inlets placed behind the drivers head, one smaller upper inlet which likely feeds the Turbo whilst the lower more slanted inlet is placed in a position that likely cools the engine. 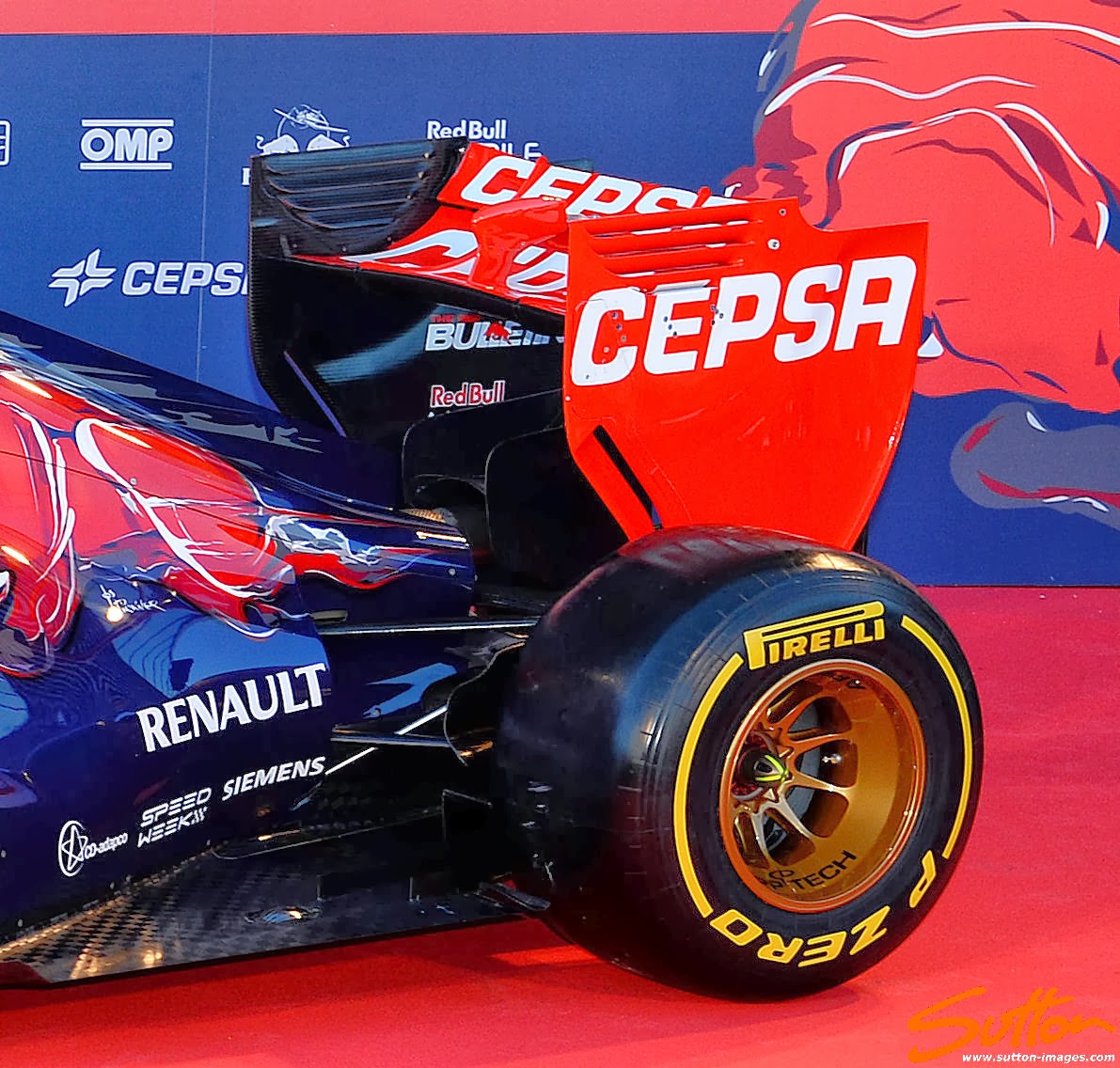 Toro Rosso retain a similar style rear wing to that, that has been on the linearage of cars before it, but the team will have had to bulk up the construction in order to affix the Endplates to the floor/diffuser.  This is because in lieu of the Beam Wing other teams have opted for centralised mounting pylons whilst Toro Rosso have not. 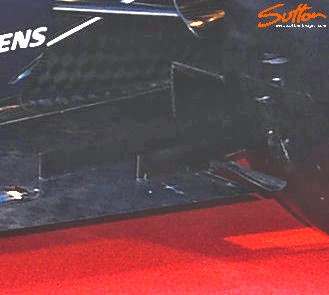 In this image that I have lightened up a little we can see that Toro Rosso have retained their approach in terms of placing tyre squirt slots in front of the rear tyre.  They have 2 Vertical floor strake just offset inbound of this that will utilse the airflow passing over the region and intensify the effect that the tyre squirt slots provide.  The Brake Duct fins above also aid in this flow regime, boxing off the flow. 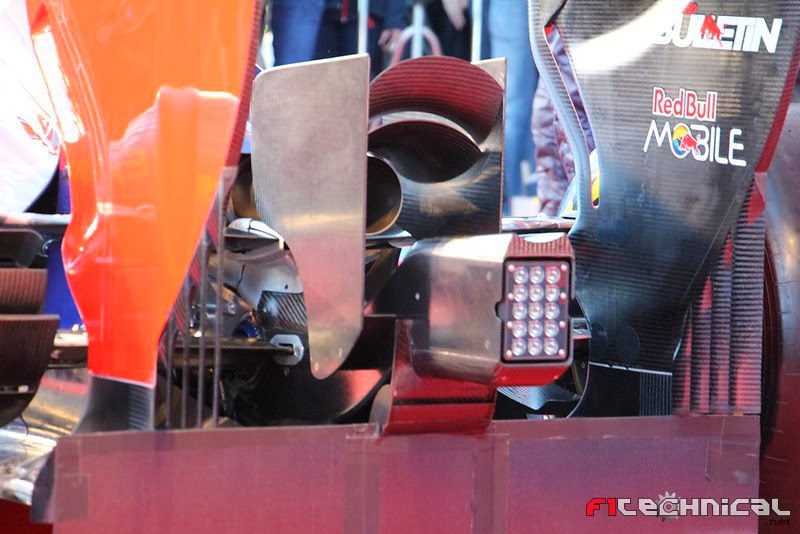 The rear of the STR9 is where the concept gets really interesting and probably gives us some clues into the design of RB10 with the two sharing a gearbox design.
The most obvious area of discusion is the Y100 (200mm) winglet which clearly maximises the new dimension in this area with it previously being a Y75 (150cm) limitation.  The increase in width of the appendage is to allow for the centreline exhaust 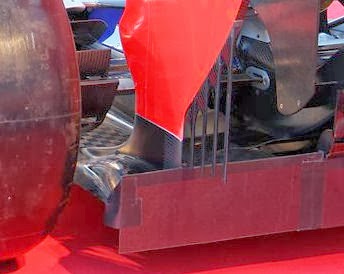 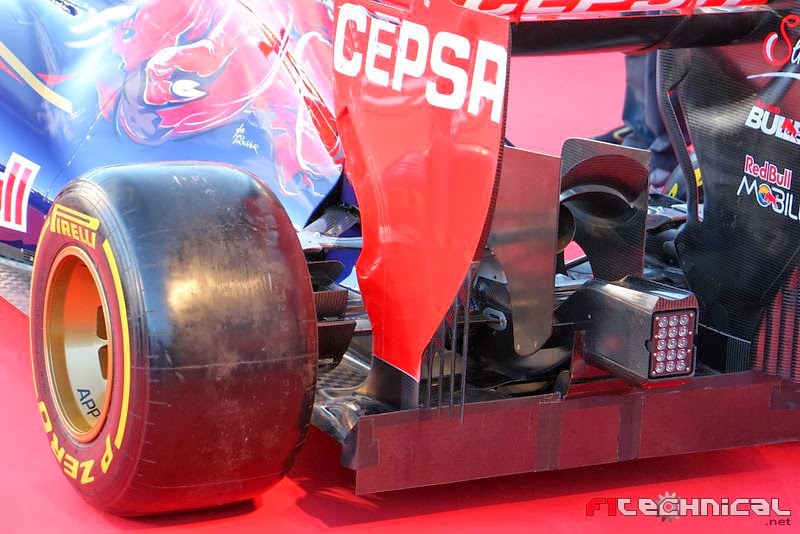 which protrudes through the middle of it and features not only it's own set of Endplates mounted to the creash structure but a twin element upper wing section in order to enhance the interaction between the Diffuser and Rear Wing.  Below the Crash Structure we can see a Winglet (same design on the STR8) is placed in the central zone in order to increase performance from the upward sweeping Crash Structure.  The team have joined their big brother in the adoption of enclosing the halfshafts within the lower suspension wishbone, which not only raises both components up off the floor for

cleaner flow but minimises the Magnus effect generated by the spinning halfshaft that disturbs the natural flow in the region.
In the lowest of the images on the left you can see that on the outer phriphery of the Diffuser the team have added coves within the floor, these will create more elongated Vortices and further minimise the problem of tyre squirt.
Difficult to see from the image but it also seems that the team have found a dimensional advantage in the rules that allow them to add another fin at floor level (Floor Blade) that adds both rigidity to the Rear Wing and aids in creating downforce. 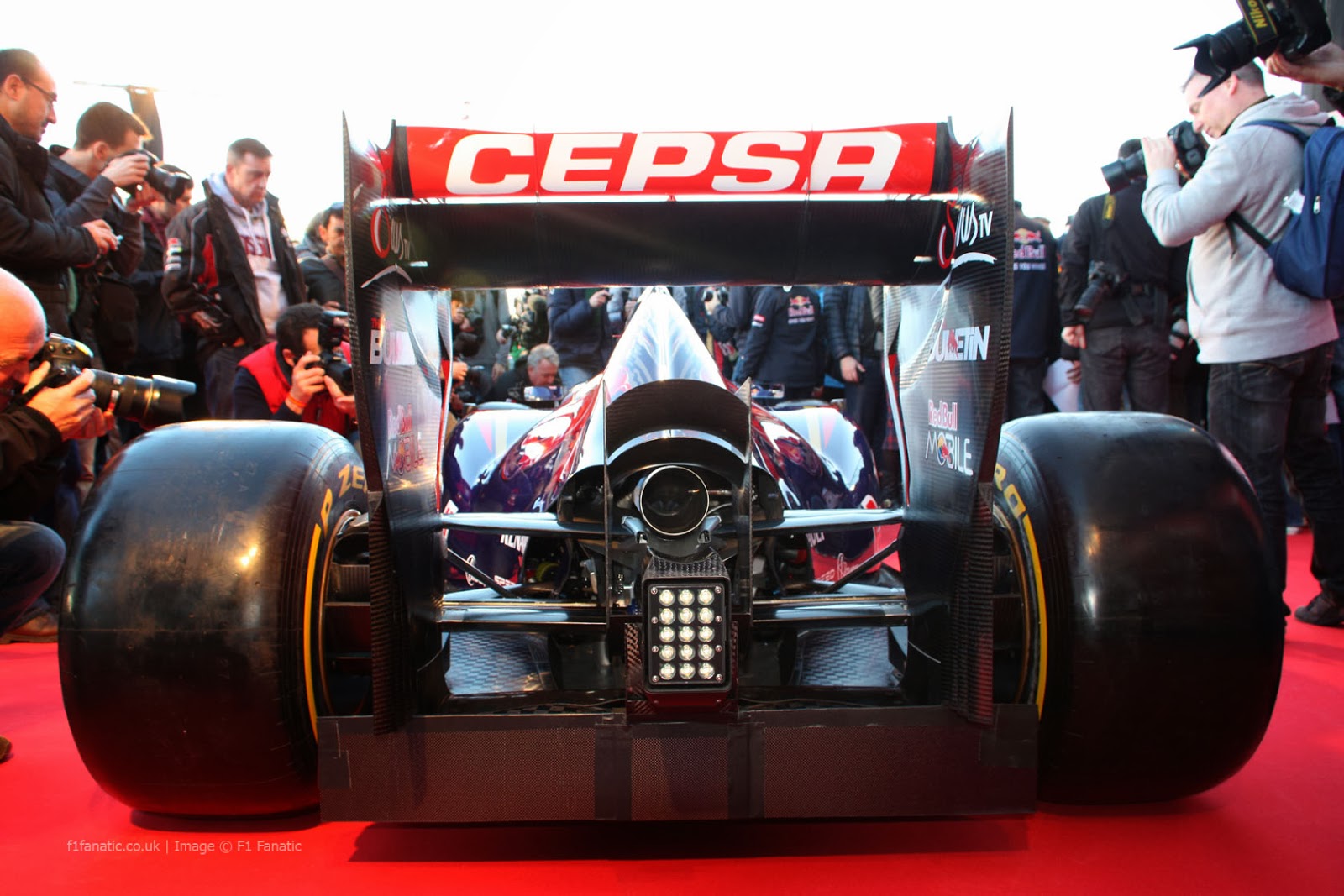 Lastly in the image above from Keith at F1 Fanatic (If you don't already visit this site please do as it's always a great source of F1 information) we get a detailed view of the cars rear end. From here we can see that the team have scalloped out the top section of the crash structure in order to maximise the cylindrical nature of the exhaust behind it.  Furthemore we find 2 small ejection holes flanking the scallop emanating from the Engine cover and likely being used to control the trajectory of the exhaust plume.  Beneath all of this we can see that the floor has also be scalloped out around the crash structure in order to maximise the shaping of it whilst also taking into account the 'Floor Blade'.

I'd like to say thanks to both Sutton Images (as always) but also a special mention from Steven (F1 Technical) for allowing me to use their images in this article. 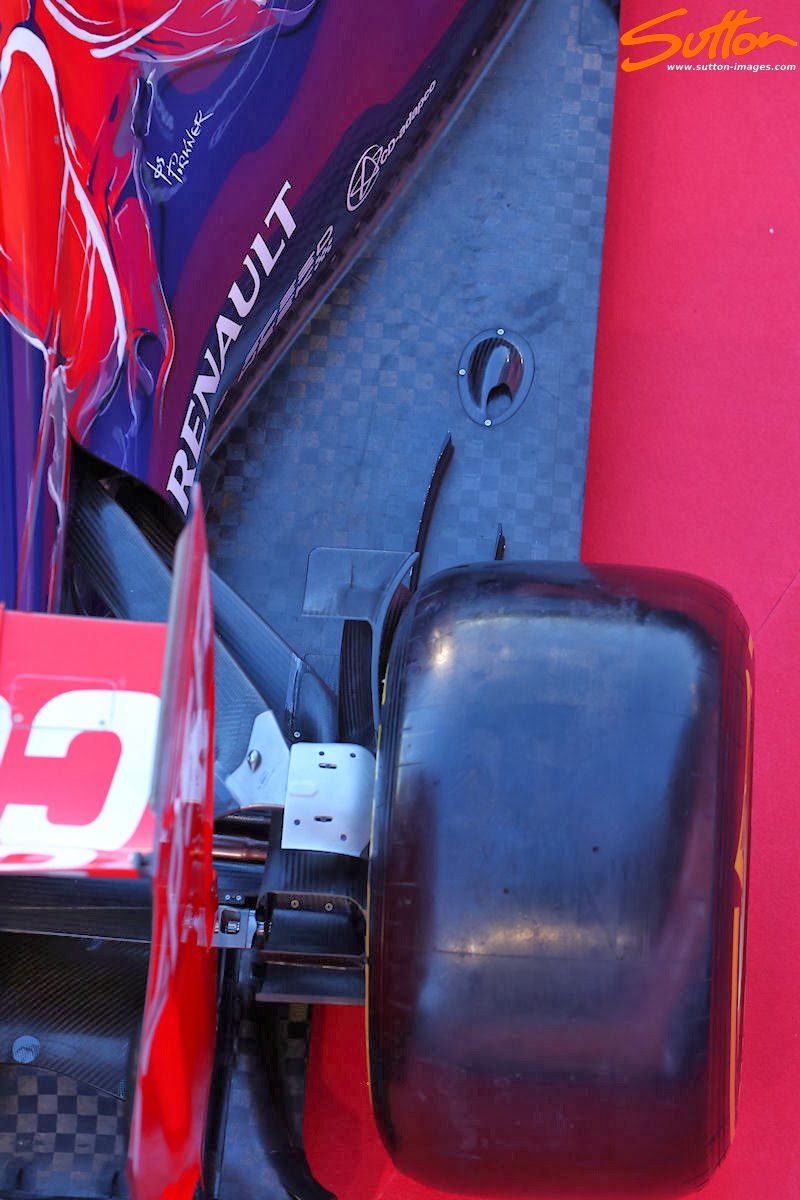 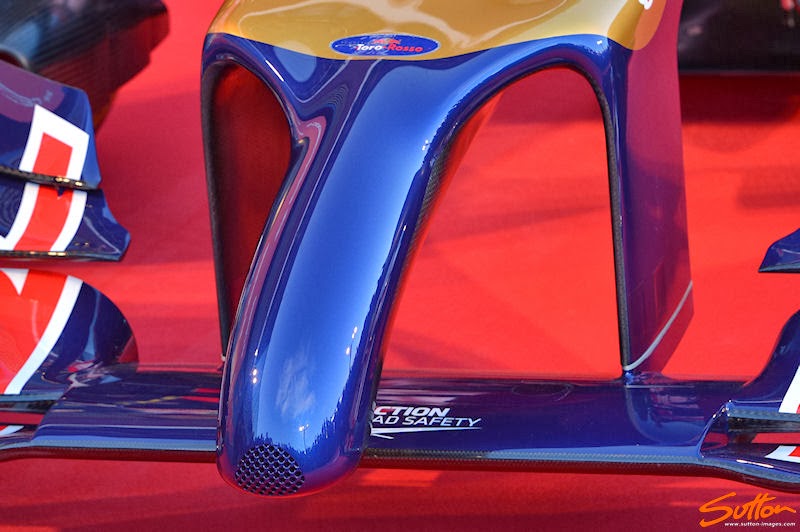