The 'Monkey Seat' or to term it by it's more official designation Y100 Winglet is often seen by fans as added when teams are looking for additional downforce. Although the winglet does often create a small amount of direct downforce it's not it's sole purpose when used by teams. The upper winged element of the winglet is used as a way of creating upwash, this in turn allows for a more aggressive Angle of Attack of the rear wing and therefore more downforce. Without the winglet the airflow being used by the rear wing would detach too early and lead to the wing becoming inefficient. Think of it as a way of joining up the airflow to make a more intense structure, whilst also increasing the feel and balance of the car (less chance of the airflow structures breaking down as the car brakes or turns).

The regulations governing that zone of bodywork have actually led to an increase in size of the winglet for 2014 with it's width previously restricted to 150mm (Y75 Winglet). The overall 50mm increase in width (25mm either side of the centreline) is predominantly due to the exhaust sizing and the regulations pertaining to it's diameter.  With other area's of the rear wing having been reduced in dimensional capacity the increase to this appendage comes as some solace, as it's primary objective is to aid the rest of the wing in generating flow structures. 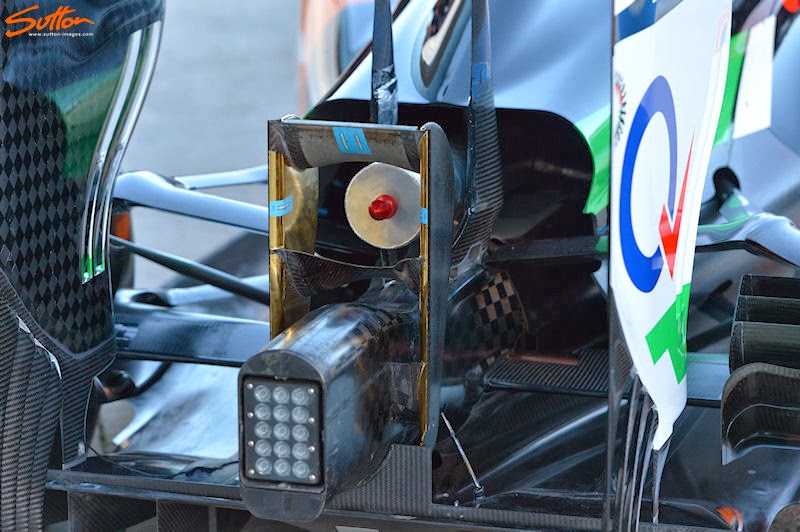 In the case of Force India we note that the team have decided to utilse the full 200mm width taking the winglet down to the floor of the VJM07 in an attempt to upwash the flow either side of the crash structure too. With the exhaust exiting just ahead of the winglet the team have chosen to place another winglet beneath it to influence the exhaust plume in an upward direction. Meanwhile to help mitigate the issues surrounding temperature the team have also placed gold leaf around the endplates of the winglet.