Having entered the sport in 2010 as Virgin Racing the teams Manor Motorsport DNA is still present within the teams makeup, even though the team has passed through several changes and now races under the Marussia moniker.  With promises of a 40m budget cap tossed aside the team from Banbury set about making a name for themselves in the sport irrespective. With undoubtedly the smallest budget on the grid and for 2013 the only car to use the Cosworth engine you'd have expected them to be at the back.  Utilizing KERS from Williams however the team made massive strides and on several occasions upset the Caterham apple cart.

Retaining both Max Chilton and Jules Bianchi for 2014 was probably motivated by connections and funding but is nevertheless a smart move anyway. It gives them much continuity something a minnow and frankly underfunded team require to make the step up to the midfield battle.  Their cause will of course be helped in 2014 as they forge a new alliance with Ferrari who'll supply them with their new powerunit (including ERS) and powertrain (8 speed gearbox) which although is more expensive option means the team wont be required to put in the level of development input they did to keep the Cosworth engine relatively competitive or the work to integrate their own suspension with the X-Trac gearbox.

Having lost the technical input of Pat Symonds to Williams will have come as a blow but they won't forget the lessons and planning/infrastructure he put in motion.  I look forward to seeing firstly how the MR03 looks and furthermore the development the team are able to chase in 2014. 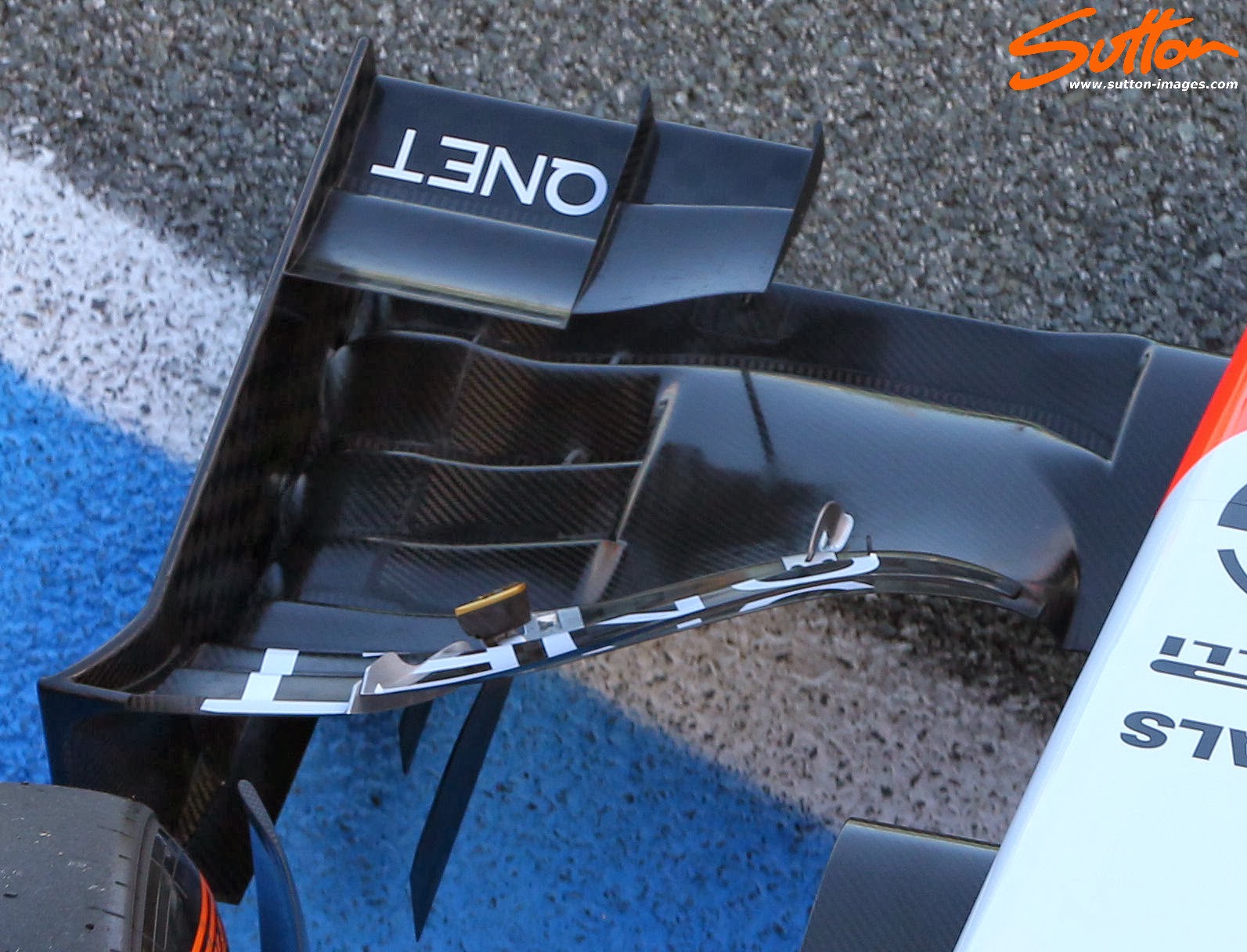 The component that see's and uses the airflow first, the front wing is an incredibly important part of the modern F1 car.  Development by the lead teams over the last few seasons has seen the proliferation of more and more layered/tiered wings and surprisingly Marussia arrived in Jerez with their own 7 tier arrangement.  The Wing may lack some of the refinement seen on the likes of the RB9 but I'm quite sure the team are happy with their aggressive direction.  The Mainplane is split into 2 main sections with the most forward section running the full length 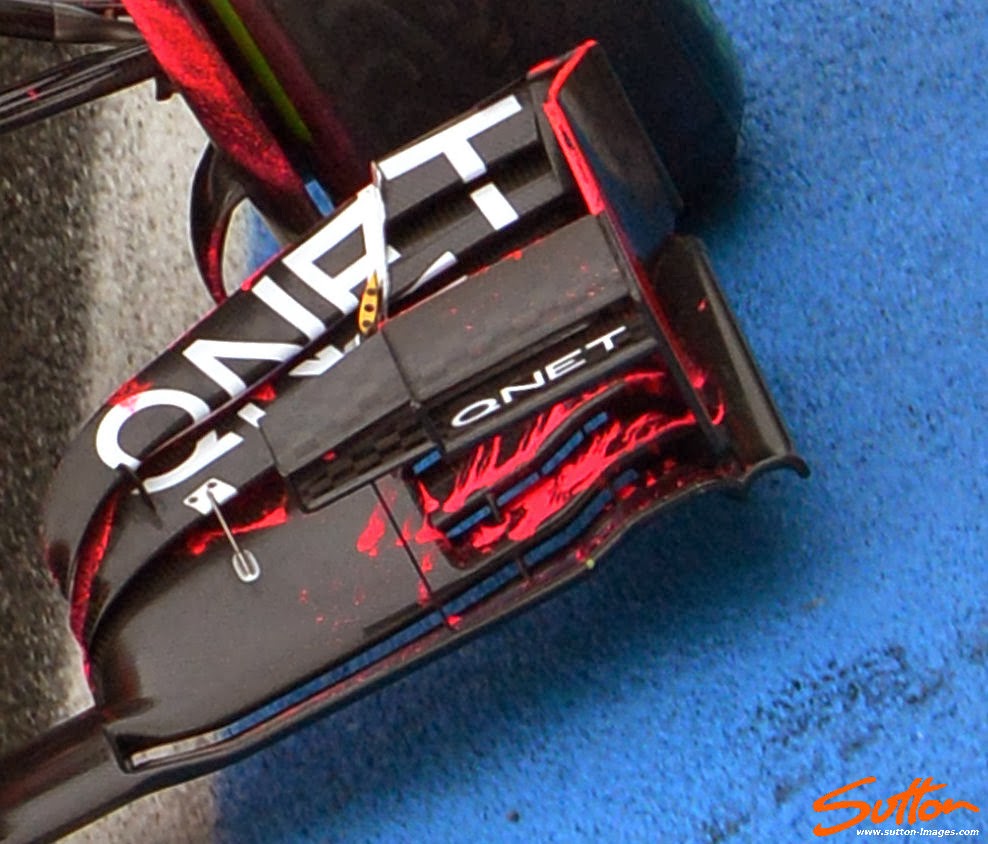 of the profile (Endplate to Y250), whilst the upper 3 tiers of the Mainplane are around 220mm wide.  Above this are 2 full length flaps, the upper flap is split into 2 further sections to complete the 7 tiers.  The Endplate is a fairly simple affair with an out turned section at the rear.  Holes have been placed at the base of the Endplate to coincide with the tiers that run alongside allowing airflow to move from the either side, helping the car in yaw.
The Cascades are basic when compared to their opposition (Especially with teams now concentrating on turning the airflow outward, with the loss of 75mm of width either side of the wing)  Both the main and smaller inner cascade have a low angle of attack. 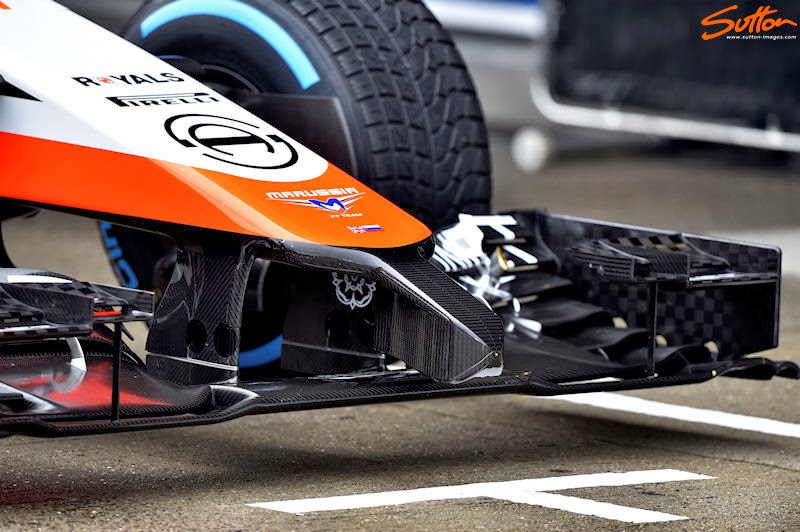 Marussia have taken the 'finger' nose direction with the MR03 but like Red Bull have adopted a 'Keel' solution too.  That is to say that although the nose meets the requirements set out by the regulations, it swiftly narrows beyond the 9000mm2 cross section, 50mm from the noses tip.  This further maximises the airflow under the nose, retaining much of what the 2013 counterpart would have enjoyed. 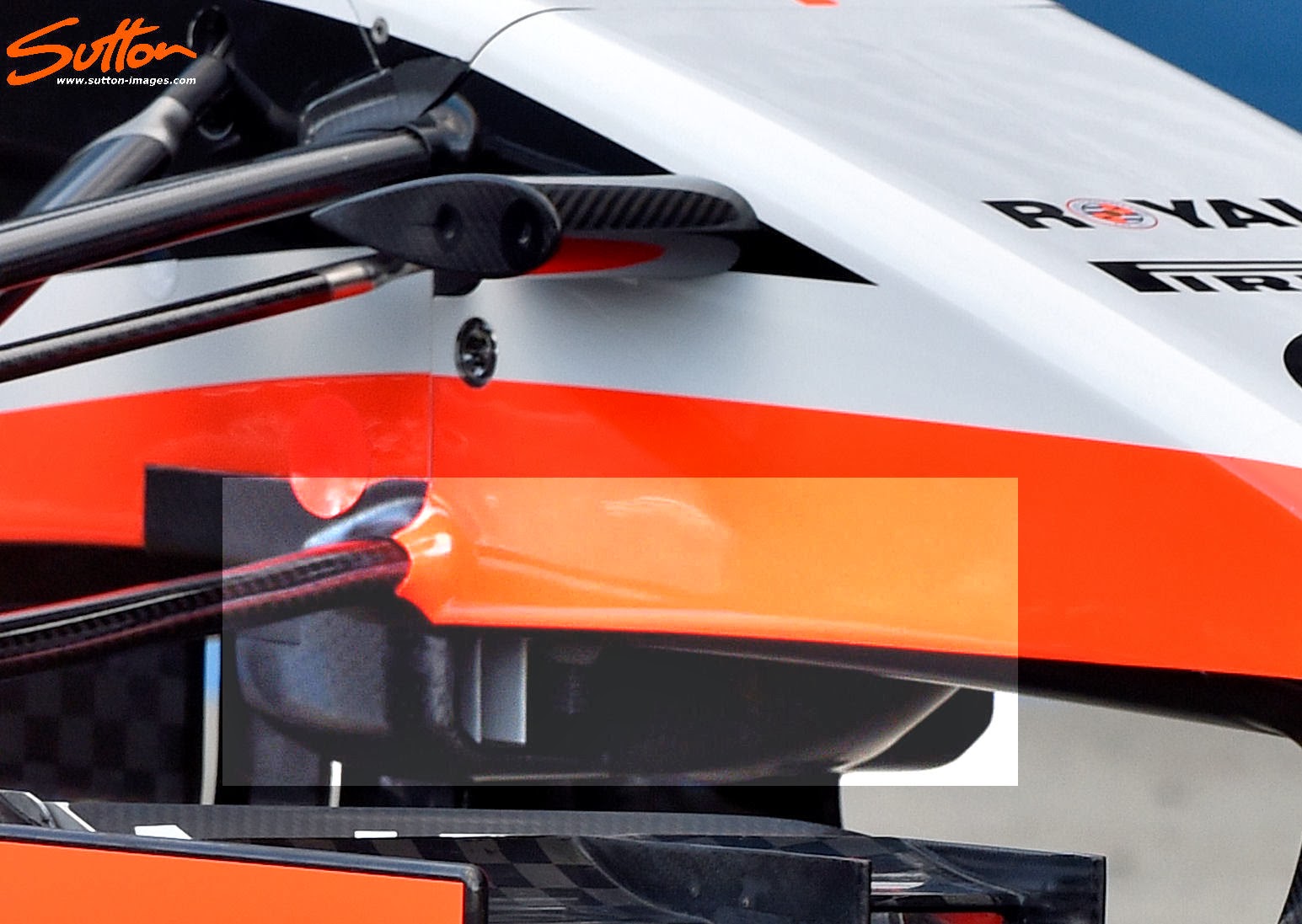 You may have noted that due to the very thin section
the team are missing the usual driver cooling aperture on the nose tip itself but the team have quite cleverly integrated this a little further down the car along with an air divider (small 'Pelican') underneath the chassis. (I've lightened that section of the image so you can see what I'm talking about)
The section appears to have been made so that it can be removed and different configurations placed/used instead.  Allowing the teams to utilse different driver cooling options based on the circuit conditions/requirements.  Behind this we find a set of curved multi tiered Turning Vanes. 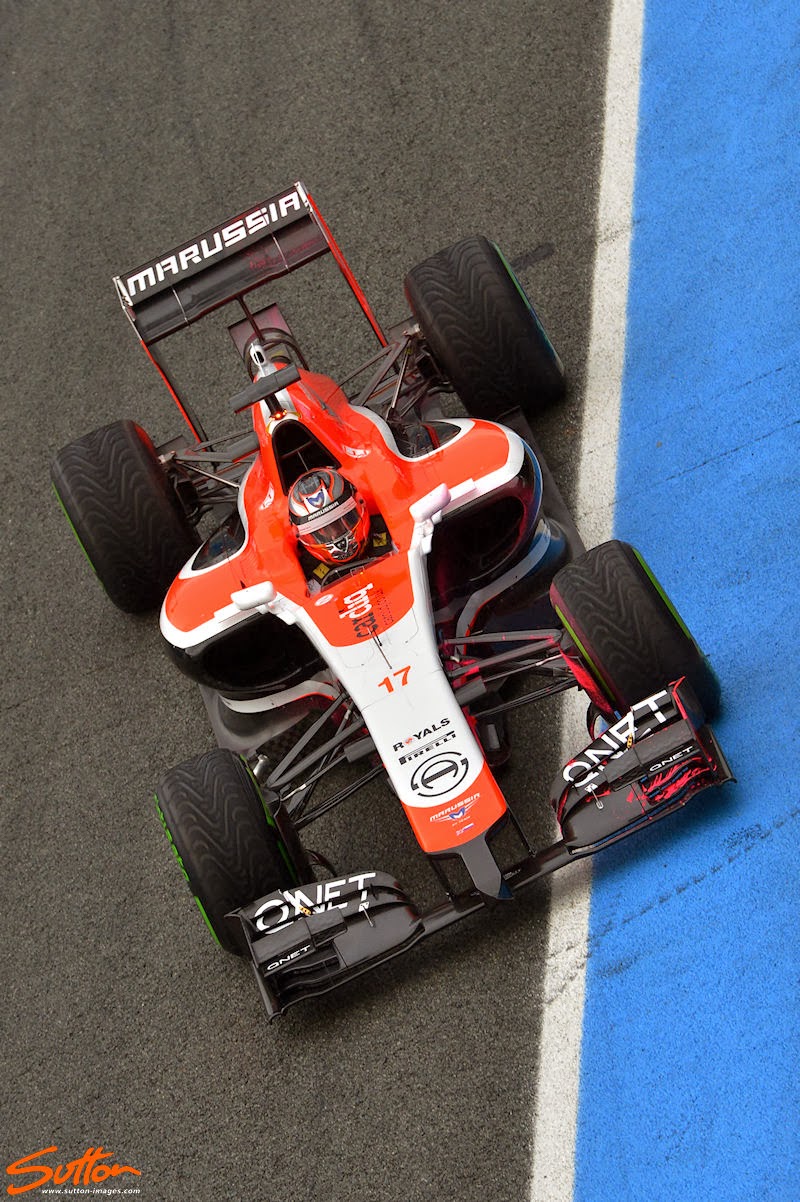 Understandbly for a team that is still looking to climb up the grid they have been sensible in terms of their packaging options.  The MR03 features substantially larger Sidepod inlets when compared to the F14T & C33 but we have to remember the much lower budget the team are working with.  The measure of a team these days is the resources at it's disposal of which the aforementioned have in spades compared to Marussia. Not being able to as accurately represent the internal flow structures needed to justify much tighter packaging the team have opted for their own interpretation.  The Airbox utlised by the team is split into 3 sections, dividing up the airflow to suit specific requirements that the powerunit demands.  It's shape is not too dissimilar to it's predecessor in terms of the upper chamber but the 2 lower chambers mean that the undercut is lost to the encasement of bodywork.
Like their Ferrari engined counterpart the team have also added 2 cooling Snorkel's either side of the Engine Cover's 'Mohican' in order to further assist in cooling the Powerunit.
In terms of the cooling the have chosen to exit some of the airflow from the Sidepods into the coke bottle region, just ahead of the suspension elements (See below) 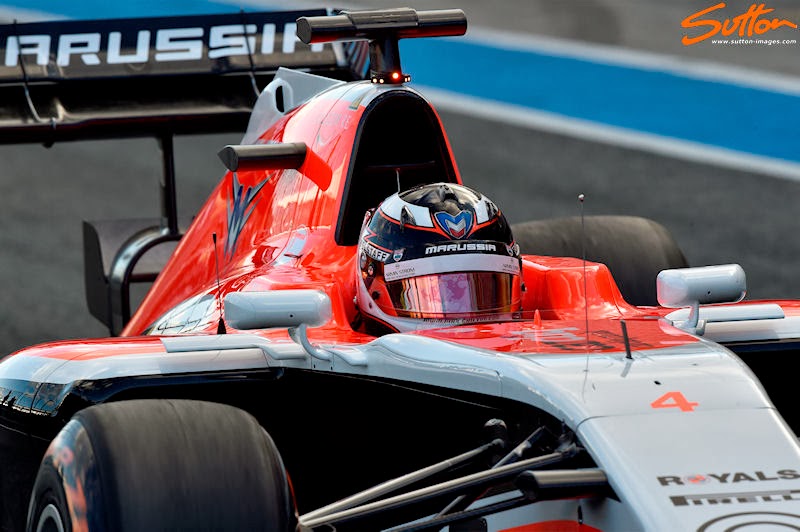 Added alongside the cockpit's edge we find 2 fins (1 either side of the wing mirror) and then just above the Sidepod a much longer horizontal blade fitted to the side of the cockpit, akin to the one used by Lotus early on in 2013 and subsequently used by Red Bull on the RB9.  The team have however decided (at least at this stage) not to run an Airflow Conditioner outboard of the Sidepod. 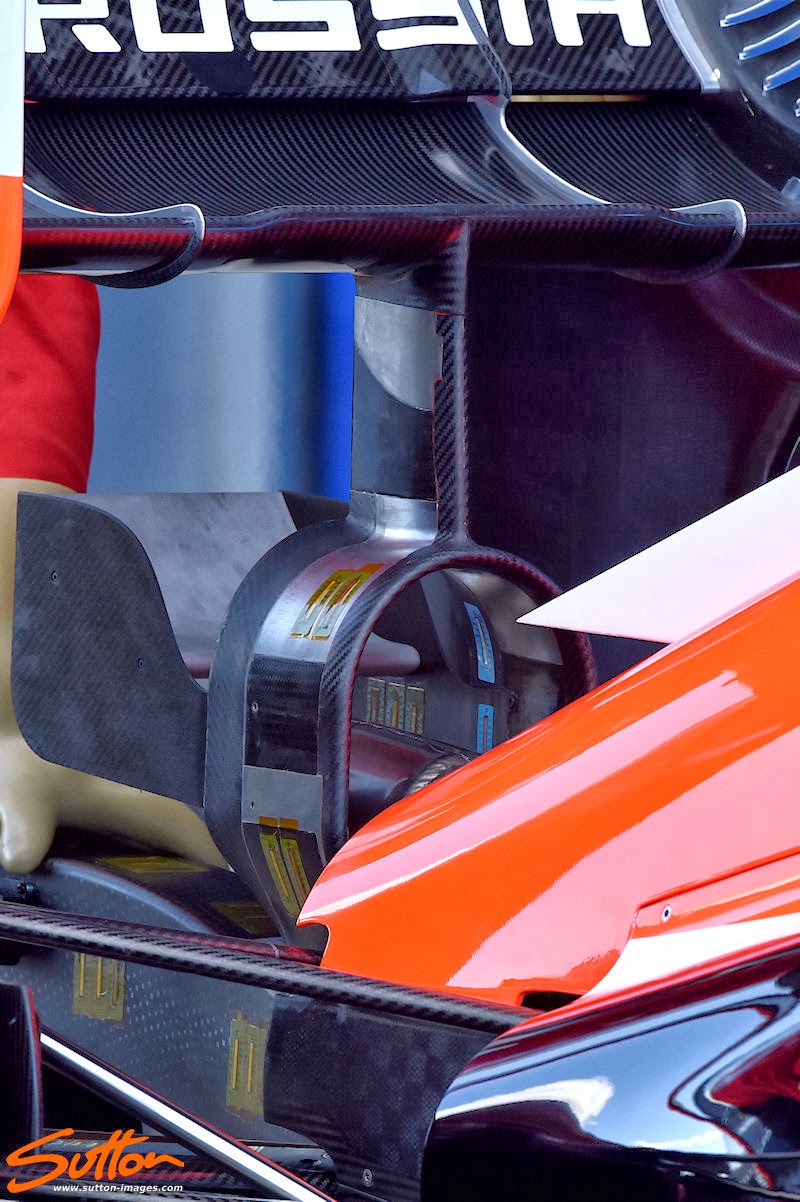 As we can see here, Marussia have opted to mount their Rear Wing in a similar fashion to McLaren with a Y-Lon (named very cleverly by Sam at Racecar Engineering) encapsulating the exhaust whilst giving up the necessary space for the mounting of a Y100 Winglet aft of it.  It's perhaps not as aerodynamically efficient as the McLaren yet as it isn't quite as low line and therefore taking advantage of the airflow passing over the bodywork ahead of it too. 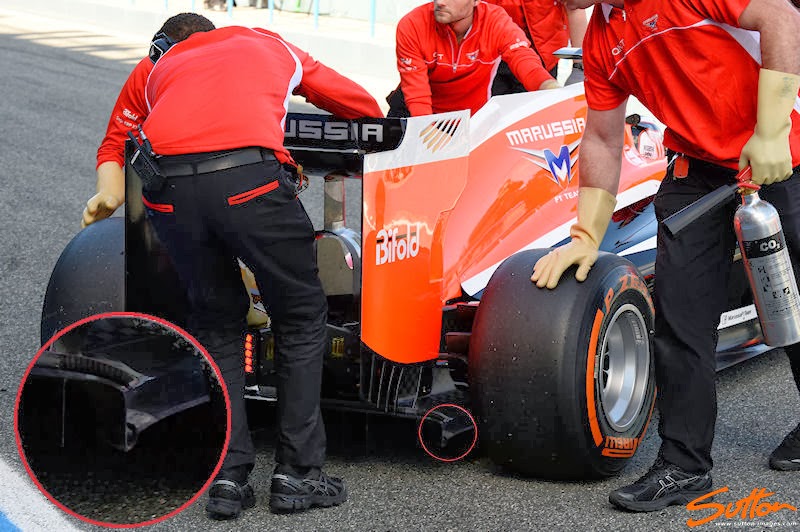 From here we can see that the team have retained their tyre wake slots at the leading edge of the rear wings endplates.  Furthermore if you look at the inset I've highlighted how the team have followed Red Bull's lead and added a Scroll to the Diffuser's outer periphery (used by Red Bull on the RB9).  This helps to focus the airflow that meets up on the Diffusers outskirt, vorticising the flow and increasing the outer diffuser channels Vortex.

Altogether I find the MR03 to be a well thought out concept with some nice touches, some further refinement throughout the season allied to their conservative cooling could see the team nab some points, IF we see a fair amount of none finishers ahead owing to powerunit failures etc.
Tagged
Newer Post Older Post