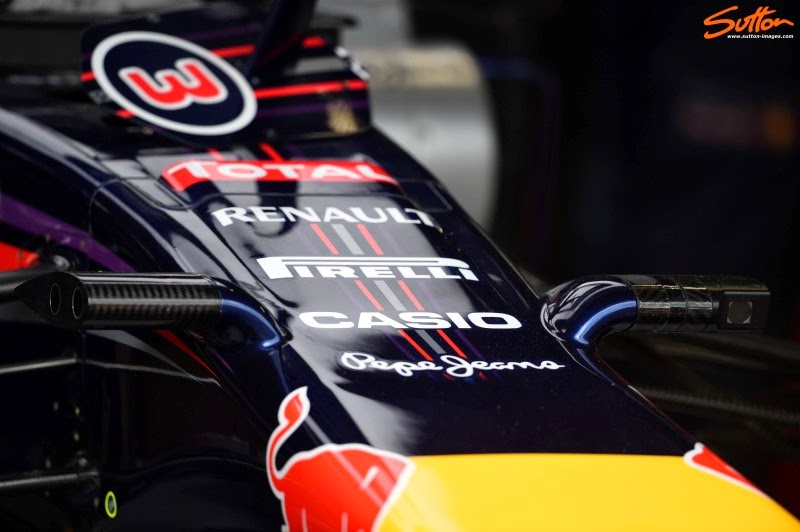 Even before the season had started questions had been raised over the 'missing' cameras that should be present on the nose of the car. When the team arrived in Melbourneit was clear they had a different interpretation of the regulations than everyone else, with a peephole cut into the noses vanity panel to conform with the placement of the forward camera.

A clarification from FOM/FIA has forced Red Bull to change the design of their nose/camera mountings, with the team adopting a similar 'handlebar' solution to Mercedes and Ferrari (above).  Red Bull had pushed the regulations for several reasons, namely because the wording was/is ambiguous and so opened the door for interpretation.  Not having the camera's placed on the side of the nosecone led to aero neutrality that simply cannot be had with them there.  Red Bull also realised that last season the FOM cameras gave away information they'd rather not be seen.  We had the Y250 vortex showing up on the rearward facing camera along with the flexing of the splitter stay I talked about at length during 2013 (below)

The hidden camera's used in the first 5 rounds on the RB10 didn't allow for any rear facing imagery to be caught, whilst the small peephole carved into the noses vanity panel didn't afford any great footage either.  The cynical tech analyst/writer in me would argue that per the regulations FOM agreed to the hidden arrangement, believing that Red Bull would once again run away with the title and so onboard footage wasn't a necessity. However with Red Bull left chasing the Mercedes boys that chase footage would be now welcomed and has led to a climb down on their behalf.

Red Bull's adoption of the 'handlebar' configuration is in all likelihood due to wanting to get the camera/camera mounts out of the way, mis-aligning them with the upper suspension elements, a tactic probably best employed by Mercedes, with Ferrari's placed within their path, dirtying the airflow further.