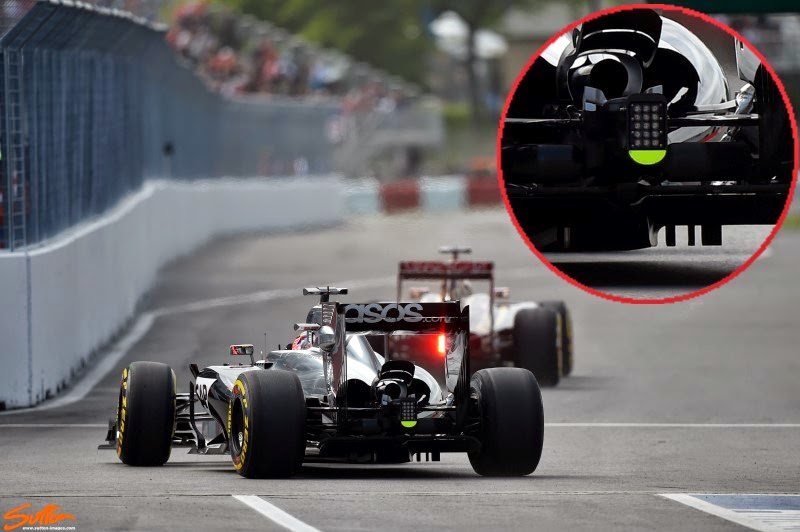 McLaren's season hasn't got off to the sort of start they would have liked and have once again made several intrinsic design decisions that have perhaps hindered their development curve.  One layout problem invariably leads to several others but one of their decisions which was supposed to boost performance was their 'wishbone wing' rear suspension.  Embodying the wishbones in much larger fairings looked to bridge the performance gap lost by the beam wing this season, however other items had to be designed around it too and so rather than just changing one items invariably you end up with a list of items.

Don't get me wrong it wasn't a bad idea but as other teams have shown there is still the opportunity to create downforce even without the beam wing or structures placed in a similar locale.  In order to place use the wishbone wings and give them as much freestream airflow as possible the team opted to place their cooling ducts higher up, either side of the exhaust outlet.  We have since found out that Mercedes HPP made a late call (just before pre-season testing) on the exhaust manifold to be used by the Mercedes powered teams, whilst both Force India and Williams have re-sculpted and changed rear end cooling options McLaren have not.

McLaren's design was clearly more reliant on the older specification exhaust with far more space now inside the sidepods, which will have a detrimental effect on the thermal/aero dynamics.  Making swift changes of this magnitude are not easy, especially as the layout of radiators etc also determine both airflow characteristics and bodywork shaping.

Moving back to Montreal and both drivers tried their MP4-29 with no upper 'wishbone wings' during Free Practice (See main image above) in order to try and reduce some of the drag induced by the components.  However the team returned to the usual configuration for qualifying and the race most likely owing to a better performing car/strategy for the race.
Tagged
Newer Post Older Post