Time for reflection... The Rosberg/Hamilton incident The Belgian GP has proven to be the tipping point in what had already become a fractious relationship between Lewis Hamilton and Nico Rosberg.  The problems are many but a feud on this level only heightens when both drivers, drive for the same team.  Mercedes dominance has been clear to see all year, with us having to go back to 2004 (Ferrari) and 1988 (McLaren) to see one team with such a clear advantage over their rivals.  Ferrari had their drivers (or should I say Rubens) under control in 2004 but like Mercedes, McLaren saw the egotistical scales tilting in 1988.

I don't need to write about the tumultuous relationship between Senna and Prost as the story has been told over and over, from different perspectives.  However what I will say on that matter is that Prost was always villainized, something that irks me and perhaps always will.  Prost was a thinker, a planner, a strategist but came across as more outwardly reserved, whilst Senna cut from a similar cloth had a fierce personality.  Senna's never die attitude is what endeared him to his followers and even made those that cheered for others, respect what seemed like an ability to out drive the machinery he was in.

Does any of that sound familiar? I see echoes of the Senna/Prost rivalry emerging in Hamilton/Rosberg as both vigorously tries to best the other as the Championship comes to a climax.  The media (especially the British) has not made things any easier creating a hyperbole around the pair as they both look to take the drivers championship, creating friction that Mercedes management seem ill equipped to deal with.  Like Ron Dennis and McLaren in 88, Toto Wolff & Niki Lauda have emphasized throughout that both drivers are on equal footing and are allowed to race.  Unlikely to lose the constructors title to Red Bull now, with an almost unassailable lead they could just let the pair have at it.  However I'm sure the Daimler board of directors won't be impressed with their drivers feuding, all the time leaving the door open for Daniel Ricciardo to ghost in behind and take the drivers title.

So what of the incident in Spa?  Post race, like many others I took to twitter and as always I tried to see the argument from both sides of the fence, afterall this was a racing incident, not investigated by the race stewards.

Of course this came across as a defence of Rosberg, much to the annoyance of the Hamilton fans, although this was not my intention.  The move was never on for Rosberg, I simply believed at the time that Rosberg was showing Hamilton "I'm here and you're going to have a battle on your hands".  Toto Wolff's reaction in an interview with the BBC post race was that the move was "absolutely unacceptable, absolutely unacceptable, lap number 2 of a long race, a crash between two team mates"

The problem with the incident, is what ensued for Hamilton, the instant deflation of the tyre handing Rosberg the lead of the race, with Hamiltons stricken W05 taking what would usually take just over a minute to get back to the pitlane, taking double that and of course all the time the delaminating tyre causing irrecoverable damage to his cars floor.  This more than anything is what people are unhappy with as even with a damaged front wing Rosberg was able to continue at a relatively decent race pace, whilst Hamilton's race was destroyed and his championship chances once again eroded.

If we were to rewind to lap one and look as Hamilton and Vettel diced for position in a similar way, Vettel (although he was actually further alongside Hamilton coming toward Les Combes, along Kemmel straight) abandoned his attempt to overtake, taking to the run off instead). 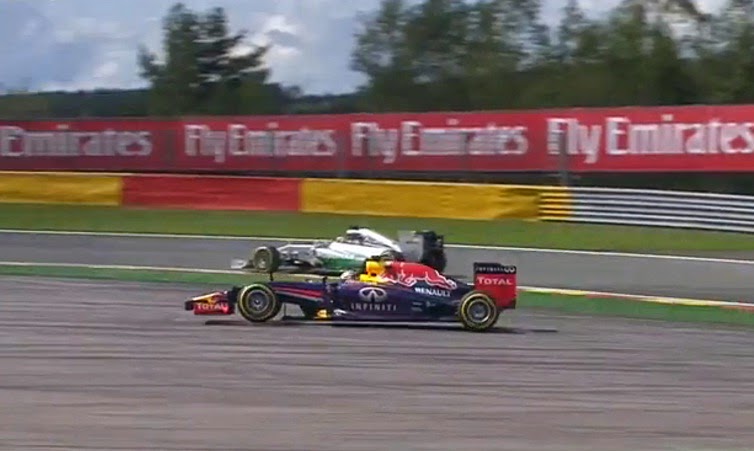 So does that make Rosberg's move wrong? Well lets also cast our mind back to Germany, when Hamilton was trying to get back through the pack and came up against Jenson Button at the hairpin.  Hamilton conducted an overtake in the same vein as Rosberg, where a collision ensued.  The result was a similar Front Wing breakage on Lewis' car but as the speed was much lower in this incident Button wasn't penalised with a puncture.  Yes I realise these are different incidents but in terms of racing incidents they both carry the same merits.  Just like the Rosberg / Hamilton scenario initially both blamed one another, Jenson later said he understood why Hamilton thought I was giving him the space to pass, but came short of actually admitting fault in any way (A racing incident.

Moving onto the post race debrief which has now sparked the insinuation that Rosberg intentionally drove into Hamilton.  As always this started out as a one sided argument with Hamilton telling the media that Rosberg had admitted driving into him.  As always though context is important, with Toto Wolff coming to Rosbergs defence:

"Nico felt he needed to hold his line,", "He needed to make a point. He didn't give in. He thought it was for Lewis to leave him space and that Lewis didn't leave him space. "For Lewis, it was clearly not him who needed to be aware of Nico.
"So they agreed to disagree in a very heated discussion among ourselves, but it wasn't deliberately crashing. That is nonsense."

Rosberg is clearly towing the line that he rolled the car into the gap, hoping that Hamilton would allow him the room to retain his momentum, which in his eyes would have allowed both of them to continue their fight.  Hamilton however didn't have to leave him that space, he had the position and was entitled to put his car in that position.  Thus making it six of one, half a dozen of the other: Racing incident.

Did Rosberg intentionally crash into Hamilton? Only 1 person truly knows the answer to that...  What is clear is that the incident is the tipping point in the Championship and more importantly a major issue for Mercedes to deal with going forward.  As we have seen in the case of Red Bull / Vettel / Webber / Horner / Marko, team orders are not always a resolution to such incidents, with a toxic relationship between all the parties created, with each beginning to believe the other is 'taking sides'.  Turkey 2010 created much the same ripples for Red Bull as we are going to see going forward at Mercedes if things aren't controlled.