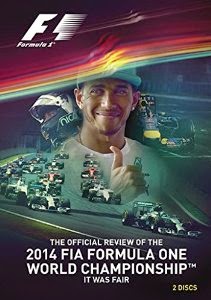 Duke video who produce the official DVD/Blu-Ray review each season were kind enough to send me a review copy, it's been rattling around on my desk for the last week or so but I finally got chance to cast my eyes over it.  The last one of these reviews I cast my eye over was the 2009 season, which saw Jenson Button clinch his first drivers title at the helm of the BGP001.

The format remains largely untouched with two DVDs home to over 4 hours of footage, the first a run through of the races includes commentary from BBC regular Ben Edwards, whilst the second offers onboard footage, complete with narration from the drivers and some tech tid bits from Gary Anderson.

The inclusion of James Allen and Jennie Gow in segments of the season review (Gary Anderson also pops up from time to time) brings a much welcomed change of pace, as otherwise it may all come across a little metronomic, although I must admit to having watched the extensive footage over several sittings.  The uniformity, driven by the need to split the review into race sections does sometimes lead to a loss of outside narrative/perspective but that's to be expected, especially as I've mentioned most people will have to take several bites at the cherry to complete the disc(s).

As anyone that follows my work will know 2014 provided the backdrop for the most extensive technical shakeup the sport has ever seen, at points the review looks to provide information on these changes and infringements that happen throughout the season, that's all it does do though, cover the bases for the average F1 fan. (Don't get me wrong you have to appeal to a wide audience and so it's clear why they chose to do that)

One thing that has always stood out to me is the naming of these reviews, in this case "It was fair" in reference to the battle between Hamilton and Rosberg, whilst previous titles "Not in a hurry" (2009) and "Luck does not come into it" (2008) always seem a little backhanded in their compliments to the title winner, that being said it does sum them up quite neatly.

As broadcasters (especially in UK) look to one up each other each race weekend there becomes less and less unseen footage and team radio for DUKE to present on their review, however there is still plenty there that you won't have seen or heard before, making it a great addition to any F1 fans collection.

Duke have been kind enough to offer up a copy of the review as a prize too, so if you fancy bagging a copy for your collection simply head over to twitter and tweet me @SomersF1 with answer to the following: