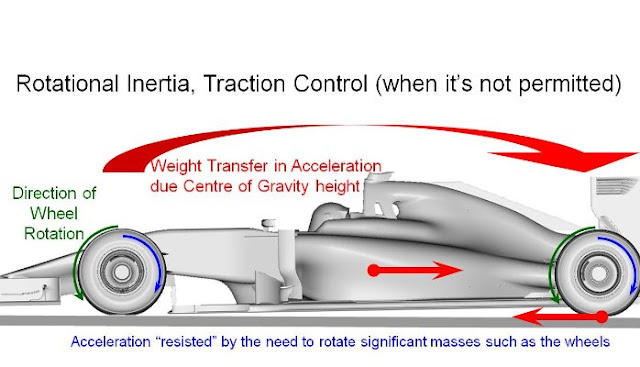 Rotational inertia should really be part of the discussion about weight.  For engineers this is something that will be very familiar as a concept, but I’ve always felt that it isn’t really intuitive to use maths taught at university to “feel” how important it is.   I converted the impact of inertia into a revised effective weight of the vehicle for the purposes of acceleration.   For a Formula 1 car you are likely to be talking of well over 10% of the effective weight of the car which has been added due to the need to accelerate the car's rotating masses.

A good engineer always does some reality checks.  So, if you forgot about rotational inertia, you’d quickly see from the calculated vs. measured acceleration of any car that it gathers momentum more slowly than the power and the weight would suggest it should.  Everything that rotates must be accelerated both in the direction that you’re trying to go, but also in rotation.  For most of the car this is pretty much a constant (wheels, brake disks, driveshafts, differential etc.).  The rotating mass really does act like having a heavier car because, if you roll off the gas and allow the car to coast down, it also behaves like a heavier car.  Rotational inertia works like linear inertia.

Now, engine rotation (and part of the gearbox) is a bit different here.  The effect of engine rotation changes when you change gear.  In 1st gear the engine has to accelerate to high RPM over a small speed range so its rotational inertia has a greater impact than in top gear.  This rotational inertia can be used to your advantage when changing gear (e.g. 2nd to 3rd) if your gear change is fast and the car can handle the “impact” of suddenly slowing the engine rpm down to that which matches car speed in the higher gear.  Be careful with reliability!  When you are wheelspin limited, the power can help you overcome drivetrain inertia, but undriven wheels still slow acceleration.

Back in 1985, I was trying to introduce lap time simulation to the F1 team for which I was working.  When I asked the engineers what the inertia values were for various parts of the car, they had that blank look that tells you someone hasn’t really understood what you’re talking about.   Unfortunately, even when I explained what I wanted the information for, it quickly became clear that this sort of engineering information wasn’t available.  I had to reverse engineer the information for myself (we didn’t use computer aided design then).

For reasons such as saving costs and limiting the use of exotic materials (which are unlikely to find their way into road cars), the rules force F1 engine builders to make relatively heavy engines (compared to what is possible).  Don’t get me wrong – they are light compared to road car engines generally speaking.   In fact just fitting a functioning rev limiter to protect the engine from over revving was a challenge on certain F1 engines in the past (we had less knowledge but more freedom then).  Simple (crude) rev limiting devices cut the spark to an increasing number of cylinders over as narrow a rev range as is practical until the RPM levels fall below a critical level.  With the lightest of engines one piston firing at higher rpm when the engine was unloaded was enough to send the engine significantly into the red.  Thus, engineers invented tools to limit the rate of acceleration of the engine.  This engine protection was accepted by rule makers, and used in racing.  Effectively ignition timing and spark cutting etc were used so that the engine behaved like a heavier unit, initially, for when it was disconnected from the weight of the car (e.g. in neutral).

So naturally the drivers of the time (1990’s and I’m not going to say exactly when!), would complain like hell that they needed “it” more in 2nd or 3rd gear than in 1st.   Enter the next part of having traction control when, in theory, you could not have it.

To explain I need to give some background.   Back in the 1980’s, when working on a “Group C” Le Mans 24 hour car, we had a problem one year with a big misfire, late on in the race.   We wasted some time changing the electronics / cables / spark plugs etc.  Regrettably though the actual problem was that we’d burnt holes into some pistons.  So why did this happen?  Back then, we had a mechanical fuel injection system.   Very simple in concept – you had a fixed volume of fuel that would be injected into the engine each power cycle (two revolutions) which changed with a cam that would modify that volume based on throttle position and some very small changes with RPM.  Mapping in the more modern sense wasn’t really possible.   During the race we had increasing atmospheric pressure (a high pressure region was coming in) combined with a crystal clear night (so the temperature dropped like a stone).  Together these things conspired to increase air density and the engine, with its “fixed” fuel flow was running too lean.
Carburettors, by the way, can cope with this better than early mechanical fuel injection systems if badly set up, as this one turned out to be.   This need to cope with extreme air density changes is a well understood problem for road cars.  They have to operate at sea level and at high altitude as well as in all combinations of hot and cold conditions.    F1 engines also need to be able to correct (fuel, ignition) for ambient conditions.   Today a “lambda” sensor is used with electronic fuel injections systems to measure the richness of the fuel air mixture after it is burnt.

Even with a mechanical system, to prevent this from happening you really just need to find a way to tweak the map based on measurements of temperature and pressure of the air going into the engine (air density).   Ideally you’d want to measure humidity and fuel temperature as well.  So engines were permitted to sense atmospheric pressure and hence you had all you needed to modify the limit rate of acceleration of the engine in any gear.   But how?   Well the atmospheric pressure sensor had to measure the pressure inside the airbox, because that is the air the engine is swallowing.  The airbox is carefully designed by people like me to take full advantage of the forward velocity of the car to ram as much air in there as possible.   This means we were increasing the air density.  We weren’t allowed any sort of sensor that would tell the engine control unit (ECU) what gear the car was in.  However, with some track testing, one could use the way pressure changed with speed in the airbox to determine that, if the pressure was "X" above the ambient level seen at the start of the race, then the car was likely to be in a certain gear.   To refine that process you just needed to know the RPM (another purely engine parameter).  Hey presto traction control.
Now, the rule makers knew that the teams would be experimenting to find ways around the technical rules and they employed experts to keep an eye on the software used by the teams.  You can imagine that one man, keeping an eye on dozens, was a challenge.  It wasn’t until the rule makers imposed standard ECU hardware and software on the teams, that the games the teams were playing stopped.  Perhaps we need something similar for more ordinary road cars in the longer term.  :-)
There are many ways of getting a feeling for the power of rotational inertia.   Quickest way to have a look is perhaps to check out some videos that are out there already.   For example :- www.youtube.com/watch?v=NeXIV-wMVUk or www.youtube.com/watch?v=CHQOctEvtTY