Refueling, why it might not be such a bad idea...

A picture paints a thousand words, at least that's what they tell me.  What happens when all things aren't equal though?  The Formula One rule books contains a myriad of self deprecating paragraphs that serve the purpose of bamboozling anyone that dare get lost in them.  I've lost many a day arguing with myself over how one paragraph defeats another, mostly because as Bernie recently and so eloquently stated: "They're like a Victorian house that you keep adding bits and bobs onto, rather than just tear it down and start again".

When the FIA announced their intention to "revolutionize" the sport in 2017 one of the most controversial statements was they intended to reintroduce refueling.  It was thought the plans were off the table, however, in a story run by Autosport today it appears Jean Todt is keen to re-evaluate the idea (what I'd give to be in that meeting in Geneva for those 2 days next week by the way..).

Twitter, I use as an example as it gives immediacy, was awash with comments condemning the move when it was originally announced, swiftly followed by the passing around of the image at the top of this page.  Out of context we can see that between its arrival in 1994 and its exit in 2009 the sport saw the least amount of overtaking, whilst in stark contrast the last 5 years has seen the most.  Are we thankful for that? No, the public demand closer racing and more overtakes.

One of the biggest issues with lots of overtaking is that it all suddenly seems a little too easy, with many pointing to DRS as one of the sports failings.  I wholeheartedly agree that DRS is no longer what we signed up for, marginalised in favour of ease of process by the FIA and teams.  No longer do we see teams and drivers testing different wing setups in practice to determine which will give them a boost over their rivals.  Nor do we see the FIA make changes to the length of the zones as they did in the early days, something that helped to mix up the challenge.  Meanwhile, the who has the biggest balls or free use of DRS during qualifying was also shown the door, making for a metronomic approach to qualifying, rather than the edge of the seat lap we should be seeing.

Whilst I understand that the 2017 regulations have been watered down considerably, at least the rear wing design will change slightly.  Perhaps with this the FIA should reconsider how DRS is employed, as the moves that shouldn't be on the cards, like Daniel Ricciardo's in 2014 or Max Verstappen's in 2015 are the ones we wanna see..

The problem with refueling is strategy, which inevitably leads to drivers swapping positions in the pitlane rather than on track.  I like a bit of strategy, for me it adds to the excitement but, I know it's not for everyone and likewise I do still want to see the drivers go wheel-to-wheel.  A return to refueling needs to coincide with a loss of data to the teams if it is going to scupper their thirst for controlling everything from the pitwall.  GPS is one of the tools I'd remove from their arsenal, as this will water down their ability to make decisions, we only have to look at the mistake that Mercedes made in Monaco last year under similar circumstances.


Sure, they'll find other ways, as they always do but, in the meantime we may see some plenty of errors of judgement and some good racing too.

Why now? Why the change of heart?

When the FIA announced their intention to improve the speed of Formula One in 2017 they predicted an improvement of 5 seconds per lap.  News has recently emerged that Pirelli have requested the plans to improve downforce be pegged back, owing to their concerns over building a tyre that can cope with the increased downforce and still degrade, allowing for 2-3 stops without stipulating tyre pressures around double what is currently used.  As such, the aerodynamic overhaul was to be limited to just a change in front and rear wing dimensions, countering the additional width presented by the tyres and marginalising the drag penalty that would have ensued.

Bringing refueling back to the table swallows up several of the issues currently faced by the FIA, Strategy Group, Technical Working Group, engine manufacturers and Pirelli.  Weight is a major issue for the current bread of cars, as I've discussed on numerous occasions.  Perhaps the best example: http://www.somersf1.co.uk/2015/06/lift-coast-whats-big-brouhaha.html

That means that the cars are dragging around an additional 10kg's of fuel at the start of a GP, with 10kg normally good for around 3 tenths in lap time.  Get to the end of the race and the cars will be edging toward 60kg's heavier, which should make them around 2 seconds a lap slower than their predecessors.

As we can see, weight is laptime.  Reducing the amount of fuel onboard will immediately improve the performance window of the cars and reduce the impact on the tyres too.  If, as a driver, you're no longer having to worry about the fuel weight, you no longer have a concern over your tyres either.  As such, we would see drivers pushing their cars.  Of course you'll have those that try and hang it out another few laps but if the FIA are clever with their specified tank size / weight that can be carried they can make certain of at least how many stops a race would be. 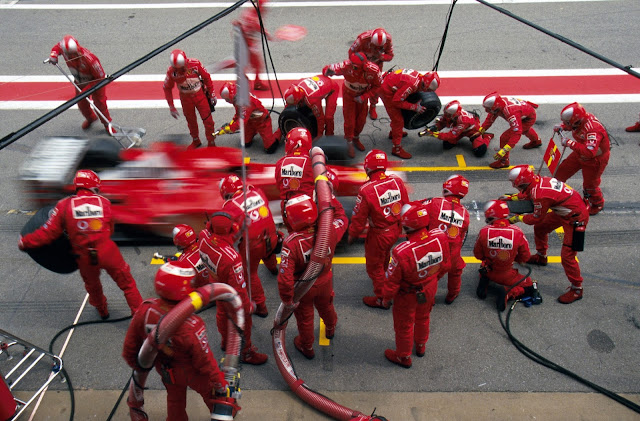 Whilst we're talking about pit stops lets deal with the process and issue of personnel, especially if refueling is going to make a comeback.  Don't get me wrong 2 second pit stops are fantastic but blink and you'll miss them.  It should be part of the spectacle of Grand Prix racing and as such I think we need to slow them down, make them visible.  Refueling would slow them down, no doubt but I'd assert that refueling the car should be done separately to the tyre changes, whilst all of this must be done with less personnel around the car, much the same way we see in other top line motorsports.

I know my views will polarise opinion but as you can see they are built on solid foundations, irrespective of that I invite your opinions too, drop them in the comments below.