A source close to the team has been keeping me abreast of the ownership situation of late and it appears that the team will be changing hands once again. 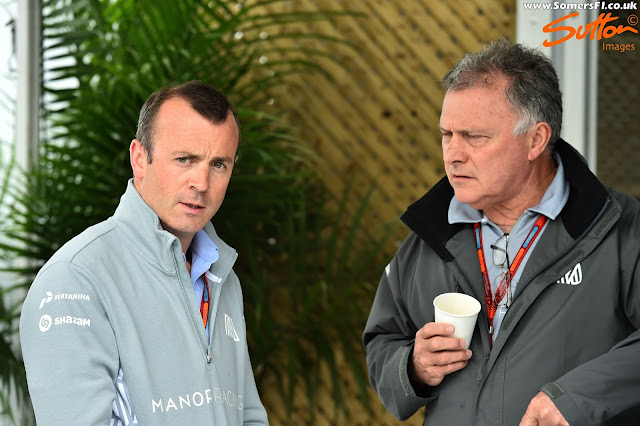 The team, who are the sole survivor of the new entrants in 2010, has seen many guises down the years but has always had the Manor name associated with it throughout.  The latest iteration of the team was a real Lazarus operation, with a last gasp purchase made by Stephen Fitzpatrick saving the team from administration.  However, whilst performance at the track has been relatively good this season the financial forecast has remained rather gloomy, especially given the withdrawal of Rio Haryanto mid season as it's understood that the drivers sponsors didn't fulfil their obligations.

The rumour that has been circulating the paddock is that Tavo Hellmund (yes, that's right you've heard the name before, as he helped mastermind F1's return to the States and Mexico) was behind a bid to purchase the team.   Whilst it's still plausible he'll be involved it turns out he may have been more of an intermediary, as a consortium with ties to the Asian market and several GP2 drivers seem to be the ones who are actually behind the purchase, that is understood to have been concluded yesterday at their base of operations in Banbury.

Fitzpatrick had initially hoped to cling onto the team even if he had to accept that someone else would come in as a majority shareholder, however, it is my understanding that the consortium have offered him a clean break, taking over the team in its entirety and repaying an internal loan that he funded.  The news of this purchase will be welcomed by the teams staff as it was understood that Fitzpatrick had put the team on borrowed time, unable to keep writing cheques from his own personal fortune, which as the adage goes - How do you make a small fortune from Formula One? start with a large one.  As such, several suppliers had already been made aware of the situation and were expecting the team be put into administration, should a deal not be done within the next few weeks.

The financial stimulus of finishing tenth in the constructors championship slipped through Manor's fingers in Brazil and will be a bitter pill to swallow but is not a concern of the consortium purchasing the team, who'd made their plans without the stipend in mind.   What is difficult to ascertain at the moment is how this will affect the momentum of the team, escpacially given the dramatic change to the regulations next season.  Stability within the technical staff and framework could be key to their success, with F1 stalwarts like Dave Ryan, Pat Fry and Nicolas Tomazis now part of the structure.

The migration of drivers is another puzzle that will need to be fixed, as it appears that Mercedes are looking to distance themselves from the team, placing Ocon at Force India and looking for a seat elsewhere for Wehrlein.  This in itself is no big issue but it's likely that Mercedes wrote a large percentage if not all of the costs to supply their powerunits to the team in exchange for those seats.  Williams also have a vested interest in some respects, as they supply Manor with their gearbox and suspension and whilst it's not the kind of money you'd expect to be paid to Mercedes HPP it is still a significant financial deal.  The driver lineup for 2017 will, as always, centre around who can bring the budget and whether they have the super license credentials but I think it's fair to say that we can expect at least one returning name from the last few seasons with a fresh face in the other seat.

The last piece of the puzzle is where Graeme Lowdon fits into the jigsaw, as the teams previous President and Sporting Director was front and centre at the sign over yesterday.  He certainly has the credentials to lead the team once more but may offer the consortium no more than a foot in the door.
Tagged
Newer Post Older Post