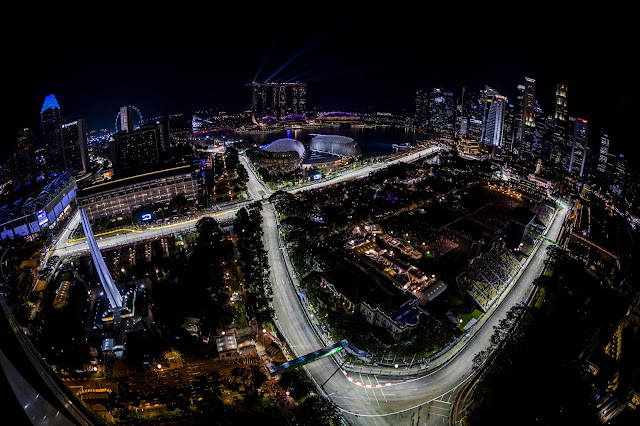 A race that was supposed to swing the title in Vettel’s favour couldn’t have turned out any worse for the German, as his title rival swooped in to claim a Grand Prix victory that didn't look remotely on throughout the weekend.

Most of the time It’s hard to say what goes on in the mind of an F1 driver, such is their hyper focus on the job at hand. However, it’s easy to be reminded that whilst we often consider them to be robots sent from the future, they too make mistakes in the heat of the moment. Their ability to process information and react to it within milliseconds is what sets them apart from the average jo(e) that thinks he or she could do from the comfort of his or her sofa.


The tension was palpable at the start of the race given it was the first time that any session, let alone a race, had been run in the wet at Marina Bay. A voyage into the unknown then, no data, no reference points just experience and wits - no pressure then.


Adding to the suspense was the fact that there was a split decision in terms of tyres to be used within the field, the top six - Vettel, Verstappen, Raikkonen, Hamilton, Bottas all opting for the intermediate tyres, whereas Hulkenberg, Alonso, Vandoorne in 7th to 9th went for the wet tyre. Meanwhile, the spread was just the same further down the field as Sainz (10th), Kvyat (13th), Grosjean (15th), Stroll (18th) all ran the intermediate, whilst Palmer (11th), Perez (12th), Ocon (14th), Magnussen (16th), Massa (17th), Wehrlein (19th) and Ericsson all started on the full wet tyre.


It became clear pretty early on, sans first corner accident, that the difference between the inter and wet tyre, at least in the early stages, was minimal. A strange occurrence given the supposed ability of the wet tyre to clear more water than its lesser trod brother but mirrored the events of qualifying at Monza.

I’m sure you’re sick of seeing or hearing about it but we can’t really pedal on any further without covering it here. The collision that took out the top three contenders and unceremoniously lifted Fernando Alonso into the air was a racing incident - six of one, half a dozen of the other as all three tried to occupy the same space before they even reached the first corner.

VER took #Kimi7 out and then he went to #Seb5 #SingaporeGP
— Scuderia Ferrari (@ScuderiaFerrari) September 17, 2017

The Ferrari twitter handler, clearly aggrieved with the loss of both drivers decided to blame Verstappen for his role in events but might have done well to have watch the clash more than once or from various angles. The faster starting Ferrari’s pincered Verstappen, as the Dutchman cleary stayed true from his starting position, aside from some opposite lock to correct the greasy getaway. I’ve also heard from aggrieved Ferrari fans about how the Red Bull driver should have jumped on the brakes. It’s likely that they’re the same people who misquote the great Ayrton Senna, so I’ll use that against you


Having said that, despite protestations otherwise, I’d argue once he saw the Ferrari pair beside him he did his level best to avoid them, backing out of the throttle. Conversely, had he not backed out his left front wheel might not have collided with the right rear of Raikkonen’s.. que sera, sera.


The interesting element of the accident comes from Vettel’s side, as had he not used his tried and tested start tactic of crossing half the track to crowd a competitor he might have avoided any potential collision altogether. It’s a moment that reminds me of a scene from the Matrix, you know the one, with the Oracle, where she tell’s Neo not to worry about the vase, only for her action to cause him to knock it over.


“Ohhh, what's really going to bake your noodle later on is, would you still have broken it if I hadn't said anything?...”


That’s the thing, even with foresight of the incident and given clashes between these drivers before it still wasn’t enough to dissuade any of them from getting involved in what was always going to amount to a tussle...


Mirror, mirror on the wall… 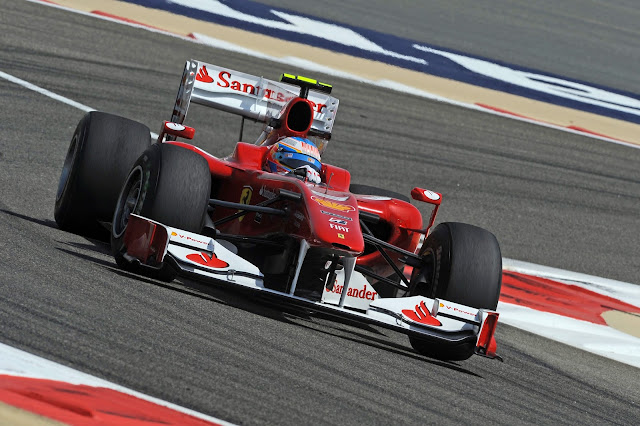 I’ll just douse this fire with one last can of petrol and make another suggestion before I move on -  mirrors. In 2010 the FIA regulated the position of the mirrors to an inboard location, as teams had for aerodynamic reasons moved the mirrors outboard, placing them on top of airflow conditioners and the like (see Ferrari’s F10, above). As the cars have been widened from 1800mm to 2000mm this year I’d argue that the placement of the mirrors should be a consideration of the regulator, especially as aero still trumps visibility in their placement. Again it might not have been a factor that helped in this scenario but certainly one I’d be interested in knowing if it was.


I’ve recovered from here before…


So desperate was he to get on with the job at hand that even with a mortally wounded car, Vettel tried to soldier on, in a display similar to his awe-inspiring drive in Brazil 2012 where he struggled back through the field in his damaged RB8. His problems were two-fold though, with a punctured sidepod leaking fluid out of the left hand side of the car and half of Kimi’s front wing lodged in the same sidepod inlet he spun the car on the next straight, handing the lead to Hamilton, as the Mercedes driver had made his way through the carnage and past Ricciardo into turn one.


The melee prompted the first of three safety cars that afternoon and led to demise of Fernando Alonso who’d also tried to trundle around unaware of the absurd amount of damage that had befell his MCL32. The team were in the dark too, with various sensors and electronics destroyed along with the impact and awaited the Spaniards assessment before calling it a day.

At least he saw the funny side of it though….


The safety car allowed the drivers a few moments of reflection, as the circuit was returned to its former glory and most of the carbon shards swept away. Wehrlein and Ericsson, with nothing to lose, seized on the opportunity to change tyres but rather than switching to inters opted for a fresh set of wet Pirelli rubber.


The second safety car came not too much further into the race, on lap eleven when Kvyat who’d not long dispatched of the Haas of Magnussen decided to snatch a brake and poke his car into the barrier. It was the opportunity that the wet shod runners had been waiting for, diving into the pits to collect a new set of inters, whilst Ricciardo, on the right part of the track when it occurred, seized on the opportunity too collecting another new set of inters.


A discussion heard on the world feed, a little before Kvyat’s crash, between Hulkenberg and his engineer suggested that the German was not yet ready to give up his wet tyres in favour of a new set of inters. As such, when those around him decided to pit immediately he and Jolyon circulated for another lap before making the change, which although this confused both the SKY and Channel 4 commentary teams they didn’t actually lose out position wise, other than to Bottas and Sainz who’d started on the inters and didn’t change for fresh ones. 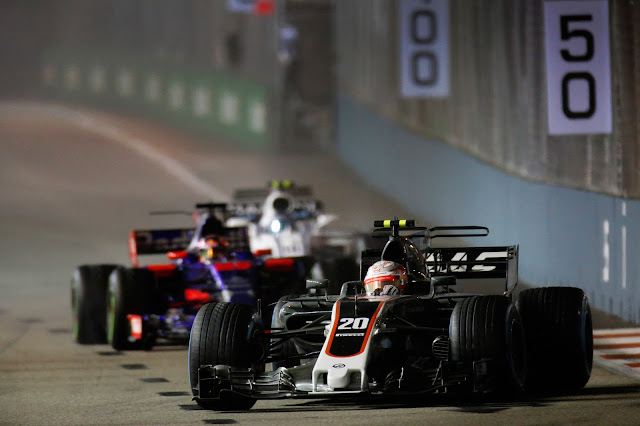 The next big question mark, and one that had been looming since the race got underway really, was when was someone going to gamble on the slicks. On lap 24 Kevin Magnussen made the call to switch to Ultra soft tyres, with plenty of new sets in his allocation, the Dane was hoping he’d be able to make up some time whilst everyone else deliberated whether it was worthwhile.


Sure enough, as soon as the Dane fired a decent heat cycle into the dry weather tyres, tip toeing around the dry line that had started to form, he became the fastest man on the circuit and started a sequence of pitstops that culminated in Hamilton and Palmer’s stops on lap 29. The leaders with no fresh ‘Ultras’ at their disposal went onto used sets, whilst a canny Carlos Sainz Jnr and his strategist opted for a new set of the ‘Supers’, expecting a challenge from his soon-to-be teammate Nico Hulkenberg toward the end of the race. 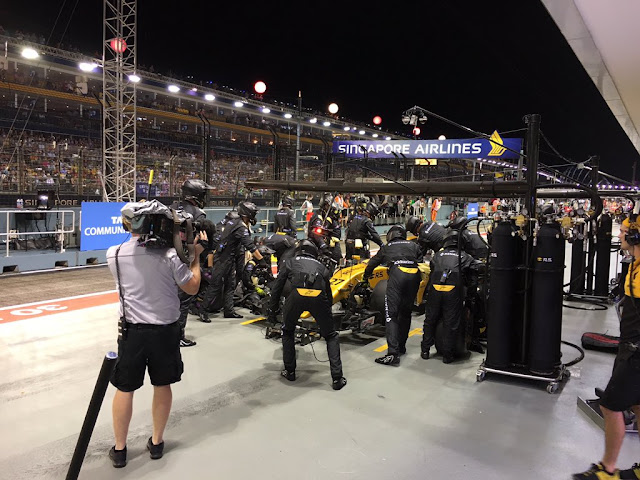 It wasn’t to be though as the Hulk continued his dismal luck of not finishing on the podium, having been as high as second during this race, as he suffered an oil leak that was masked by his pace in the early stages of the race but culminated in a prolonged stop to try and top up reserves and his eventual retirement. Meanwhile, his teammate he ran a steady race picked up the scraps on offer taking a well deserved sixth place - well deserved as Jolyon has had a heap of bad luck this year and also read about the fact that he’d not drive for Renault next season on the internet.


No siesta here my friend 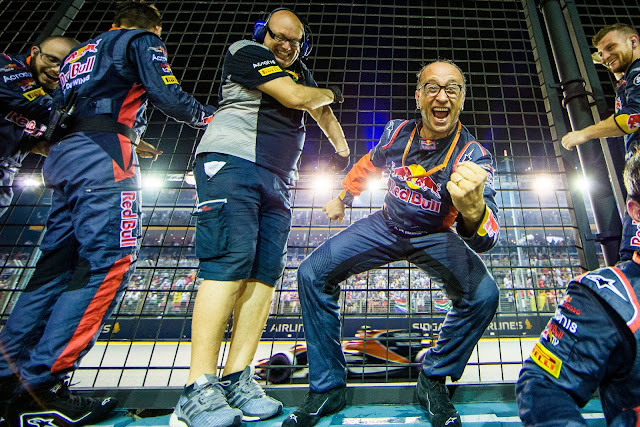 The decision to take the Super soft tyre over a set of the used ultra’s (all that Carlos had left in his arsenal) was to be inspired, as the Spaniard defended fourth position from a hard charging Perez at the end of the race. The Mexican, armed with a faster car and new ultra soft tyres came out just behind Sainz as they all switched onto the dry weather tyres but couldn’t make it pay, as the Spaniard defended for his life and made his feelings known on the radio at the end of the race. 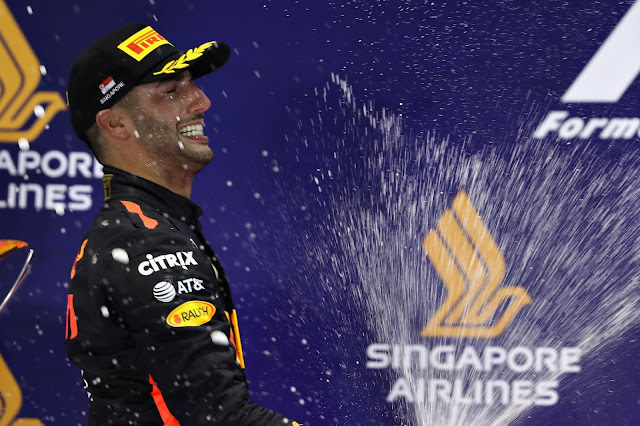 Ricciardo, a shoey in for the race victory when Vettel, Verstappen and Raikkonen played skittles at the start of the race never really looked like he had the pace to trouble Hamilton and whilst everyone assumed that he’d turn it on when on the dry tyres, he and his crew knew otherwise. The Australian’s race was dogged with a gearbox issue from the first safety car onwards, with an oil pressure issue resulting in him having to short shift and run in a less aggressive engine and ERS mode.


A defining moment in the championship then, as Hamilton now finds himself 28 points clear of Vettel with six races left on the board. As fans of the sport, can we feel aggrieved of being robbed of what was essentially going to be a titanic battle between the Ferrari, Red Bull and Mercedes drivers? The collision, fault aside, took out four drivers who could have battled for the coveted podium places, with Alonso having had a fabulous start also forced to retire having soldiered on initially.


The race, which finished on the clock rather than by lap count, was a tense affair and one of attrition more than anything else - as Ferrari will head off to Malaysia licking their collective wounds, knowing that their task has now been made more difficult in the closing races, but will go to Malaysia with not only the promise of a new powerunit at their disposal but now a new pair of gearboxes, that should see them out to the end of the season.

Meanwhile, Mercedes played devil's advocate throughout the race taking the opportunity, when it presented itself to turn the powerunit down and save some mileage for the forthcoming events. Without the threat of serious challenger, given the early loss of the Ferrari and Red Bull trio and Ricciardo’s gearbox issues, Lewis Hamilton simply drove it home, but not without some tentative moments I’d imagine as even the W08 twitched around on the greasy Marina Bay surface.
Tagged
Newer Post Older Post