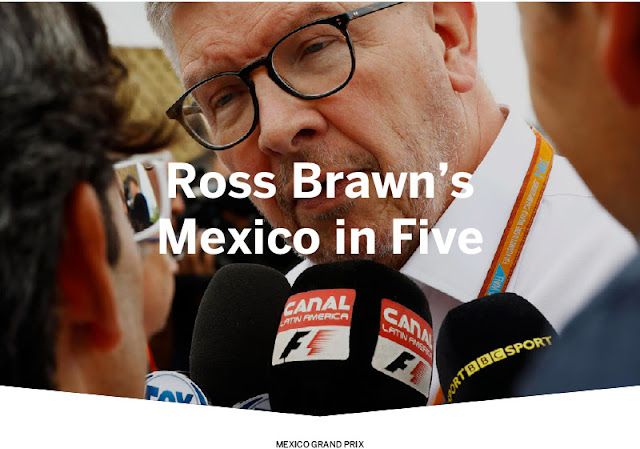 The future's bright
Come the end of the Mexican Grand Prix, Lewis Hamilton did just enough to take the Drivers' title to add to the Constructors' crown his Mercedes AMG Petronas F1 team secured last Sunday in Austin. So first off, congratulations to Lewis and his team for this fantastic performance!
Indeed, Sunday's race packed in so much excitement that it means we can be even more optimistic about what lies ahead for the future of this sport.

At the Autódromo Hermanos Rodríguez we saw established stars such as Fernando Alonso demonstrate that they still have the talent and a will to win that means they deserve to be given the means to fight at the front of the field.

We saw talented youngsters like Lance Stroll and Esteban Ocon shine in terms of speed and in their ability to manage a difficult race without making error. We saw an established, but still young star, like Max Verstappen put on an incredible display that brought to mind some of Michael Schumacher's races.

Finally, we saw two drivers battling for the title go wheel to wheel, dropping to the back of the pack and then fighting their way up the order, which was far from easy. Both of them were well aware just how important the prize they were battling for was. All of it leaves me hopeful that next year we can have an even more exciting and better championship.

Lewis a deserving champion
Lewis Hamilton deserved this title, the fourth of his incredible career. For much of the season he was chasing the leader, but after the summer break he found another gear. It's true that the way in which he clinched the crown yesterday was unusual. It's not often a title comes your way when you've been lapped. However, I have personal experience of the fact that, as you approach the final small step, it can actually prove more difficult than the previous ones. Today was probably one of those cases.
It's not just a fourth title that promotes Lewis to the level of the greatest in our sport, the Schumachers, Sennas and Fangios. It's the way he drove this year that really impressed me, especially in recent races. Even when his car was not at 100% he was able to produce some amazing drives, so really, congratulations to him for a superb achievement.

Ferrari step up
Congratulations also go to Sebastian Vettel, who was a worthy opponent. That fantastic pole lap on Saturday was really magnificent and even yesterday, having dropped to the back of the field, he did his utmost to fight for the title until the very end, once again showing how genuinely quick he is. He didn't do it, but I think that he and everyone at Ferrari can be proud of what they achieved this year and they have a great platform from which to start 2018. In Maranello, they know how to improve and so I expect to see an even stronger and more determined Ferrari next year, which should make for an even more enthralling season.

Masterful Max
I mentioned earlier how impressive Max Verstappen was on Sunday. The Dutchman has only just turned 20, but as a driver he is maturing at an incredible rate. On Saturday it looked as though he'd take his first pole and he was only denied it by virtue of a superb lap by Vettel. On Sunday, though, Max dealt with his closest rival with immense determination and a forceful attacking move after just two corners. From there he controlled the situation with consummate skill and the ease with which he reeled off endless fastest laps I'm sure amazed himself and the team.

And all of that at the end of a weekend that, for him, began in the eye of a political storm following the United States Grand Prix. It was water off a duck's back for Max, which is the way it goes when you are young. Of course the fact that he could rely on a car from Red Bull that has proved to be extremely competitive in these final stages of the season helped massively.

Magical Mexico
I want to congratulate Mexico for providing Formula 1 with an amazing venue. The crowd this weekend numbered 337,043 from Friday to Sunday and they were as enthusiastic as ever. I hadn't been to Mexico City since 1992, when we raced on the old layout, and I have to say I was really impressed. The warmth and passion of the fans could be felt in the paddock and the grandstands. The buzz in the Foro Sol is really unique.

And let's not forget that all of this took place in a city and a country just getting over the terrible earthquake that shook it in September. Well done too to the promoter for having organised every aspect of this Grand Prix down to the finest detail, including a whole host of spectacular elements, that made this a truly great week. Gracias por todo Mexico!
Tagged
Newer Post Older Post