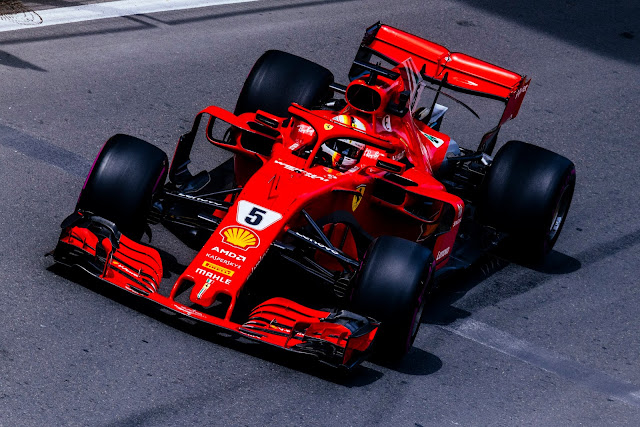 Cloudy skies and howling winds dominated the paddock and as much as the low temps were a point of discussion during FP3 it was the tailwind into the turns that provided much of the entertainment for both drivers and fans alike. Many were the missed turns with Sirotkin being most notable as he removed the right front quarter of his car on turn exit after discovering his personal braking point was about 20 metres behind him on turn entry. Delightfully, this red flagged the session with 6 minutes to go, which totally scuppered Red Bull's plans of making their quali sim runs as late as possible. The track re-opened with just 3 minutes left and even though Verstappen gave it a go, along with most of the rest of the field, the results were hardly representative.

Vettel topped the charts with Hamilton 0.3 seconds back, but with Chandhok estimating that a tow down the straight is worth 3 to 4 tenths, success in qualifying might well be down to teamwork and clever race engineering. Get it right and you're 4 tenths up, get it wrong and your Sunday just got a LOT harder.

5 spot penalty for the Hulk but rumours (ok, Mark Hughes) are rife that the teams are struggling with rear degradation, particularly Mercedes, with their tyres going off in as little as 5 CORNERS. Its possible that Supers might indeed be the Q2 tyre of choice, but with the top teams having only 1 or 2 sets available for the weekend, things could get super fun for that session. Of course, that's from Friday practice so set up changes overnight may help things a bit, but it's clear that Mercedes are a long way from their pre-season confidence of having tamed their diva.

Ferrari has had its new floor thoroughly vetted by the FIA and found legal (they stiffened it a bit) and the availability of engine modes during FP to customer teams is starting to show, with Force india in particular, showing up loaded for bear. The massacre at McLaren has continued as well, with Tim Goss, chief chassis designer, tossed on the ceremonial trash heap, as the team undertakes a full review of why just changing PU suppliers failed to magically fix all their performance issues. Turns out that the metric of being fastest through slow corners is not the best way to judge the overall competitiveness of your chassis. Who'd a thunk it?

Green Light!!  Vettel, Ericcson, Magnussen, Grosjean off right out of the gate, and the rest of the field followed fast behind, nearly everyone on track less than 2 minutes after the session opened. Only Red Bull and Perez hung back. Early shots showed debris from the trees being blown across the track.

Grosjean was the first of the runners off the track at T3, slip road and no damage but those temporary yellows could well spoil many a lap. But it turned out to be worse, as after reversing up the slip road, as the gearbox locked on him and it was double waved yellows and the end of his day, as the marshals removed his car.

Ocon was fastest of the early runners, followed by Perez and Hulkenberg with 10:38 remaining. Red Bull was on the hunt though and it was Verstappen and then Ricciardo seizing the top spots, only to be displaced by Vettel and then Raikkonen. Ricciardo benefitted from a tow that Verstappen offered him and Ocon surprised everyone, going P2. In all the excitement, Hamilton and Bottas slotted in P5 and P6 and with 8 minutes to go. Perez had an off and that left him in a very vulnerable P14 as time continued to drip off the clock.

An interesting argument ensued as the team wanted him to box but he insisted there was plenty of margin. With just 6 minutes of clock to play with the team yielded and Perez carried on, setting up for another effort. Hamilton turned up the wick and scored P2, splitting the Ferraris.
4 minutes to go and Alonso was on it, P10 being the best he could do, well ahead of Vandoorne who was in the hot seat in P15. Perez, Stroll, Ericsson, Hartley and of course the hapless Grosjean were in the drop zone. Leclerc to P14 as Gasly had an off at T15 and unlike many others, had a difficult time extricating himself. On replay, Hartley was limping it in with a puncture and then, BANG!!! Holy hopping closing speeds, it was all but a disastrous collision as Hartley was too close to the racing line and guessed wrong as Gasly just managed to jink round him after inexplicably starting to move inside OFF the racing line. 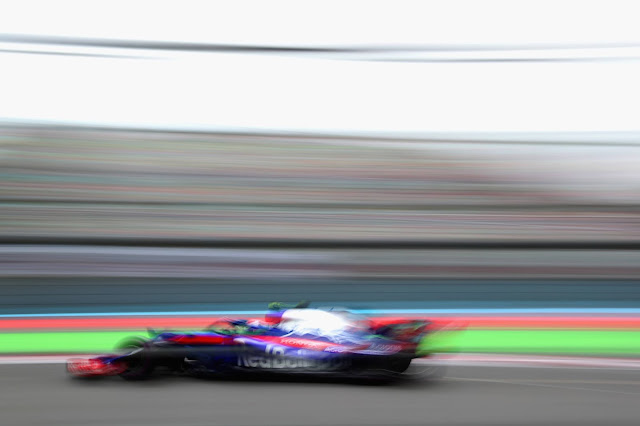 Gasly had just enough time for another run but it was too little too late as the Chequered Flag fell. it was Stroll with the opportunity to stick the knife in and despite a rally style effort through T16, managed to go just fast enough to snatch P15 from the McLaren.

Going no further were Vandoorne, Gasly, Ericsson, Hartley and Grosjean, off in search of some Fisndjan at hospitality as the rest turned it around for Q2. Leclerc with the good effort in P11 was the standout as all the marbles remained to be played for.

Ocon led the way for Q2, followed by Alonso and Bottas. Vettel wasn't far behind and as suspected, all the top runners were on the Super Soft. Hamilton radioed in a big lock up but the team seemed unworried, saying all looked good from their end.

Bottas to the top with his effort, trailed by Verstappen and Ocon. Trouble for Stroll spoiled more than a few laps and with 10 minutes to go it was a fair number of the top runners out of position. Raikkonen had an off, dooming him to linger in P12 even longer as he took to the slip road.

Vettel managed a P3 and with a good hole in the air cut for him by Ocon, Hamilton strung together a lap that sent him to the top. Raikkonen, who had become entrapped in the slip road for quite some time, had finally managed to extricate himself and dove into the pits with just 6 minutes to go and no representative time on the board. More bad news, as kimi got dinged for the weighbridge as he boxed, costing him even more valuable time.

At the interlude, it was Sainz, Magnussen, Raikkonen, Leclerc and Stroll, with Perez in the hot seat. Stand out drive again from Ocon, P5 and within half a second of Hamilton.

Sirotkin and Stroll took advantage of the quiet track to have a go, but it was Alonso that led the way as the rest of the runners exited for their final shot at the glory of Q3 whilst the Williams finished their hot laps. Sirotkins effort came to nought as he overdorve his way through the end of the lap, but Stroll confirmed a P7 as Alonso kicked it into gear for his final go and the clock dipped south of 3 minutes. 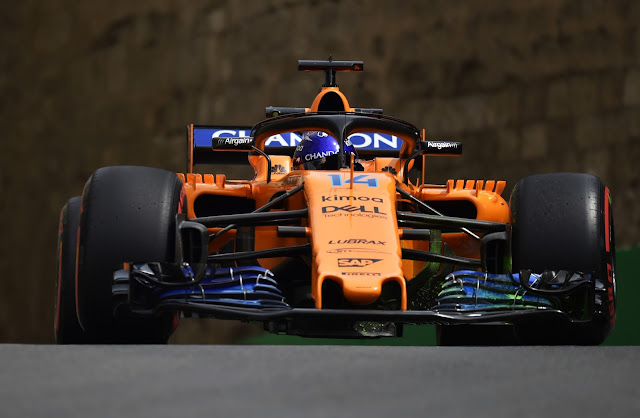 Alonso P11, Perez P6, Sainz P7 Hulkenberg P6 as the times dropped like a stone and mere seconds left on the clock. Chequers!  Raikkonen was still on it and it was P1 but on the Ultras. Ricciardo in P10 was on the Ultras as a defensive move, but abandoned so as to preserve his start on the Supers. Stroll, behind was having a final go, having drifted below the cut line, and no doubt he raised the heartrate on the RBR pitwall as he was looking exceedingly close to putting Danny Ricky out, but it was no doing, by a mere tenth when all was said and done. Stroll, Sirotkin, Alonso, Leclerc and Magnussen were done like a dinner and off in search of some tutovka to drown their sorrows.

Verstappen, Ricciardo and Ocon were the trio that led the way into Q3. Bottas, Perez and Hamilton were the next off the mark and at the tail endit was Hulkenberg, Vettel Raikkonena and Sainz out last.

Verstappen, being first off held all the fastest sectors and it was Bottas in the second group, first to challenge his purples in S1. Vettel picked up the gauntlet though and pressed home his advantage into S2. But as his lap continued it was Hamilton into the 1:41's and momentarily to the top as Vettel cleared the final sector. No surprises for the Ferrari ace in the final turns and he picked up provisional pole, with a 1:41.498 0.342 seconds ahead of Hamilton.

7 minutes to go and Ricciardo reported brushing the wall and requested a second lap as the rest of the runners headed into the pits to prepare for their final run at the palmares. But it was no dice from the team, that brought him in along with the rest.

3:30 to go and off they went, Ocon leading Bottas and Hamilton. Perez trailed out, lonely, about 30 seconds back. The pair of Renaults were next, and then right at the 2 minute mark the rest piled out in a bunch. Raikkonen, Ricciardo, Verstappen and then Vettel. 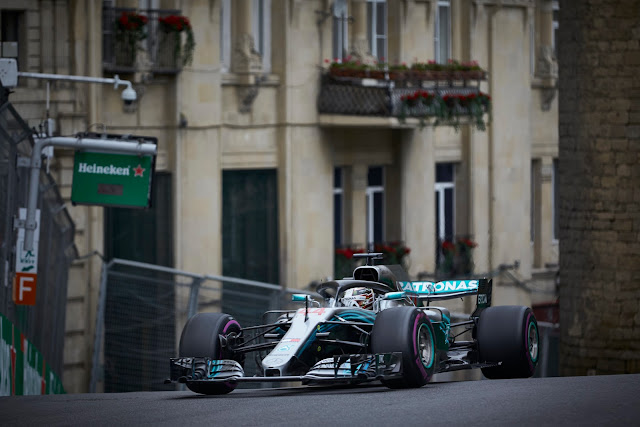 Hamilton was doing the business early on, setting a purple S1 as the rest trailed down the straight to start their efforts. Personal Best S2 and down the straight he thundered. DRS open but not enough, an improvement to 1:41.677. but Raikkonen was the one on a tear, going purple through the first 2 sectors and then just too early on the power out of T16 fishtailing on the exit and throwing it all away, after a particularly bit of vicious tailwind unsettled his rear on entry. Vettel had no response to Kimi's effort having locked up early at T3, and just sat back and watched it all come his way. And it wasn't just P1 that Kimi tossed, the mistake dropped him the following 5 positions as well and a Ferrari lock out. Ouch!! And that's before you consider him starting on the Ultras and needing an alternate strategy to all the rest of the frontrunners 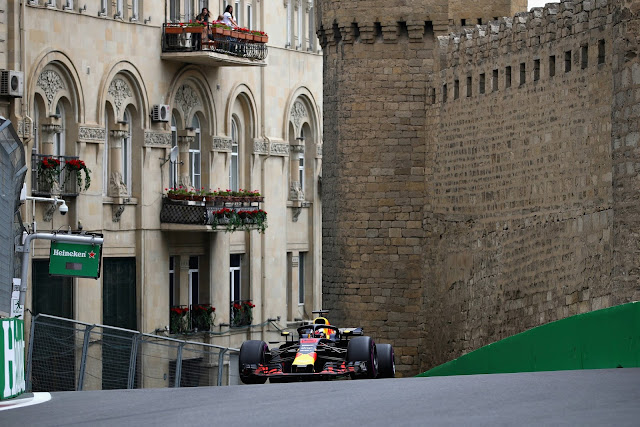 Ricciardo took P4 away from Verstappen and that was that from the sharp end. From there it was status quo ante, Ocon, Perez, Hulkenberg and Sainz rounding out the top 10 and confiriming the return of Force India to the top end of the midfield.

Baku is alway an interesting race, the walls and narrow nature of some of the turns make for all sorts of unpredictability, but if the predicted weather holds (winds north of 60 kph, much cooler temps) it should be a whole new level of crazy. Bottas in P3 is the interesting play, as Vettel will look to cover Lewis and the dirty side of the track is well, gonna be exceptionally dirty. RBR had the race pace on Friday as well, and the midfield looks like just the kind of madness to keep Bernd Maylender the fastest man on the track for large chunks of the race. Raikkonen on an alternate strategy may also wind up being a bit of a wildcard for Ferrari, depending on how the early phase of the race shakes out. In other words, could be worth watching....

Remember, Play nice in the comments!