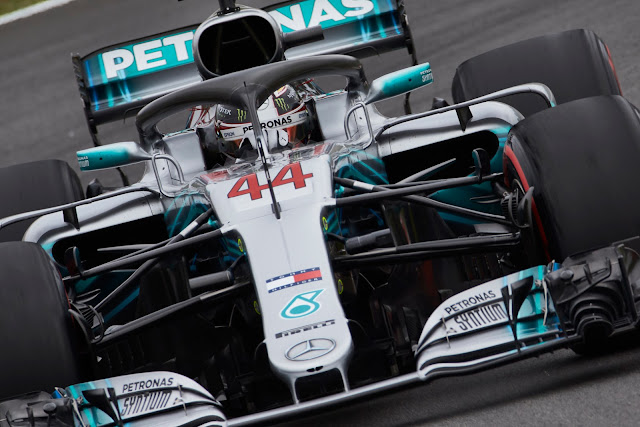 IT was a dark and stormy night... wait a minute..... random, unpredictable winds lashed the paddock as ominous clouds scudded overhead in the run up to qualifying. The possibility of rain was added to a long list of uncertainties gathered throughout the weekend (new surface, new tyres, many updates) as the teams worked desperately to find that last hundredth before sending cars and drivers out to do battle in qualifying.

At Red Bull, the pace was frenetic as Max Verstappen suffered a failure in practice when he used the overtake button at launch and the electrics on his car melted down and threw a proper teenage sulk. The floor was off and they were in full on find it and replace it mode with most of FP3 left. At Toro Rosso it was even worse as Brendan Hartley managed to find the grass trying to widen the entry to the high speed T9 and put his car full on into the wall with such force that the rear end simpy fell off as the marshals attempted recovery of the vehicle. IT was a savage incident and after having had a very good session working through his issues on the car it looked likely that he would not make it out for quali, such was the damage done.

For Mercedes, the Super Softs looked suspect, barely hanging on for a single lap, but even at that they were fastest by some margin for the team from Brackley. The practical implication is, if they make a mistake on their first run, the second will be slower so it's either pit or live with it. Thus, the Soft would likely be the tyre they prefer to start with, as in Friday's practice they had some issues with pace on a longer stint, especially relative to Red Bull. RBR, on the other hand, was so dedicated to the Supers that they actually ran Mediums for most of FP3 so as to save a fresh set for quali/race, with Danny Ricky able to take P5 on the hardest of compounds available for the weekend.

Ferrari, too, were quick on the Supers, not as fast as Merc but much closer than yesterday. This seems to be a Friday tradition, and one that extends for more than just this season. Of course, with the 3 PU limit in effect, management over the weekend matters more than ever, so it's not necessarily a surprise to see teams looking like they're sandbagging, especially in Friday practice.

HAAS look strong again, no surprise as they went exceedingly well here in testing, the only question for them being can they get their operational act together enough to get both drivers into the points, a result they desperately need to move up the midfield pecking order. Alonso and Gasly both had good laps and Renault look strong, although Sainz (quite possibly inadvertently) ruined Hulkenbergs best shot at a representative quali lap. To be fair, Vettel did the same to Sainz, and after berating his team for not warning him (he was exiting the pits) he asked them to apologise to Renault on his behalf.

Green Light!!  Stroll, Sirotkin led the way followed by Raikkonen and Vettel, as with the threat of rain, there was not to be the usual interval of lolligagging about in the pits and the track filled rapidly. Directly into the 17's for both the Ferrari drivers, with Vettel leading the way in 1:17.806 as Mercedes got busy with Lewis rocking out of the garage with just over 13 minutes left in the session.

HAAS continued to look strong, with Magnussen and Grosjean looking significantly faster than the rest of the early midfield runners. Perez for Force India was nearly 0.2s off as Renault was just getting itself underway. Hamilton's early effort put him faster than Vettel, but he was rapidly overruled by Raikkonen, up to a 1:17.483

But Alonso was the real surprise, pulling P5 on a set of MEDIUMS!! Which, wow... Vettel then put in his best effort, going just about 1:17 dead, as Bottas backed out of an effort, and headed for the pits. As it stood with just under 7 minutes left, Vettel, Raikkonen, Ricciardo, Hamilton and Bottas were at the top of the charts while Ericsson, Stroll, Sirotkin and Hulkenberg had it all to do. Vandoorne was in the hot seat as the finale of Q1 approached.

Verstappen stuffed one in with about 5 minutes left, going P2, as Hulkenberg had issues with what sounded like his gearbox, to the great consternation of Renault. 3 minutes to go and things were hotting up for those on the outside looking in... Renault had managed to get Hulkenberg sorted and he was out of the garage with enough time to get a run in.

Under a minute and it was Ocon on the bubble as the last, desperate efforts were underway. Hulkenberg rocked in with a P14 but the other drivers were on it and to P15 he went and then Vandoorne went P15 and that was that for that. Stroll, overdriving as usual, managed to go backwards off the track and out of qualifying. Into the gravel around T13 it was, killing Sector 3 for all the drivers behind him. And thus it was that Hulkenberg, Ericsson, Sirotkin, Stroll and Hartley were off in search of tapas while the rest turned it round for Q2.

Grosjean and Magnussen led the way for Q2 shod with Softs, as were both Ferraris and Mercedes. Red Bull followed suit and it was clear that Softs were the place to be for the start of the race. Interestingly, with an increase in this tactic, it could be argued that it was time to revisit the tyre rules for qualifying.

Vettel, Raikkonen Bottas, Hamilton, all in that order, followed suit. Vettel crushed it with a 1:16.802 and the rest were within 0.2s of each other, just the wrong side of 1:17. Verstappen then Ricciardo and the early starting HAAS were best of the rest, Magnussen marginally ahead of Grosjean. Hamilton complained that the track had not been properly cleaned following Stroll's shunt, perhaps explaining his P4 as he grabbed a giant handful of oversteer right where the Willams spewed gravel all over the circuit in Q1.

KMag was the standout of the session, however as he was just 0.001s off Danny Ricky's time, on the same compound. Vandoorne, Ocon, Leclerc, Perez, and Gasly were all on the outside looking in, and with 5 minutes left they were getting ready for their last tilt at the glory of Q3. Sainz was in the hot seat and as they headed back out it was Hamilton, out on the Super, surprisingly enough. Fuel pressure issue for the Hulk is what put him out in Q1 and as the last seconds ticked off the clock, RoGro had an off. Checquers, then Gasly P12, Vandoorne P11. Sainz P9 leaving Alonso P10 as Q2 came to an end. Off for sangria went Vandoorne, Gasly, Ocon, Leclerc, and Perez as the rest turned it around to battle for the ultimate palmares. Magnussen managed to split the Red Bulls and it was a fairly impressive display, with HAAS basically 0.4s off the pace of the back of the sharp end.

Q3 was kicked off by Sainz, followed by the HAAS, with Grosjean leading the way. Red Bull were next, then Hamilton followed by the Ferraris and Bottas the lanterne rouge. BANG!! 1:16.858 for Danny Ricky and then a squeenze faster for Verstappen. Hamilton was on a tear and he went provisional pole with a 1:16.491. Bottas could only manage P4 with Vettel P5. A second effort for Vettel saw him by Bottas and Raikkonen spoiled his first effort with a mistake in S2, leaving him dangling in P7 as they reset for the last run at glory. Alonso had a good run, into P6 and something went terribly wrong for Magnussen, as he was nearly 20 seconds off the pace. Magnussen was out first, followed by Ricciardo, who was running the Softs. Magnussen to P6 and into the 17s and Danny Ricky stayed P3 as the Softs offered no succor to the Red Bull runner. Ferrari decided to follow suit and were onto their warm up lap running the Softs, before Ricciardo put his time up onto the board. 3 minutes to go and the rest of the front runners cranked it up as they cracked timing and scoring to kick off their hot laps.

Hamilton, again on it, was purpling the board as Raikkonen managed a P2 and ZOMG it was Lewis with a 1:16.173!! Bottas nearly upset the applecart, going just a tenth slow of Lewis' effort, leaving just Vettel as the final threat to Mercedes dominance. It was a neat effort, with Sebastian thereabouts through the first 2 sectors, bit of a wiggle out of the final chicane and P3 was the best he could manage, 0.2s off Hamilton's time.  Verstappen was P5 and just like Noah, it was 2x2 at the sharp end of the grid.

Magnussen managed to hang onto P6, with Alonso just a tenth behind on the Soft tyre, so Macca looking to favour the harder compound in the race, but will be starting on the Softest. Sainz then Grosjean rounded out the top 10.

With a hard rain predicted for tonight, tomorrow's race looks potentially promising indeed. With the weather being different to Friday, teams that get the cooling right will have the advantage. Barcelona is front limited, with the front left taking the most damage. Race pace on the Softs looked quite similar amongst the top teams and given the new surface, it's quite likely that the front runners will be looking to one stop, which would be a loss for Pirelli. If Mercedes make it to T1 unscathed, look for trailing teams to run split strategy, with one driver rocking the undercut and the other going long. Red Bull were absolutely able to run longer stint with the Super so that may offer them a strategic option in the event of a later Safety Car. At a toss, the long run to T1 also offers more than a few opportunities for fun and entertainment, along with the odd piece of loose bodywork. 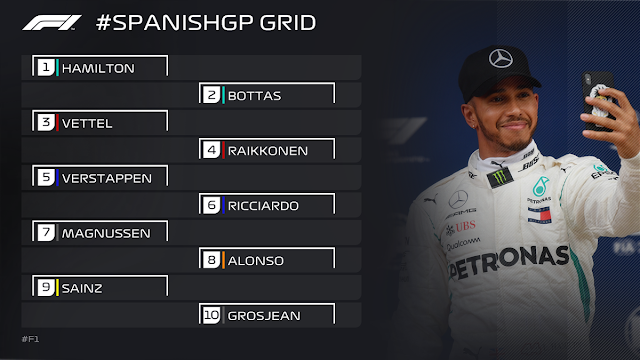