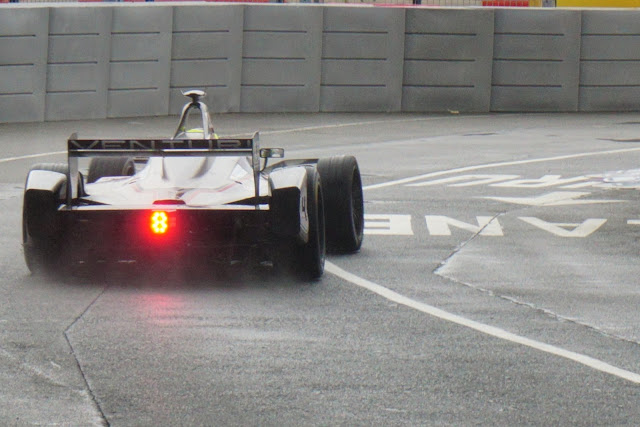 Brooklyn was treated to a rather spectacular storm overnight, and the teams arrived to find the pitlane a bit flooded. On the bright side, the dust that plagued everyone at yesterday's race was now no longer a concern. Which was a good thing as they were using blowers to try and clear the surface as I left the track last night.

When the pits opened there was enough water on the surface of the track that the drivers were throwing up rooster tails and down the long straight, visibility was scarce for following cars. Early days it was Rosenqvist for Mahindra at the top, the first to crack into the 1:20's.

With 35 minutes to go, the track was getting full but the drizzle continued, a dry line of sorts appearing but plenty of data still for Michelin on the all weather tyres that are specced for Formula E, in what was essentially its first ever full wet session.

Making things more challenging is unlike the surface of a purpose built track, these circuits are truly streets and the fact that heavy trucks and buses regularly use them the rest of the year meant that there were plenty of bumps and hollows for water to puddle in. Despite this, times were continuing to drop until Sam Bird became the first victim of the wet. He coming around a corner and found a slower Venturi ahead of him and lost it under braking, slapping the wall and damaging his suspension before wrestling the car into a little run off area and giving the barrier the mildest of kisses.

Back to the pitlane for him and to the top went Audi with 28 minutes left in the session. At first it was di Grassi just ahead of Abt, but Daniel stayed out and took the honours away from his teammate, possibly a bit motivated after the contretemp yesterday, going 1:18.699 to be the fastest of all by time the session ended.

Standing by the exit of turn 2 it was clear that the Audi looked most planted of all, with Renault not too far off. Vergne's Techeetah looked fast, but also quite a handful and he finished the session P8, with his teammate just ahead. Presumably they will be looking for the weather to clear  before qualifying, otherwise their fight to maintain the Constructor's lead over Audi will be a difficult one indeed as they currently are hanging on by a margin of just 5 points. Early leader Rosenqvist also had a trip to the barriers later in the session that ended his running prematurely. Lopez joined the spin it to win it club between turns 8 and 9 but it was da Costa, who had a lurid slide about a third of the way through the session who suddenly and surprisingly showed up in P3 for Andretti.

Yesterday's pole sitter Buemi also was on top of the leaderboards for a while, before settling for P4, just ahead of di Grassi. As the session drew to a close, the rain picked up in intensity, and times began to drop. The weather is supposed to clear for qualifying but as to whether or not the track surface dries by then is anybodies guess.