Matt 'Trumpets' Ragsdale talks us through the ins and outs of qualifying for the Mexican GP...

After the changeable weather at COTA produced such a stellar race, the Mexican GP seemed honor bound to try and best it, and with Friday's track temp of 47° melting all of the top competitors, along with the Hypersoft tyres, it seemed another dose of unexpected results was in line for the weekend. Hamilton P7, Verstappen P1 with Sainz and Hartley both ahead of the Mercedes was definitely a shake of the head for most observers.

As it turns out, Mercedes had cranked the PU down to prevent overheating, so their results weren't ever going to be representative, but even with the lower power, they, along with Ferrari, couldn't get more than 2 or 3 laps of a long run done before the Hypersoft tyres started dropping 3+ seconds a lap. Red Bull were doing a bit better, but clearly whatever calculations had been done when these tyres were picked, had been changed massively by the brutal heat on track.

FP3 then naturally turned up cold and damp, with no running for more than half the session as the track was in that perfect state where Inters were burning and slicks were, well, TOO slick, before finally brave Sir Alonso took to the track on Hypersofts to show it could be done. With that the dam broke, the track filled and Verstappen confirmed his speed, going P1 this time without a hydraulics failure to mar his effort. Hamilton was just a tenth back, presumably benefitting from a PU turned up to 10. Not so much so for Bottas, whose engine cut out on him near the end of the session, resulting in an engine swap, though no penalty as the one he will be using for the rest of the event was already in his pool. Vettel P3 set his times earlier whilst the track was still evolving and Ricciardo P4 was held due to traffic.

Leclerc was best of the rest as the Alfa strongly seemed to love these conditions, Ericsson also being in the top 10 with just Gasly in between. Sainz too, was a fan of the wet/dry (or was it dry/wet?) outpacing Hulkenberg to go P7, as with Bottas out the Formula B spots started P6. not having fun were Force India and HAAS, Ocon P11 and Grosjean P13. Kmag suffered an intercooler change and had no running at all, just to add insult to injury.
As qualifying fast approached, along with potential showers/ thunderstorms, the teams feverishly worked to ready the last minute changes to cars, forced to account not only for the weather today, but the weather tomorrow as well......

Green Light!! Gasly was first out on the Hypersofts, as the track had warmed all the way up to 25°, essentially half of yesterdays temperatures. Bottas had his new engine installed with nary a fuss and it was Valterri that followed Gasly onto track, albeit at a 30 second gap. Hamilton followed his teammate, with both on the Ultras, presumably to do with their remaining tyre inventories. Sirotkin and Vettel followed just as Gasly finished his first hot lap, going 1.17.876.

Bottas was quick to dispatch that, going into the low 1:17s,, but Raikkonen and Vettel on the Hypers smashed that. Hamilton was closer to the Ferrari's going 1:16.746 to Vettel's 1:16.089. Raikkonen was sandwiched in between as the Formula B runners rocked onto their laps. Ericsson, Leclerc, Grosjean and Gasly in that order from P5 as Red Bull had yet to emerge from the pits with 12 minutes remaining in the session. Ocon to P6 and then Perez to P5, drawing huge cheers from the crowd.

Bottas was told to try one more push lap, but to abort if he needed to save his tyres for the race. Hamilton reset his time, drawing closer to Vettel, just 0.378 seconds back. Lockup for Vettel torched his Hypers, leaving them with bald spots as he was forced to pause at the weighbridge on his way back to the pits. Red Bull was out as well and Ricciardo was en fuego (possibly correct, don't @ me) and to the top he went, only to see Verstappen, starting with a pedestrian Sector 1, going to the top with a 1:15.756. Hartley was through with a P8 and it was Vandoorne, Alonso, Magnussen, Stroll and Sirotkin on the outside looking in with 6 minutes left in the session. Grosjean sat on the bubble as the track cleared and the teams undertook the last tweaks to try and get their drivers into the promised land of Q2.

Taking advantage of the clear track, Mercedes sent both drivers out on the Hypersoft tyres, to get a read for Q3 with the stated goal of getting of starting on the Ultras. Bottas seemed to like the tyre better, going to the top with 1:15.58 faster than Hamilton who was almost a full tenth slower but still ahead of the Red Bulls. Suddenly, it was Ferrari who was a bit of a wonder, though given the condition of FP3 no doubt track evolution was playing its part.

Of those in the drop zone, Alonso was first on it and as he crossed the line, it was P7, with Vandoorne up to P8. Sainz was next to improve, then Grosjean pushed Leclerc out. Leclerc was still on it, though, with Hartley outpointing Gasly as everyone was into their second efforts. It was all madness and chaos and as the times were sorted, it was Grosjean, Vandoorne, Magnussen, Stroll and Sirotkin off in search of some mole as the rest turned it round for Q2. Torrid result for HAAS, already plagued by reliability on Magnussen's car, though in light of a similar Q1 departure in 2017, perhaps it's their bogey track....

Listening to Grosjean, it was an inherent weakness out of slow speed corners, with sudden snaps of oversteer as he attempted to get on throttle on exit. Nothing doing now, but not helping their chase of Renault in the slightest.

Bottas and Hamilton led the way for Q2, followed by Raikkonen and Vettel. Red Bull were out early as well, with all of the top 3 on Ultras, half the midfield on Hypers and the Force Indias on Supers. Hartley and Alonso sat and waited as this time around, as this time around Hamilton was quicker than him, by a robust 0.279 seconds. Much closer was Vettel, again 0.071 seconds back and then it was Verstappen to the top, by a ridiculous 0.004 seconds. Ricciardo had less luck with his run, but it was still enough to put him in front of Bottas. Raikkonen, still floating on a wave of glory from COTA, was the slowest of the top 6 and he was just 0.25 seconds faster on Hulkenberg, who set his time on the Hypers.

Alonso and the Force Indias were out in the interval, followed by Hartley. Gasly with a penalty was possibly done and it was Hartley going P11 and Alonso P14 on used tyres. AS Alonso crossed the line, Gasly emerged from the pits with both Force Indias circulating slowly on their Supersofts. Gasly rocked back in without setting a time and the track was empty, with Hartley, Perez, Ocon, Alonso and Gasly in the drop zone and Ericsson firmly planted on the bubble as the teams turned it around to tilt for the ultimate glories of Q3.

Alonso was first off, with 2:30 left, followed by Leclerc, Vettel, Ocon, Sainz, Ricciardo, Hulkenberg and Ericsson. The briefest of intervals, and then it was Hartley. Perez, Hamilton, Raikkonen, Verstappen, Bottas and Vettel. Both Force Indias were rocking the Ultras and the top runners just out on Hypers, just in case and to get a feel for the

Alonso to P12, Ocon P11 and then P7 for Hulkenberg. Perez was next through, just into 13th as Hartley was shoved into P14 as he messed up his lap. Off for some reposada they went, while the rest turned it around for the shoot out on the hallowed grounds of Q3.

Ferrari led the way into battle, Raikkonen followed by Vettel. Mercedes were dead on their heels, Hamilton first, then the Renaults and Saubers, with Red Bull last team on track. Early days it was Vettel fastest through Sector 1, with neither Mercedes looking brilliant. Sector 2 saw the tables turned, with Hamilton turning it purple. Sector 3 and it was not enough for the Mercedes driver, with both he and Bottas splitting the Mercedes. Verstappen was looking fast as Ricciardo split the Mercedes duo, going P3 as Verstappen laid down his marker, going 0.185 seconds faster than Vettel to take provisional pole with a 1:14.785. Leclerc was best of the rest but Renault were out with used tyres so with that in mind, it was all to play for as the teams retreated to the pits, and got ready for their last shot at glory.

Just under 3 minutes and they all decided to leave at the same time, with Bottas and Vettel nearly coming to blows in the pitlane. This time, the Mercedes runner outwaited Verstappen, possible at the expense of perfectly preparing the tyres, since he and Max were both going to have to hustle a bit to hit the line before the checquers fell.

Raikkonen was first off, with both drivers neatly throgh the first sector but both slower than their first run. Behind, it was Ricciardo improving and Hamilton, with everyone else holding station. P6 for Raikkonen, Vettel stayed P2 with Bottas and it was Ricciardo, into provisional pole with Verstapen and Hamilton left. A bit of a wiggle, and pole belonged to Ricciardo, with Hamilton having done just enough to get ahead of his title rival. P3 then and that rara avis of a Red Bull lockout, last seen in the 2013 US Grand Prix. This apparently displeased Verstappen, as he smashed his P2 bollard down on the grid, much to the amusement of the crowd.

On fresh tyres, Renault was unstoppable in Formula B, Hulkenberg again faster than Sainz, then Leclerc and Ericsson. But a serious problem as well, since they were doomed to start on the Hypers while those chasing behind would have the advantage of longer running, with the early pitstops certain to drop those on Hypers into painful traffic that will extract a maximum amount of pain and slow their times considerably.

At the sharp end, without a Vettel win, it's a Lewis championship to be celebrated, but honestly that's nothing compared to the almost certain to develop fireworks between Ricciardo and Max, with the Aussie snatching pole position out from underneath Verstappen's nose at the very last moment, the Dutchmen blaming a non-compliant car for his misery at the end, and clearly unhappy at the outcome. Tomorrow's race has plenty of opportunities for plot twists: will Vettel spin (well, OK maybe not the best example) will Grosjean get a race ban with just 2 points to spare (OK, I'll work harder on those next time)? With lap 1 traditionally being a bit of a demolition derby, it's truly anyone's race to win and with the altitude playing its part, robbing engines of power, reducing the benefits of aero and making cooling massively more challenging another tomorrow's race will certainly be one worth watching. 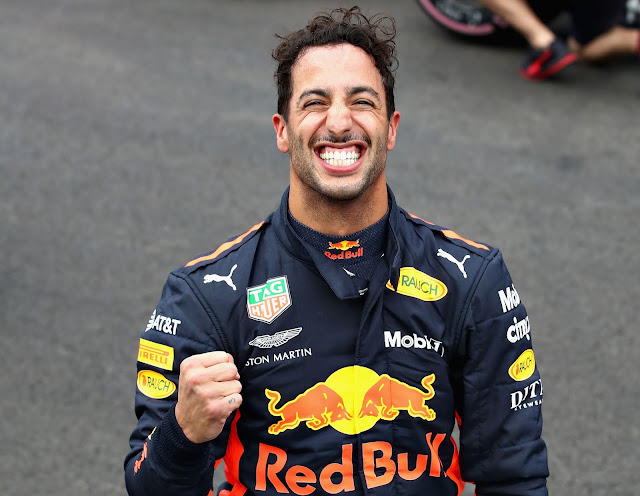 Remember, Play Nice in the Comments

How close was that battle for pole between @danielriccardo and @Max33Verstappen?