Hello 2019 (Explaining some of the changes F1 has made)


Formula One underwent a dramatic aerodynamic overhaul in 2017, which was, in reality, a belated response to the negativity that grew up around the arrival of the new cars in 2014. The beginning of the ‘hybrid era’ was a fiasco (1) in terms of publicity, with everyone from those on the inside, to those on the fringes critical of almost everything that the sport had to offer that year.

In an endless stream of alternate Formula One realities that could exist the sport would have been in a much better place right now if it had either kept the 2013 aerodynamic regulations and introduced the hybrid powerunit or changed just the aero regs and kept V8’s and a mild KERS system.

The problem for F1 in those burgeneoing races of 2014 is that they’d done both, almost completely pressing the reset button, and it was taking time for everyone to get the best from their new machinery. What’s more worrying is that no-one seemed to grasp that increasing the cars weight by 91kg and also stripping away the downforce available would also initially result in a dramatic drop off in laptime.

For the sake of clarity, 91kg is just over 14 stone, so it was like strapping a passenger in the car and that’s all mass that needs to be accelerated, and what makes it easier to accelerate mass through a corner? Yea, you guessed it - downforce.

As the teams started to understand the regulations and the powerunit manufacturers started ramping up the settings things got decidingly better. In fact, one could argue that cancelling the change in regulations for 2017 could have, indeed should have, happened relatively early on. But hey, there’s just another branch in the Formula One alternate universe theory.

Instead Formula One sleep walked itself into another issue, as we pretty much all knew that whilst the 2017 regulations would improve the look of the cars, piling on that much downforce would always result in an issue when it came to wheel-to-wheel battles.

Of course, you can always try to influence things with sticking plaster solutions like high degradation tyres and DRS but if they offer linear performance parameters the teams will simply engineer their way around the issues. In the case of the tyres, albeit being wider, which does actually look a lot better, the offset in performance and allocation options mean that strategic variation is limited. This has led to teams and drivers opting to baby their tyres to the point where they only have to do one stop per race, avoiding further lost time and any potential blunders during a pit stop (Sorry Haas). There have been occasions where a driver completing an extra stop can be rewarded but this is a strategy full of risk, often only chosen by those who feel they have nothing to lose or are willing to the roll the dice for the sake of losing a couple of points.

DRS has now seen 8 seasons worth of action and love it or loathe it, it was a necessary evil to combat a problem that has existed in the sport for some time. The problem is that it’s become incredibly a rather mundane and well understood concept - aerodynamically speaking, due to the static nature of the regulations that revolve around it. That will change for 2019 though, which we’ll come back to later on, but as I’ve suggested before it could be so much more! (2)

Anyway, I’ve got sidetracked here, this article was supposed to take a look at the changes the sport is undergoing for 2019. However, as I think I’ve just proven, if things had been managed differently we could already have a very different sport…

A study undertaken by FOM’s technical working group identified this as problematic for a trailing car, with them losing upwards of 30% of their overall (3) downforce when sat in the wake of another car. To help combat these issues the FIA have sought to simplify things and whilst there are some other changes, the main ones worth discussing are as follows
The new regulations seek to reduce the front wings role in generating outwash, a tool used by aerodynamicists to push flow out and around the front tyre, drawing the wake ordinarily created away with it and reducing the impact that has on overall loss in downforce that is seen when trailing another car. 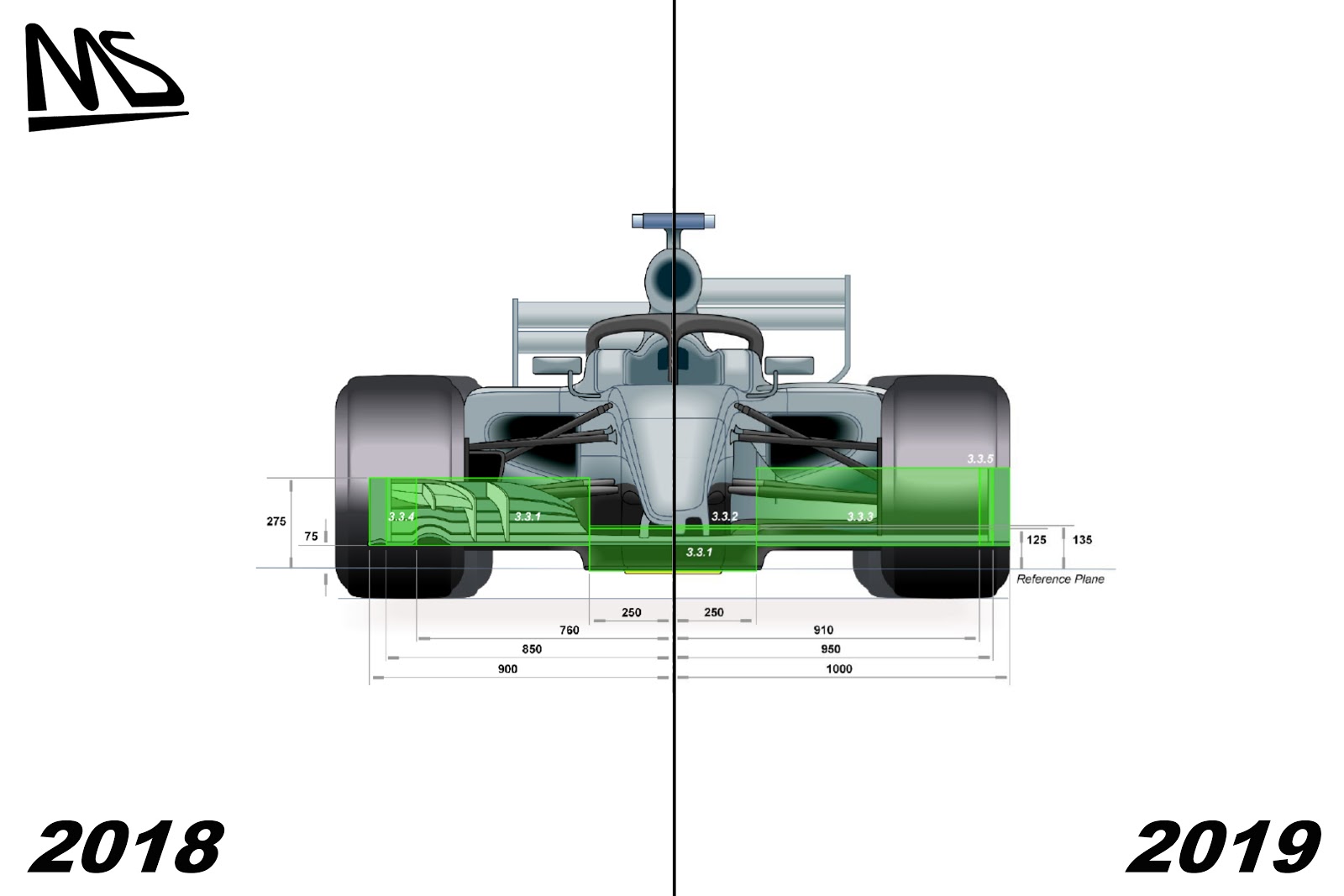 The front wing will be a very barren place in 2019, with cascades, winglets and canards all off the menu, whilst the design scope of the flaps, endplate and even the under wing strakes have been heavily curtailed too. The wing is 200mm wider and will terminate inline with front wheel (as it did in 2009) and can be upto 300mm above the reference plane, rather than 275mm like its predecessor.
The simplification of the flapped part of the wing not only limits designers to five distinct elements but does away with the complex arched shapes we’ve seen proliferate the outer section of the wing in recent times, instead the surface will have a much gentler curve, although I do think there’s still potential for some outside the box thinking here. 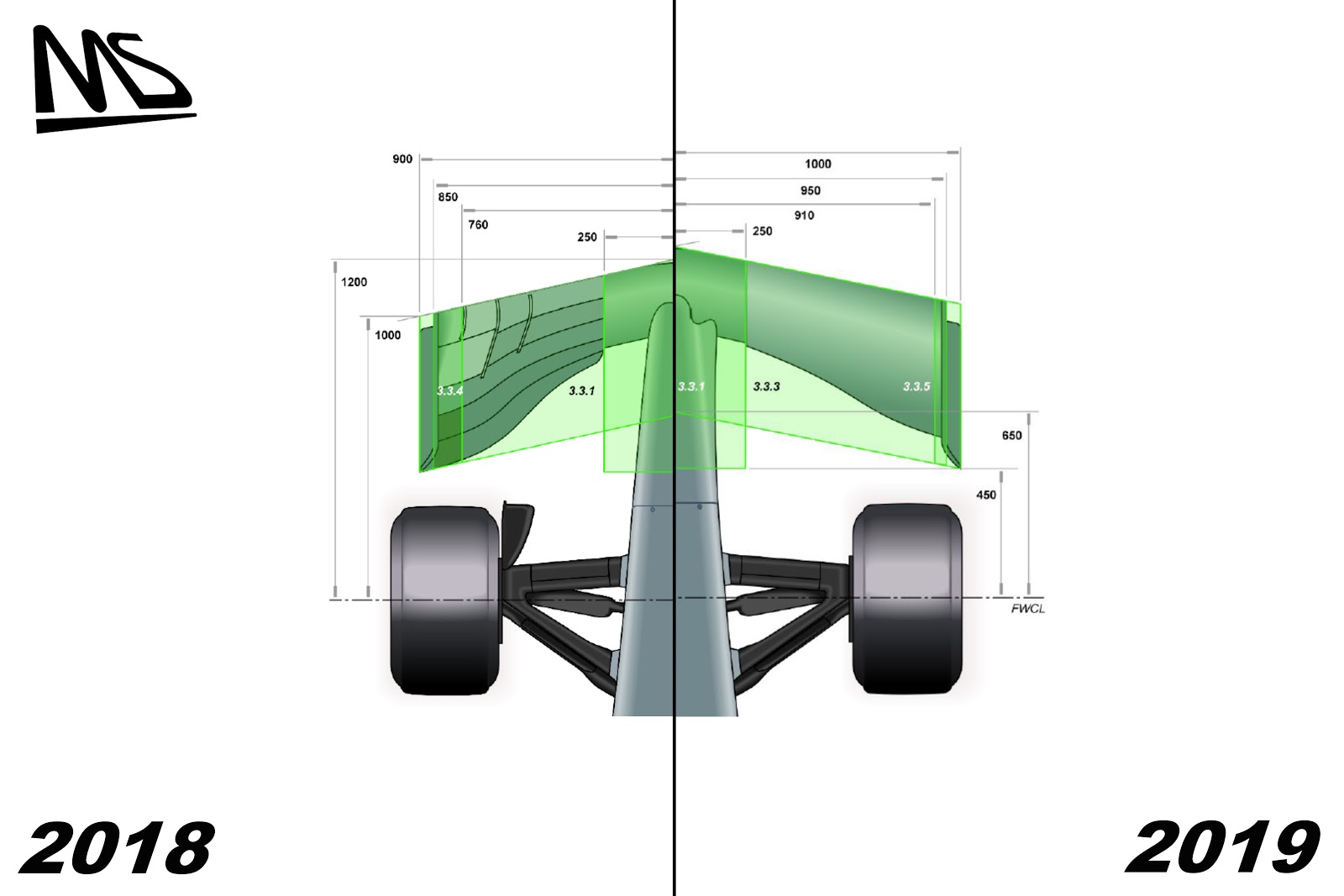 As we can see from the top-down view the front wing has been moved forward by a further 25mm for 2019 too, with the forwardmost point set out at 1225mm, rather than 1200mm. This is partly to do with the geometric issues raised by having a wider wing but also puts the neutral central section further forward too, hopefully meaning it’s less influenced by the lead cars wake. The governing body have also tidied up the brake ducts too, reducing their scope for use as aerodynamic surfaces. This has been done by mandating a maximum size to the singular inlet that can now be used, whilst including a clause about singular tangent-continuous curves - meaning no tricky business when it comes to the shape of the vertical fence and rules out the possibility of flicks and winglets currently used to guide air around the tyre.

On top of this, the FIA have seen fit to rid the sport of the blown axle that had become commonplace up and down the F1 grid. Article 11.4.3 stipulates that no airflow may pass through a circular section 105mm from the centre axle of the wheel and its fastener (the wheel nut). This is another example of the designers being hamstrung, as the blown axle was used to enhance the outwash effect, with no fewer than eight teams utilising it in one form or another in 2018. 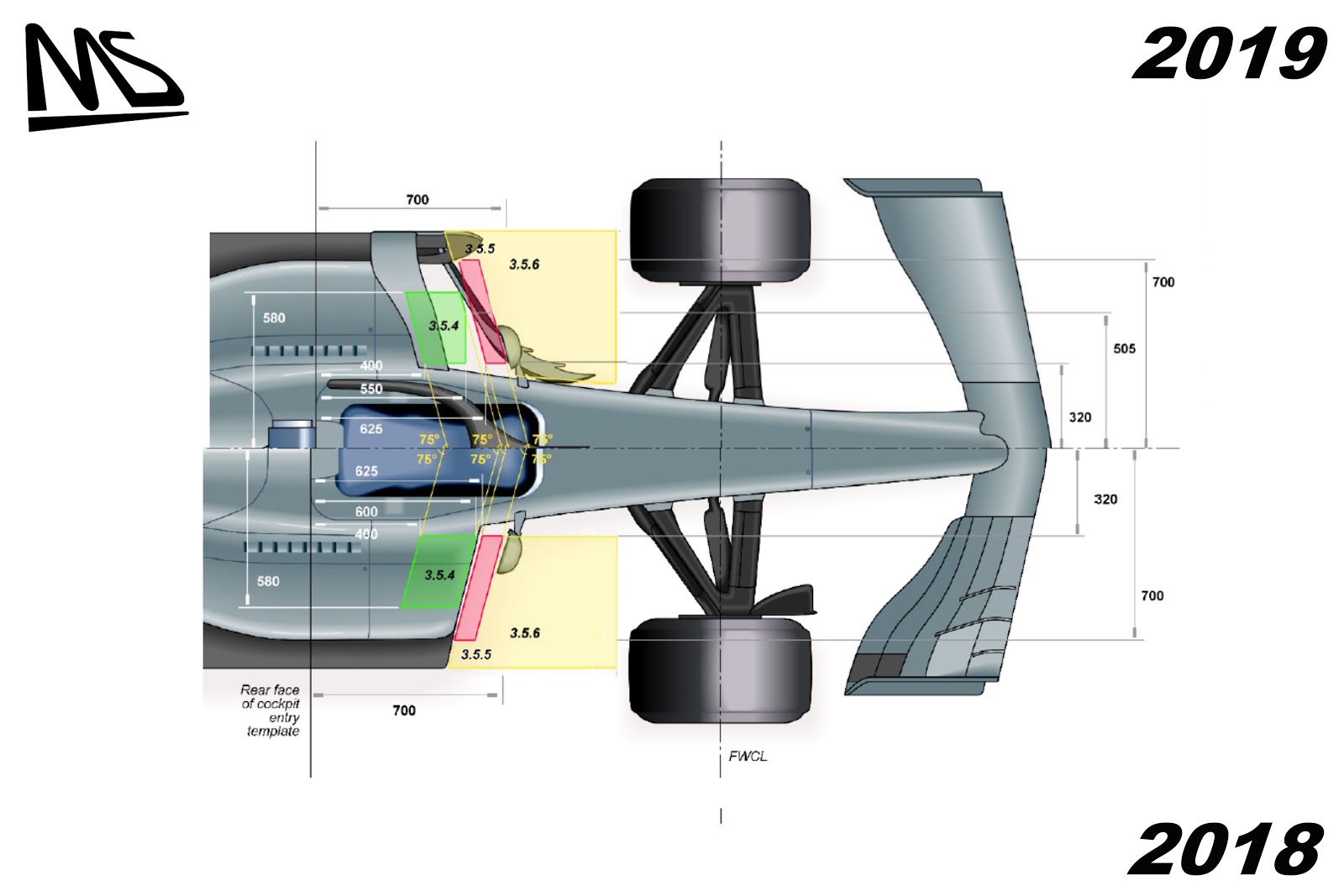 The regulations surrounding the leading edge of the sidepods and bargeboards have also been adjusted, as the height of the bargeboards have been scaled back to 350mm, from 475mm. Meanwhile, you’ll note the box region in which they can be placed has been tidied up too, allowing a closer placement to the chassis.

To further limit the geometrical trickery used to design the sidepods and its associated aerodynamic paraphernalia you’ll also note that the green box region marked 3.5.4 has been tidied up too. 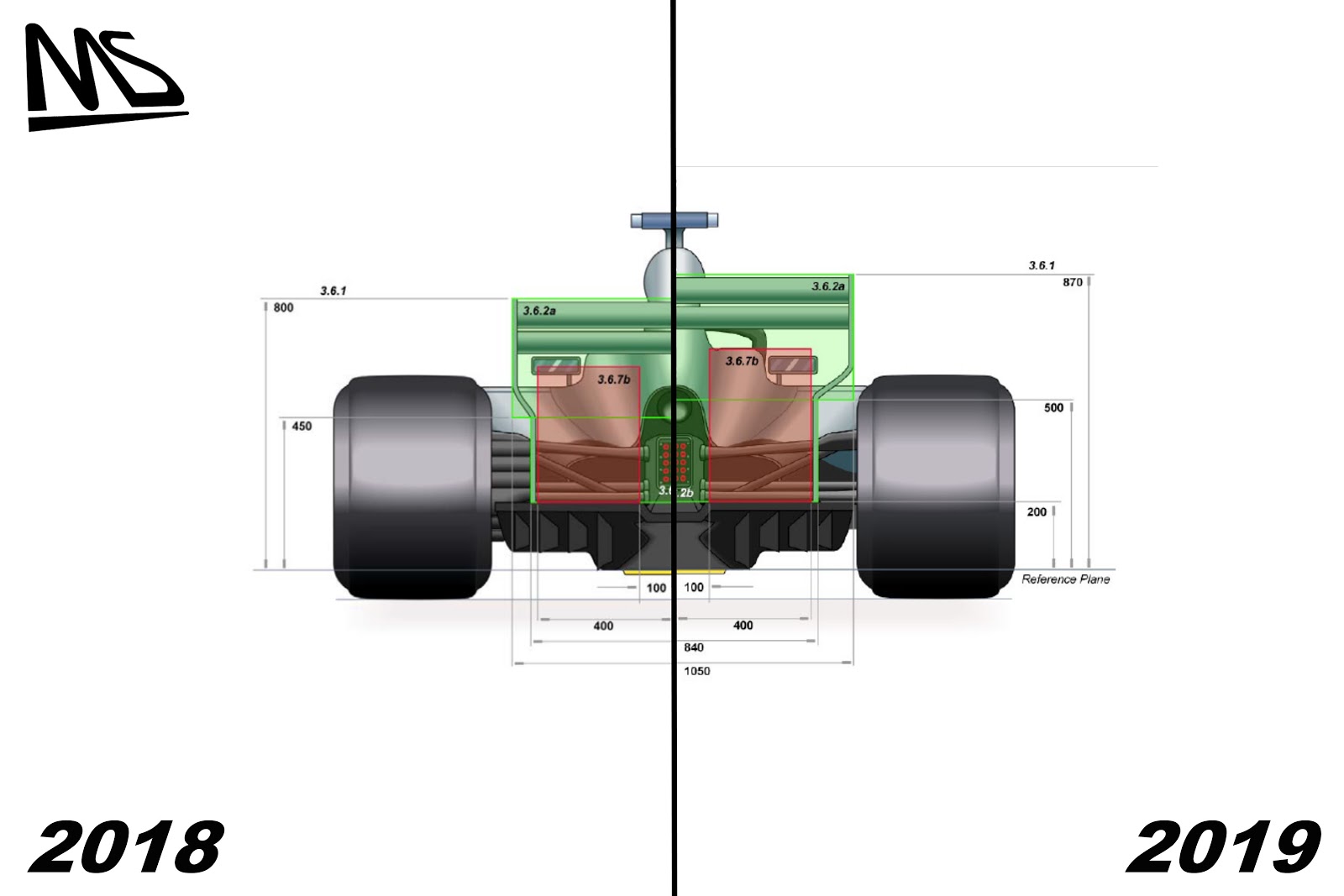 Although almost everyone has obsessed over the impending changes at the front of the car, but I think the changes made to the rear wing could be some of the most beneficial to close quarter racing…
The wings dimensions have been altered, which will see the structure increased by 100mm in width and 70mm in height, whilst the design scope of the endplates has been dramatically curtailed, as louvres have been kicked into touch and the mid strake designs pioneered by McLaren and subsequently copied by Mercedes, Ferrari and Renault are also sent to the sidelines. 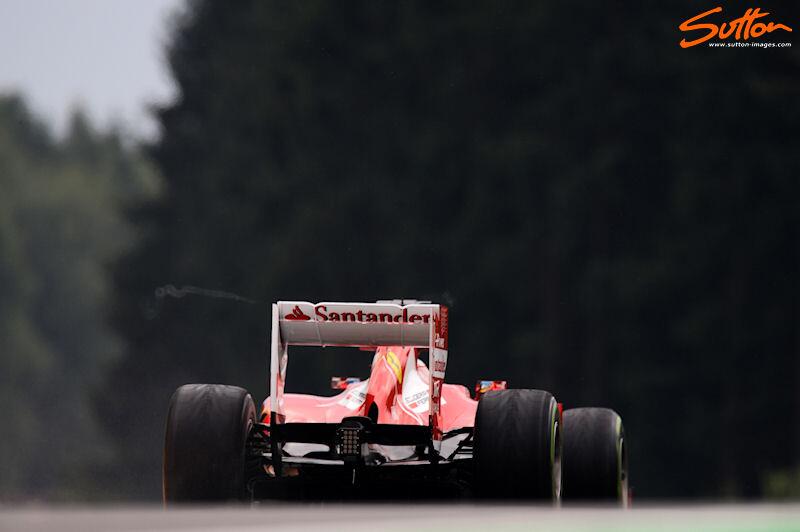 The louvres, if you didn’t know, helped to displace the vortex created at the wings tip juncture, a phenomenon often seen in damp conditions (see above). On the face of it, the loss of the louvres may not see like a big deal but they’ve become quite important, especially when we consider how we’re essentially in an efficiency formula. Without them drag will surely increase, especially if the teams decide to utilise the full scope of the legality box available for the rear wing.

That’s because the wing itself is not only taller, but the size of the legality box has also increased too, up by the same 70mm. This means we should see considerable design variation (at least in the early days) as teams have more room to play with and make decisions about downforce or drag.  These decisions are compounded by the fact that what you decide also has a bearing on the potency of the DRS, so take less wing and you’ll be quicker down the straights, slower in the corners but also limit the scope of your DRS. On the other hand, take more wing and you’ll be slower on the straights, quicker in the corners and have a larger offset when deploying DRS.

Now, when we’ve had these sort of scenarios crop up in the past we’ve had a period where no one solution immediately offers the definitive answer but what I do think we’ll see is a situation where the lower tier teams load on downforce and scrap it out with DRS, whilst the lead teams will look for more efficient designs, such as the spoon style wings we’ve seen them run in the past. However, don’t be surprised if someone bolts on a big wing and suddenly throws themself into the mix and makes everyone think twice about how they deal with things going forward.
So, there we have it, a brief (for me) overview of the changes coming in for 2019, as I said there are others, such as the extra 5KG of fuel they’ll be allowed but I think it was important to just cover the aero changes at this point.