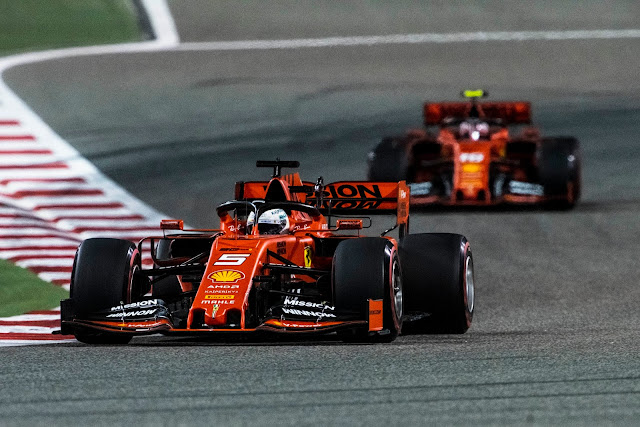 The wind whipped through the paddock as the sky sunk slowly into the inky blackness of twilight with qualifying fast approaching. Inasmuch as Mercedes crushed it at Melbourne, Ferrari seemed to be following suit this weekend in the desert, all hints of last week's ills gone away whilst it was Mercedes' turn to struggle to find the knife edge, the car requiring lots of driver input to get round. Getting the timing right for FP2 proved to be challenging as the best times came in the middle of FP2 with times dropping away as the track temps dipped below 28°C, an issue that will be replicated in Q3....

Renault, HAAS and Macca were meanwhile looking to be the best of the rest, but the advantage still looked to lie with HAAS for the time being, by a tenth or two. The very different conditions from FP3 to quali thanks to the changing temps prompted a different approach from Ferrari and HAAS in FP2, running much closer to quali sims in representative conditions and a departure from their usual procedures. Mercedes made much of this, with Ferrari saying they were running higher engine maps than the competition, but FP3 didn't much different in terms of the gap between the two. Still, the commentariat was fairly unanimous that it would be closer in quali, but historically speaking the gap seemed awfully big for Mercedes to close as the start of the session drew close.....

Green Light!! Albon was first out, followed by Russell and then Kubica who was still suffering from mysteriously less downforce than his teammate at Williams. Kubica was first on it, but he dove back into the pits leaving Albon to set a 1:31.125 with Russell a bit more than a second back of that. Most of the rest were waiting for track temps to hit their optimum for getting the tyres into the sweet spot.

Norris was the next ot join the party around 13 minutes and then the trickle became a flood, with just Red Bull holding out till around the 11 minute mark. He was setting the board alight with purple as he wove through 18 cars all on their outlap. Up to P1 but severely balked into the final turn by Grosjean just setting off on his hotlap.

Bottas was first of the top teams to cross the timing beam in a 1:29.498 but he was immediately eclipsed by Leclerc an entire second quicker!!! Yoicks!!! Hamilton was nearly a half second back of Bottas and it was Vettel, 0.238 seconds back that was closest. Magnussen was just pipped by Sainz for best of the rest, 0.004 seconds between them and as things transpired, it was Grosjean under investigation for blocking Norris.

As the dust settled with 6 minutes left, it was Kvyat, Giovinazzi, Perez, Kubica and Russell on the outside looking in with Stroll on the bubble. Outliers were Gasly in P12, and Hulkenberg in P13 but both Hamilton and Bottas were so far off as to potentially need another run to be safe....

Hamilton took advantage of an empty track to improve to P3 0.7 seconds off Leclerc and P3. Bottas took to the pits and rocked a new set of tyres as the rest of the field, with under 3 minutes left, was back out and onto their outlaps for the final efforts to taste the sweetness of Q2.

Kubica was first off on his hotlap with just a minute left, followed by Kvyat, Norris, Giovinazzi and Raikkonen followed, then Albon Russel and Stroll, whilst Bottas and Verstappen elected to sit tight. The faster Hulk, Rogro, Sainz Gasly and Ricciardo finished up and it was Kvyat to P10 then Norris to P4 with Albon a surprise P6. Stroll squeaked up to P16 and then right out and it was Ricciardo, going P11, sticking the knife in and putting Hulkenberg in P15 out, and ultimately behind Giovinazzi in P17 to boot when all the dust had settled. Another close shave for Gasly, just P14 on 2 runs compared to Verstappen P9 on 1 run and in the midfield both Kmag and Sainz needed but 1 run to secure their progress, meaning an extra set of tyres for them...

Going no further then were Giovinazzi, Hulkenberg, Stroll, Russell and Kubica, though a minor victory for the comeback kid, well, OK middle aged adult, as he was just a tenth of his teammate, a big improvement from Australia. Off from some matchboos they went, whilst the rest reset for the rigors of Q2...

Q2 kicked off with a whole lot of nothing, as teams were still waiting to force others to continue cleaning up the track. Rogro blinked first, leading the parade followed by Mercedes and then pretty much the entire rest of the field with just 12 minutes left on the clock. No sign of alternate tyre strategy from Ferrari which might've been the only team in a position to play that card and the cars rolled around. Bottas chose to pass Grosjean whilst Hamilton went the other directions and kicked off his lap, well behind Kmag and 4 cars further back from his teammate.

The board was full mainly of green but it was Hamilton behind cleaning up the purple sectors ahead of the Ferraris. Vettel and Ricciardo both in the way for Bottas through with a 1:28.83 and P1. Hamilton managed do better by 0.252 seconds and early days it was Kmag P3 and best of the rest by a tenth and a half.

As the second half of the field got into it, Leclerc was looking mighty and through he went, half a second up on Lewis. Verstappen could only split the HAAS pair, behind K-Mag and ahead of Grosjean and then it was Vettel, in with a mystery P6 0.6 back of his teammate, either a mistake or traffic no doubt. Replay showed not only a massive lock up, but a lengthy stint stuck behind Ricciardo as well and there you go. On the outside looking in were Ricciardo, Gasly, Kvyat, Albon, Perez and Giovinazzi, with Gasly suffering the most discomfort in the hot seat at Red Bull. Vettel would be back out to cover, if not actually set an actual time, and it was Grosjean, kicking it all off with 3:45 left in the session. Kmag followed him out and then it was a cast of thousands from the midfield. P9 from Rogro was a far shout from P4 for Kmag so a bit of pressure for the Frenchman.

2 minutes to go and Verstappen rolled out of the pits, 4 back of Vettel and it was new tyres for them, which they would certainly prefer not to lose. Meanwhile, Grosjean seemed to be making just small progress on his first run, into P7. No improvement for Kmag and then it was Kvyat into the pits, it all having gone wrong for him. All eyes to Gasly, who could do no better than P13, 0.48 off Verstappen and it was Vettel, getting it sorted and going P2 0.3s off. Going no further were Ricciardo, Albon, Gasly, Perez and Kvyat. Off they went in search of some arak to ease the sting as the rest reset for the glories of Q3...

Again a whole lotta nothing until nearly a minute, then it was Norris, Frosjean, Kmag, Raikkonen and Sainz. Raikkonen apparently wasn't pleased with Kmag's pace and he was by before T4. 13:30 and it was Bottas and Hamilton out of the gate. Horner was interviewed and was on at length about their struggles to get the Soft tyre into the sweet spot and no doubt they weren't the only team to struggle as track temps had dropped into the upper 20's from the start of the session.

Magnussen was cleaning up purples from Grosjean as he was halfway through S2 and as they crossed it was Grosjean, then Kmag going one better with Sainz slotting in between. Hamilton continued to have the pace over Bottas, but barely and it was Hamilton with 0.145s and a momentary P1, but Leclerc on the charge. Oooooh it was a 1:27.958 and P1 (0.232 seconds ahead of Lewis) with Vettel sat in the pits and only 1 set of fresh tyres to use thanks to his adventures in Q2. Verstappen as well chose to sit out the banker runs and as they teams turned it around for the ultimate tilt at the glories of pole, the tension mounted.

It was Raikkonen who led the charge for the final runs, with Vettel kicking off the sharp end with his only venture, trailed by the Mercedes duo.

Raikkonen, Norris, Grosjean were off and they were lighting up the board green. Behind, Vettel was chunking up the purples but still just off Leclerc's time halfway through. Behind, it was Leclerc just eclipsing Vettel though, taking S1 massively as Vettel could do no better than P2. It was a battle between the Mercedes and Bottas could not topple Hamilton's previous time whilst Hamilton himself could do no more and it was only Leclerc, improving to a 1:27.866 who showed any improvement and that by nary a tenth as the track temps had dropped below 28°C.

Gonna be quite the race tomorrow, with the start key for Vettel and his WDC drive and with Hamilton in P3 it could be quite shouty through the first few turns. On race pace, Ferrari looked to have a small advantage, but the tires will very much dictate strategy as at the start of the race it will be degradation limited, but for the pit stops it's very much down to drivers being able to get the tire into the sweet, given the track temps will be dropping throughout the race. Kmag finished P6, best of the rest and an unbelievable 0.005 seconds off of Verstappen. Which, given Red Bull's struggles with getting the Soft tyre into the window isn't that much of a surprise, but if they don't crack that nut HAAS and Magnussen, not the easiest person to pass, let's be honest, are decidedly in a position to make Max's life even more challenging.

McLaren have a lot to be happy about as well, and with Sainz and Norris starting in points paying position it's Renault with the most work to do. Look to Ricciardo/Hulkenberg to split tyre strategy as Ricciardo seemed to have a good start in Melbourne (too good one might say) and making up a few places will chuck him right into the midst of the fight while further back. Again, long running midfielders might create unexpected opportunities but with 3 DRS zones it's less likely that the field will flip due to someone nursing tyres to a ridiculous degree.

Best of all, it's looking a much more like a proper fight for the championship than it was 2 weeks ago, which is good news for the whole sport. For tomorrow, though, very much looking like Ferrari's to lose and Mercedes to steal and everyone is waiting to see how Leclerc does with the pressure of his first F1 pole...