Max Verstappen stormed to victory in what can only be described as an antidote to Formula One’s recent ills, but did it raise more questions than it answered? As the Dutchman made inexplicably easy work of drivers that up until now had dominated the field. So, what was so different about Austria that it changed the game?

Firstly, I don’t want to take anything away from the performance of Verstappen, Red Bull or Honda but there are some things about how this perfect storm all unfolded that I'd like to cover.

The catalyst
Having already outperformed both Mercedes drivers in qualifying, the you Dutchman found himself on the front row alongside another future star - Charles LeClerc. The alone had all the makings of a mouthwatering encounter, but alas, it wasn’t meant to be, as Verstappen had a problem off the line, bogged down, went into anti-stall and lost five places as he finally got underway and headed to turn 1. Race over? No, far from it, this only galvanised the Red Bull drivers resolve and with the bit between his teeth he began to dissect the field.

The first complaint we heard from Verstappen was in regard to clipping, which relates to the energy mode that the driver is employing. Clipping is when the driver feels as if he’s running out of energy at certain points on the track, which is either caused by a lack of recovery or by running in a mode that’s using too much energy earlier in the lap, requiring an element of catchup throughout the rest of the lap. To deal with this issue the team will have instructed him to make some changes on the steering wheel, which alters the deployment of energy and makes things more sustainable for the entirety of a lap.

Settling in
At this point, chasing Vettel, who’d had a great start to the race, the pattern of the race began to emerge, as all the drivers began to settle into their rhythm and drove to the desired lap time delta. (This laptime delta is a target time the driver must try to stay within, lap after lap, and whilst it’s not the fastest lap that the driver can actually do at that point in time, it should enable them to extend their stint if necessary and also accrue enough fuel for a push when necessary).

With both Ferrari’s on the soft tyre there was a clear expectation that they’d stop first and both the Mercedes and Verstappen who were on the medium tyre would go that bit further into the race, giving us a variance on the strategy. However, this was not the case, Bottas jumped the gun on lap 21 and started the domino effect, switching to the hard tyre and would begin the long and tiresome voyage of a one stop strategy.

Behind him on the track Vettel was able to react and pitted on the same lap, meaning the Finn was held in his pitbox for longer as the German passed him into his own. However, such was the late call for Vettel’s stop that not all the hard tyres he wanted were ready in the pitlane and his stop took 6.5 seconds.

Meanwhile, only a lap later LeClerc headed in for a set of hard tyres too, meaning all three drivers had given up the opportunity to fully exploit the last bit of performance that their tyres had. 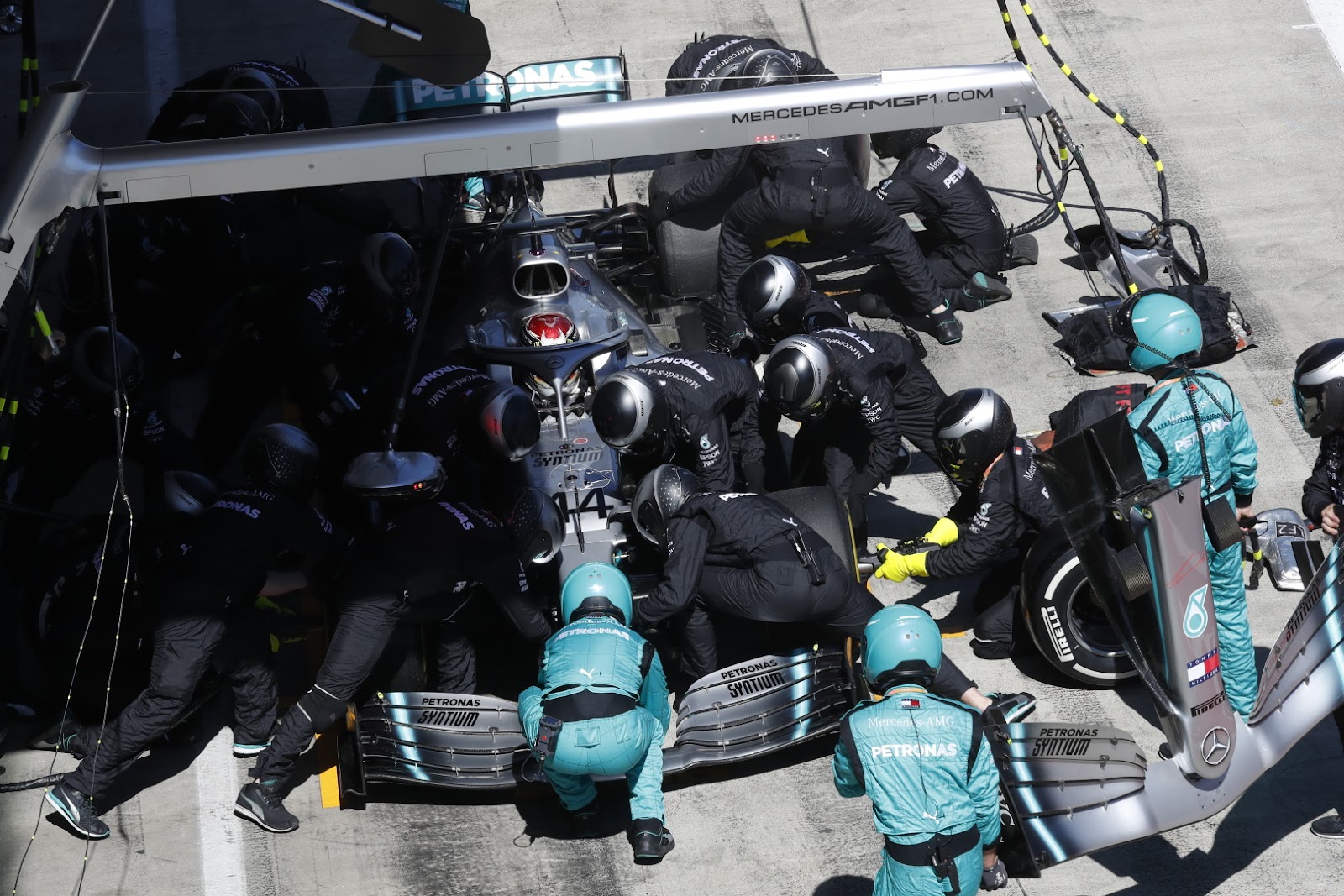 Hamilton, now leading and in free air, persevered for another 9 laps, exploiting more of the life and performance that the tyres had to offer but in doing so damaged his front wing on a kerb on lap 27, which resulted in the installation of a new one at his stop and a stationary time of 11 seconds, resulting in him being dropped behind Vettel.

Seizing on this opportunity, even though his laptime delta was still stable in the low to mid 1:09’s, Verstappen pitted for the hard tyre. As he emerged from the pitlane he was 13.5 seconds off the lead - a lifetime, that any other circuit and on any other day would have seemed an impossibility. But, as he exited his pace on the hard tyre was actually better, pulling high 1:08’s in the early phase of his stint and reeling in tenths on the leaders ahead of him, as in free air he didn’t have to overly concern himself about powerunit temperatures.

Cooling off period
Talking of temperatures, perhaps this is as good as time as any for an interlude… Mercedes had a torrid weekend relative to the dominant performances we’ve seen from them so far this year, all of which boil down to their ineffective cooling solutions.

At around 700m above sea level and with such high temperatures the Austrian GP became somewhat of a challenge for all involved but, Mercedes seemed to suffer more than the others, which caused a cascade of other performance issues.

Even though the silver arrows had deployed their maximum sidepod cooling solution they were a little less cautious at the rear of the car, with the blisters wrapping around the internal component highlighting they’d chosen a skin tight engine cover. On top of this they’d opted for a relatively small cooling outlet too, improving aerodynamic efficiency but making heat evacuation more difficult. Lest we forget that in the preceding few seasons Mercedes have opted for the opening in the spine of their engine cover to assist in heat rejection. 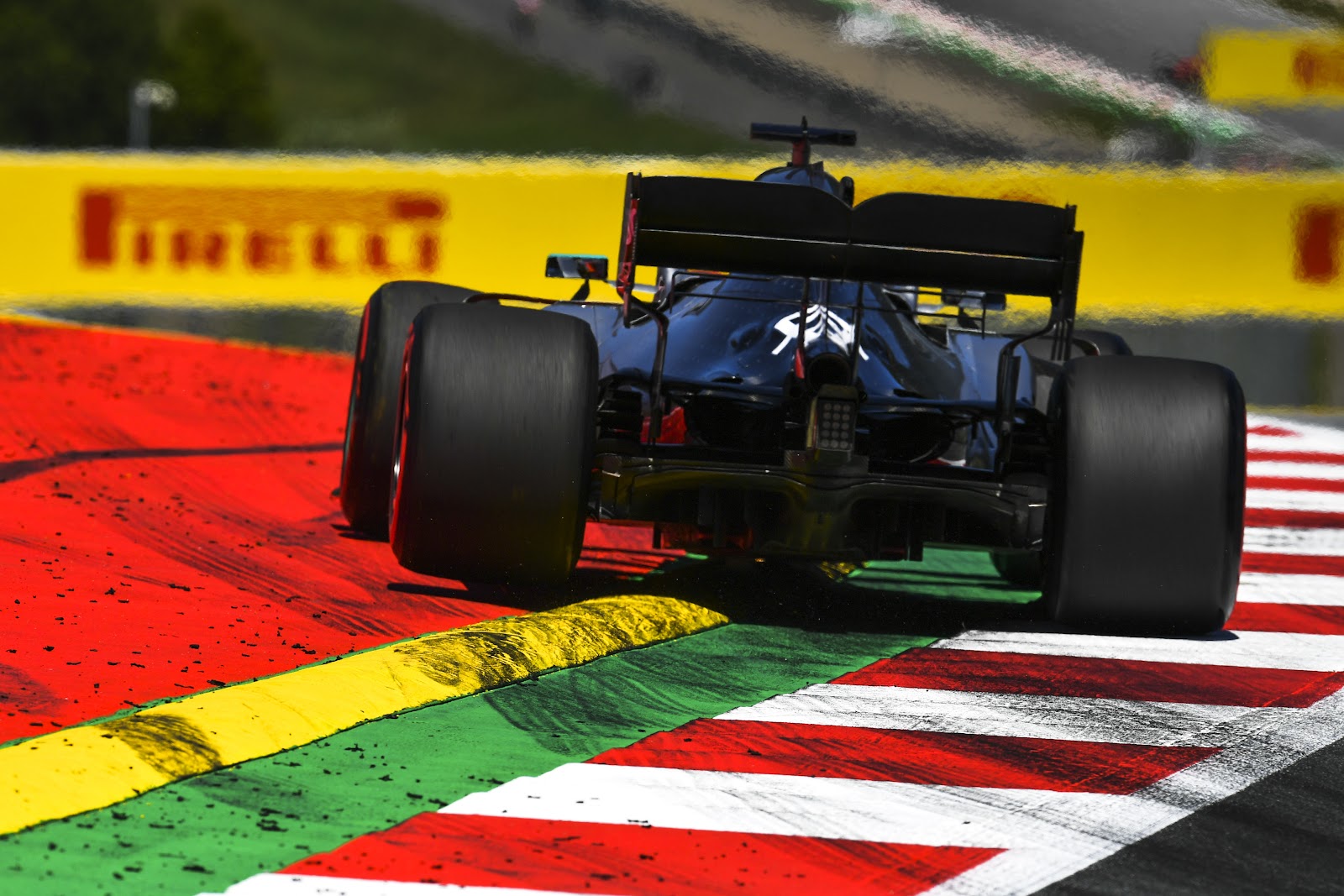 These overheating issues became even more problematic for the drivers during the race as they were unable to use the engine modes that would ordinarily allow them to attack or defend positions, resulting in some hefty lift and coast too. These issues also resulted in the teams usual good work with the tyres being destroyed, as they simply weren't putting the amount of energy through them they’d like.

It’s also unclear how the recent raft of technical directives issued ahead of France have affected individual teams in the short, medium and long term, perhaps with some having an immediate effect on performance under certain conditions.

Red Bull have been pushing relatively hard in recent races when it comes to updates too, having furnished the RB15 with new nose horns, a new front upright/brake assembly and wheel combo which pushes much more airflow through the assembly, a new diffuser, and a new wastegate layout and engine cover package.

Final stint
The stint that followed Verstappen’s pitstop was a stalking masterclass, as he and the team positioned themselves perfectly to take the fight to LeClerc in the final stages. As I’ve already mentioned the early part of this stint saw him slowly chipping away at those ahead of him but, things really started to take off around lap 55 when he posted his first time in the 1:07’s, with another 9 laps dipping in there during a 16 lap push. Meanwhile, LeClerc was simply unable to respond, even if he’d been given a warning. The Monegasque driver dipped into the 1:07’s just once, on lap 58, before settling back into a low to mid 1:08 rhythm - this then was Ferrari’s pace on the day.

Unsung hero award
Whilst the leaders of the pack switched from either soft or medium to the hard tyre to complete a one stop race, Lando Norris wowed me with not only his general racecraft throughout but also his cheeky Soft to Medium one stop strategy, proving that although not as fast as the front runners it was a strategy that could see him win the battle of Formula-B.

GP2 engine, GP2 engine…
Ah, the immortal words of Fernando Alonso, lambasting the blood, sweat and tears piled into the Honda powerunit programme only a few years ago has come back to bite McLaren on the arse. Red Bull have worked in unison with the Japanese manufacturer and delivered where McLaren could not and whilst there’s still time for acrimony to brew, just as it did with Renault, the results since the pair have joined forces have been nothing short of astounding. It could and probably should be argued that Honda have toppled Renault in that short time and are now hunting down Mercedes and Ferrari, a feat I no longer see as powered by dreams, but reality.
Of course, there is a long road ahead, they took their opportunity today when others were unable to perform but on their day they clearly have what it takes and hopefully they can use the lessons from this victory to empower them going forward.

Max-imum effort
All-in-all, the drive from Verstappen on Sunday was sublime and just underlines the fact that Red Bull were right to put their faith in the youngster and that Formula One itself is in good hands when the time is right. However, what we should be cautious of is thinking that one race has suddenly changed the baked in nature of the sport right now. Formula One isn't broken by any stretch and certainly not by the margins that people were suggesting after the French GP but it also has a long way to go, although for me the direction we're heading in for 2021 might not be the answer either.

Don't forget that my weekly column usually features over on my patreon page where you can support my work for as little as $1 per month - www.patreon.com/somersf1
Tagged
Newer Post Older Post