As Formula One gets ready to take a break, it's fair to say that the last four races have delivered captivating drama and perhaps some of the best action we’ve seen in years. Every single one of those four races has delivered something a little bit different but each just as rewarding as the last, whether you’re new to the sport or having followed along for years.

As far as the Hungarian GP goes I think there will undoubtedly be those that look at Mercedes strategy to stop Hamilton on lap 48 as just another gamble - a roll of the dice if you will. But, I think there’s plenty more to it than that, rather I see it as a bold but educated strategic call that goes to show how relentless the silver arrows are in their pursuit of the top step. 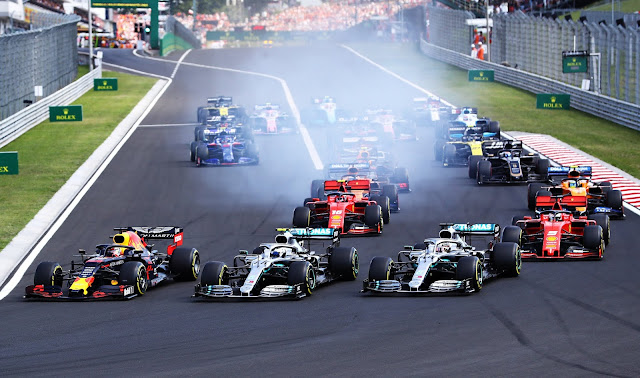 The opening phase of the Grand Prix was usual cat and mouse fare, with both drivers fully aware that the Ferrari drivers were dangling precariously in their pit window (ie, if they were to stop they would come out in very close proximity to the Scuderia’s drivers, which could be damaging to their pace). This forced Verstappen; and by extension Hamilton, to hold station, drive to a delta and try and extend their first stint without losing too much time.

The problem for Verstappen and Red Bull is that Hamilton was making the timing of their pitstop even more difficult, as being in such close proximity, the undercut was certainly a weapon in his and Mercedes arsenal. Hamilton was also keeping up the pressure out on track too, as the Brit tried to close the gap to the point where he’d have DRS available, but it was obvious both brake and powerunit cooling might scupper his charge as he got within that 1 second window.

At the end of lap 22 things ramped up a notch further, as Mercedes looked to pull the trigger on a stop, only for the crew to go out into the box and then slink away sheepishly as Hamilton rounded the last corner. It’s unclear if this was a tactical decision by Mercedes to throw a dummy and try and force Red Bull into an early stop or whether Hamilton overruled the teams decision by not boxing.

Either way it was clear that at this stage in the race the W10 was the faster package and that if Red Bull and Verstappen continued to extend the stint they could fall back into Hamilton’s grasp on track, let alone through the pitstop phase. Traffic was also beginning to plague them, as Hamilton made better progress through the lapped cars, with drivers suddenly aware that the leaders were coming through, after Verstappen had took the pain. Verstappen’s radio was also alive, as he expressed his displeasure at the teams seeming disinterest that he was suffering from a loss of grip.

Their pace was still good relative to the rest of the field though, albeit lessening lap by lap as the tyres wore and so the team continued to monitor the gap to both Ferrari’s behind, waiting for the window to emerge whereby they could pit for fresh tyres and still come out ahead of them. The moment finally arrived for Verstappen at the end of lap 24, with his crew able to service the car with a set of hard tyres in just 2.6 seconds, which got him out clear of Charles Leclerc and essentially with a pitstop in hand - just going to show the pace deficit that Ferrari had around the Hungaroring.

Bono was straight on the phone to Hamilton to tell him it was HAMmertime, to which most people probably expected a blistering laptime and a stop the next time around. Still happy on the medium tyres but not setting the timing sheets alight it would now mean that Hamilton would have to extend his stint in the hopes that his fresh rubber would see him come good at the end of the race.

Meanwhile, Verstappen was using the fresher tyres to his advantage and actually chipping away at Hamilton’s lead and it became obvious that Hamilton would now have to pass Verstappen on track if he were to take his seventh victory in Hungary. The pitstop itself, which came at the end of lap 31, didn’t help matters, as a sticky front-right resulted in a 4 second stationary time and meant he’d already shipped 1.4 seconds to Verstappen, not even taking into account the laptime loss in the intervening laps. 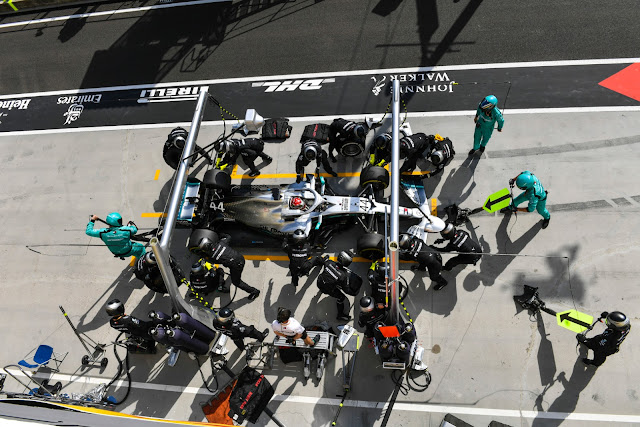 As Hamilton exited the pitlane the timing board suggested he was now 5.859 seconds behind his rival, a time that stretched out to around 6.5 seconds in the mini loops, as he tried to fire up the hard tyre and reapply the pressure on Verstappen. And boy did he, as he absolutely lit the timing boards up in the next few laps, catching Verstappen and Red Bull napping.

It’s amazing to think that in just four laps he was within half a second of the Dutchman and would now try to use his tyre life advantage to full effect and think about a management phase later in the race. As they crossed the line to start lap 36 it was game on, with Hamilton all over the RB15’s gearbox out of turn one, but he went too deep in turn two and lost some time to Verstappen, who’d now clearly stepped up his pace to try and match Hamilton.

Catching Perez toward the end of lap 37 was Verstappen’s worst nightmare, as the Mexican couldn’t just jump out of the way, as he had nowhere to go. As both drivers went down the straight with DRS and every toy likely being deployed it became obvious that the Mercedes still owns an overspeed over the Honda powered Red Bull and as they rounded turn one, Hamilton was stalking his prey once more.

At the end of lap 38 a similar scenario began to unfold only this time Verstappen was a little more distant from his former teammate - Daniel Ricciardo, as they rounded the last corner and so he had to rely on a more distant tow, DRS down the straight and a rugged defence into turn 1. Hamilton went for a cut back on the run down to turn two and another switch back out of there to get better traction on the short squirt up to turn four. Hamilton, aware of Verstappen on the inside, took a deep line on the outside and ran wide, picking up dust, marbles and debris and effectively nullifying his challenge at this stage in the race.

This pegged Hamilton back, as his tyres now featured cold spots from his adventure on the edge of the track and meant he’d have to spend time reconditioning them and recover the laptime necessary to get back into the DRS window. At the same time his team had become concerned about powerunit and brake temperatures, both of which had climbed as he fought to gain the position and he was asked to do some lifting and coasting to help manage the situation.

A comfortable gap had grown between Hamilton and Leclerc behind (33 seconds) and so both he and Verstappen now had a pitstop in hand. The times now in a see-saw between the two meant that only a mistake under current conditions from Verstappen would see Hamilton victorious and so the silver arrows played their trump card…

On lap 46 they called Bottas into the pits and outfitted him with a fresh set of medium tyres - the Finn’s car then effectively became a moving strategic laboratory, as someone within the team had clearly noticed an angle they could work in order to help Hamilton in the latter phases of the race. That angle revolved around the behaviour of his car in the opening phases of his second stint and with confirmation from the data seen on Bottas’ car that their projections would line up, they pulled the trigger with Hamilton.

At the end of lap 48, with 21 laps to go and teetering around 21 seconds to the leader, the chase was on. Hamilton’s closing speed on the outlap also ruled out a stop for Verstappen, as he’d simply have been undercut by the now faster lapping Mercedes. This left Red Bull with just two choices - an overcut and hope they could beat Hamilton in a wheel-to-wheel battle, with them becoming the chaser or cross their fingers that the tyres hung on and Hamilton’s charge faded. 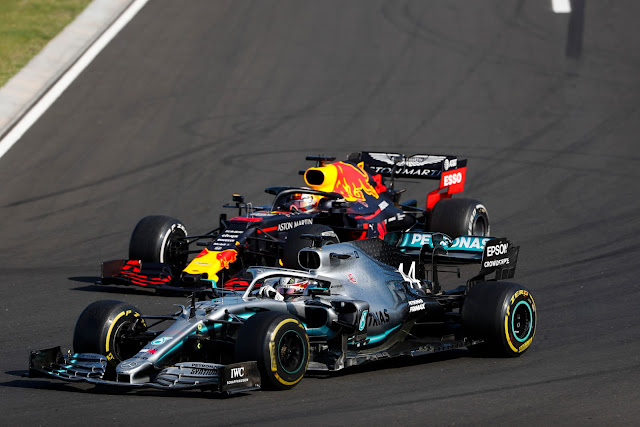 Of course we know what happened and it would be easy to say that Mercedes only made the decision they did because Ferrari’s pace was weak enough to mean they had a stop in hand but, I firmly believe they actually intended to be aggressive and go after the race win.

The first few laps of Hamilton’s second stint were critical in this decision, as the correlation between a reduction in brake temperatures and subsequently wear came about due to the added retardation that comes from running on fresher rubber. Effectively the grip that’s being generated will slow the car more effectively, meaning you can lean on this to reduce the load on the brakes.

It’s something that was fairly visible in the closing stages, as the dense brake cloud that had previously been ejected from the W10’s front wheel rim was now lessened, suggesting that temperatures had plateaued.

The other advantage to this strategy call is that whilst Hamilton could lap much quicker on the newer tyre, Verstappen was trying to manage the life of his tyre and effectively backing himself into Hamilton. The task at hand was made a little more difficult still for Verstappen, due to the thinner gauge tread used by Pirelli this year, as there’s less surface area on the tyre to retain heat, especially at the end of the tyres life when staying in the operating window is even more critical.

The tactical and strategic intrigue was what defined this particular race, as it became a 'will he or won’t he?' battle amongst two of the sports brightest lights. With somewhat of a wait til the next chapter in this season long war, we must now look at Red Bull - Honda and appreciate how far they've come in a very short space of time and how there is a distant chance that Max can take the fight to Lewis for this years title. Meanwhile, there's the possibility that Ferrari will have a hand in that fight, as it's likely they'll have somewhat of a renaissance in the coming races, given those circuits may suit their lower drag philosophy.

I for one cannot wait for the Belgian GP, especially as I’ll be there, cheering them all on from the sidelines...

If you enjoyed this article then it might be worth noting that it was posted over on my Patreon page first - Patrons get access to my content a little ahead of time for as little as $1 per month.
Tagged
Newer Post Older Post