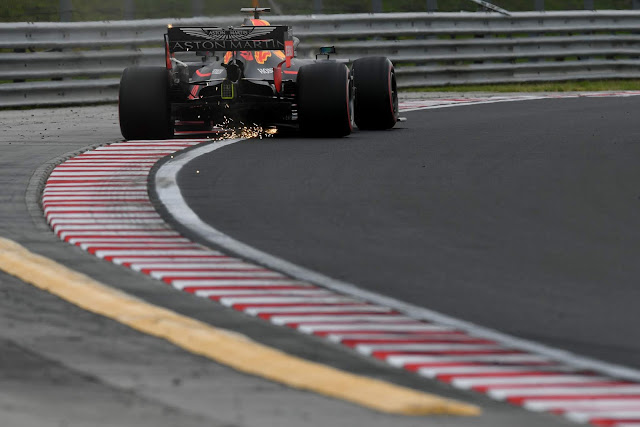 Massive clouds scudded through the blue dome of sky enclosing the paddock at the Hungarian Grand Prix, the unsettled weather contributing healthily to the uncertainty around a track where overtaking is normally in short supply.

With a rain shortened FP2 spoiling many a team's long runs, and a healthy dose of oil on the track from the entry of T4 to the exit of T5 thanks to an exploding F2 engine, firm conlusions were in short supply, even with Hamilton leading the way to the qualifying session, albeit by just a hundredth over Verstappen in the Red Bull. Mercedes were generally quickest in the third sector, Ferrari in the first, and the second sector, with what appeared to be about half a ton of cement dust to soak up the oil at T4, simply kept getting faster and faster throughout the session.

Vettel was third behind Verstappen at the end of FP3, with the trio at the top covered by an unusually small tenth of a second. Normally that's a formula for Hamilton to dominate, but given the fact that the form of the Red Bull has yet to settle, and the more salient fact that the temperature actually dropped 10C throughout the session it was harder then normal to get a sense of who might have the ultimate advantage. Bottas was perhaps the biggest loser, as he missed all of FP1 with an engine swap and then only managed 18 laps in FP2 and as a result he was nearly 0.3 seconds back of Hamilton. For Ferrari the trick would be managing the tyres as keeping them alive for the third sector looked to be there limiting factor whilst for Mercedes limiting the loss in sector one was going to be critical such was the advantage Ferrari had in the less twisty bits...

Norris was best of Formula B, trailed by Raikkonen and Sainz, but fantastically he was nearly half a second clear of the entire rest of the midfield. Kmag and Grosjean continued to run the dual spec experiment, with Kmag generally about a tenth up on his teammate but the pair of them rocking up in the top 10 fairly consistently. But as always at this circuit, traffic was likely to play a big role in who made it into Q3.......

Green Light!! Stroll was out first on the soft tyre followed by Russell and Kubica, who were running much closer to the back of the pack than usual.

15 minutes to go and Stroll was off on his first go, halfway through and looking good, but Russell was looking better and then he was through, half a second faster than the Racing Point with Kubica 0.15 seconds back of the Canadian.

While the battle for the back unfolded, Macca, Toro Rosso, Alfa Romeo and Ferrari all rolled onto the circuit for their outlaps. As much of the meat of the midfield rocked across the line, it was Raikkonen to the top, followed by Sainz, Kvyat, Albon and Giovinazzi, just 0.2 seconds ahead of Russell.

It was the turn of the Ferrari's next, and Leclerc took the top spot, as Vettel had more than a few slow car's to get round. 10 minutes to go and it was the turn of Mercedes, with Bottas a bit faster than Hamilton and even with a lurid drift out of the last turn, Bottas was 0.2 seconds up on Hamilton as Verstappen, was seriously on it. Round went the Red Bull, and with a purple third sector he was to the top with a 1:15.871, half a second up on the Ferrari's.

Leclerc, on a second go lost the car into the final turn, doing half a spin and was into the wall, rear wing first smashing it rather thoroughly and creating a lovely and expensive shower of carbon fibre. As he limped back to the pits, Bottas took P2 as the speculation about whether he could make Q2 ramped up as damage to the rear crash structure was obvious and the suspension looked to have taken a fairly bad knock.

3 minutes to go and it was Grosjean, P19 out on the track... Grosjean, running on a contra strategy and empty track, jumped up to P8 and as the rest of the midfield circulated back onto the track it was Albon, Kvyat, Giovinazzi, Stroll and Kubica with it all to play for with Russell P15.

Russell led the way followed by Albon and it was P13 for Russel and then P8 for Albon. No improvement for Stroll and with both Raikkonen and Giovinazzi quicker than Russell put him into difficulty. Ricciardo and Perez were unable to do anything and then it was just down to Hulkenberg, who went P12 and finally put Russell out, but he was quickest of the battle for the back and that was indeed a big step for Williams.

So Kubica, Stroll, Ricciardo, Perez and Russell were going no further, off in search of some kolachi, save Russell who was clearly going to be banging down some champers in the Williams garage. On replay it emerged that Ricciardo had lost a high stakes bet trying to go round the outside of Perez in the last turn. Perez shut him down and that was the end of his chances.... That left just the mechanics in the Ferrari garage working feverishly to get Leclerc turned around for the second session.

Q2 opened with Mercedes on, total surprise, the Medium tyre. Gasly and Verstappen were out next, similarly shod and then it was the turn of Ferrari, Vettel leading Leclerc. Bottas was first off with 13 minutes left in the session. Sector 1 to Bottas, Sector 2 to Hamilton and Sector 3 to Hamilton and the early lead, though Leclerc had already surpassed that as he was into Sector 2 on his effort. But first it was Verstappen, splitting the Mercs and just 0.025 off Hamilton's 1:15.548. Both Ferrari's wound up slower than Bottas, a quarter second off and Leclerc ahead of Vettel.

9 minutes to go and it was Hulkenberg, Sainz and Albon in Formula B with the rest on their hotlaps. Kvyat was first through and P11, and then Norris, 0.3 seconds up on Gasly went P6 and both Giovinazzi and Raikkonen P12 and P13, with Grosjean and Magnussen just starting their efforts and 7 minutes to go. Grosjean rocked up to P8 and then Magnussen was only able to go P14 and apparently had some difficulty given the distance to his teammate.

Gasly wasn't able to improve and Magnussen admitted to having just no grip on that particular set of tyres as the mysterious HAAS continued to befuddle its builders... Albon, Kvyat, Giovinazzi Magnussen and Raikkonen on the outside looking in as the track emptied and preparations were made for the final push to make Q3.

2:30 and Norris was first to hit the track, followed by Grosjean and Sainz. Albon, Giovinazzi and Raikkonen were next, with Giovinazzi set to be penalised for impeding Stroll in Q1. Kvyat was next and then it was Magnussen, last out of the gate and mixed up with the sharp end who were out just to cover any potential track evolution.

Norris backed off and it was Grosjean, next up. P7 for him, ahead of Gasly with Sainz immediately topping him. Hulkenberg for P10 then and then Raikkonen sent him out. No improvement for Giovinazzi nor Magnussen and that was that. Hulkenberg, Albon, Kvyat, Giovinazzi and Magnussen were done for the day and off to find some Palinka and drown their sorrows while the rest turned it around for the glories of the final qualifying session.

Q3 started with Hamilton, Raikkonen and Bottas, followed by Sainz and Norris. Gasly trailed out a bit behind and as he rolled through T3 Verstappen emerged from the end of the pitlane. Vettel and Leclerc were next up with Grosjean last out of the gate.

Hamilton was very clearly going for it, kicking up dust as he charged around the circuit and rocking up the early purple and going 1:15.146 but it was Bottas a bit ahead, 0.01 seconds ahead of his teammate across the line as Verstappen rocked in a fastest S2 and all eyes headed his direction. He couldn't quite purple the third sector but with his balanced effort he was into the 1:14's and to the top, provisional pole with 8 minutes to go in the session. Neither Ferrari could get close and as the dust settled it was Verstappen, Bottas, and Hamilton, who'd had a tiny mistake with about 0.2 seconds to makeup, and then it was double that to the Ferrari's with Gasly well off in P6. But at least it was P6.

Norris led Formula B, followed by Sainz, Raikkonen and Grosjean as the track emptied and the teams prepared for their last shot at the hallowed grounds of pole position.

And it was Grosjean, first off the mark with 2:30 left on the clock, then Norris and Raikkonen. Sainz was next up, then Gasly trailed by Leclerc. Verstappen led Bottas and Hamilton and it was Vettel, last up to set a time in the final runs.

Norris was just a skosh off his first run into the first sector, dead even in S2 and then across the line staying P7. Leclerc was up early days, into S1 but behind Vettel eclipsed him. Verstappen briefly claimed S2 before Bottas claimed it. Leclerc was across, still P4 and then it was Bottas, rocking up on Verstappen's time. But it was S3 that was definitive and as Max improved his time to 1:14.572 Bottas fell just short with a 1:14.590, just 0.018 seconds off. Hamilton was next up but he was a tenth back and that just left Vettel who was nowhere in the neighborhood and thus Red Bull claimed it's first pole position of the season. Coming the week after a double podium for Honda it was firm statement that they were now in the thick of it.

Tomorrow's race sets up nicely but the biggest challenge now for Red Bull will be the start, where they have looked less than stellar in their last few outings. Despite finishing P2, the advantage might go to Hamilton as he starts on the higher grip side of the track and with a good look into the first turn from the outside. Further back, it was Norris beating Sainz and then Grosjean ahead of Raikkonen setting the top of the pyramid in Formula B. With no rain predicted it's very much going to be down to managing the tyres and that's where the lack of FP2 running is likely to rear it's head and hopefully provide some fireworks.... But there will be a lot of celebration first at Williams as it appears they have finally caught up to the back of the midfield and made the long turn for home.
Discuss!!