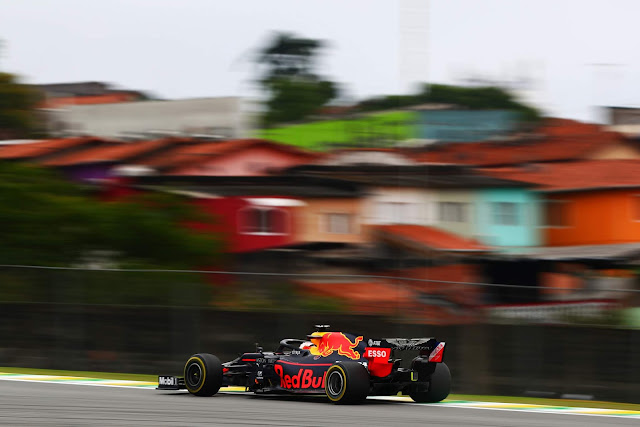 The rain that plagued the first day of practice stayed away overnight, but it was a grey and cloud filled sky that loomed over the paddock as the last, intense burst of action on the garages prefaced the brutal session that was about to commence.

At Mercedes, Hamilton's car was receiving all sorts of attention after he last reported a sudden power loss and returned quickly to the pits, holding all the cards it must be said, fastest in all 3 sectors and at the top of the timing sheets.

Verstappen's car, too, was having some adjustments made and somewhat entertainingly, the new front wing that Red Bull brought was being quite difficult to install, which wasn't doing anything to make Horner less grumpy. How grumpy, one might ask? Grumpy enough that the twittersphere was alight with rumours that Red Bull and Mercedes might well file a formal protest against Ferrari, after poring over the GPS data, courtesy of AMuS, naturlich. And that's even before you mention Albon's crash to him.

At Ferrari, they were certainly behind in terms of time, potential protests notwithstanding, several tenths down after FP3 and with Leclerc looking at a 10 spot ding for needing a new ICE at a track at which they have historically been less than stellar.

Also of interest will be whether Mercedes persists with it's remarkable tyre prep regimen, which saw them treating Bottas' rear tyres to being cooled and Hamilton's front hubs being cooled. Never a dull moment...

Green Light!! Kubica led the way for Williams, his ignominious crash in FP2 putting him far, far behind his teammate, who was next off, as he basically missed both Free Practice sessions, having given over the car to Latifi for the first session. Giovinazzi and Raikkonen were next out, then Kvyat.

As they completed their runs it was Kvyat briefly at the top, before he was then eclipsed by Gasly. Giovinazzi was next, then Raikkonen and Russell. By this point, most of the rest of the midfield was out along with the Ferraris.

To the surprise of no one, Ferrari littered the board with green and purple and to the top Vettel went, with Leclerc just 0.036 seconds behind. Lest you think that was fast, Albon, who had snuck out while I was playing with some new features on the F1 app, rocked up to the top of the sheets.

Bad news for Sainz, who radioed in something went on his engine as Verstappen was on his hot lap, a neat effort given the traffic he had, that saw him 0.261 seconds ahead of Albon with a 1:08.242. 5th and 6th for Mercedes as Sainz followed up with the thought that perhaps it was the driveshaft....

7 minutes left and Magnussen took over best of the rest as Hamilton suggested that a single lap cooldown was not sufficient for another go. Leclerc was off for another bite at the apple and a personal best for S1, before dropping a load of time in the second sector. Both Mercedes stayed out and it was Bottas, able to improve enough to clear Vettel at least, as Leclerc's time had taken him up to P2.

As the track cleared and everyone reset, it was Hulkenberg, Stroll, Russell, Kubica and the stricken Sainz on the outside looking in, as the field turned it around for their last chance at reaching the rigours of Q2.

Kvyat and Gasly took advantage of the lonely track to have a go, and it was P8 Gasly and P12 Kvyat as the rest took to the track to work it out.

P10 for Hulkenberg, then, ahead of Ricciardo. Perez, who had been dropped to P16, rocked up to P13, which quickly became P14 as Giovinazzi pipped him and then P15 in the hotseat, when Raikkonen, too, went faster. This left just Stroll to knock his teammate out, but it wasn't close and that's the way the session ended. Kvyat, Stroll, Kubica and the unlucky Sainz, off to look for some pao de queijo to soothe their wounded egos as the rest turned it round.

Q2 started with a whole lot of nothing, Mercedes definitely doing their mega tyre prep as they waited in the garage, blowing cold air through the front hubs with the blankets off as had first been spotted in FP3 by Sky. At long last, with 11:30 left, off went the Mercedes on the Softs, Hamilton leading Bottas and then Hulkenberg. After a respectable interval, the midfield popped out, causing some timing issues for the Mercedes, Perez leading the gaggle onto the track.

10:47 and off went Hamilton, taking honours just barely in Sector 1, then a bit of traffic in Sector 2 not slowing him at all. Across the line and 2 tenths up on Bottas as Verstappen was the next of the big hitters on a lap. Grosjean, Magnussen and Raikkonen best of the rest and then Leclerc, on the Medium tyre (thanks to his impending midfield start due to his penalty), edged Hamilton by a proper 2 tenths then Verstappen on the Softs rocked up to the top with a 1:07.503, 0.385 seconds up on Leclerc. Vettel on the Softs was slightly behind Leclerc, because nothing about this qualifying was going to make sense and it was Norris, Ricciardo, Giovinazzi, Perez and Hulkenberg on the outside looking in. And it has to be mentioned, with a potential power loss issue from FP3 unresolved publicly, the possibility that Mercedes was running with it's PU turned down to prevent a reliability issue......

Regardless of anyone's speculation, 2 minutes to go and the track was full, with Raikkonen on the hotseat and the midfield being anyone's game. Perez led the way onto the hotlaps, the last chance for the glories of Q3 wafting in the air. No real improvement for Perez as he entered the final sector and then a brief P14 and then right back to P15. Giovinazzi rolled a double yellow into T7 that pretty much ended the lap of everyone behind him, which, as happens, ensured that his teammate would go through to Q3...

Going no further were Norris, Ricciardo, Giovinazzi, Hulkenberg, and Perez, off in search of some caipirinhas to drown their sorrows. A bit of Sky punditry in search of the answer to whether or not Ferrari have lost their straight line advantage confirmed they were marginally faster up the hill to the line, relative to Mercedes but perhaps of more import was the fact that the track temps had dropped to 31.7°...

As the hallowed grounds of Q3 beckoned it was Raikkonen, Gasly and Grosjean first to dip their toes into the pool, with around 9 minutes left in the session. Vettel, Leclerc, Albon and Verstappen were the tail enders, with Hamilton leading Bottas out just in front of the back of the bus. Off they went, and it was Grosjean fastest of the trio of midfielders as the sharp end settled down to their grim work. Hamilton to the top, then busted by Vettel, with Leclerc just behind and the gap to the Merc 0.2 seconds, which left just Albon and Verstappen to do their business. Albon slotted behind Bottas and then it was Verstappen, to the top by the slimmest of margins, 0.008 seconds ahead of Vettel..... and no, not your imagination, the times were slower as the temps dropped away. Bit of concern from Verstappen about his front wing as he clearly left some time on the track around turn 8. Leclerc's lap also not the cleanest so all that remained to be seen was whether any of the drivers could wring more time out of a track that seemed to be going away from them.

Albon was first out for the final tilt at the palmares, followed by Verstappen. Raikkonen, Grosjean, Magnussen, then Leclerc, Vettel, Hamilton and Bottas as the final playing order was seemingly settled. Halfway through his outlap, however, Verstappen had quite the duel with Raikkonen for position (which Raikkonen won) and then he was away. Almost even through the first sector, and then the Ferraris dropped away through the second sector, as Hamilton behind was putting on a charge. Hurtling through the final sector it was too little too late for the Scuderia, but Verstappen was able to slice another tenth or so off his time, up to a 1:07.508. Hamilton had also saved his best for last, and with a 1:07.669 managed to split the Ferraris setting up a quite happy race at the front. The 10 spot penalty for a new ICE will send Leclerc back to P14 and leave Vettel all alone in the strategy department, which should make life interesting given how notoriously bad they have been on tyre management in the race, at least relative to the others at the sharp end.

Pretty good birthday present for Christian Horner, with Verstappen rocking onto pole, and not bad for Toro Rosso either, with Gasly claiming best of the rest. Intriguingly, post race K-Mag let slip that one of their biggest issues was losing downforce in high yaw turns, which, along with a ridiculously tight set up window was behind their maddeningly inconsistent performances this year.

Less happy day for McLaren, with Norris unable to get into Q3 and Sainz sidelined with an engine issue (reportedly electronic) before he even set a time. Norris will have a good chance with the contra strategy, starting P10 after the penalty to Leclerc, but it will be a long and brutal day for Sainz, chasing at best a point or two for his team. Racing Point were nowhere today, and perhaps a clue was the fact that they were running cameras in free practice and evaluating tyre temperatures, perhaps suggesting that they were either more focused on the race performance, or still struggling to get the tyres where they wanted them for qualifying.

Tomorrow's race will be an interesting struggle between Verstappen and Hamilton at the sharp end, and though it's likely to be a one-stopper that's quickest, it's worth noting that last year Vettel did run a two stop race. In the midfield, those starting on the more durable Medium tyres will look to take advantage and it will all come down to how well they can manage the tyres in the opening laps. Leclerc coming from P14 will be good for some highlights and as Mother Nature adequately demonstrated today, all it takes to upset the F1 applecart is some changing track temperatures......