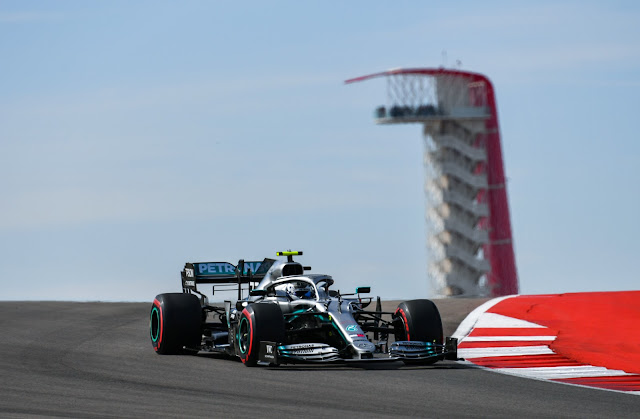 The bright blue sky loomed over the paddock, the sun selling the false idea that it was always hot in Texas despite the distinctly frigid temperatures encountered thus far throught the weekend. With the temps touching 0°C on Friday perhaps it was no surprise that Verstappen led FP3 or that Leclerc's brand new, fancy spec engine had an oil leak that would see him reverting to a previous version for the rest of the weekend....

And the chickens come home to roost as Red Bull have also, finally, gained a clarification from the FIA regarding the method they suspect is behind Ferrari's extra engine power: timing extra fuel delivery between the measurement intervals of the fuel flow meters.... at least according to AMuS who went live with it shortly before the session opened.

Perez was also a victim of the never blinking eye of the FIA as he missed the weighbridge, and then the team inexplicably ran a practice pit stop before rolling him back, which was a guaranteed start from the pitlane move. He did take advantage to replace a bunch of bits, because why not, so at least he will have a refreshed car to have a go with.

Of course, the really big news was that the 2021 regs were published, and that Ferrari had voted FOR them (in the World Motorsport Council), which was a departure from their previous position and it remains to be seen where the rest of the big teams would come down. The deeper mystery remained, however, as Liberty chased down signatures for the commercial agreements with teams that would be the lifeblood of the sport going forward.... if they could get them.

Green Light!! Kubica and Russell were first of the mark as the session opened, but they were not left alone for long as Leclerc was quickly out to make sure his engine installation had gone well. Behind him, Raikkonen and Giovinazzi followed on with little delay.

Briefly to the top then, before Russell rocked by him nearly a full second up and then Leclerc put an exclamation point on it by going round in a 1:34.696 a time not even sniffed at by Raikkonen or Giovinazzi.

Down to 13 minutes left and now the top of the midfield was out and about and it was getting a bit tricky. Kvyat was next up, P2 for a moment until his teammate Gasly hit the line eking him out by just about 0.2 seconds.

AS the midfield got it together the sharp end was not far behind, Albon in particular looking fast. Vettel had large lockup right at the start of his lap, but it didn't seem to make all that much difference as he was still turning up some purple sectors.

Albon took the top step briefly, but Sainz, from behind, then took the spot away from him in a not inconsiderably large 0.6 seconds. Verstappen then rocked up a further 0.367 seconds up as Hamilton was now busy kicking out the jams. Purple S2 and just up on the Red Bull as he hit the line, less than a tenth between them. Vettel had a second bite of the apple, his first effort leaving him in a distant P4, but taking the gap down to 0.3 seconds on old tyres.

As the field rolled in from their efforts, it was Raikkonen, Giovinazzi, Perez, Russell and Kubica on the outside looking in, and no surprise to hear that the track was evolving as the earlier runners all were at the bottom of the field. Time to get it together for the final tilt to make the glories of Q2, with Grosjean in the hotseat P15 and clearly missing some as his teammate Magnussen was in P10. The biggest current surprise was Sainz ahead of Norris as a chunk of the midfield regurgitated itself onto the track.

Hulkenberg, Norris, Kubica Kvyat for starters, then Ricciardo with Kvyat trailing a bit farther back. The next group was led by Magnussen, then Grosjean and Stroll. A big gap and then Hamilton, Russell, Raikkonen, Giovinazzi and Gasly, with Hamilton out there mainly for practice according to his radio.

Hulk was first off with just a minute or so to go.... more green than yellow, and P8 for the Renault. Norris was next and he went P1 heya WHUT???!!! Magnussen P6 as Grosjean made it just up to P14, Raikkonen up to P15 and then Gasly went P4 from P17???!! yup and that put Raikkonen out and left Grosjean in the last transfer spot.....

So it was Giovinazzi, Raikkonen, Russell, Perez (starting from pits anyway), and Kubica going no further, off in search of some chicken fried steak to soothe their wounded egos as the rest got themselves prepared for the rigors of Q2.

Wasting no time,it was Mercedes leading the way for Q2, Hamilton ahead of Bottas, as they both were on the Medium tyre, along with Vettel and Leclerc behind. Further back, Red Bull had done the same with Verstappen, but not Albon.

An ominous amount of purple for Lewis as he finished his 2nd sector and almost a solid wall into his third, losing chunks only to his teammate and across the line he went, P1 with Bottas just behind, then Leclerc and Vettel, despite Leclerc being saddled with an older PU. The midfield continued to blaze through with times, Sainz again the best of the rest leader with Gasly and then Norris and Magnussen as the Red Bulls finally made it across the line. Verstappen on the Mediums sneaking in between Bottas and Hamilton and Albon, on the Softs, into the 1:32's and to the top for the moment.

AT the other end, Kvyat, Ricciardo, Stroll, Hulkenberg and Grosjean were on the outside looking in as time was running out to make the hallowed grounds of Q3....

Stroll was first out, as the teams were all quite concerned with the amount of evolution and avoiding being caught out at the end of the session. Norris was next up, then KMag. Behind him was Grosjean, Gasly and Hulkenberg, then Sainz and Ricciardo. Vettel and Leclerc were next, the Verstappen, Kvyat, Hamilton and Bottas. Both Ferraris were on the Medium tyre, but the rest ran the Softs as is often their habit.

Stroll was first to cross the line and he stayed firmly in P13. Norris, next up was into P7, then no improvement for Magnussen, on the hot seat in P10. Hulk sent him down going P9 then P10 as Ricciardo took it home ahead of his teammate. Gasly sent Hulk out with his P10 and then Kvyat had his time deleted but he was already out anyway and that was the end of that but the focus of attention was a contre temps between Hamilton and Vettel as the Red Bull driver had to take to the grass as Lewis split the difference between him and a Toro Rosso as they finished up their outlaps.

Going no further then were Hulkenberg, Magnussen, Kvyat, Stroll and Grosjean, off in search of some Shiner Bock to drown their sorrows as the rest got themselves prepared for the ultimate test of Q3. Red Bull too, had split strategy at the start, with Albon on the quicker and shorter lasting Soft tyre and Verstappen on the same strategy as the rest of the sharp end.

No investigation though as Gasly, Sainz and Norris got the festivities under way for Q3. Hamilton, Vettel and Leclerc were next out, with Gasly and Norris on used tyres. Verstappen was next off on his adventure as Gasly came round to start his lap, just as Albon rolled out.

Early days it was Sainz, lighting the board purple just behind Gasly who looked strongest with his fresh Softs doing the business. AT least until Hamilton kicked his lap off, taking S1 purple with ease....wait, that was Leclerc stealing the palmares for S1 from him as Sainz was across the line and in the lead for the moment. Yet, despite its not being the tidiest of laps, nonetheless it was then Hamilton to the top. Bottas behind outdid him however, by the rather large amount of seconds 0.3 seconds and then it was Leclerc splitting the Mercedes. Vettel got the better of him, though, and just 0.012 seconds back of Hamilton to boot. Verstappen then a tenth and a half back of Vettel in P3 as the track emptied and Ricciardo decided to roll out for a solo go as the rest got ready to fight it out for the ultimate palmares of pole position.

AS the Renault rounded the final turn it was P8 for the affable Aussie, with Norris now on his last go, followed by Gasly and Sainz. Verstappen, Albon, Vettel and Leclerc were next up, with Hamilton and then Bottas having the last word.

Norris dropped Ricciardo a spot with his new tyres and then it was Gasly across the line, still P10... Verstappen, despite a Turn 1 lockup, halved the gap to Vettel but still P3 as the wind had picked up a touch and no one seemed to be improving. Or maybe it was the temperature, dropping just a degree, but regardless, no one was finding time. Albon's lap was deleted, though he stayed P6 and Hamilton bailed on his lap, leaving just Vettel, who, along with the rest, made no progress from P2 and that left Valtteri Bottas as the pole sitter for tomorrow's race.

OF course that's a bit interesting, as Hamilton was generally expected to win the WDC this round and P5 is the start of the carbon fibre zone, so he will definitely want to make the first few corners intact. Especially with Albon on the Softs next door to him at the start...Good news too for Bottas as Mercedes takes it's first pole since the summer break, though by the slightest of margins. Verstappen in P3 is well positioned to cause trouble at the start, though he might yet be regretting his lockups in his final run, and the strategic wrinkle of Albon on Softs could complicate matters for those at the sharp end when the pit stop dominoes start falling. Further back, McLaren continue to show they are the class of the midfield. especially if one considers the bangin' lap that left Norris leader of Q1... As ever, the razor thin margins guarantee that there will be a fierce fight to claim best of the rest. The usual question of interest is whether those running contra strategies with free tyre choice will be able to gain the upper hand.... Starting from the pits, Perez will be faced with a stern task, but with his tyre management skill it will be fascinating to see how much progress he will be able to make....