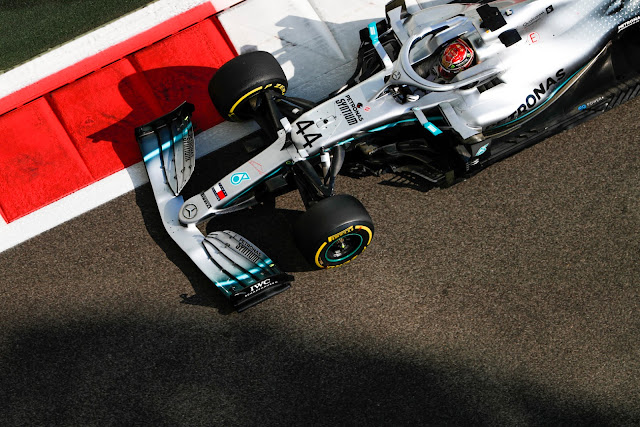 The last rays of light shot through the paddock at the end of golden hour, sun dipping slowly below the horizon as the last race weekend of the year ground slowly into gear. Bottas, as if it weren't enough to be starting from the back of the grid, earned a further reprimand for trying to dive up the inside on a completely clueless Grosjean. And pour one out for the HAAS team as that collision also wrecked the single experimental floor they had, that was running so well up until that point Grosjean had been best of the rest and they had planned to race it. Not to be as the race gods clearly had it in for the tiny team that (almost) could.

As usual, FP3 was mostly pointless, given the savage temperature change on track and given Ferrari's history here, it looked very much up to Red Bull to take the fight in the race to Mercedes if they could. Intriguingly however, Leclerc's pace on the free practice 2 Hard tyre long runs was just about a tenth off Hamilton's on the Soft and slightly faster than Bottas' on the Mediums. Albon was quick on Mediums as well and with no Medium data for Ferrari, welp, let's just say it might be moar fascinating than the timing sheets thus far suggest.....

Green Light!! Albon was first onto the track and there was little time lost before a big chunk of the midfield joined in, Raikkonen, Magnussen and Grosjean, Giovinazzi, Stroll, Perez and Kubica. 6 seconds for a tow was thought optimum on the radio and off Albon went, sparking down the straights as the titanium skid blocks did their job. HE was fastest through sector 1 till Perez took that away from him. The Racing Point was no match for him in the last two sectors though and it was to the top for Albon, though not by much, only 0.386 up on Perez, and it wasn't long before Norris flashed by and was even quicker, as the Red Bull driver complained that the track was quite slippery.

By then the big boys were out to play and it was Vettel, spinning in the final corner as he prepared to launch his hot lap, and as he donutted it round to get pointed the right direction, pretty much on the start line, Hamilton was just finishing his lap and despite the distraction he was fastest at the sharp end. Verstappen was next up and then Leclerc as their times climbed up on the board.

As Vettel got down to sorting himself out, Leclerc was on a second lap and Hamilton was concerned about some clicking he could hear from his seat. Leclerc's lap was stellar through the first two sectors suggesting that track evolution was going to be a thing. Bottas rocked up with a purple 3rd sector and went P3 and Leclerc was again unable to bring it home, sector 3 continuing to be their bete noire, as it was yesterday. Sainz and Norris, in that order, were best of the rest, to the surprise of few at this point, and it was Renault finishing off the top 10, Ricciardo ahead of Hulkenberg.

In the zone of despair were Raikkonen, Grosjean, Russell, Giovinazzi and Kubica as the teams retired to the pits to get ready for the last great tilt to reach the glories of Q2. AS the midfield got ready to go, Hamilton reset the fastest time going 1:35.851.

On the way out of the pits, Kvyat was released into the path of Grosjean, who was most unhappy about it, saying "Not again". Raikkonen was set to be first off, followed by his teammate, Giovinazzi. Gasly then Magnussen, followed by Grosjean, Kvyat and Hulkenberg.

The next set were Norris, Stroll, Ricciardo and Perez with Albon, Russell and Sainz completing the picture. AS the stragglers were completing their outlaps, it was Raikkonen to P15 putting Stroll out. Hulkenberg was next across the line to P9 and that sank Raikkonen. Magnussen to P10, Grosjean to P14 as the HAAS drivers completed their laps as Stroll then was then the only one left on track with the power to do damage and he went P10, sending Grosjean out. Albon went P2 with little notice and Perez snuck quite tidily into P6, ahead of Vettel, whose session had got off to a less than ideal start.

So it was that Grosjean, Giovinazzi, Raikkonen, Russell and Kubica going no further, off in search of some Machboos as the rest turned it around for the rigors of Q2.

Albon once again was first out of the gate at the start of Q2, and it was the Medium tyre, as was greatly suspected from second practice running. Magnussen followed Albon and then a nice gap to Gasly. Hamilton and Stroll were next up, then Sainz and Norris. Kvyat, Hulkenberg and Perez emerged next and then it was the Ferrari pair, Vettel leading Leclerc as Albon rounded the final turn and headed off into the gloaming.

Magnussen was on the Mediums as well, but as Ferrari rocked around it was the Soft tyre they were running, an interesting and contra strategy. Early days it was Hamilton, again dominating as his teammate was apparently taking no further part in the festivities, sitting in the garage with his multitude of engine penalties.

And it was Hamilton then Albon at the top until Sainz came through and split them, the lack of a tow showing in the Red Bull runner's times. Verstappen was easily quicker than Sainz and then it was the Ferrari's Leclerc going P2 ahead of Vettel and just 0.062 off Hamilton which seemed good until you remembered they were running the Soft tyre and still were unable to go faster.

The Medium tyre was proving problematic for Red Bull and as the field retired to get ready for the final scramble for the glories of Q3, surprise, Bottas rocked onto the empty circuit and casually went P2 on the Mediums. On the outside looking in then were Kvyat, Norris, Stroll, Gasly and Magnussen, no surprise slowest on the Mediums.

3 minutes to go and off they went, Stroll leading the way, then Ricciardo and Gasly. Gasly's teammate, Kvyat was next, then Norris and Magnussen. Sainz and Perez tailed them and then Verstappen, on a safety with a set of Softs along with Albon. Ferrari were out too, with Leclerc on the Medium (whut?) and Vettel on the Softs, and they bracketed Hulkenberg the last runner with anything to defend, perhaps save Albon who in P7 might have been at risk with an evolving track.

Stroll kicked off the fun, P13 and looking to make Q3. Personal bests for him through the first two sectors and P10 across the line. Gasly next immediately stuck the knife in deep. Ricciardo to P8 and P13 for Kvyat, unable to find any additional time. Norris to P8 put a savage amd brutal end to Gasly's hopes. No improvement for Magnussen and then it was just Hulkenberg, who rocked up to P10 and shoved Perez, who abandoned his lap, off the cliff.

Going no further then, were Perez, Gasly, Stroll, Kvyat and Magnussen, off in search of some laban to soothe their wounded feelings. Leclerc took top spot on his Mediums and it was officially a split strategy for Ferrari then. Verstappen wanted his front left suspension checked as he hit the inside kerb on his lap, and they looked at it with ultrasound it appeared, just to make sure all was copacetic as Q3 loomed large in their wing mirrors.

Hulkenberg, Norris and Sainz were first off for the final qualifying session, with Hulkenberg losing the stand off and being first on track. The Mercedes were next on track, Hamilton ahead of Bottas and Ferrari followed them, Vettel ahead of Leclerc. Albon finally got his wish, and he was out behind Verstappen and finally getting a tow in his first run.

Sainz was fastest of the first trio then it was Hamilton and Bottas in that order through the first sector, until Leclerc upset that applecart flashing up purples as he rocketed through. Hamilton purpled sector 2 as well but this time it was Vettel who was quickest through there and it was onto the final sector, by far the strongest for Mercedes. To the top then went Hamilton, followed by Verstappen then Bottas, Leclerc and Vettel. Vettel having lost 0.7 seconds in the final sector to 0.5 seconds for Leclerc, against the seemingly invulnerable Mercedes. Ouch indeed!

Sainz was best of the rest, then Norris Hulkenberg and Ricciardo as everyone rolled in to prepare for the last savage go at the ultimate palmares of pole position.

Ricciardo rocked off onto an empty track with 3 minutes left and it was personal bests for Ricky Danny and he wailed across the line and into P7 as his teammate was just navigating the end of the tricky pitlane and emerging onto track. Behind Hulkenberg, was Norris, for a bit, until Hamilton got round him, then Sainz, Verstappen and Bottas. Albon as well and they were arguing over positions most vociferously as time was running short, with no one wanting to have the short straw of lacking a tow. Vettel and Leclerc were at the end and there was a bit of concern from Leclerc as Vettel slowed, and sure enough, that kept him from making the checquered flag and it would be no time set for his final lap, a mistake of colossal, foreseeable, and yet somehow entirely predictable proportion.

Back in the universe of normally operating teams, Hamilton knocked a further 0.4 seconds off his time, as Bottas was up to P2 with Verstappen not able to improve, though meaningless as he would be relegated to the back with penalties. Norris was the only midfielder to better Ricciardo's time, and then it was Sainz and Hulkenberg, so a nice and mixed up fight for best of the rest was on. Vettel had an error in T1, and looking back he was borked by Albon looking for space and it was 0.08 seconds that Leclerc didn't have the chance to find thanks to the incredibly slow outlaps. Though congratulations of a sort were in order, as at least they brought some kind of drama as to what would happen across the finish line, though perhaps not of the sort they might have preferred. Another fun debrief for the Scuderia then, but at least with a split strategy they have less to worry about with regards to their drivers yet again trying to occupy the same bit of track. However, Ferrari are long and practiced at snatching hats out of rabbits so no doubt they will find some way to underperform. Sheer and utter dominance for Mercedes, back to a track that they have long preferred, with Bottas aiming to get back into contention for a podium and Hamilton looking for a proper valedictory performance with his first pole since, wait for it, Germany. Perhaps Red Bull will find a way to make it interesting for a bit at the sharp end with some sort of clever strategy, but truly the dysfunction at Ferrari is likeliest to provide the real drama.

The race for P2 has the potential to be interesting though, and it's worth remembering there are a host of midfield spots up for grabs on the WCC and the WDC, with Toro Rosso only 8 points back of Renault (and that step being worth some real cash), though by today's results not looking likely to close that gap. On the driver's side, Sainz and Gasly are tied on points for best of the rest, with Norris a single point off Perez for 10th and Raikkonen just 2 points behind him.