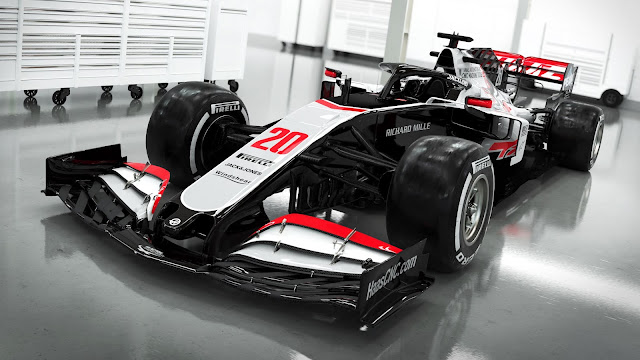 Haas went early, releasing renders of the VF20 prior to their pitlane debut at pre-season testing. Now, whilst it was nice to get an early viewing of some 2020 machinery, the VF20 is not a huge leap forward, rather a consolidation package, designed to heed the lessons of last year.

Whilst there's nothing desperately innovative about the car, there are things that are worth our attention and so I thought I'd cover a few here, even if I'm a little late to the ball and pressed for time.

One of the first things we must remember is that Haas really struggled with last years car and moreover its hot and cold relationship with the tyres. This issue was only magnified when we consider that they ran two cars pretty much all season, with Grosjean reverting to the Day One spec, whilst K-Mag trudged on with their update package.

Unable to find the cars sweetspot, they'd often yo-yo between decent qually pace to atrocious race pace, or vice versa, either car seemingly better for no apparent reason other than they hit the jackpot at that moment. 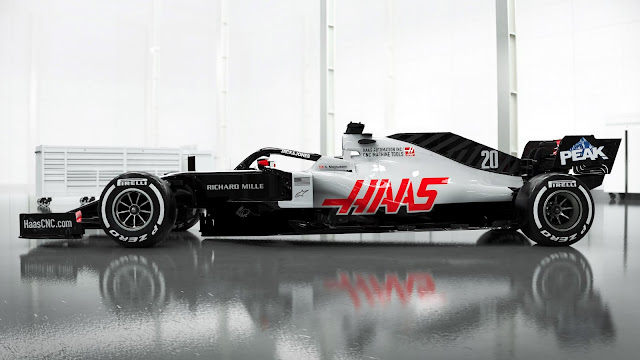 The team continue to employ the listed parts tactic that's served them so well since their arrival in the sport in 2016, taking a raft of parts from Ferrari, in order that they can funnel their resources into more critical areas of focus. The powerunit, powertrain, front and rear suspension and brake assemblies are all designed and manufactured by Ferrari and bought in by the American owned team, whilst expertise from Dallara is sought in order to build their chassis'.

On top of this, the pseudo-Ferrari moniker they've earned is present once more, as the VF20 bears all the hallmarks of the Scuderia's previous design. However, as I've said before, if I were Haas, trying to run a budget similar to their's and taking all the listed parts they do, I'd do similar...

The reason why I say that is, as a team, they know what lane their in, they know that challenging the works Ferrari team, Mercedes or Red Bull for wins is not on the cards. In fact, in their infancy, which they still are in F1 terms, they're simply a disruptor: a fly in the ointment. That fly, up until last season, had spoilt plenty of soup too, unsettling the status quo and dethroning those that ought to be vying for the 'best of the rest' crown.

Onto the car itself... 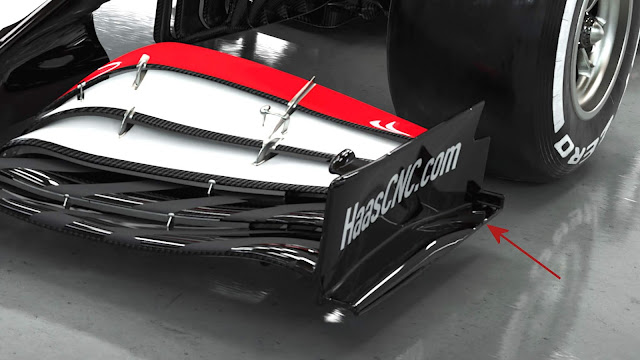 The front wing shown in these renders is akin to the specification ran in the latter phases of 2019, however, it does also feature a trick seen over at Ferrari, where a small out turned triangular strake has been added inline with the contour line of the endplate, improving how the airflow and pressure builds and then spills off the rear section of the wing, endplate and footplate. (Note, what I like here is that they've appropriated a cutout in the latter part of the strake too, not unlike the endplate above..) 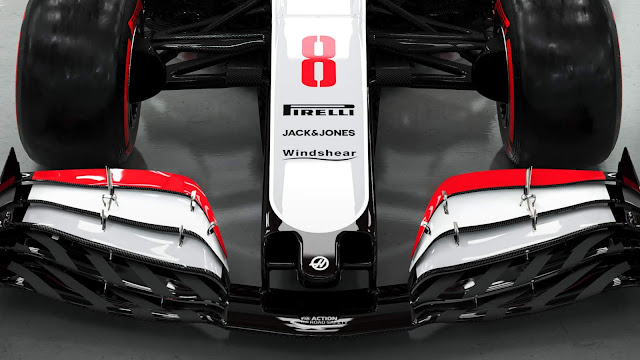 The VF20 also utilises the snowplow between the front wing pillars and beneath the nose tip, creating a more defined pathway for the airflow along the cars centreline and helps to influence the supposed neutral section of the front wing below it. This is another tactic that we saw from Ferrari in their updates during last season, which helped provide some balance and also unlocked dormant performance potential, as suddenly they were able to fire more heat into the front tyres. 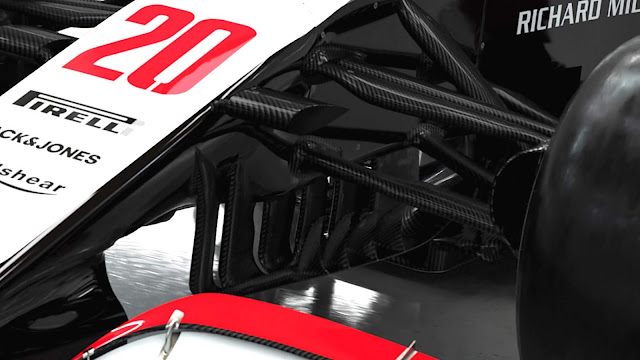 The rather complex turning vanes introduced by Haas last season seem to have had a stay of execution too, although things have been amped a little further, with the forward most elements, which are attached to the underside of the nose and not the tub, reaching a little further forward. 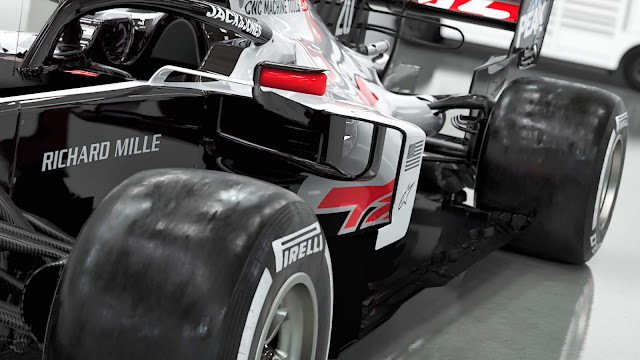 The sidepods are a refinement on what we saw from the team last year, as they continue to embrace the low-slung side impact spar design first seen by Ferrari in 2017 and which seemingly entitles the designers to take liberties with the cooling inlets, reducing their size and the subsequent drag penalty that would be applicable should a larger inlet be required. The mirrors have been designed with this in mind too, with a two-piece construction favoured for the actual mirror housing this year. 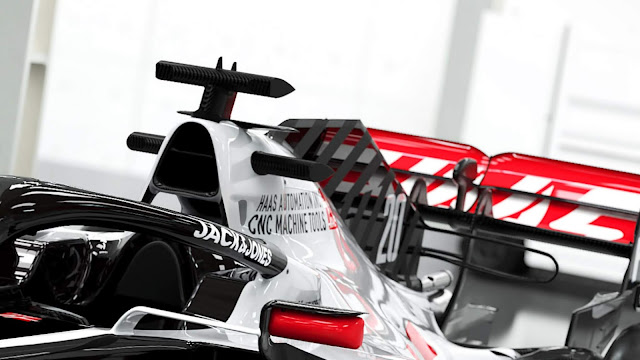 The airbox and roll hoop has been redesigned too, as they favour the triangular inlet shape this year, following in the footsteps of Ferrari's design last year. Not only will this align them in terms of getting the best from the powerunit but it also comes with some other fringe benefits in terms of packaging, as the team have been able to shrink the size of their engine cover, resulting in a larger shark fin. 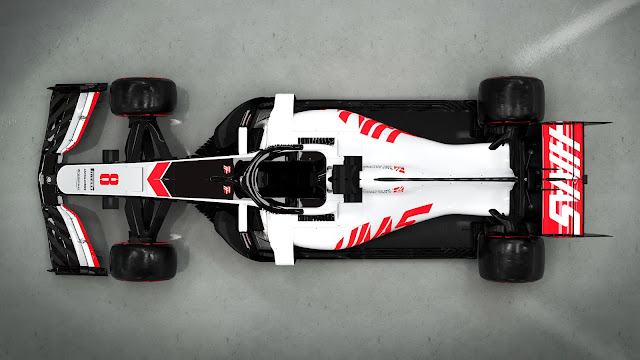 The outer section of the floor has also been refined and now features several almost full length fully-enclosed holes and numerous corresponding floor strakes. These combine to reduce the ingestion of airflow back under the floor, as they look to mimic the effects of a seal on the edge of the floor. 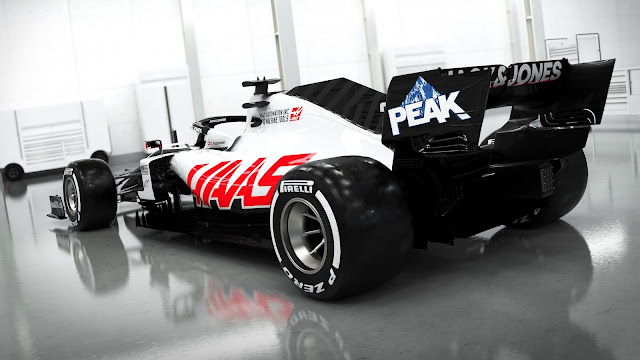 The novel rear wing louvres introduced during last season have also been retained as the team look to not only improve downforce but also reduce drag where possible too.

2020 will undoubtedly be a year where we see Haas strike back, hopefully putting their tyre woes from last season behind them and pushing the likes of McLaren, Racing Point and maybe Renault for fourth place once more.