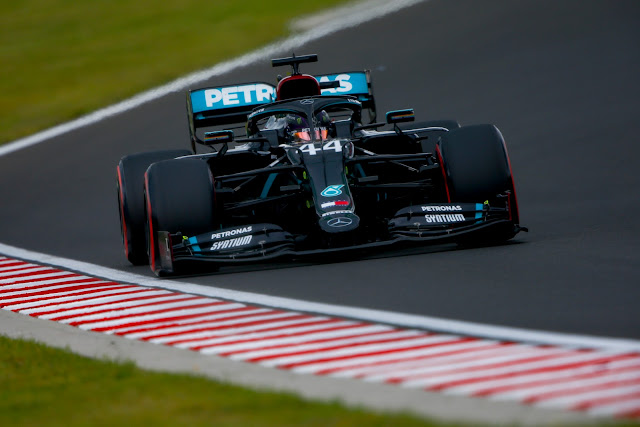 Grey and menacing skies hovered brutally low over the Hungaroring as the paddock ginned themselves up for the always important qualifying session at what is certainly a most challenging track for overtakes. It was humid enough that rear wing vortices were clearly visible throughout FP3 but without the rain track temps began to climb quickly, gaining 4°C over the course of the hour. A flaming F3 car ensured there was plenty of cement dust down at the start of FP3 as well, and the mostly green track meant that rapidly improving times were the order of the day. It was Red Bull's turn to have struggles as Turn 11 in particular seemed to be their favorite place for pirouettes. Also a favorite place for the Mercedes to belch smoke as the camera caught both Bottas and Hamilton expelling very noticeable amounts of oily smoke as the decelerated into the turn.

Racing Point, in the form of Perez, was not only best of the rest at the end of the session, but best of the rest period, just a tenth and a half off of the Mercedes and ahead of the Ferrari of Leclerc, who had usurped Verstappen's usual spot. As the session drew nearer, temperatures began to drop, and the chance of rain provoked many worried confabs between drivers, engineers and team chiefs. The wind added to the general chaos of climatic conditions, an additional and unwanted variable around the twisty, point and squirt circuit. And of course, the ultimate joker, the traffic, which had already ruined more than a few laps during FP3, waited to catch any team that lost its focus...

Green Light!! Verstappen led the way followed by the Mercedes, Hamilton ahead of Bottas and then the deluge, with just the Renaults holding out as the rest rocked onto their first hotlaps. Contra FP3, it was Stroll, P3 behind Bottas and Hamilton taking the place of Perez and as the rest began their cool down laps it was the Renaults off on theirs, Ocon and Ricciardo highlighting their teammate battle. Ocon got the better of their first contest, up to P9 and it was Hamilton, on the second go round, to the top as Perez slotted in just behind Stroll and the track evolution was everything. 10 minutes to go and it was Russell, P13 and again the Williams looking quite good (relative to the exceedingly low bar of last year's performance) on their single lap pace.

Ricciardo was next to make a big jump, up to P6 as he wrung the maximum out of his car. Low 1:16 was the call for making Q2 as the clock ticked by the 7 minute mark and it was Latifi, Raikkonen, Grosjean and Giovinazzi on the outside looking in, with Giovinazzi still without a time on the board, as his kept getting deleted. Both HAAS pulled themselves out of the drop zone as the time continued to tick down, with K-Mag P15 and Grosjean P13.

Two more circuits, and it was Albon in the hotseat, having dropped to P15 whilst Red Bull desperately tried to sort his handling issues in the garage. Giovinazzi finally got a time on the board, P18 as Gasly said he had an issue with his PU on his outlap. With track evolution this was the worst possible news, as in P12 he was highly vulnerable to those behind improving.

Russell, 3 minutes to go and it was on, trailed by Perez. Russell to P4 (not a joke) and then Perez to P1. That's some evolution folks!!! Stroll into P2 as times had dropped into the 14s and everyone was having a panic go. Even Mercedes were back out. Hamilton, P3 and with 20 seconds left to go, Albon bounced up to P7, putting Ocon at risk of going out. Norris to P3, Sainz P5 and Ocon P9. Kvyat failed to make it out and neither HAAS was able to get anything done. Verstappen was only able to get to P8 and as the session ended, it was Magnussen, Kvyat, Grosjean, Giovinazzi and Raikkonen going no further, the Ferrari foursome off in search of paprikash as the rest turned it around for the rigours of Q2.

During the interlude, Red Bull were no doubt very hard at work trying to solve T1 and T2 as both cars were suffering understeer on the way in and oversteer on the way out, not what one would call ideal for optimum laptime...

It was George Russell who kicked off Q2 as Williams now might have got the idea that Q3 might actually be a possibility after his extraordinary lap in Q1. The Racing Points followed him out, on Mediums no less, then Ocon, also on Mediums, and the McLarens on Softs. 13 minutes to go and Russell turned up the afterburner and was off. But it was the Racing Points behind that looked to have the early lock on the top spot. As the leading trio crossed it was Stroll, Perez and Russell with Ocon P4.

Mercedes were next to the top, Hamilton ahead of Bottas, also on the Mediums, followed by Vettel on the Softs. Norris and Sainz were the next two spots back, also rocking the Softs and with 7 minutes to go Gasly put in the last time of the first go round, again on Softs, and went P9 leaving Leclerc, Russell, Albon, Ocon and Latifi on the outside looking in as across the paddock, tyre strategies were being seriously reconsidered.

AS the teams got ready to roll out for the final battle to make the ultimate glories of Q3, Stroll lost power leaving the weighbridge and his mechanics sprinted down the pitlane to push him back to his box and try and get him sorted for the last go rounds. 3 minutes to go and it was rush hour in the pitlane, as all the teams had apparently done the same calculations as to when to get started. Norris, Perez, Sainz, Ricciardo, Gasly, ocon Leclerc and Vettel. A bit of a gap then Russell, Stroll, Hamilton, Bottas, Verstappen, Albon and Latifi, as Norris kicked round the last turn and was off. Mercedes and the Racing Points remained on the Mediums, and it was not a good look for the junior Merc team as neither driver appeared to be improving. Norris to P4 as Gasly's struggling PU finally gave it up and it was only Leclerc on a better lap, up to P4 and putting Ricciardo out as radio reports of spots of rain were being heard. Albon got crushed by traffic, and by the sounds of the conversation, Albon saw it coming and the team didn't... Still it was no consolation as Ricciardo, Russell, Albon, Ocon, and Latifi were going no further, off in search of some Unicum as the rest turned it around to tilt for the ultimate palmares of Q3.

Stroll started the festivities in Q3 followed by Vettel and Leclerc. Hamilton, Bottas were next and Hamilton passed Leclerc on his way to the first hotlaps. Norris, Perez, and Sainz were the next trio out and Verstappen played the lanterne rouge, last to have a go. Purple across the board for Hamilton as looking back to Bottas' times it was going to be Lewis winning the battle of the bankers with a 1:13.613. Bottas was 0.3 seconds back and Stroll slotted an easy P3, nearly a full second back. Perez had his time deleted, and it wasn't a good run anyway and with Gasly not running, Vettel and Leclerc were at the bottom of the order, behind Verstappen, Norris and Sainz.

Vettel was first out to have his final go, as Verstappen seemed to have some kind of issue, possibly PU and it looked like he was one and done. Leclerc was the only other person to join his teammate as the clock ticked past the 4:30 mark. Stroll and Perez were next out as the rest were waiting to the last possible moment to take advantage of maximum track evolution. P4 for Vettel as rear wing vortices popped into view through the final turns. Leclerc went P5 as Stroll maintained his P3 and Perez, on a better lap, went P4. Verstappen managed to get out on used tyres, though that was definitely not the formula for improving your time as Vettel reported a bit of rain at the start of the lap.

1 minute to go and all eyes were on the Merc battle for the pole. S1 to Hamilton, S2 purple for Hamilton and then S3 as well. Nothing doing for Bottas, who nonetheless dropped the gap to just a tenth and that was that for that as neither McLaren finished their second hotlap, leaving them P8 and P9, just behind Verstappen whose ailing ride had nothing left for him to find.

Once again it looks to be a tale of two sports, with the two Mercedes racing for the win and a game of pickup sticks behind. The only difference being both Racing Points finally having the grid position that matched their car performance. With a lack of cloud cover and higher air temps predicted, it may be that the track temps will be significantly higher and that may shift the balance somewhat. Given that, cars starting on the Medium tyre look to have a bit of an advantage, as the Softs were suffering significant degradation in Friday's dry session.

That means the (potential) early lap battle between Ferrari and Racing Point (and between Perez and Stroll) will be where all the action is at the front, whereas Ricciardo will be looking to do the job on the McLarens once their tyres start to go whilst Russell, with his excellent quali, looks to hang on as long as possible. Albon has a massive reclamation job on order tomorrow and as it looks quite likely that Gasly will have to take a penalty of some kind, there's that to consider. Verstappen had issues as well in Q3 that may be PU related, and it's likely to be a late night at Honda HQ as they try to figure out some kind of fix to their current woes. The upside of exploding PUs is of course multiple Safety Cars, and that could well be the fly in the ointment for the teams tomorrow, their carefully laid plans upset at a track that has, on occasion, seen more than a few....