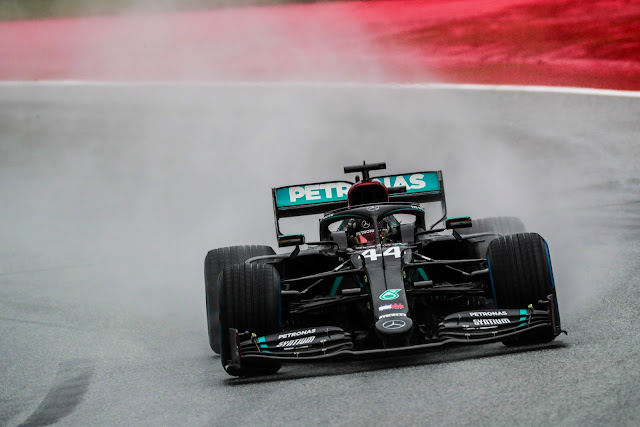 Five minutes to go and the Safety Car was drifting merrily around the soaked track, making the final recon to decide if the cars could go out after a torrential deluge cancelled all of FP3. A period of dry weather had raised hopes and then with just 10 minutes to go, the rains returned and once again the whole enterprise was thrown into doubt. Ooops and there you go, delayed. Given reports of even heavier rain, Sunday morning will be the next possibility. Hope you brought some knitting.... Annnnddd 37 minutes and one scarf later the 10 minute warning was dropped and back into the cars went the drivers as the pitlane exploded into action.

OF course, a wet qualifying tosses out the window all of the carefully collected FP2 data and crucially, at least if your last name is Hamilton, perhaps a bit of an equalizer given the car issues he suffered yesterday. And relief perhaps at Merc as well as the water will perhaps keep their drivers off the PU killing kerbs. And there it was, 2 minutes to go and the entire grid was lined up at the end of the pitlane in case the start of Q1 turned out to be the best and only chance to set a time...... confirmed, heavier rain inbound

Green Light!! Ferrari led the way as it was an all out push to get the best lap in quickest. Giovinazzi was next then Leclerc with Russell and Magnussen at the back of the pack and Mercedes right in the middle. Verstappen saying he can't see a thing as Vettel swung round for his first go...

Leclerc almost lost it at Turn 4 and it was Grosjean, on brand, losing it on his outlap and taking a quick trip through the gravel. Vettel to the top early days, followed by Giovinazzi and Leclerc whilst it was Russell, putting in some purple mini sectors and to P1 he went. Only for a moment but still it was a thing. Unlike dry running the drivers just kept at it and as the second laps came in the water settled a bit and it was Leclerc momentarily atop the mountain, followed by Bottas.

But in the wet, power matters less and with 11 minutes left it was Ocon to P2, until he was unceremoniously dumped to P3 by Verstappen and then P4 by Hamilton as another round of attempts got underway. Grosjean ducked into the pits, an ominous sign and at the 9 minute mark Bottas leapt to the top of the tree as Grosjean was reported as a possible water pump issue. On the outs looking in were Gasly, Kvyat, Giovinazzi, Perez and Grosjean with 8 minutes left in the session.

7 minutes to go and Ocon was on a burner, confirming the form he showed in the wet at Spa, going P2 and then it was Norris, to the top by half a second. Hamilton bounced him by just 0.047 seconds and with 5 minutes left to go the midfield teams started calling drivers in to get new sets of tyres. At the front, the calculus was giving up more chances for better grip, if, of course, one could get the temps back into them, nevermind the fact they only get 3 sets of Wets to get through all of quali.

3 minutes and it was Sainz to the top, then Norris and Hamilton as Raikkonen, Perez, Giovinazzi, Latifi and Grosjean teetered on the edge. Big off for Giovinazzi brought out the yellows ans he had minor contact with the barriers, but he kept it rolling and the red flag was avoided. 20 seconds to go with Latifi almost to the line, the red flag was waved as Giovinazzi had pulled off the track and parked in a "dangerous position".

Going no further were Raikkonen, Perez, Latifi, Giovinazzia and Grosjean, so off they went in search of solace shaped schnitzel while the rest turned it around for the rigors of Q2. Notable performers, for reasons good and bad, were Norris and Sainz in P3 and P4 whilst Vettel and Leclerc were in P11 and P13, with Russell snugged neatly in between.

Q2 opened in a similar fashion to Q1, with a neat line of cars waiting to hit the track the moment the light went green, as rain continued to fall lightly. Vettel was once again first off, but this time he was trailed by both Mercedes as teams attempted to game the weather as best they could. The Renaults and Stroll elected to throw the dice and remained in the pits as the remainder of the field launched their first attempts...

And as everyone completed their first runs it was Bottas, Vettel and Hamilton at the top, but just like the first session, they kept at it and it was nothing but noise as Leclerc nabbed P3 followed by Sainz and Albon. Ten minutes to go and it was Hamilton to the top as Verstappen rocked purples and he went P1 by nearly 0.6 seconds as conditions continued to improve as the cars hoovered up the water and the tyres got up to full operating temperatures.

At the halfway point it was Leclerc, Stroll, Russell, Kvyat and Magnussen on the outs looking in, whilst Verstappen retained his position as king of the mountain and the order looked to stabilise a bit. Five minutes left and Leclerc, P11 decided to rock in for a new set, following Vettel's example. 4:30 to go and it was all to play for from the Scuderia. But it might have been all for naught, as Verstappen radioed in that the rain was getting heavier and a quick look at the sector times showed nothing but yellows. That didn't seem to stop Ocon, who rocked up to P5, just nipping Sainz as Ricciardo improved to P8 as some little bits of green continued to wink in the mini sectors.

Down to the last minute, and Leclerc, Russell, Stroll, Kvyat and Magnussen continued to hang in the drop zone, safety an unbridgeable few tenths out of reach. Last shot for Leclerc as the checkers flew.... and nothing but yellows in the mini sectors and it was only Stroll, with a marginal improvement and then wide at Turn 9 and that might be it via track limits. Oooh and a session full of regret as Leclerc had resisted the call for new tyres initially and as it turned out, neither Ferrari was able to get the tyres up to temps.

So with no changes, it was Leclerc, Russell, Stroll, Kvyat and Magnussen off to drown their sorrows with a bottle of Asbach as the rest turned it around to tilt for the ultimate glories of Q3... Again, Norris P3 was worth a mention along with Gasly P5 and Ocon P6 as they demonstrated their quality in the wet and looked to mix up the grid for tomorrow's race.

Verstappen led the way in Q3 as the rains had almost dissipated and the strategic plan remained get on it as quickly as possible in case conditions get worse... which radar suggested was likely to happen according to team radio... Off they went in massive plumes of spray as water accumulated on track during the interval. The drivers tiptoed around their outlaps and it was going to be a high risk session for all the drivers as Hamilton reported a lot more water was down.

Verstappen was fastest across the line, followed by Hamilton, Bottas, Ocon and Albon. Ricciardo, Albon, Vettel, Norris, Gasly and Sainz filled out the bottom of the grid till Norris, jumped up to P2 and Ocon improved to P3. AS the tyres came in the lottery got into full swing, Gasly to P3 as Hamilton went P1 as the 6 minute mark blinked by.

In these conditions, a minute is a lifetime and it was Bottas, taking advantage and rocking up to P1, albeit 3 seconds slower than the Q2 times, whilst it was Ocon, momentarily at the top of the midfield battle in P4, just ahead of Norris. 3 minutes and Albon delivered, up to P3 and ahead of Verstappen by a tenth as Hamilton retook top spot as the times were starting to drop...

Under the 2 minute mark and now the board was full of purple and green and it was Verstappen to the top followed almost immediately by Hamilton, into the 1:19s a rocking lap indeed in these conditions and it was all going to be down to who got the last lap and with 20 seconds left it was Ocon to P3!!! One more go round for everyone and the tension was palpable.

Verstappen loads of green on the board, a quick yellow that cleared immediately, as Sainz went P3. No improvement for Ocon as Verstappen, hanging onto the far edge of disaster lost it in the final corner and P2 was the best he could do. Bottas nipped to P4 putting Ocon into P5 and that was going to be that for the order. Hamilton on pole with a stunning lap, followed by Verstappen, Sainz, Bottas and Ocon. The bottom half was Norris, Albon, Gasly, Ricciardo and Vettel, P10 and Ferrari with a world of problems and clearly not all power related as the wet track lessens the power advantage.

Tomorrow's race kicks off cool and dry on a green track with a mixed up grid, what more could one ask. It will be hard to top the hijinks of last week's contest, but in the dry Hamilton struggled on Friday so it will be down to whether his engineers have sorted out the balance on his car. If Bottas fails to get quickly round Sainz then it might be the contest that many have waited for, Verstappen in an edgy Red Bull vs Hamilton in a Mercedes that might just stop running at any moment if he rides the kerbs....

The midfield battle will be intense and this time it will be Sainz having the advantage at the start but with Ocon with decent race pace and Norris just behind along with Bottas pressuring him it's likely to be fireworks from the off. Mega show from Russell as well, and that gives Williams a real chance at their first points of the year. AS it turns out, Vettel dumped it on his last lap off camera so the Ferrari remains a bit of a mystery, but cold temps may not be their friends as it seems they were struggling to get the tyres into the window...of course, with a wet quali, tyre choice is down to the teams so even more fun on offer.