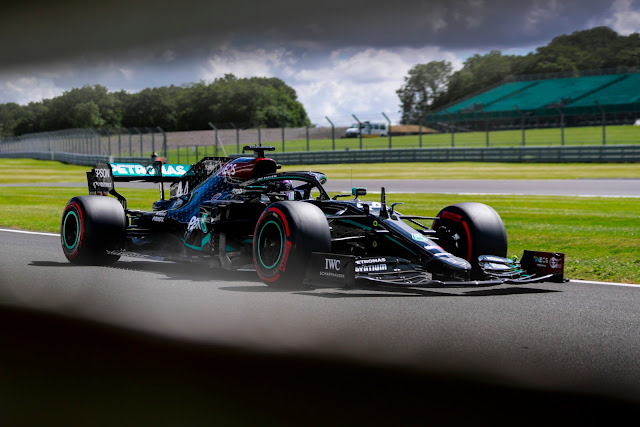 The dark, menacing clouds of FP3, ever so promising of the utter chaos of wet qualifying, had been shattered by an unusual burst of English Sun, blown into cotton candy with ribbons of blue intertwined as the teams made their last preparations to wring the utmost from their precariously balanced steeds. Of course, the biggest news, outside of the 60% chance of rain, was the fact that Serio Perez tested positive for Covid-19, opening the door for recently ditched driver Nico Hulkenberg to walk back into what is certainly the third fastest car on the grid. This also couldn't happen at a worse time for Perez, already the target of many speculative rumours about him losing his seat to Vettel next year.

New gearboxes for the Alpha Tauri and a big crash for Albon also a part of the weekend along with Ricciardo getting a new chassis after the diligent technicians at Renault detected a hairline fracture. Albon's woes continued as he barely got out for FP3 as he had an ERS issue that saw RBR taking apart and rebuilding his ride for most of the session. Not the way you want to head into quali, that's for sure...

Green Light!! Raikkonen kicked off the festivities, trailed by his teammate Giovinazzi as the lads from HAAS were next up, Grosjean leading Magnussen around on the fairly sedate outlaps as they attempted to delicately wrest their tyres and brakes to the perfect temperatures before unleashing the full fury of their beasts on the length of the Silverstone track. 30 seconds on and Kvyat was out, with a new gearbox that was going to cost him 5 grid spots for the start tomorrow, as the Alfas (not Alphas) started on their hotlaps. Giovinazzi won the battle of the teammates but Grosjean was fastest of the first quartet, with Magnussen just behind Giovinazzi. Kvyat then went nearly a second faster than Grosjean and one got the sense that it was the battle at the back that was shaping up between the Ferrari powered teams.

Hulkenberg and Gasly were next to hit their marks, with the Racing Point driver decidedly a person of interest given his last minute drafting into the seat. Some thoroughly entertaining traction losses later and he settled just behind Kvyat. Lelcerc then went to the top, followed by Stroll, just 0.005 seconds behind as the Mercedes duo was testing the waters. Apparently the slightly cooler temps favored the Finn as he went 1:26.092, 0.339 seconds faster than Hamilton, winning the first and third sectors whilst ceding the second to his teammate.

Verstappen hit that gap neatly with his lap whilst Albon seemed to have been released at exactly the wrong moment, encountering car after car on a cool down lap as he attempted to negotiate his first go round. P6 for him, just behind Stroll and a reasonable shout given the severity of his crash yesterday at the end of FP3. Gasly slotted in directly behind him with Sainz and Norris finishing out the top 10 with 5 minutes to go in the session.

On the outside looking in were Magnussen, Raikkonen, Giovinazzi, Latifi and Grosjean with Russell in the hotseat and 0.3 seconds between him and K-Mag in P16. 3:30 left and the track emptied, with the teams readying their drivers for the last desperate gasp for the glories of Q2.

Once again it was Raikkonen leading the way, followed by Giovinazzi. Gasly, Latifi and Hulkenberg went next, followed by the HAAS pair. Norris and Sainz were split by Russell then Vettel, Stroll and Ricciardo. Kvyat and Ocon were at the tail with Hamilton out to circulate as well. Latifi had an off that complicated things at Luffield and did not have a good time of trying to get the car back on track. Russell was up to P12 with his effort, Ocon all the way up to 7th and Hulkenberg got his redemption, up to P4, then down to P5 as Stroll bested him by just a tenth as Racing Point looked to be on for another good weekend.

Going no further were Magnussen, Giovinazzi, Raikkonen, Grosjean and Latifi, and off in search of some mushy peas they went, though Russell was being investigated for not slowing under yellows, though he was adamant he backed off and lost several tenths into the contested corner. On replay it looked as if he lifted on the way into Luffield and then got all squirrely when he jumped on the throttle once he saw Latifi back on track and in control of his car.

Albon led the way into Q2 on the Medium tire and it was only Vettel of the big teams on the Soft tyre, with the rest choosing the Medium. Including Racing Point, who had once again opted to play the big boys strategy. Watching the mini sectors Bottas was just crushing it, while behind Hamilton had a big spin at the exit of Luffield, which sector he was winning until that point. OOF and after getting round to the start the stewards decided to red flag the session to clean up the gravel he'd dragged onto the circuit. That's a set of Mediums wasted for the current points leader and as he waited, it was Verstappen P2, then Leclerc, Ocon and Sainz rounding out the top 5. On the outs looking in as they all waited, were Hulkenberg, Russell, Hamilton, Ricciardo, Gasly and Kvyat. Of those, the last 4 had yet to complete a lap so they were waiting on tenterhooks to get out and set a good time...

Hamilton was first out when the light went green at the end of the pits, and for the moment he had the track to himself. As the time ticked down, it looked more and more like the remaining 3 were simply going to wait and have a single go to make the hallowed ground of Q3. P2 then and 0.332 seconds behind his teammate, but nearly 0.8 seconds up on Verstappen. So there's that done and as the clock ticked down towards 4 minutes and the remainder of the teams waited for what they judged the optimum time to go. Vettel kicked off the parade, rocking the Mediums, followed by Stroll on the Medium and Hulkenberg on the Soft. Behind them were the Renaults, and then a big gap to Gasly, with Sainz, Albon, Norris, and Russell at the back, Albon on the Soft tyre this time round. AS they processed around, Mercedes put their drivers out on the Soft tyres, not so much to run a full lap as to get a feel for Q3. Stroll P9 as Hulkenberg didn't improve and then Ricciardo went P7, just behind Ocon, which put Stroll into P10 and into the hot seat. Nothing doing from Albon, P12 and behind Gasly, P11 and tied with Stroll, but due to Stroll setting his time first, Stroll was through and Gasly was done.

Going no further then were Gasly, Albon, Hulkenberg, Kvyat and Russell, off in search of a nice pint of bitter to soothe their wounds as the rest turned it around for the ultimate palmares of Q3.

McLaren started the final festivites, Norris ahead of Sainz, then it was Hamilton followed by Stroll, Ricciardo and Leclerc, with Bottas trailing that trio. Ocon and Vettel were a bit further back with Verstappen hanging out in the back row by himself. Stroll radioed in Ferrari for an unsafe release and as he was fully on the brakes to avoid Leclerc that looked to be a nailed on penalty. Hamilton and Bottas looked to be recreating their battle, with Bottas behind going S1 and Lewis S2, with Bottas purpling S3 but then a wee mistake into the final complex cost him P1 and left Hamilton at the top after the battle of the bankers, with a 1:24.616. Verstappen claimed P3 followed by Stroll and Leclerc. Vettel was tenth up on Norris and Sainz and Ocon were virtually tied, with 0.053 between them and then a further 0.3 seconds to Ricciardo in P10.

AS the players retired from the stage, it was with a great deal of anticipation that the final runs were awaited, with a decent battle shaping up at the top and a real possibility of some movement amongst the midfield. Once again, Stroll led the way followed by the pair of Renaults, Ricciardo ahead of Ocon, then Sainz and Norris. Leclerc, Vettel, Hamilton and Bottas were next up and then, as per usual, Verstappen bringing up the tail.

Stroll was off to a less than ideal start with a handful of small mistakes, leaving the door a bit open for Leclerc who looked to be taking advantage as the titanic struggle of the Mercedes got underway. Again, Bottas was ruling the kingdom of the first sector, whilst Lewis maintained his control of the second. A mistake for Bottas in Lewis' wheelhouse put him behind and there was to be no recovery as neither driver improved in the last sector. Hamilton with a stonking 1:24.303 claimed pole position with Bottas 0.313 seconds back. Verstappen maintained his P3 but Stroll's messy effort let both Leclerc and Norris ahead, as he fell to P6. Sainz was able to maintain his P7 but Ricciardo improved to P8 as Vettel's time was deleted for track limits, leaving him in P10, starting behind Ocon.

So the podium looked set outside of reliability or the odd crash, with Verstappen set to have a rather lonely race given the race pace deficit of the Ferrari. However, P4 back was anybody's guess, though Racing Point would be the likely candidate to be best of the rest, if Stroll doesn't get the job done at the start both Norris and Leclerc are going to complicate things. On race pace, the Renaults are likely to be in the mix as well and starting on the Softs may let them make up some places at the start. Hulkenberg and Albon coming from the carbon fiber zone well be agititating things as well. And, of course, to my understanding British weather is famously predictable so between the wind and the fact that it might either turn meltingly hot or rain, a bit of chaos is not entirely out of the question....
Tagged
Newer Post Older Post