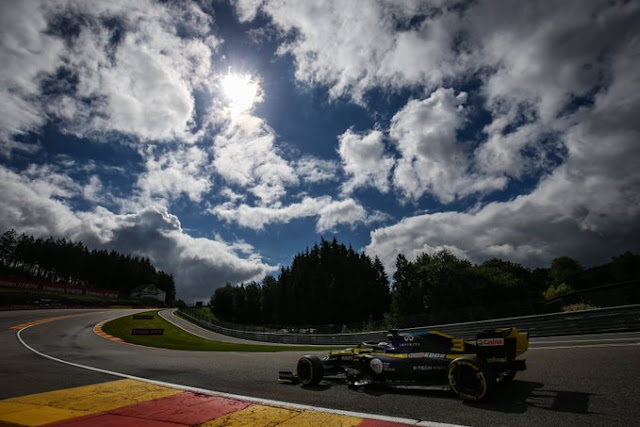 Cool grey skies domed over the rolling hills of Spa, reflective of the mood of many in the paddock, returning for the first time after the awful events of last year, along with the general awfulness of this year as well. Renault have been looking punchy, with Ricciardo yesterday finishing P3 and Ocon, today in P2 for the last practice before qualifying. Of course, the biggest story has been the utter collapse of Ferrari, lingering at the bottom of the time charts and showing absolutely no signs whatsoever of being able to turn it around this weekend.

Red Bull, too, have been feeling plucky, with a relaxed Verstappen fairly happy with his pace, though with no delusions of being able to challenge the Mercedes, who seem to live in a world of their own. Well, one of the Mercedes at any rate... With the engine mode ban looming in Monza, this could well be the last time the world sees party mode activated so enjoy it while you can, though those in the know suspect it will have little ultimate effect on the running order.

As the last minute preparations cranked up and the drivers made their final ablutions, the biggest source of drama likely will be who gambles on the Medium tyre for Q2 and traffic at the end of sessions, along with the (of course) the ever shifting kaleidoscope of the midfield...

Green Light!! Magnussen and Grosjean got the party started, which, after their highly constrained running on Friday was perhaps ot the least bit of a surprise. Still alone, Magnussen led the way, giving a nice slipstream to his teammate. Across the line and it was a 1:45.377 for KMag and three tenths faster for Grosjean. As they finished up their run, Verstappen led the way for a whole gaggle of cars, Norris, Gasly, Kvyat, Leclerc, Sainz, Perez, Ocon, then Vettel Ricciardo, Latifi, Albon, Giovinazzi, Raikkonen, Hamilton, Bottas and then, at last, Stroll. In FP3 this led to a standstill at the Bus Stop and a bunch of unprepared tires leading to some fairly bizarre laptimes.

To very little surprise, Verstappen was fastest off the bat, but somewhat more surprisingly, it was Sainz, then Ricciardo, getting the better of Max, who had no benefit of a slipstream, of course. Bottas and Hamilton then lifted themselves well clear and the shocking weekend of Seb and Charles continued unabated, with Leclerc P14 and Vettel, last save the HAAS drivers. Check that, on a second go round, Magnussen surpassed him.

Kmag wasn't the only one having another go as Verstapen decided to give it another shot and jumped up to P3, roughly 0.8 seconds back of the Mercedes. And then, not much more all the way down to P11, covered off by no more than a couple of tenths. AS the last of the runners retired for the interval, with about 5 minutes left in the session, it was Latifi, Magnussen, Raikkonen, Vettel and Grosjean with it all to do, the glories of Q2 hanging tantalizingly just out of reach as the teams turned them round for their last shot.

Leclerc led the way, with about 2:30 to go, but his slow warm up created a slow speed mess, and as they came round it was just Ocon, staying in the pits for a reason unannounced. After lots of slow speed passing it was indeed Leclerc, first off the mark, then Grosjean, Gasly and Russell. Kvyat kicked off the next group, with Vettel, Perez and Magnussen behind him. Stroll was leader of the next group, then Kativif Raikkonen and wayyy back, Norris. Bottas lagged off the end and as Leclerc was well into his lap he was up to P12. Grosjean up to P13 and then a yellow in sector 3, but it was cleared. Vettel was through, faster than Leclerc as Russell had also gone through ahead of him, leaving the Ferrari driver in the hotseat. Magnussen, as it turned out was responsible for the yellow, having had a big off at Stavelot, and that may just have saved Ferrari's bacon.

Thus it was that Raikkonen, Grosjean, Giovinazzi, Latifi and Magnussen were off in search of some stroopwaffeln to salve their wounds as the rest turned it around for the glories of Q2.

As Q2 opened the tyre mystery was immediately solved as Hamilton, Bottas, Vertstappen, Stroll and Perez all opted to have a go on the Mediums, with the rest on the Softs. Bold by Racing Point...

As they headed to their hotlaps it was Mercedes, Hamilton in the lead, first off followed by Norris Sainz and Russell. Stroll and Gasly were next in a little duo, followed by Ocon leading Ricciardo. Verstappen, Perez and Albon followed and then tagging up at the rear were Kvyat, Leclderc and Vettel. who just cleared the Bus Stop before Hamilton entered it.

Hamilton was up top with a 1:42.014 then Bottas and Gasly, at least until Renault arrived, Ricciardo nipping Ocon by a tenth and both ahead of the Alpha Tauri. Verstappen slotted ahead, in P3 and then Albon, P6 but just 0.25 seconds back of his teammate. Gasly, Norris, Sainz and Kvyat finished out the top 10 as it looked as if the Medium gambit had failed rather spectacularly for Racing Point. So it was Stroll, Perez, Vettel, Leclerc, and Russell on the outside looking in as the teams got ready to chase their last chance at the hallowed grounds of Q3. Russell bailed on his lap as he was on a used set, and so it was just a reconnaissance lap for him and Ricciardo radioed in a brake by wire issue, which was a sensor alert and Renault crossed their fingers they could sort it in the interval.

No surprise it was Racing Point leading the way back out for the final go at Q3 then, with Perez ahead of Stroll, then Russell and Gasly. Leclerc led the next group which consisted of Kvyat, Norris, Ocon, Sainz and Vettel. Verstappen led the third group, Albon, Hamilton and Bottas, as Ricciardo stayed home, presumably having his brakes tended to.

1 minute to go and Perez was off on his effort, and though he looked fast in the first sector, it was Stroll getting the better of his teammate over the lap, going P5 to Sergio's P7 and putting Kvyat and Gasly out. Russell was next up and he improved to P14 then Kvyat was no improvement and out in P11. Albon went P3, as Red Bull had chucked him out on the Soft tyre, and it was Sainz, making waves and up to P5. Thus it was that Kvyat, Gasly, Leclerc, Vettel and Russell were going no further, off in search of some Westvleteren with which to drown their sorrows as the rest turned it round for the ultimate palmares of Q3, Renault frantically chasing Ricciardo's brake demons to get him out in the final session.

Hamilton led the way into the last session, followed by Norris and Ocon. Bottas, Verstappen and Ricciardo (issue solved) were next out, then Albon Sainz, Stroll and Perez set the order for the battle of the bankers as the long outlaps continued. Bang, off went Lewis and it was on, firing up the board solid purple relative to his teammate, and it was Norris, stealing some of his mini sector glory as he came through behind. Sector 2, and again Hamilton purpled the board, battling with Verstappen this time round as he sailed into Sector 3, again a glorious effort as he rocked across the line, with a 1:41.051. Bottas edged Verstappen by a tenth, but they were both more than half a second off, and quelle surprise, Ricciardo split them, taking P3 away from Verstappen no less. Albon P5, then Sainz, Ocon, Perez, Stroll and Norris. On replay, Turn 1 was Bottas' undoing as he got a bit wide and rode the sausage kerb, killing his run all the way to the end of the Kemmel straight. AS the track emptied, and the garages exploded into action, it was Verstappen and Bottas with the most to prove as neither one was where they wanted to be relative to Hamilton.

3:35 to go and out went the field, again Hamilton and Bottas leading the way, then Albon and Verstappen, then Ocon and Ricciardo, then Norris and Sainz, as it looked like the teams were all setting up to give the trailing driver a nice slipstream up the hill. Again Hamilton kicked it off with some purples and even with the benefit of following Lewis, Verstappen was making gains on Bottas, who just seemed a bit off his game. 1:41.252 this time round for Lewis as Bottas kicked up the times, but remained a half second back. Verstappen leapfrogged Ricciardo and Ocon was on a tear, jumping Sainz and taking P6, just behind Albon in P5. Perez and Stroll, having done no second run, were P8 and P9 respectively, and then it was Norris, rounding out the top 10. Verstappen complained in a delighted sort of way,that he ran out of ERS before the lap was over, interesting, as he still finished just 0.015 seconds of Bottas.

Once again a magnificent effort from Hamilton, though the gap to Bottas might be a slight worry for the Silver Arrows, given how close Verstappen is. Happy days for Red Bull, Albon much closer and P5 with Verstappen P3 and unlike his teammate, on the Medium tyre along with the Mercs, which will give them a good deal of strategic flexibility when it comes to tomorrow's race. Also celebrating in style will be Renault, who have had their best qualifying of the season, looking to have finally sorted Ocon's issues and well placed to make some hay regardless of the weather. Slightly less happy were McLaren, with Sainz in P7 but Norris in P10 and decidedly unhappy with Ocon's outlap, said complaint being forwarded to the stewards. Or at least that's what his race engineer said.

Russell in Q2 a small victory for Williams, and Alpha Tauri starting best of the rest gives them free choice of tyres which could well work to their benefit and then it was tears for Ferrari, just abysmal.... HAAS weekend was lost by time Friday was over with the missed running and well, there you have it. Oh, well, and other Alfa also not looking great here.

Turn 1 is an inveterate sower of chaos at race starts, and should either Verstappen, or Bottas (or Ricciardo?) get a hold of Hamilton's gearbox down the Kemmel straight, it's a real possibility to see some serious passing for position on the opening lap, such is the power of the tow. The carbon fibre zone will be replete with anxiety and if that's not enough, one stop or two stop, Red Bull with split tyre strategies, the midfield tighter than ever, so it's with a sense of relief that at least we can count on the weather... oh wait, no we can't as the racing world's most famous microclimate remains poised to wreak even more havoc by threatening rain for tomorrow's race...
Tagged
Newer Post Older Post