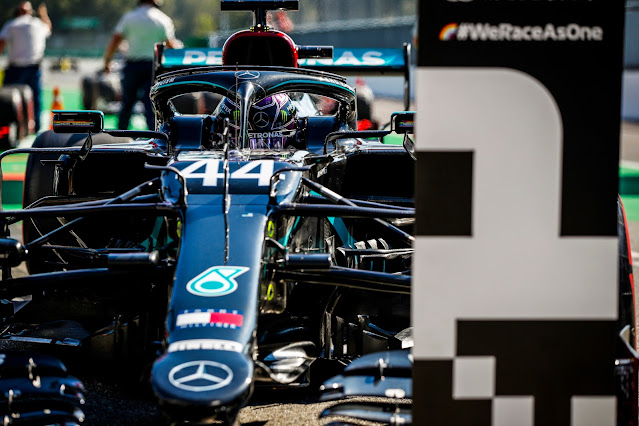 Dazzling azure skies criss-crossed the heavens above the "Temple of Speed", known to layman as Monza, and to the drivers as "stupid first chicane ruins everything". AS temperatures continued to rise from FP3, memories of last year's Q3 fiasco, in which only one driver actually crossed the line before the checquers fell, hung heavy around the event. In order to keep the drivers from repeating said event, (which was either awesome or terrible, depending on who was asked), the FIA had instituted a maximum lap time for outlaps which was mostly ignored by drivers in FP3, and resulted in the near collision of Lewis Hamilton, who had cranked up for a hotlap, with a HAAS that had started to institute a very slow speed pass into Parabolica as the queue near the end of the session grew ever longer. Onto the grass he went and no doubt back into the idea lab went the clever boffins of the FIA.

According to Leclerc, the issue was that on the recharge lap, after fully discharging the battery, the minimum lap delta was insufficient to fully recharge the ERS and as a result it was causing chaos in the rank and file. The end result was 8 drivers summoned to see the stewards less than an hour before qualifying started: Latifi, Grosjean, Perez, Gasly, Stroll, Albon, Sainz and Hamilton, with the outcome yet to be known.

Also causing chaos, and a red flag, was Daniel Ricciardo, whose Renault, on point as usual, immediately failed him after jumping high up the timing board. Whether Renault would get it sorted prior to qualifying remained to be seen as the clock ticked down. Causing a bit of a ruckus as well was McLaren, notching 2nd and 3rd in FP3, though certainly the all important tow, worth 3-4 tenths, had a part to play in that. In fact, the most likely chaos generator was likely to be the battle for that tow as the sessions come to a close, much as it was last year and despite the best efforts of the FIA...

Green Light!! Magnussen led the way to the first party without party mode, with Raikkonen and Latifi behind him. Grosjean, Russell, Vettel and Leclerc were out behind shortly after. As their fight raged across the lap, it was Bottas, out for Mercedes, followed by Sainz, Hamilton and Perez. After the big boys came through it was Hamilton to the top, but Perez P2 and Sainz P3 were the standouts, with Gasly also being up there, but with a deleted laptime. Also being deleted were Stroll and Albon and as they retired from the initial round of efforts, it was Grosjean, Vettel, Giovinazzi, Russell, and Latifi on the outside looking in, with Albon in the hotseat. Not exactly where either Ferrari, or Red Bull, wanted their drivers to be.

3 minutes to go and off they finally went, Mercedes leading the way with Bottas leading Hamilton. Ocon was out behind the Silver Arrows, and he had already been less than happy, complaining of being blocked on his first go. Albon back of him and then the slow speed maneuvering began, as they rolled into the lap, it was Latifi, behind the Mercedes as Ocon and Raikkonen battled into and then through their lap. Albon too was elbows out to try and get a spot as he was swarmed by midfielders.

Neither Ferrari was able to improve as the madness destroyed everyone's lap. This put Vettel out in Q1, ouchies, and on the radio he was immensely unhappy with the Alfas for speeding up and trying to pass everyone. Kimi was nonplussed with Ocon's defense and abandoned his lap as well. At any rate, done for the day and off for some cichetti were Grosjean, Vettel, Giovinazzi, Russell and Latifi. As the rest turned it round for the glories of Q2, Russell was on the radio stating they needed to be the ones capitalizing on the eff ups (edited for profanity) not the ones caught up in the eff ups.

Well, after that excitement it was Mercedes, again leading the way into Q2, Bottas ahead of Hamilton and again trailed by Ocon, who, dropped way back and allowed Verstappen past. After them, it was Ricciardo, Sainz, Albon, Leclerc, Norris, Perez, Gasly, Stroll, Magnussen and Raikkonen, who just left the pits as Bottas was rocking around Parabolica. All the cars were on the Softs so that was that for that, at least for those hoping to make the top 10.

2 tenths for Lewis in the first sector, but Bottas pulled some back in the second but then Lewis ruthlessly dominated the last sector and it was a 1:19.092. As the times rolled in it was Perez, Sainz, Verstappen for the top 5, and then Kvyat, Ocon, Leclerc, Magnussen and Raikkonen, on the outside looking in. Sure was looking like the demise of party mode wasn't a terrible thing, at least for those with a Mercedes PU. Albon in P10 was again in the hotseat and nary half a second covered P3 to P12, which, essentially meant it seemed a bit of a crap shoot who would actually make the hallowed ground of Q3.

4 minutes to go, and all the runners were ready to go, and none left the garage, sat there and then they gloriously exploded out of the pitlane with 3:30 left in the session. This time it was Renaults out ahead of Mercedes, with Raikkonen between Bottas and Hamilton, with Hamilton dropping further and further back to avoid the back of the Alfa before the end of the lap. Stroll followed Lewis, then Albon, Perez, Verstappen, Norris, Sainz, Leclerc, Magnussen, Kvyat and Gasly bringin up the rear.

Ricciardo into the gravel as he got into the Lesmos and he backed off as Ocon slingshotted around, his tow gone. No improvement then and out went the Renault driver. A yellow in the middle sector may have spoiled some times (it was Magnussen), and neither Alpha Tauri improved and thus it was that Kvyat, Ocon, Leclerc, Raikkonen and Magnussen were off in search of some prosecco as the rest turned it around for the hallowed grounds of Q3. Ocon's defense of Raikkonen was being looked at by the stewards, but not till after the end of the session so there's that to look forward to for the already disappointed Renault driver. Speaking of disappointed, despite barely squeaking through each session, Albon was just under 3 tenths off his teammate, which was actually a good showing for him. At the front, Bottas was the only driver to improve and into the 18s to boot and ahead of Hamilton, with Leclerc and Sainz the only other drivers to improve.

Into Q3 they plunged, Mercedes leading the way, Bottas ahead of Hamilton, then Verstappen and Albon. Perez and Stroll were next up, then a big gap and Sainz, Ricciardo and Gasly, with Norris at the end of the tail. Off they went, sector 1 to Hamilton, sector 2 to Bottas and then the decider, and it was Hamilton by 0.053 seconds taking the battle of the bankers. Behind, the times rolled in, Verstappen P3 till he was booted by Perez, Sainz into P5 followed Stroll, who began dropping as the final times came in. Norris took P6 as the dust settled, then Ricciardo, Gasly, Stroll and Albon, just 0.2 seconds off Verstappen again, but with a deleted laptime dropped from P7 to P10. Ricciardo was on scrubbed tyres and Stroll thought he had some damage from getting a bit wide and over the kerb.

This time round, Mercedes rolled out with 4:30 to go, and again it looked like Hamilton was staying just outside slipstream range, despite the obvious advantage. Albon trailed Hamilton and he was ALL about the tow, then Verstappen, Gasly, Perez, Ricciardo. A bit of a gap, then Sainz, Norris and Stroll at the end.

This time around it was Bottas improving, but Hamilton looking even quicker and again, it was Hamilton, by less than a tenth with a 1:18.956 taking pole position with what 5 Live called the fastest lap in Formula 1 history, (imagine a slipstream and party mode!!!) but it was Sainz, after not even starting the race last week, with a magnificent lap, nicking P3 from Perez. That dropped Verstappen to P5, followed by Norris, Ricciardo and Stroll. Albon, 0.3 seconds back of Verstappen, did manage to outdo Gasly, who dropped to 10th on the grid as this was, and has clearly been, not a track that favours the Red Bull.

Tomorrow's race will feature more than a few battles, notably Perez trying to get ahead of Sainz, with Verstappen very much wanting to get round the both of them at the start, especially as the McLaren tends to really come into its own in the second half of the race and will otherwise hold them up. Ricciardo on the outside of the 4th row not to be overlooked, as they appeared to have good race pace and Renault were very quick in sector 1. Naturally, Bottas will do his best to get Lewis in the first laps as otherwise it's highly likely the race for the win will be a foregone conclusion.

Ferrari will want very much to get Leclerc into the top 10 if possible, and the big mystery will be tyre choice for those that get to choose, Leclerc included. The Softs should yield a better start but if you have confidence in your pace (and driver), the Medium should yield opportunities to force your opponent's strategy and make late race gains and it's perhaps worth noting that Bottas went long last year (admittedly on the same tyre but still), pitting 7 laps later and taking P2 from Lewis as a mistake on lap 42 on his older tyres allowed his teammate on newer and better tyres to rock right on by, as he was already catching at a precipitous rate...

The biggest loser in qualifying has to be the FIA's laptime rule, which utterly failed to stop the chaos it was intended to, and perhaps as a close run thing, the ditching of party mode, which seems to have had little, if any effect on the Mercedes it was meant to hobble. Oh well, back to the drawing board one supposes.