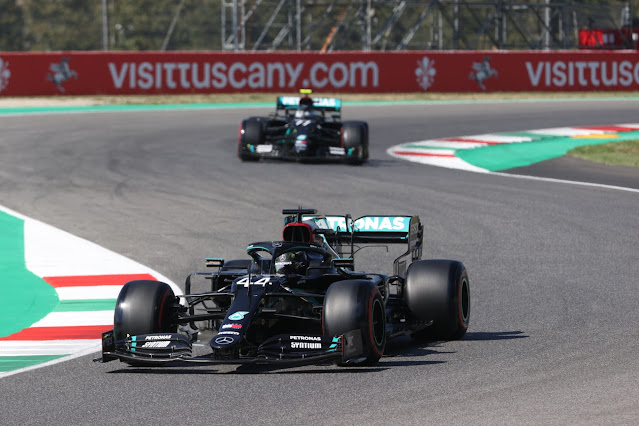 A shockingly blue sky edged by haze dominated a hot and windy day at Mugello, the kind of day that featured in movies and was promised by ads in the famed Tuscan countryside, as the imagination ran riot with drivers feasting on truffles and glorious spreads of salumeria and insalata gracing the paddock for all the teams to enjoy... Of course, at Ferrari's biggest celebration race, which was never going to be the success they wanted given their current troubles, it seemed perfectly natural that their now rival, Racing Point (soon to be Aston Martin) most naturally announced that they were booting their solid veteran driver Sergio Perez for outgoing Ferrari 4 time world champ and increasing disappointment (from the team's point of view) Sebastian Vettel. Though said cause of disappointment is open for rather vigorous debate....

The aesthetic delights of the track notwithstanding, there is more than a bit of concern that the old school nature of the track will put a premium on track position with little to no passing save in the pits, with again the one stop being the favored strategy but considered less likely to be possible given the high tyre wear drivers were encountering. Of course the pit exit being directly at the apex of turn 1 does promise some excitement, as adequately demonstrated by a lovely contretemps between Raikkonen on a hot lap and Perez exiting the pits yesterday in FP2. Two red flags during that session in fact, one for that incident and the other for Norris, who got a bit too much in the gravel and said hello to the wall as a result. So for those who enjoyed the standing restart of Monza, perhaps there will be a few of those on the morrow to liven things up a bit.

In terms of FP3, Verstappen seemed to be there or thereabouts with Mercedes, and Stroll, remarkably the ONLY Racing Point driver with the huge new update package, looking quick, whilst Russell missed the whole session with a brake issue. AS the start of the session crept ever closer, it was announced that there would be track limits after all, at T14, where one was now required to keep at least one wheel on the red and white kerb, whereas previously the drivers had free reign...

Green Light!! Russell was first out of the gate, no surprise really since he missed all of FP3 with a brake-by-wire issue and his teammate, Latifi was not far behind him. 15 minutes left and well into their laps and no one else had come out to play so it was a straight intramural battle. And quelle surprise, it was Latifi to the top by a tenth... AS he rolled onto his cool down lap, Lance Stroll was out followed by Raikkonen and Giovinazzi, with Perez the other piece of bread in that sandwich. McLaren and Mercedes were next, then Verstappen and Kvyat as the remainder looked to be waiting a bit longer before getting their velocity on. To the top went Stroll, all purples as the Mercedes, Lewis first this time, got their day underway.

First sector to Hamilton but second and third to Bottas and with that a miniscule margin for the Finn, P1 by the staggeringly small 0.029 seconds. Norris was bogged down amongst the Alfas and for Max it was the relatively encouraging gap of just 0.5 seconds to the Mercedes ahead. Perez, Kvyat and Sainz rocked up behind Stroll in P4 as the remainder of the runners were out, notably Renault and Albon along with the Ferarris...

Ocon was across the line just behind Sainz, whilst it was Albon up to P6, still far off his teammate by 0.7 seconds. Ricciardo nicked Ocon by a tenth for the last points paying position whilst Leclerc bopped up to 7th and Vettel wound up P13, which became P14 when Latifi, having had a second go, managed to best the Ferrari driver by 0.02 seconds.

As the field retired to make their last minute adjustments in an attempt to reach the glories of Q2, it was Gasly, Raikkonen, Russell, Grosjean and Magnussen on the outside looking in, with Norris very much in the hotseat as the teams began to roll out for the finale of Q1.

Perez was first up, well on his own, then Russell led the main train followed by Magnussen, Ocon and Grosjean. Raikkonen, Gasly, Giovinazzi and Latifi were the next quartet up as Perez managed to nick Stroll for P4 by a tenth.

Ricciardo was next up, then Sainz, Albon Vetlle Norris Leclerc and Kvyat, with Hamilton having snuck out as well. Russell was on a good lap but then went wide, dooming his chances. Behind, all the drivers looked to be improving, and it was Russell to P12, Magnussen out then Raikkonen went to P9 as Vettel was pushed out. Grosjean nocked P10 as Ocon went P6 with Ricciardo behind. That put Russell out and then Albon improved to P4, well done. Leclerc then went P6 with Stroll behind which dropped Ocon to P8 while Norris and Kvyat both hit the 0.2 second gap between the Renault drivers thus dropping Ricciardo to P11. This also dropped Gasly out and left Vettel in P15 by just half a tenth.

Thus it was that Gasly, Giovinazzi, Russell, Latifi and Magnussen were off in search of some Bistecca Florentine as the rest turned it around for the rigours of Q2. Bit of a kerfuffle as both Alfas apparently jumped the hapless Grosjean as he attempted to line up a gap for his final go and he was not a happy bunny on the radio afterwards...

Q2 opened with Hamilton leading Bottas, again, right out of the gate with a trio of Stroll, Verstappen, and Leclerc. Verstappen overtook the Racing Point by time they got to turn 3, and as that drama unfolded, it was Perez, Ocon and Albon as Ocon looked to be a bit in a hurry, overtaking all the way past Vettel to hit a gap behind Stroll as they got to the end of the lap.

Bang! Hamilton was off after nearly coming to a stop and the battle was joined. Sector 1 went to Hamilton but this time, sector 2 as well whilst it was Verstappen stealing a march and nabbing sector 3. This time Lewis held the upper hand by the vanishingly small 0.013 seconds on a 1:15.309 whilst Verstappen rocked up just 0.162 seconds off Bottas. Albon was in for P4 whilst Ricciardo this time edged his teammate by 0.2 seconds with Stroll followed by Leclerc sandwiched in between. Perez and Norris nabbed the last 2 transfer spots and as they retired to make their last, desperate refinements for their last shot to make the hallowed grounds of Q3.

Thus it was Kvyat, Sainz, Vettel, Grosjean and Raikkonen with it all to do as Sainz was on the radio complaining about management, presumably meaning traffic. All the drivers elected to use Softs so there was to be no messing about with fiddly tyre strategies on Sunday then....

Perez led Stroll out of the gate for the final tilt, then 20 seconds later, out came Vettel leading Leclerc. Raikkonen and Norris made an odd couple followed by the trio of Sainz, Ocon and Grosjean. Hamilton, Bottas, Verstappen, Albon and Ricciardo all elected to sit it out as Perez failed to improve as he hit the line. Leclerc was making no progress, but Ocon leaped up to P7 as Norris confirmed his P10 with just his teammate, Sainz left on track and it was Sainz, doing the job and sticking the knife in deep, deep sixing his teammate and making the jump to Q3.

Thus it was that Norris, Kvyat, Raikkonen, Vettel and Grosjean were done for the day, off in search of a negroni to ease the pain as the rest turned it around for the ultimate palmares of Q3.

Stroll and Sainz were first out of the gate in Q3, followed by the Mercedes of Hamilton and Bottas. Verstappen and Albon were next to make their appearance, then the solo Ferrari, Leclerc, followed by Ricciardo. And that was it, the track stayed quiet as they got themselves underway.

The battle of the bankers again fell to the favor of Hamilton, with a 1:15.144 and 0.059 seconds up on Bottas, Verstappen was 0.4 seconds back in P3 and then Albon, another 0.4 seconds off. Stroll was best of the rest this time round, then Ricciardo, Leclerc and Sainz. Perez and Ocon, with just a single new set of Softs decide to bet it all on a single run...

Perez hit the gap as the rest of the teams were turning it around for their final shot at all the marbles, and after a serene and unhurried outlap he rocked up to P5 putting the rest of the midfielders down a step and leaving them all just that much more to do.

Hamilton led the way into the finale, followed by Leclerc and Verstappen before Bottas moseyed on along. Albon's car was up on the jacks as Sainz, Ocon and Stroll filtered onto track, then Ricciardo, who lost the rear on his first go according to his radio, so had room to improve, and Albon, issue sorted, was the lanterne rouge as the last laps got underway.

It was not the best of runs for Hamilton, and then Ocon brought out the yellows early in the lap and pretty much hanging Sainz, Bottas, Stroll Ricciardo and Albon out to dry, losing the rear and any chance he had at starting above P10. Leclerc, ahead of the fuss did manage to improve and knocked Perez out of P5 and so it was Stroll, Ricciardo, Sainz and Ocon behind with Hamilton, Bottas, Verstappen and Albon on the first two rows.

Bitter disappointment for Valterri as he felt that he did have it in him to have improved so once again it will be very much down to the start and he will certainly want to make amends for his rather disastrous start last week, but another front row lockout for the team so job done. Naturally, his disastrous start last week will also be on his mind so....Good day for Red Bull, locking out row 2 of the grid and Max, in particular, looking like he may be able to shadow the Mercs a bit more effectively at this track. Granted his rivals behind being torpedoed by the yellows, Leclerc absolutely made the most of his moment, and that sets up quite the obstacle for the drivers behind, with better race pace and desperately impatient to get by and decidedly gives the Ferrari fans a bit of something to cheer for. Stroll behind Perez is its own mini drama and Ricciardo very much appeared to have P5 on his mind so there's no dearth of opportunity to be made up for when the lights go out.

An almost complete lack of data by the teams means that although they will all WANT to run one stops, whether or not they can won't really be answered until the blisters appear. If Verstappen is able to get amongst the Mercs at the start and really push them then it will be fascinating to see how the strategy plays out, especially if Albon can stay in touch and play a proper role in Red Bull's strategy. And as usual the midfield is pickup sticks, but in general during races both Renault and McLaren have had an advantage over Racing Point when tyres are being tested but are starting behind them which sets up the possibility of some unusual strategic moves, whilst the runners behind them likely starting on more durable tyres also sets up some interesting (unless you're in charge of strategy tomorrow) complications for the race...