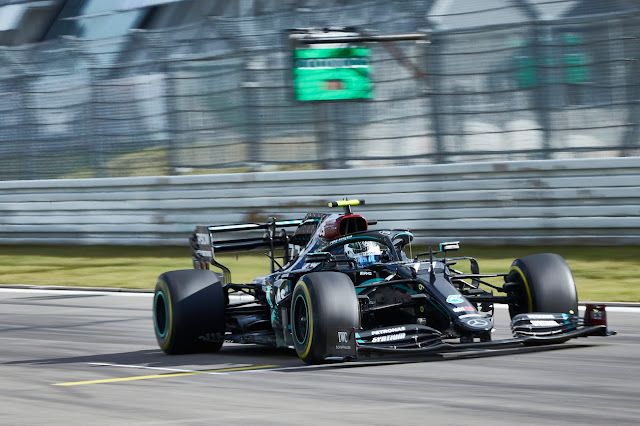 Bright blue skies concealed bitter cold, with temps in the single digits as drivers requested hand warmers such were the frigid conditions. AS the qualifying session approached the teams were desperately on it, trying every last trick to find that last degree of temp to get the tyres working at their optimimum and pitwall personnel were wrapped up like burritos. The big news was Hulkenberg was back, after Stroll reported feeling unwell this morning and missed FP3. Should be a bit of an adventure for the German, who conveniently was already headed to the track to do some telly work when the call came.

FP3 being the only session before qualifying also meant that some surprises were possible and one of the biggest was that outside their highest engine mode, and even with DAS, Mercedes seemed to be struggling a bit with front end grip, which was particularly notable into the first turn. This was likely a result of the low rake philosophy, which tends loads the fronts less and thus it was also likely that Racing Point would suffer in similar fashion. The Ferraris were looking surprisingly good, particularly in the hands of Leclerc, and it was not just the upgrades they brought having an effect, but also the fact that their PU seemed to really enjoy the colder weather, allowing them to regain some of the performance that was lost in the higher temperatures as more efficient cooling, denser air and improved combustion brought them back into the picture at the front of the field.

Green Light!! Magnussen led the way, followed by Grosjean and Hulkenberg. Next up was the trio of Gasly, Russell and Kvyat followed by Raikkonen, Giovinazzi and Latifi. Norris led HAmilton and Bottas out as the HAAS duo rocked onto their first go at a hotlap.

Kmag won the battle of the teammates but with a deleted laptime that momentarily left Grosjean at the top. AS the early times rolled in it was Kvyat ahead of Gasly with Raikkonen slotting in between. Hamilton was straight into the 1:26's with Bottas roughly 0.2 seconds back. Norris slotted into third as one of the Renaults were now having their turn.

Ocon landed behind Norris for the moment, with a bit of traffic slowing his lap and then Verstappen went to the top as it was Leclerc's turn for P3, before Bottas reclaimed the spot for Mercedes. Ricciardo banged out a P5 at least until Albon took it away from him, albeit still 0.8 seconds off his teammate who was still king of the hill.

With 11 minutes left the Mercedes were still on it and Bottas took P2 from Hamilton and as the interval approached it was Ocon and Vettel farthest off their teammates and the HAAS seemingly doing quite well with the colder temps, nearly within shouting distance of Q2.

As cars returned to the pits it was Grosjean, Magnussen, Raikkonen, Giovinazzi and Hulkenberg on the outside looking in and it was HAAS, once again first out of the gate to have their turn. P7 for Magnussen was a bit of a surprise but Grosjean had his lap deleted, after going P5 and demonstrating just exactly how much the Ferrari PU was enjoying the cold weather.

Gasly jumped into P5 as the track was now full of desperate time seekers, with Hulkenberg going P19. Ocon was next to make a big leap, up to P7 and ahead now of both Albon and Magnussen. Vettel then slotted behind Ocon which dropped Russell out for the moment. As the checquers flew it was still a fair number of cars on it and Norris banged up to P4 and last across the line Ricciardo took P5 just 0.017 seconds back of Norris as the Renault-McLaren battle was shaping up to be a thriller.

Going no further then were Grosjean, Russell, Latifi, Raikkonen and Hulkenberg and they were off in search of some wurst to warm their insides as the rest turned it round for the rigors of Q2. In reality, it was Racing Point seeming most out of place, with Perez a surprising P10, though perhaps not as much the evidence piled up that they, much like Mercedes, were having a hard time with the low raked getting the fronts to work properly.

Q2 opened with Mercedes leading the way, Hamilton again ahead of Bottas. The pair were trailed by Vettel, Leclerc and the surprise Magnussen. Both Mercedes and Ferrari were running the Medium tyre along with Ricciardo and early days it was once again, Hamilton winning the battle of the teammates. Perez on the Softs rocked into P2, and then Magnussen, continuing his fine run was up to P5 for the moment.

And that moment was naturally fated to be shortlived as Leclerc, Vettel and Giovinazzi all finished ahead of him. The next group of drivers in included Verstappen, who easily went fastest on the Softs, into the 1:25s, as Albon went P3 and Norris and Ocon locking out the top 5. Ricciardo just sneaked into P10 with his Medium tyre gambit, which would likely see him have a go with the Softs. On the outside looking in were Vettel, Giovinazzi, Magnussen, Kvyat and Gasly.

As the teams made their last preparations for the hallowed grounds of Q3 team radio informed Ocon that both he and Norris were on the bubble and would have to run another lap.

Ferrari were just finishing their outlaps as Bottas, who had switched to a set of Softs in order to ensure his progression to Q3 emerged. Hamilton, too, was out on a set of Softs and with an empty track it was Bottas up to P2 and Hamilton then going even faster, 1:25.39 and to the top he went as he crossed the line, as Mercedes had evidently rethought their desire to start on the Medium.

Ricciardo was under scrutiny as he was P10 and he was improving as his first sector showed on the board. Through 2 sectors it was Norris, a tenth up on Ocon but Ricciardo was faster than both and he rang the bell in P4. Norris maintained P6 but Sainz slipped through in P7, 0.003 seconds up on the Renault driver.

Perez then made life worse for the young Frenchman going faster than Sainz and putting him into the hotseat. Vettel notched P11 as Leclerc took advantage of his late lap and went P5, a decidedly unexpected surprise. Going no further and off in search of the schnapps bottle were Vettel, Gasly, Kvyat, Giovinazzi, and Magnussen. But the most delightful news was that the gap between Verstappen and Hamilton was under a tenth....

The hallowed grounds of Q3 were opened by McLaren, with Sainz leading Norris as behind it was the massive might of Mercedes, in the form of Hamilton and Bottas next to cross the pit exit. Renault were the next team out, with Ricciardo leading Ocon aroudn then Leclerc, Verstappen and Albon the tail of the field.

In the battle of the bankers it was Norris notching the first sector, nearly 0.2 seconds up on Sainz whilst behind Bottas was quickest. Bottas continued the trend into sector 2 as ahead, it was Norris taking the win over Sainz. As they finished the final sector it was Bottas, winner of the banker competition as Ocon managed to get ahead of both the Maccas and wound up P6, with only Albon and Leclerc ahead of him. Ricciardo had some kind of problem and had fallen to P10 and then it was Verstappen across the line and fastest of all, provisional pole as they rolled into the pits to make their last adjustments to extract every last thousandth in the battle for the ultimate palmares.

On replay, Ricciardo's nightmare began early as he failed to negotiate T1 properly and then it was all downhill from there. Perez was first out whilst most of the rest lounged about as Racing Point looked to get an undistracted run in for their driver. As he ticked over into his last lap, Norris emerged from the garage, with Sainz a bit behind and it was on.

Ricciardo and Ocon trailed the Macca drivers out, followed by Hamilton and Bottas, then Verstappen and Albon completing the full teams ticket, and a lonely Leclerc last of all.

Sector 1 went to Bottas by just 0.04 seconds over Verstappen with Hamilton slowest of the top 3. The Finn maintained his purple dominance through Sector 2 as he went to the top and again, Lewis was slower than Verstappen and it was only a magnificent third sector that allowed him to lock out the front row for Mercedes, Verstappen having missed out by just 0.037 seconds as Max lamented just not having the grip. Ricciardo got the job done and slotted in just ahead of Ocon and that just left Leclerc, who was clearly on it and rocketing through his final sector. Across the line and P4!!!! A big result for the Ferrari team that for the last races seemed very much to have been consigned solidly to the middle of the midfield.

A funny result as well in that Bottas, Hamilton, Verstappen utterly failed to convey just how dramatically close it was looking at the front. Leclerc in P4 was clearly its own reward for those who had maintained the faith, even with a bit of an assist from the weather. A bit of a disappointment then for Albon, but he was inside half a second on his teammate as the gaps between the two continued to narrow.

The Renault teammates were just a wee bit closer, with Ocon just 0.019 seconds back of Ricciardo, though Danny Ric's spoiled first lap spoke of time that might have been left on the table. Norris, Perez and Sainz rounded out the top 10 and it looked like the die was cast.

On pace then the battles seemed to shake out into three main groups, at the top Mercedes versus Max, then Leclerc through Ocon and finally the Norris, Perez and Sainz trio. Of course, the start offers every opportunity to jumble that up and those starting behind would also very much want to have their say. Pole position is generally not worth as much here as at many tracks and hey, what about the rain that's potentially on its way for tomorrow's race. That oughta spice things up a bit. And even if it doesn't, keeping the tyres from graining will be the focus of all the teams, but particularly Mercedes as Hamilton mentioned managing the tyres well in the opening phase of the race as being absolutely critical.