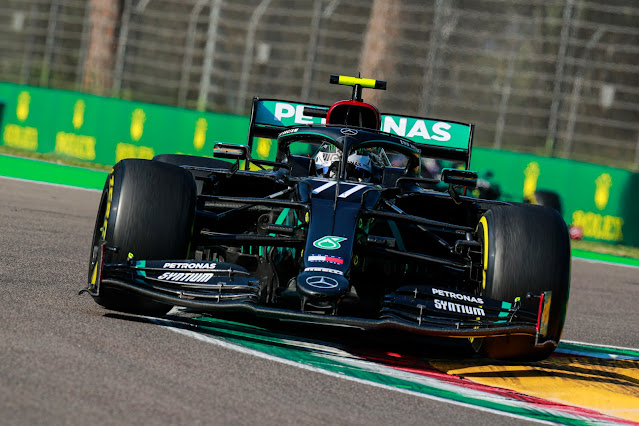 A remarkably glorious day, sunny blue skies with a faint haze in the distance hanging beatifically above the paddock, whose multitudinous inhabitants were scurrying about, desperate to complete a day and a half's worth of tasks in the waning minutes before qualifying kicked off in this somewhat experimental 2 day Grand Prix.

The top of the only free practice session suprised absolutely no one, with Hamilton, Verstappen and Bottas in that order but the field beyond looked entirely up for grabs with P4-P10 covered by less than half a second but the timing of the runs and fuel loads entirely unknown. Latifi had a brake by wire issue that limited his running for what that's worth and unlike Portimao, the surface of the track was being much more cooperative with the tyres, with the Softs yielding the fastest times but the Medium looking to be preferred in the race.

Green Light!! Magnussen and Latifi were the first to dip their toes into the water with Russell deciding it looked OK shortly thereafter and leading off a general plunge of the midfielders, minus Renault and McLaren who looked to be waiting for the big boys. By dint of going first, KMag did claim the top spot momentarily and was able to fend off the challenge from Latifi before the rest of the times started rolling in. As Russell rounded the penultimate turn Hamilton, Bottas, Norris and Ocon wandered out of the end of the pitlane, followed by Verstappen at a bit of a distance.

As the dust settled on the first round of hotlaps it was Kvyat to the top, with Verstappen dropping in just behind him by less than a tenth. Hamilton was sitting atop the mountain as he crossed the line, with Gasly and Norris rounding out the top five.

Bottas backed off his lap and as the times hit the board, Ricciardo rather suspiciously remained in the pitlane. On his second go, Leclerc jumped to the top briefly, before Hamilton, Bottas and Verstappen got themselves sorted out and carried off the top 3 spots. The pattern seemed to be 2 hotlaps on the Soft tyre, and with just 8:30 left in the session, Ricciardo finally emerged from the pits. Albon was struggling with the front and asked for 3 clicks less on the front wing, and Red Bull seemed disposed to grant him that, but not till after he boxed for his second set of tyres.

Renault said the Ricciardo timing was not driven by an issue and both Bottas and Albon had their laps deleted for exceeding track limits, dropping the pair to the end of the field with just 5 minutes left. Ricciardo's first go put him P11, two spots back of his teammate and as the teams retired to the pits to get ready for the final tilt at the glories of Q2, it was Latifi, Magnussen, Raikkonen, Albon and Bottas on the outs looking in with Giovinazzi and Grosjean lined up to be sacrificed should Albon and Bottas prove able to drive round the track within the white lines...

3 minutes to go and it was all on, all the drivers out on outlaps. Bottas rocked up to P2 with Albon going P7 which knocked out Russell and Ricciardo. Renault had their drivers out late and Ricciardo looked to have only a single shot at making Q2. Ocon was out late too, and he was just in front of his teammate. Magnussen took the grasscutting line out of the penultimate turn spoiling his effort. Ocon went P7 as Stroll failed to improve and Ricciardo went P11 and with Latifi not a threat the Racing Point driver just squeaked by Grosjean, kept out of the dropzone only by the grace of Raikkonen's time for P11 being deleted for track limits. Grosjean, Magnussen, Raikkonen, Latifi and Giovinazzi went no further, then, off in search of some ragu to mend their souls as the rest turned it round for Q2.

Vettel and Kvyat led the way into the second session, with Gasly, Leclerc, Russell, Hamilton and Bottas following on, with Ferrari, Mercedes and Red Bull all choosing to have a go with Mediums first up. Gasly was quickest of the first set, until Bottas got the better of Hamilton, with the top 7 all into the 1:15s and only Vettel odd man out. Oh dear, Verstappen on the radio with no power and he was straight into the pits as he couldn't get it going, out in P10 with more times incoming.

AS the rest of the field wheeled in, it was Gasly in P3 thanks to the Verstappen issue, followed by Ricciardo and Norris rounding out the top 5. 7 minutes to go and as the inlaps trickled by, it was Albon, Stroll, Russell, Vettel and Verstappen on the outside looking in. On replay, Albon had a spin out of Turn 15 as the teams turned it round for the final go at the hallowed ground of Q3. Red Bull said it was a spark plug issue for Verstappen, and they were optimistic they would get him at least one more chance.

Ocon was out early to have a go, looking to improve his P8 and get a bit closer to his teammate in P4 and as he circulated, Kvyat, Gasly, Vettel and Leclerc were next off the mark. No improvement for the Renault driver, however, as a slow first sector tanked an otherwise decent effort. Red Bull got the job done and Verstappen was out on a set of Mediums to have a go with just under 2 minutes left in the session.

Sainz improved which put Ocon into P10, and then Verstappen went P4, before Albon and Ricciardo dropped him 2 spots, with Albon having been chucked onto a set of Softs to ensure he progressed. Going no further were Perez, Ocon, Vettel, Russell and Stroll, off in search of some limoncello to wash the bad taste out of their mouth as the rest turned it around in search of the ultimate palmares of Q3. Vettel had his lap deleted which dropped him back of Russell, as Stroll had his lap deleted as well and occupied the bottom spot. Bottas, Hamilton and Verstappen were all through on the Medium tyre and would thus be starting with that tomorrow with the rest of the top 10 lining up on the traditional Soft tyre.

Sainz was first to break the silence in Q3, followed rapidly by Kvyat, Gasly, Hamilton, Bottas, Ricciardo and Verstappen. After a decent wait, Albon led Norris and Leclerc out as on replay it looked like Renault released Ricciardo right into Verstappen's way, but all it led to was some complaints on radio. Despite Bottas purpling the first two sectors, with a purple third Hamilton took the battle of the bankers, by the infinitesimally small margin of 0.031 seconds, recording a 1:13.781. Verstappen went P3, nearly 0.7 seconds back, followed by Gasly, Albon and Leclerc. Ooops, no sooner said than deleted as Albon was kicked to the kerb by the stewards for track limits yet again.

That done, everyone from Leclerc down moved up, at least temporarily, with Ricciardo and Sainz out on used tyres and thus hanging out in P8 and P9 respectively as the drivers retired for the interval and the teams got ready for the last chance lottery at the top of the mountain.

Kvyat led the way with 3 minutes left, with Sainz, Albon and Ricciardo rolling out rather gingerly behind. Norris, Gasly, and Hamilton were next, with Bottas and Leclerc tailing them. Verstappen was last to go, easily 30 seconds back of Leclerc and the final moves had been made as the teams waited breathlessly to see how their drivers fared.

Early days it was Bottas taking sector 1 over Hamilton by the barest of margins. Sector 2 continued the trend and as Lewis laid down a 1:13.706 it was Valterri, finding that special something in the final sector and rocking up with a 1:13.609, taking pole position by a solid tenth over his teammate. Ricciardo on his new tyres improved to P5 with Albon dancing into P6, 0.4 seconds off his teammate. Leclerc, Kvyat, Norris and Sainz rounded out the top 10 with Gasly confirming his P4. Remarkable result for Alpha Tauri, especially Gasly who has absolutely gotten the puzzle put together this season.

Tomorrow's race will be interesting as overtaking at Imola has long been regarded as a challenge, even before the age of F1 cars the size of SUVs. DRS plus a tow might just do the trick but there will be extra emphasis on the start, especially for the midfield teams desperate to gain places before being stuck into a train. According to Hamilton, the delta for overtakes was nearly 2 seconds and it was going to be very much down to strategy and tyre management. That should prove interesting as the two Mercedes battle for the win, assuming they don't get the bum's rush from Max on the very long run down to Turn 2 (technically there is a Turn 1 but it doesn't have a braking zone). Those running the Soft at the start of race also potentially have the advantage for a few laps, which could liven things up a bit, and there will certainly be a sortie of Medium clad midfield drivers, led most likely by Perez and Ocon, trying to create chaos amongst those ahead as the Softs start to degrade. Even still, for maximum enjoyment live timing is highly recommended as the race is very much going to be down to drivers carving chunks of time out of each other and trying to prompt their rivals into a mistake, especially thoughout the last complex, Turns 17 and 18. Red Bull supposedly closer on race pace but, well, we've also heard that one before...